As we can see in the list above, diesel is not offered in the base S variant, and automatic is exclusive to the petrol engine. Also, the petrol ZX is offered only with the CVT. The reason Honda said, is to offer more ‘exclusivity’ to the customer.

Features
Moving on to the exterior features, LED headlamps and LED fog lamps are limited to the top end VX and ZX trims. Lower variants get halogen headlamps, and only V gets halogen fog lamps. However, LED DRLs have been made standard across the range. The top-end ZX gets LED rear combi lamps as well. Electric sunroof with one-touch open/close is limited to the VX and ZX trims as well. While the V variant gets 15-inch diamond-cut alloy wheels, the VX and ZX gets 16-inch diamond-cut alloys. The lower variants get 15-inch steel wheels with covers. Except for S, all variants get ORVM integrated LED blinkers. 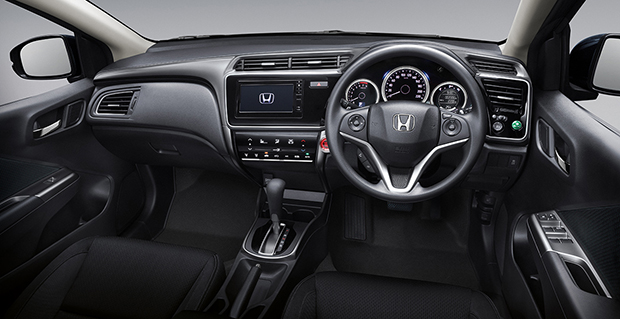 On the inside, V, VX, and ZX get a 7-inch touchscreen infotainment system with navigation, voice recognition and reverse camera view, while the lower trims get a 3.5-inch LCD screen with Bluetooth telephony. Similarly, the S and SV get 4 speakers, and the rest V, VX, and ZX get 8 speakers. Except for the base S variant, rest all get automatic climate control with touch control panel, cruise control, driver seat height adjustment, power folding mirrors, and a customizable auto door locking feature. One-touch driver auto up/down power window is standard across the range too. While tilt adjustment for the steering is standard, telescopic adjustment is limited to the top-spec VX and ZX trims.

Honda also said that the new City has already garnered over 5,000 bookings, out of which 70% are for the petrol variants.