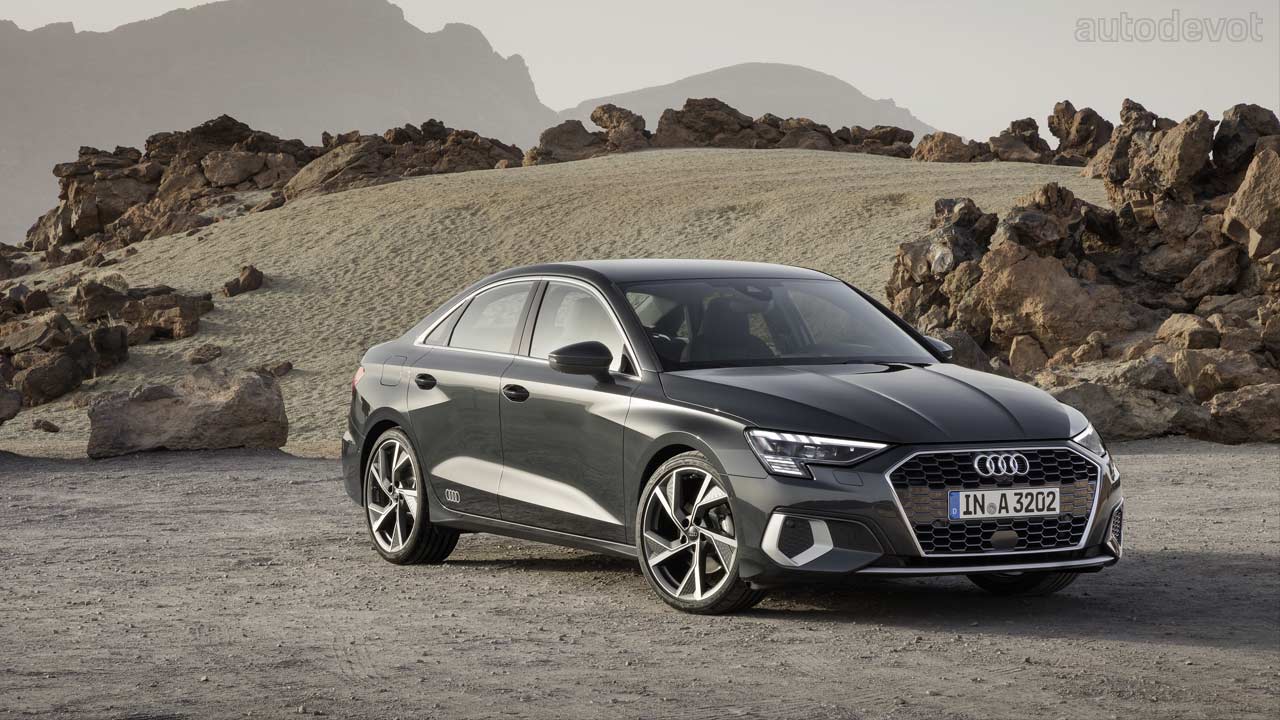 The 4th generation Audi A3 Sportback has now got a Sedan sibling. This, however, is considered as a 2nd generation model since the first two generations of the A3 didn’t have a sedan body style. 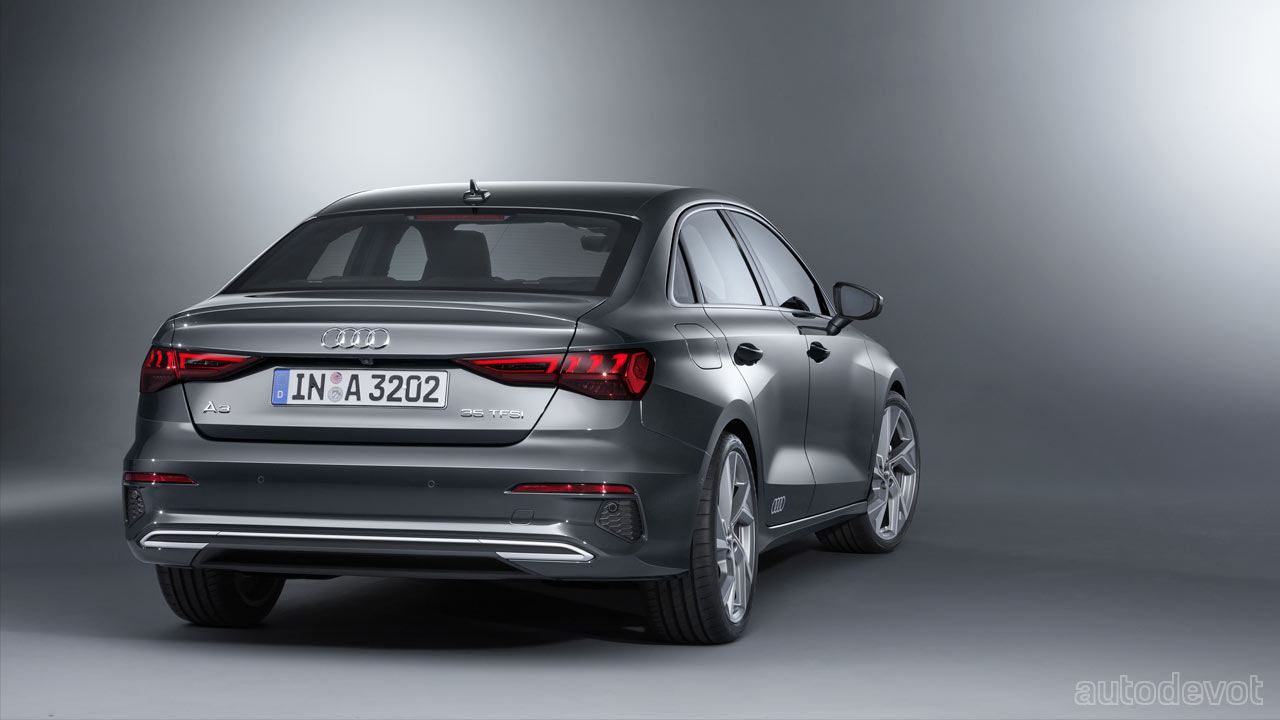 The styling is identical to its hatchback sibling, at least the front half of the car. The rest of the car borrows the lines and curves from its bigger siblings in the family. My personal favorite styling touch is the rings logo on the rear doors, which adds a touch of sportiness. The wheel design is identical to the ones on the hatchback. The rear-end also has a subtle, integrated tailgate spoiler. 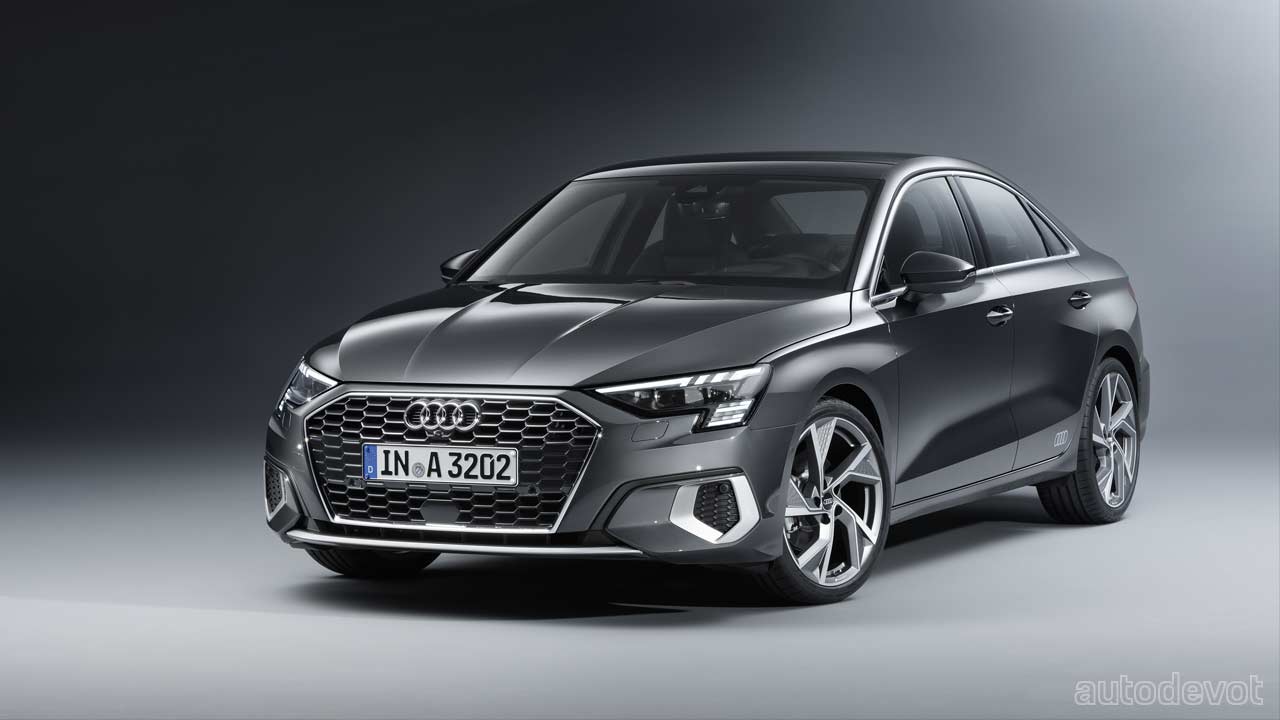 Notice the concave surface on the doors, which creates an intense play of light and shadow. As for the exterior features, the range-topping model gets Matrix LED technology for the headlamps; they consist of a pixel array made up of 15 LED segments that can be actuated individually for a specific light signature depending on the chosen variant. 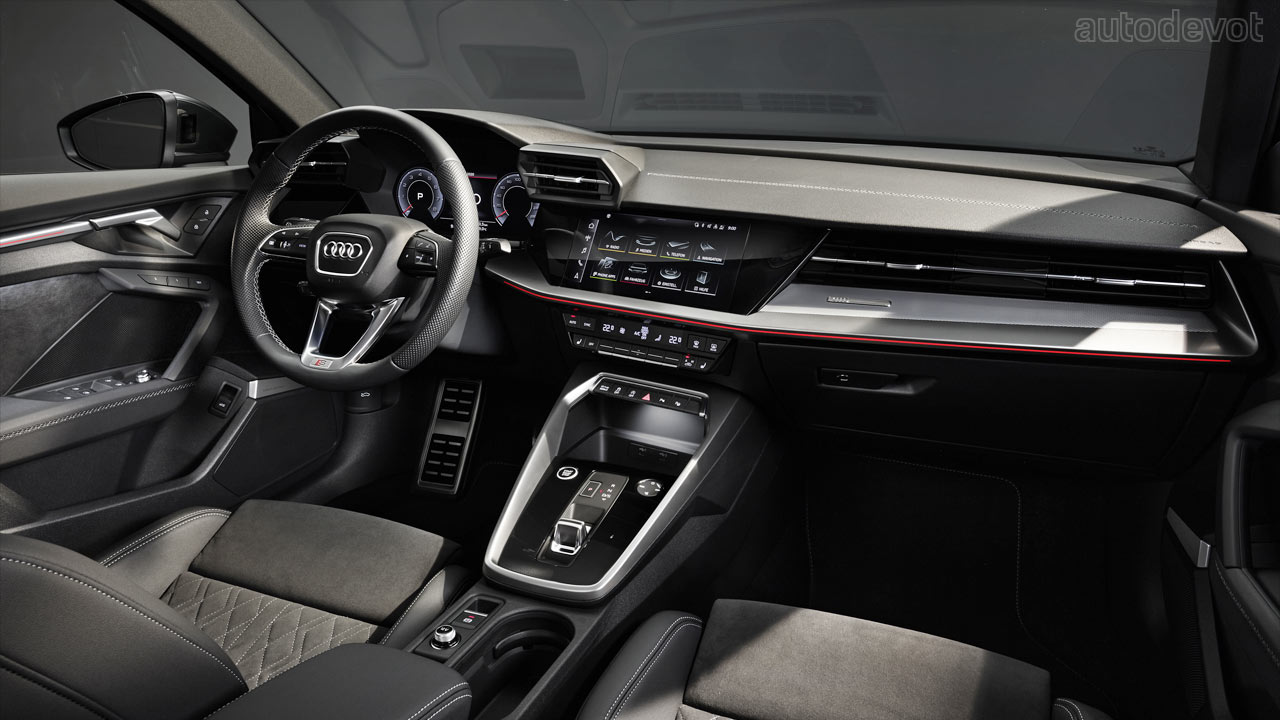 Inside, the dashboard and layout are nearly identical to the one on the new A3 Sportback. Thanks to that 1 cm increased height and lower positioning of the driver seat, the headroom is up by 2 cm at the front.

Features include a 10.25-inch digital instrument cluster and a 10.1-inch MMI touch display with handwriting detection. Buyers can opt for a 12.3-inch Audi virtual cockpit plus, a head-up display, and MMI Navigation plus. 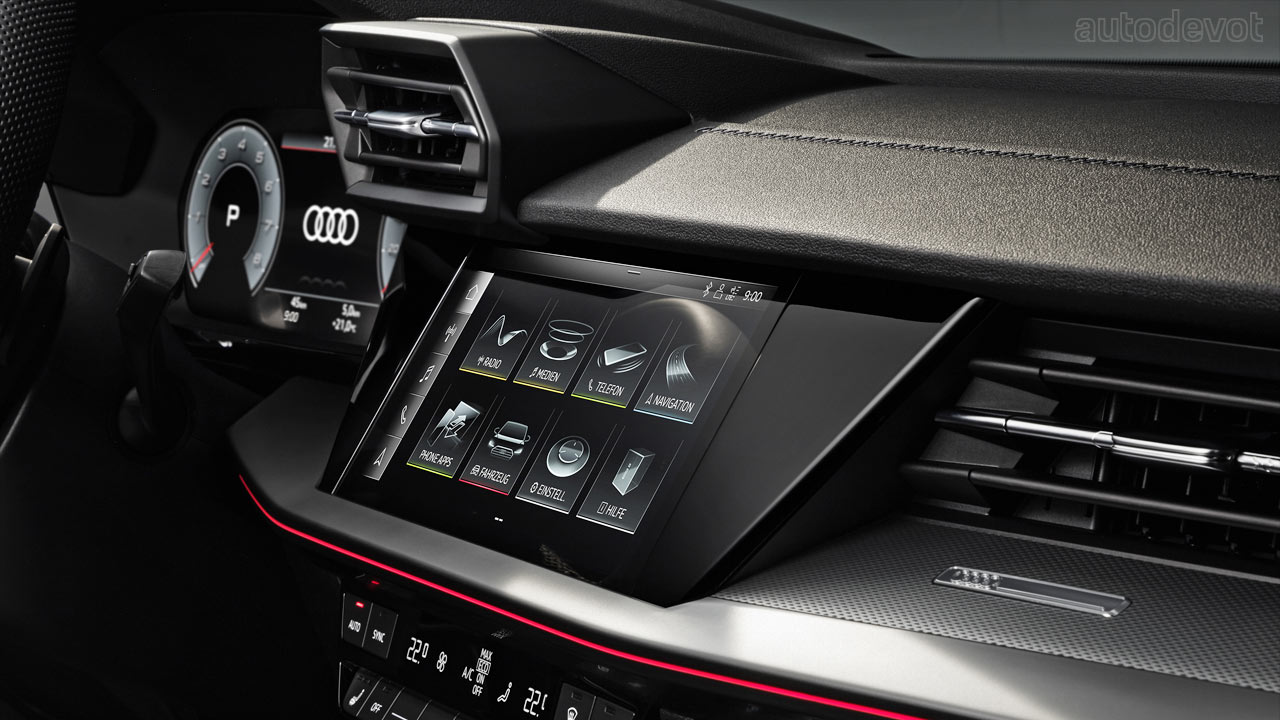 The MMI Navigation plus uses the third-generation modular infotainment platform (MIB 3). The MIB 3 boasts computing power 10 times higher than in the predecessor model, connects the car via LTE Advanced speed, and connects the passengers’ smartphones to the internet via Wi-Fi hotspot. The MMI Navigation plus offers a multitude of Audi connect services as standard, including online traffic information, news, and additional information such as photos, opening times, and user reviews relating to points of interest.

The Car-to-X services that make use of the swarm intelligence of the Audi fleet are also part of the connectivity services.

The A3 Sedan can be locked/unlocked as well as started via an Android smartphone with the Audi connect key. Personalization allows up to 6 users to store their preferred settings in individual profiles, including those for the seat, climate control and media. 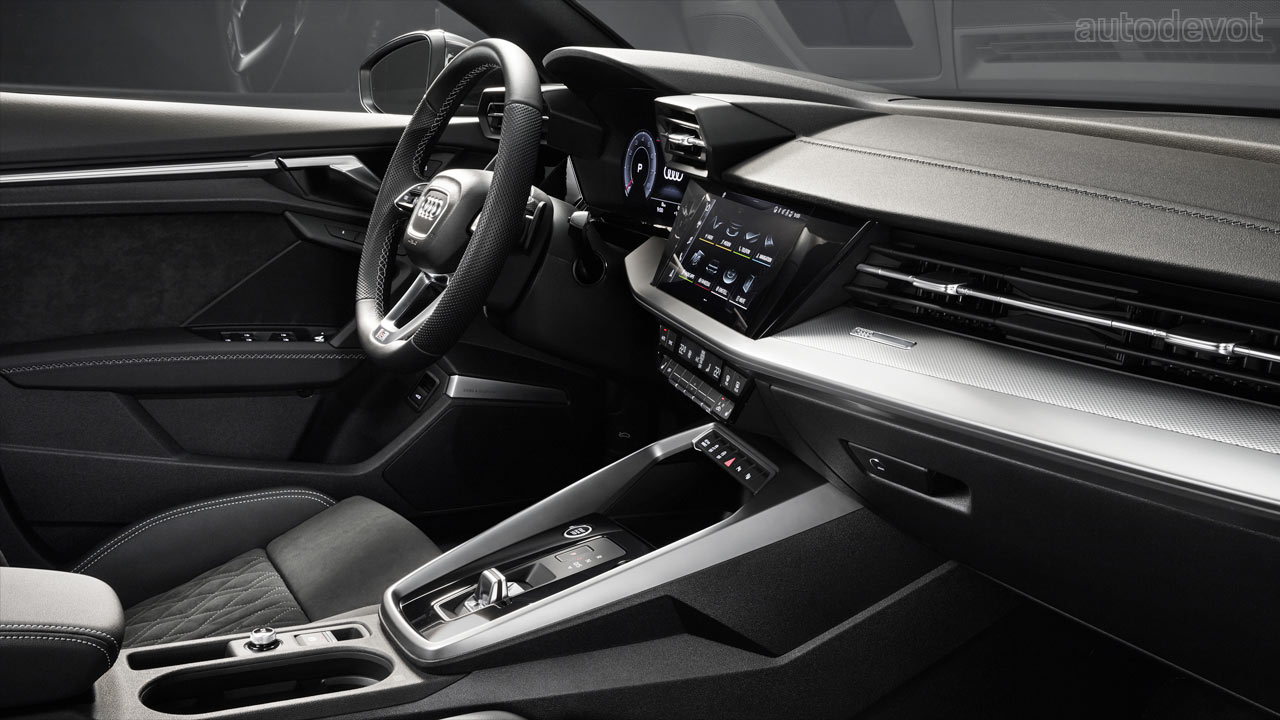 In the Audi pre sense front system, the camera behind the interior mirror works together with the front radar to prevent accidents, or at least reduce their severity. The standard collision avoidance assist also uses the data from this sensor system. 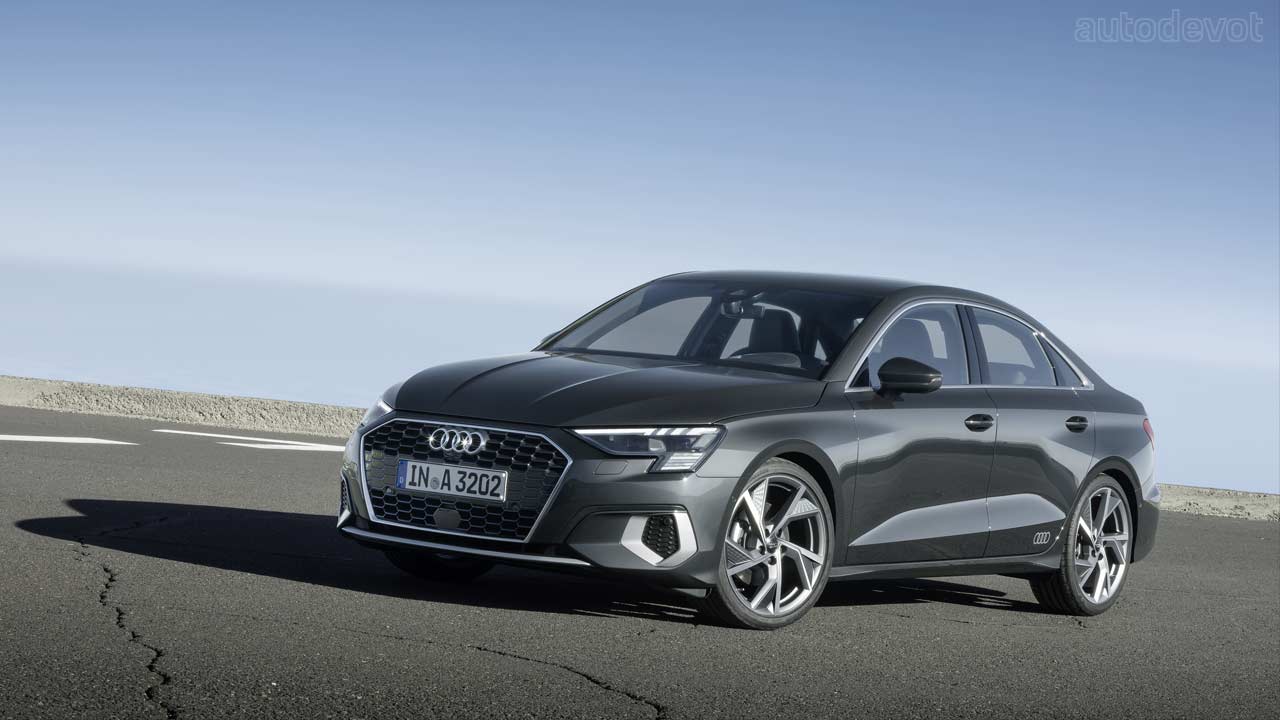 As for the suspension, Audi claims that it has been tuned to be “sporty and harmonious” – a touch more precise than in the predecessor model. As an alternative to the standard setup, there is a sport suspension and a suspension with controlled dampers. The latter offers a wide spread between highly comfortable roll motion and agile handling, Audi said. The Audi drive select dynamic handling system also allows the driver to experience different levels of suspension tuning. 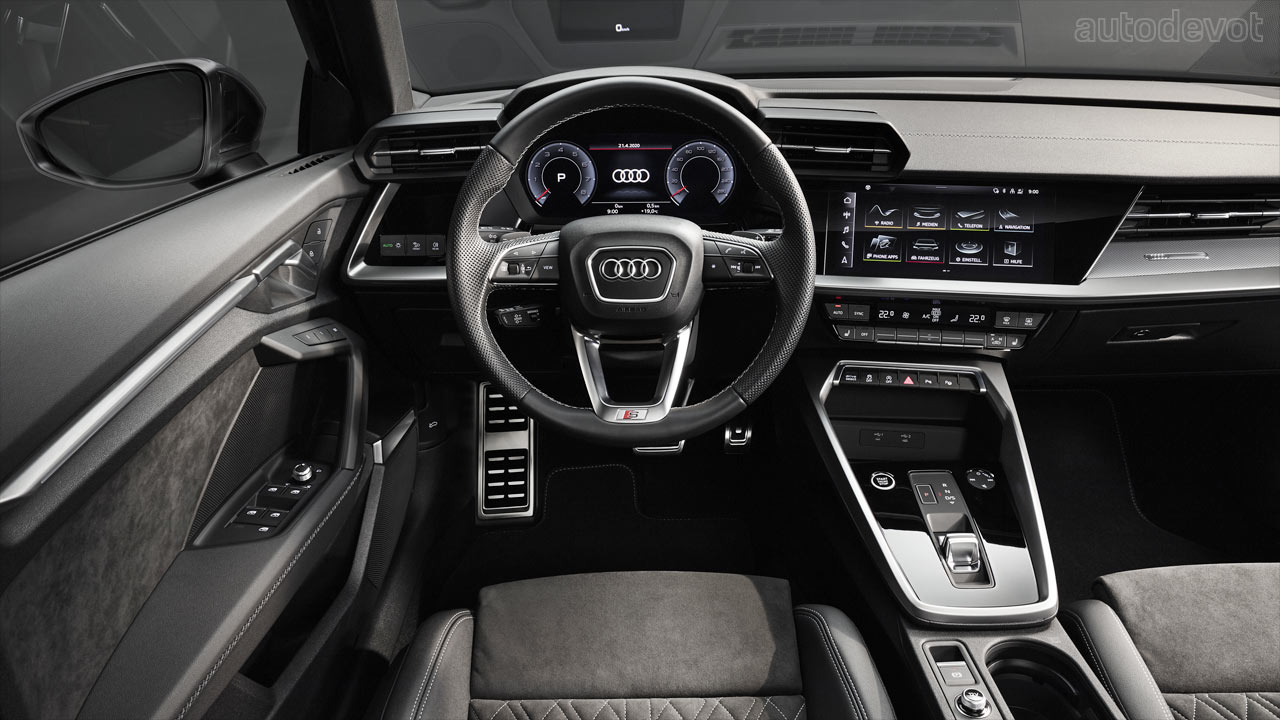 Moving on to the business end of the story, the new A3 Sedan is available with a choice of two TFSI engines and one TDI engine at launch. The 35 TFSI, a 1.5-litre petrol engine, produces 110 kW (150 hp) and is available in two versions: with a new 6-speed manual transmission and a 7-speed S tronic automatic. 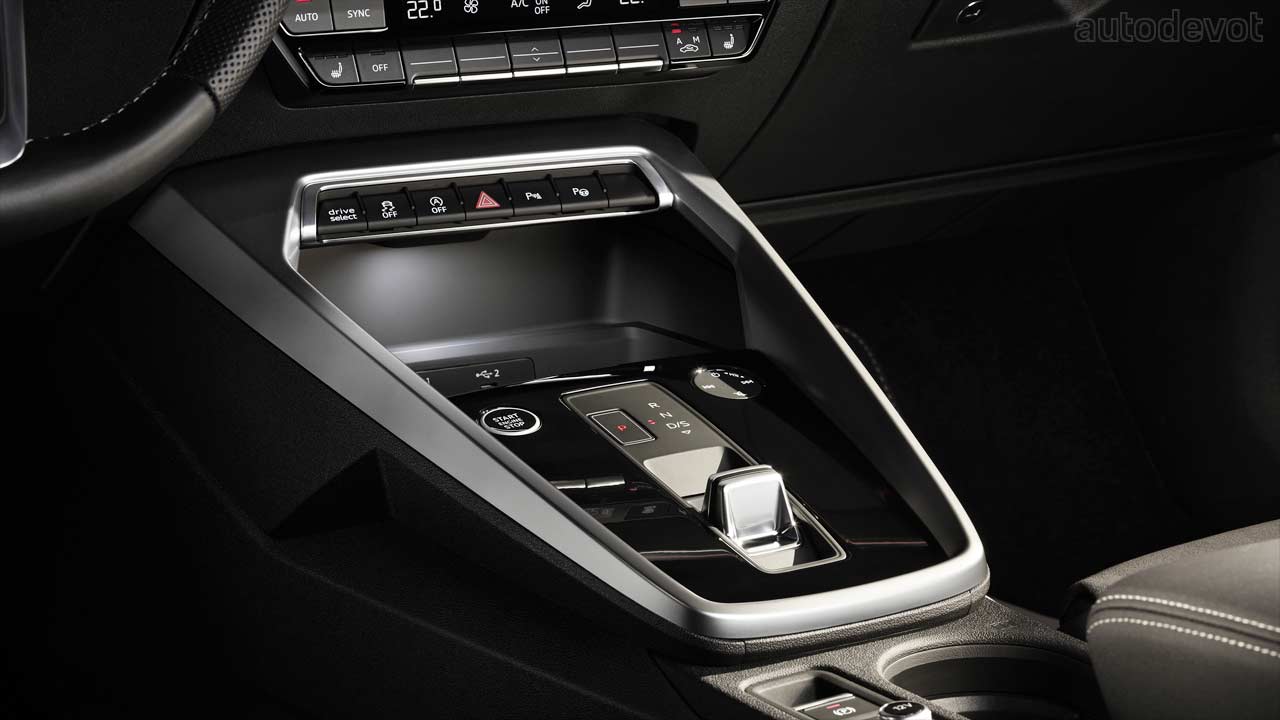 In addition to the cylinder on demand technology, the powertrain with the S tronic DCT uses a 48-volt mild hybrid system. It recovers energy during deceleration, supports the engine with up to 50 Nm (36.9 lb-ft) of torque when driving off and accelerating from low engine speeds and allows the car to coast with the engine switched off in many situations. In everyday driving, it is claimed to reduce consumption by up to 0.4 liters (0.1 US gal) per 100 km (62.1 mi).

The 110 kW (150 hp) 2.0-litre TDI diesel motor is paired with a 7-speed S tronic, where the gear shifts happen via a new switch that uses shift-by-wire technology.

Pre-sales will begin at the end of April 2020 in Germany and other European markets. Prices in Europe for the 35 TFSI start at €29,800. Shortly after the market launch, an entry-level petrol engine will follow with a list price of €27,700. 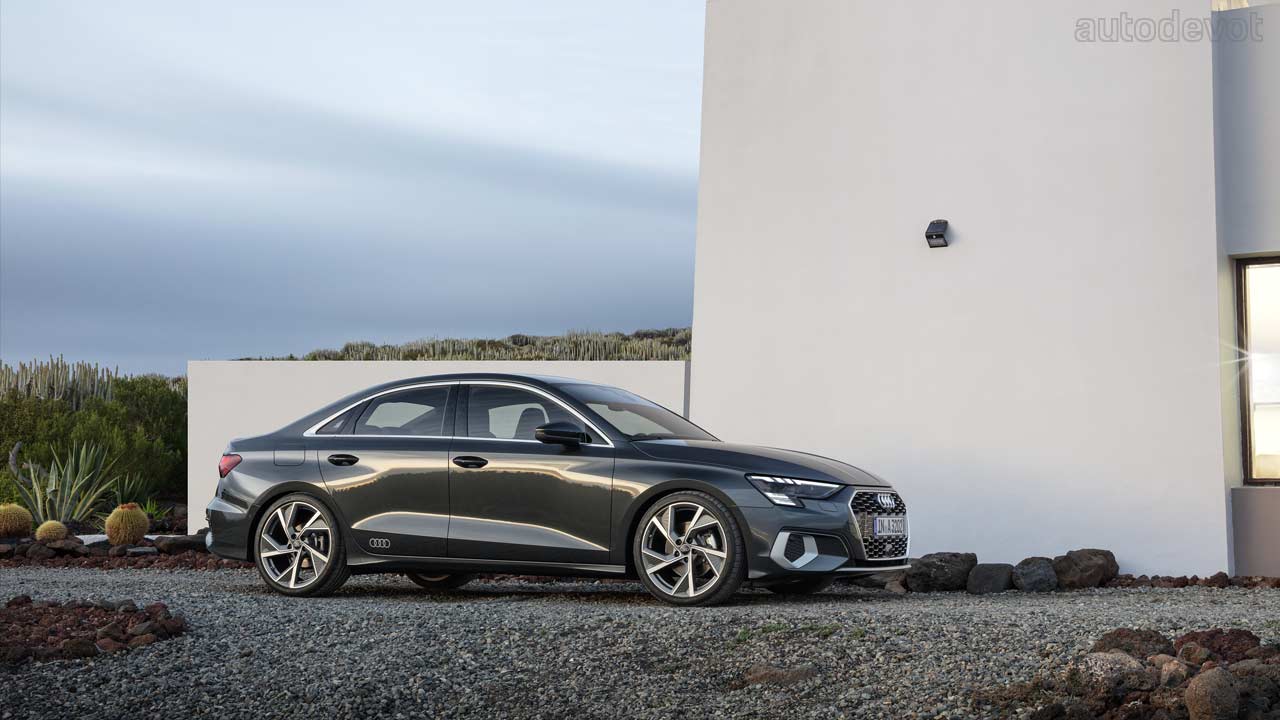 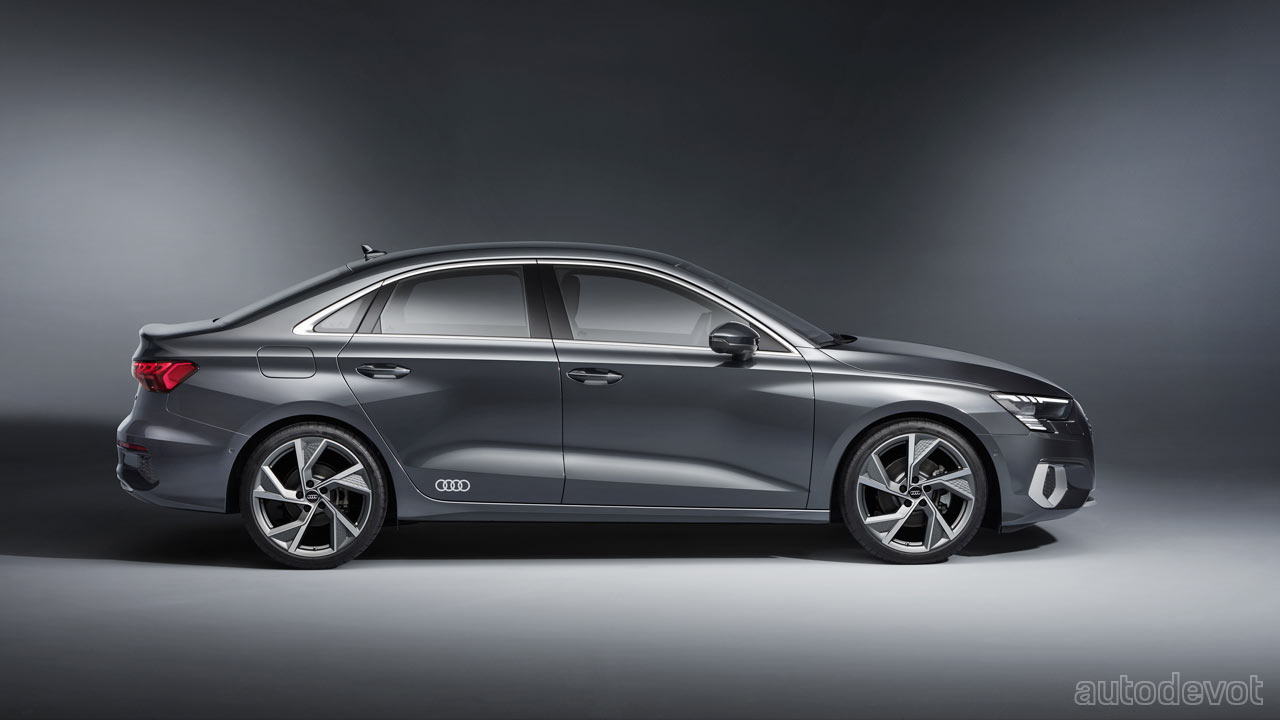 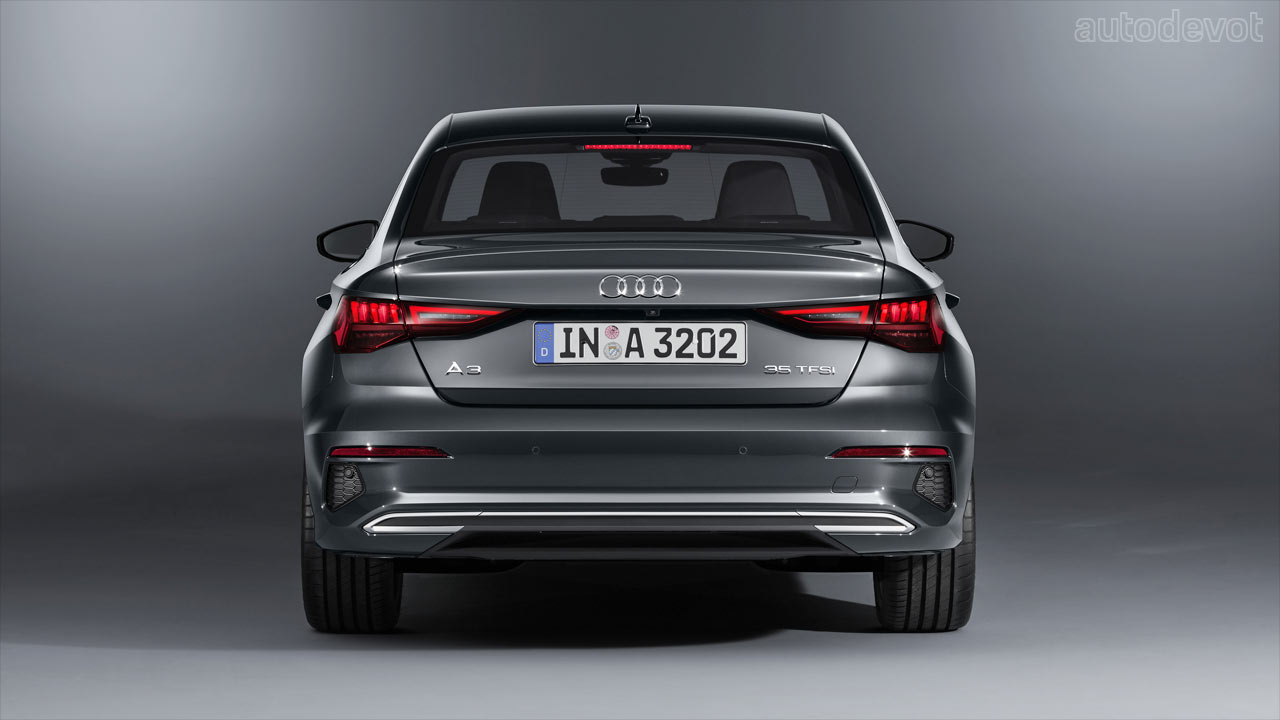 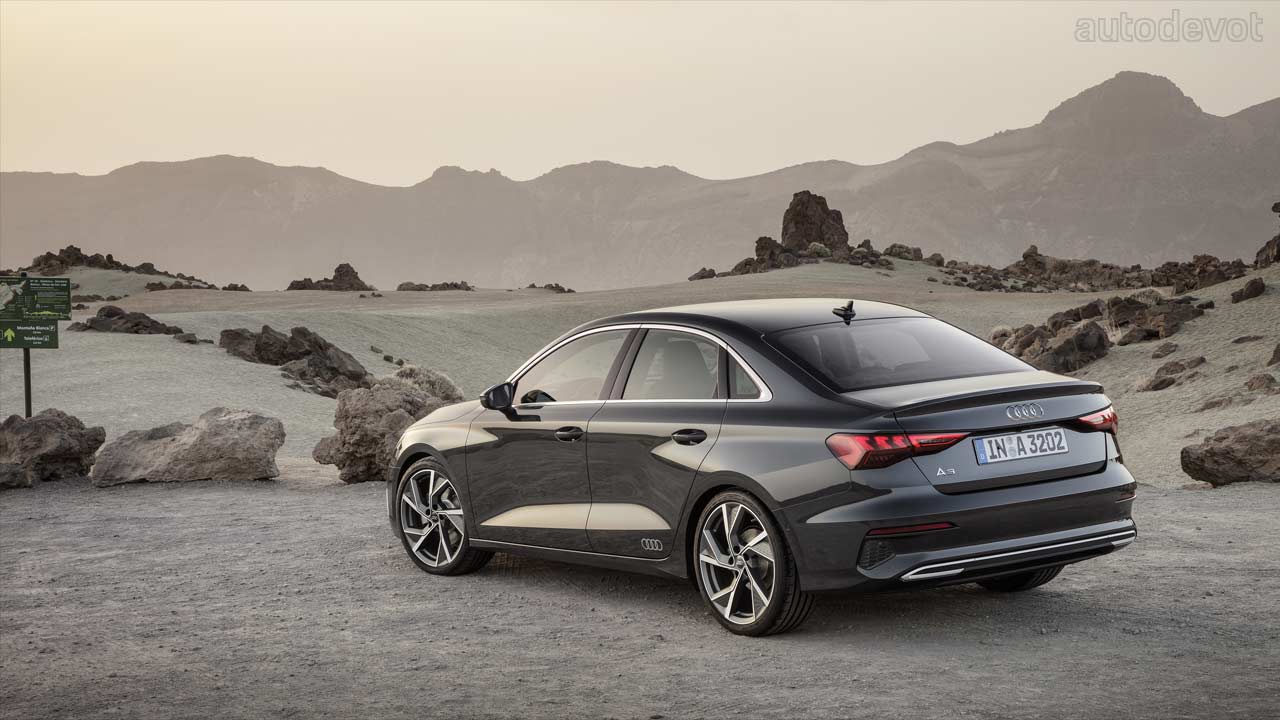