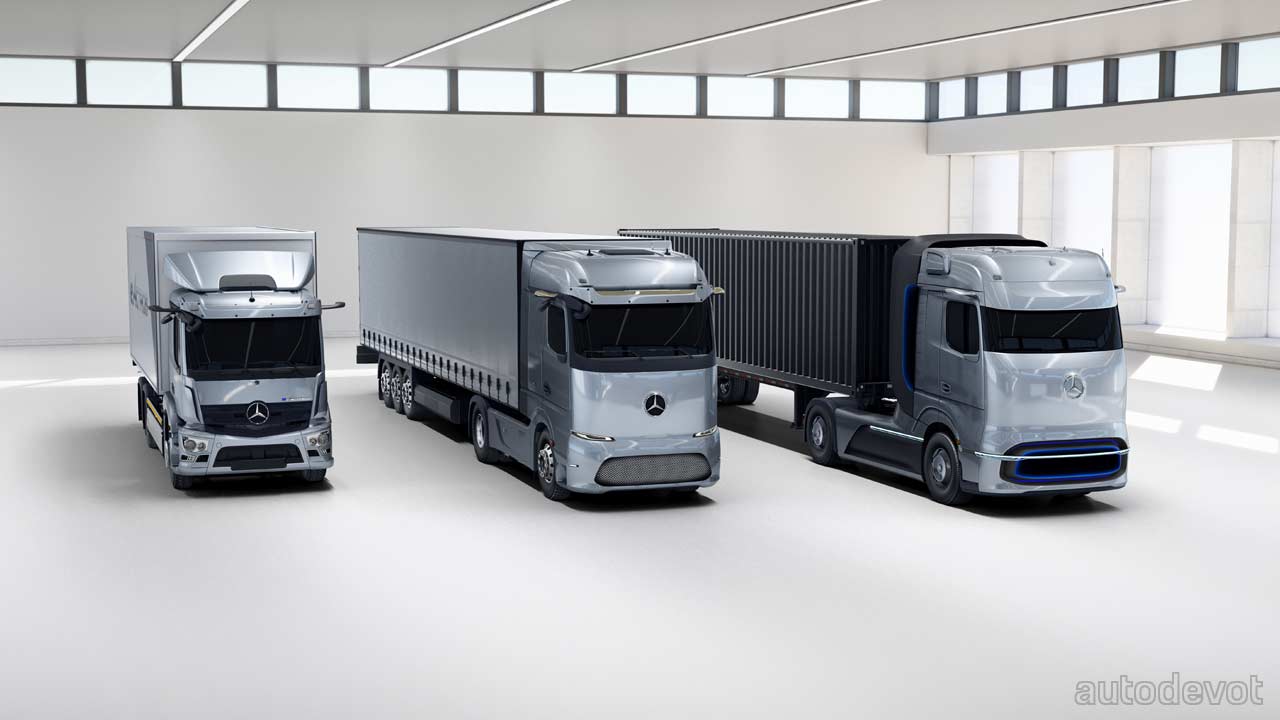 If you remember, there were reports in September last year that Daimler will take a break from ICE development to focus on electrification, including developing electric trucks. Well, there’s an update now. The company has revealed three trucks: Mercedes-Benz eActros, Mercedes-Benz GenH2 Truck, and Mercedes-Benz eActros LongHaul. The latter two are, of course, still in the concept stage. 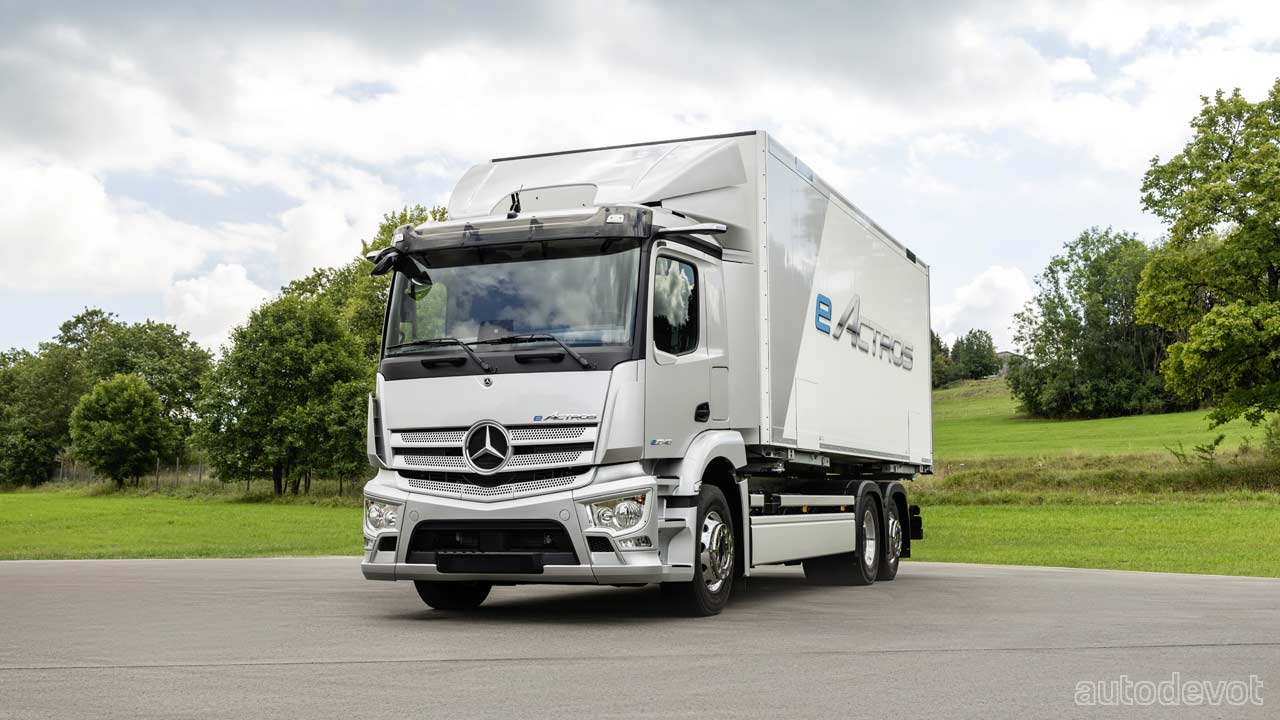 The eActros we’re seeing here is a battery-electric truck. It is being real-world tested by a few select customers since 2018, and will go into series production in 2021. Intended for urban distribution use, the eActros is claimed to offer over 200 km (124 mi) range. 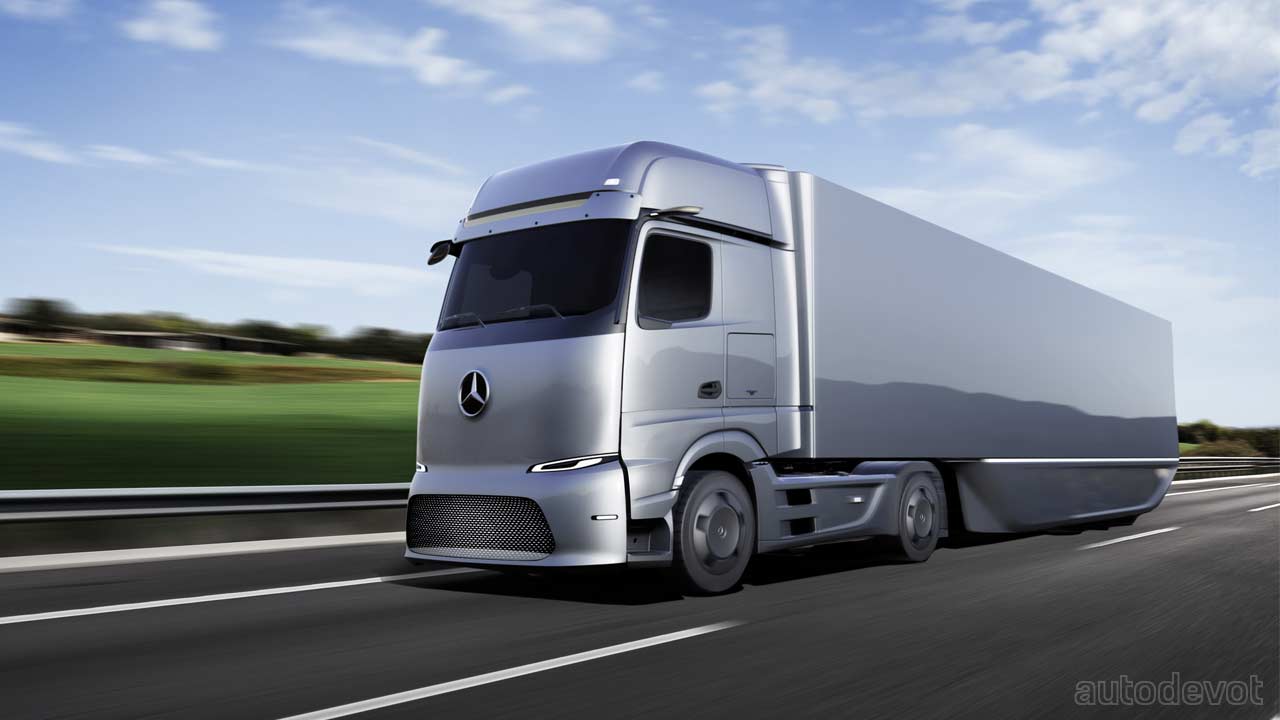 The eActros will be joined by the eActros LongHaul in 2024. It is, of course, a battery-electric truck with a claimed range of about 500 km (310 mi) that’ll rival the Tesla Semi (if it ever goes into production, of course). I personally think that the LongHaul looks better than the Tesla’s, especially the front fascia. The Tesla Semi looks more like a bullet train. 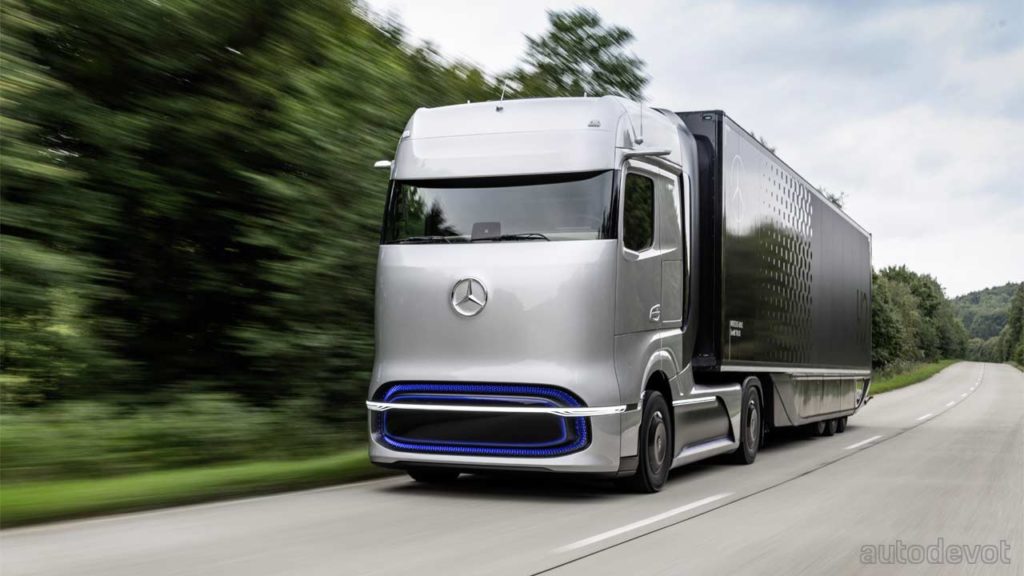 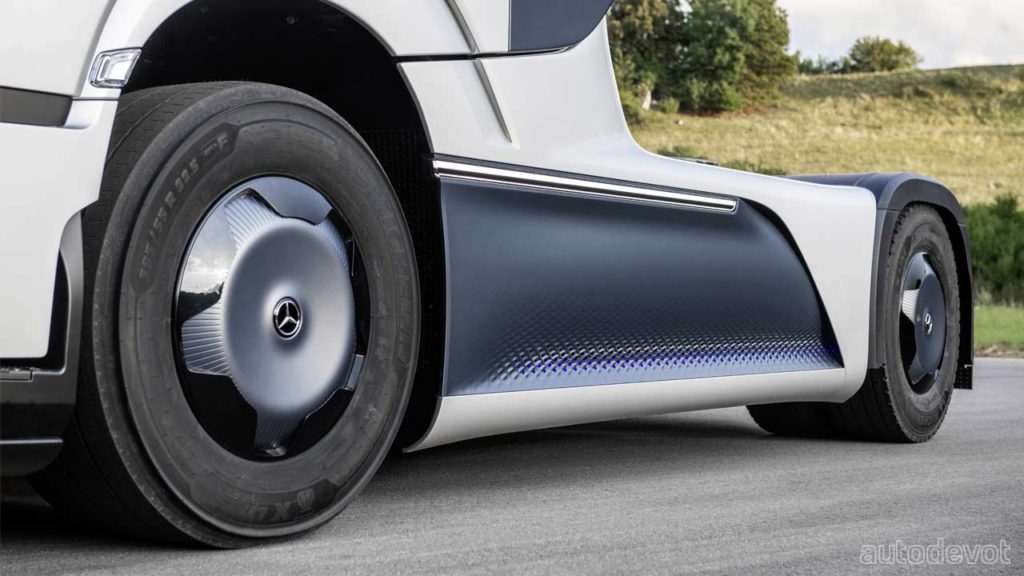 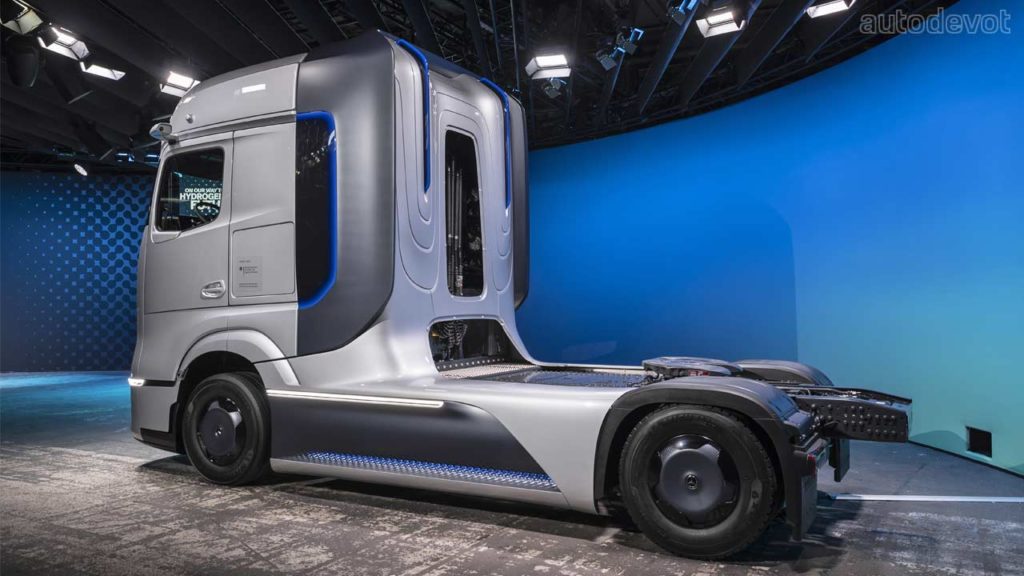 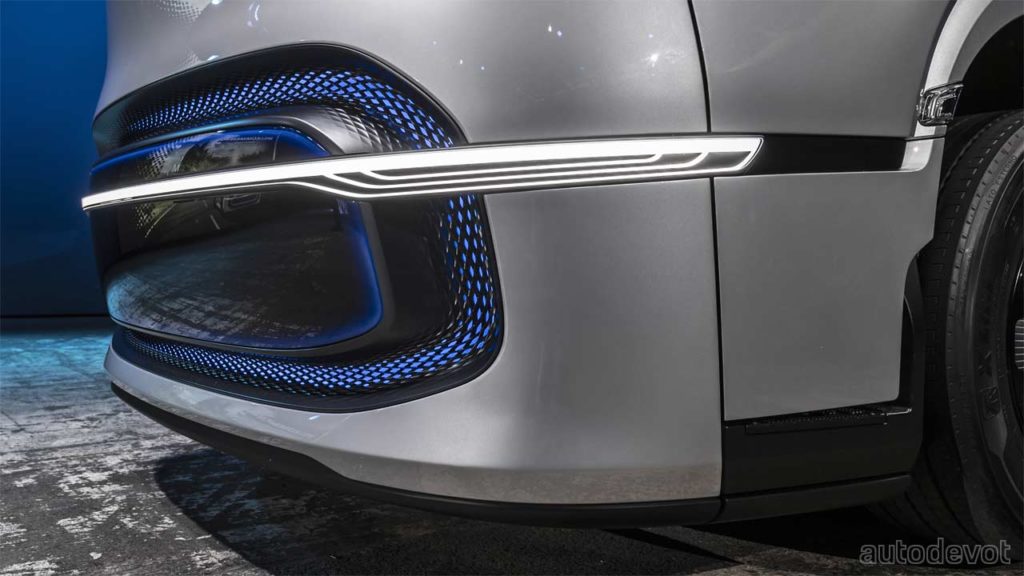 The third one is a futuristic-looking truck called GenH2, which is also of the same class as the LongHaul. The important difference is, of course, the GenH2 is a fuel-cell truck. Mercedes expects a range of up to 1,000 km (621 mi). Just as the company did customer trials with the smaller eActros, the GenH2 will also be real-world tested by a few customers starting in 2023, before going into series production in the second half of this decade. 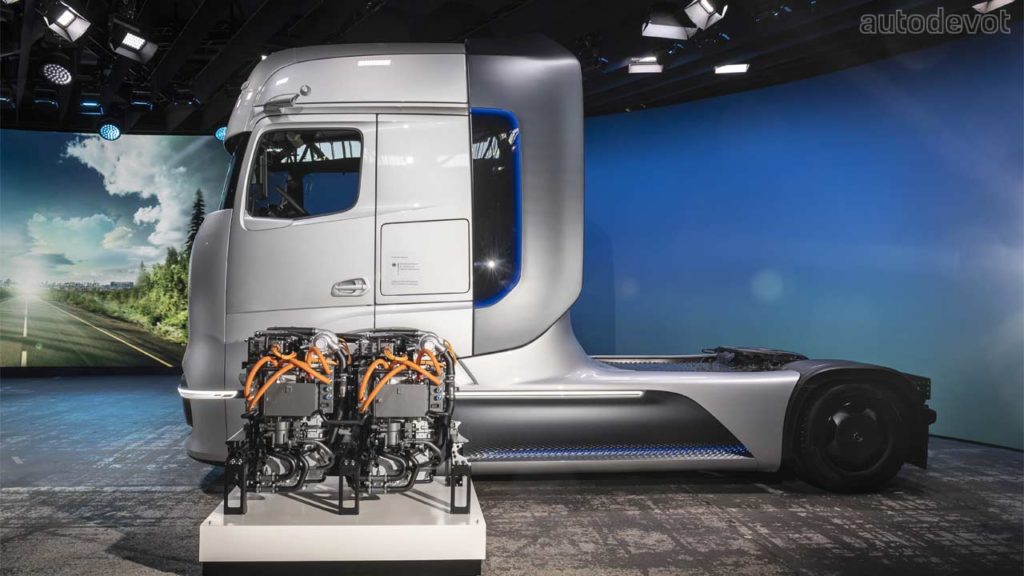 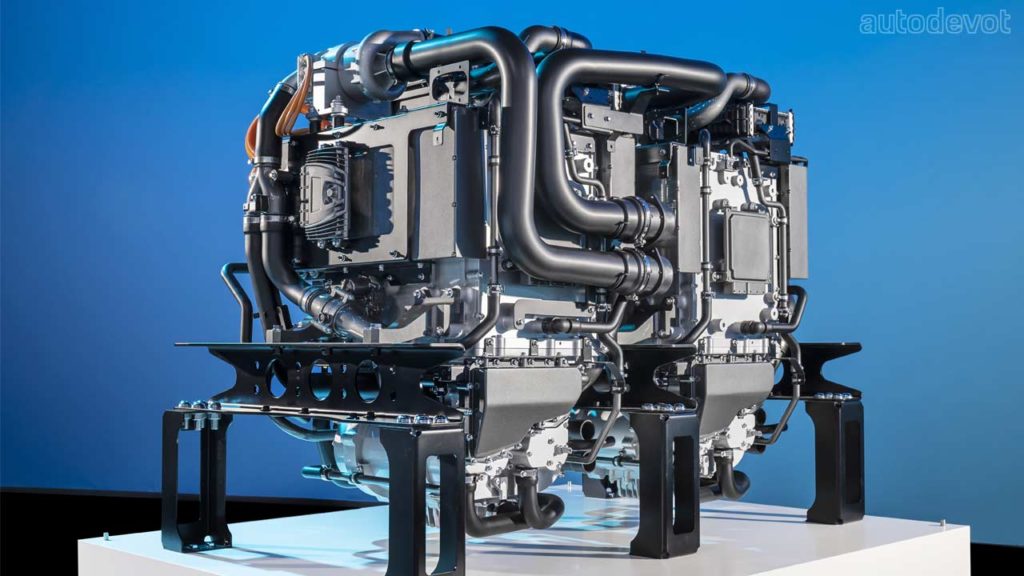 The series production GenH2 will have a gross vehicle weight of 40 tons and a payload of 25 tons. It’ll have two stainless-steel liquid-hydrogen tanks with a storage capacity of 40 kg (88 lbs) each. The fuel-cell system is to supply 2 x 150 kW while the battery will provide an additional 400 kW temporarily. The battery pack is of a relatively low 70 kWh capacity, as it is mainly intended to provide temporary supply such as while accelerating or while driving uphill fully loaded. The pre-production version will have two electric motors with 2 x 230 kW (313 hp) continuous power and 2 x 330 kW (449 hp) maximum power outputs; torque is 2 x 1,577 Nm (1,163 lb-ft) and 2 x 2,071 Nm (1,527 lb-ft), respectively.