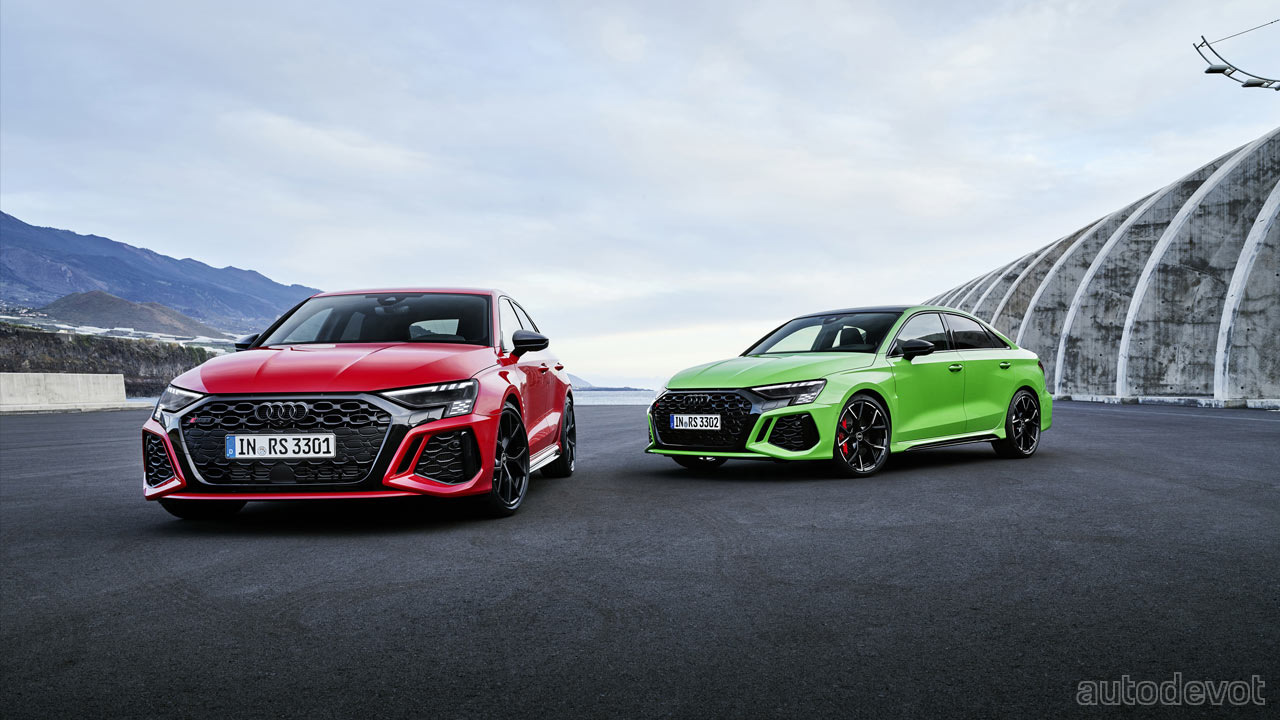 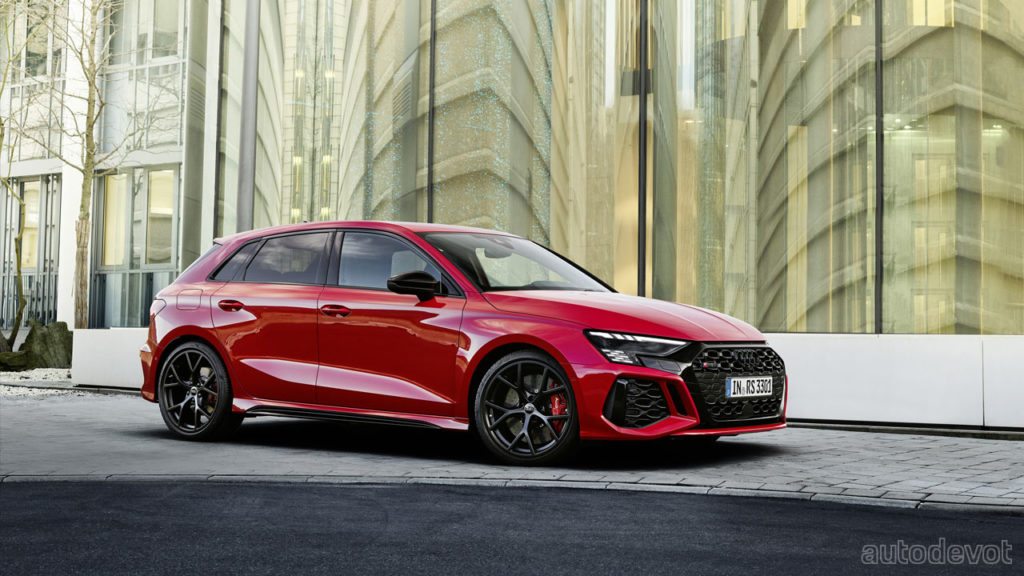 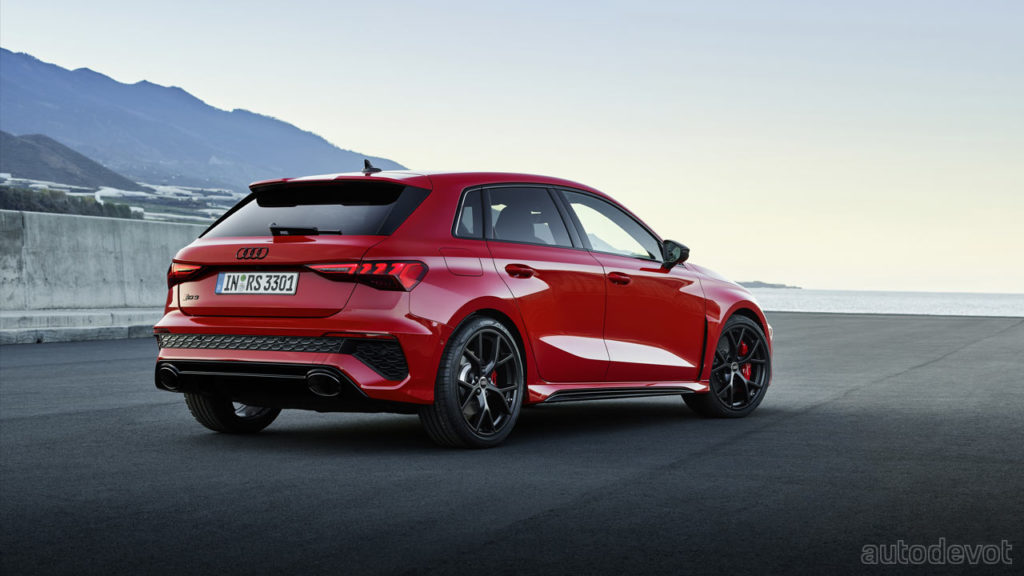 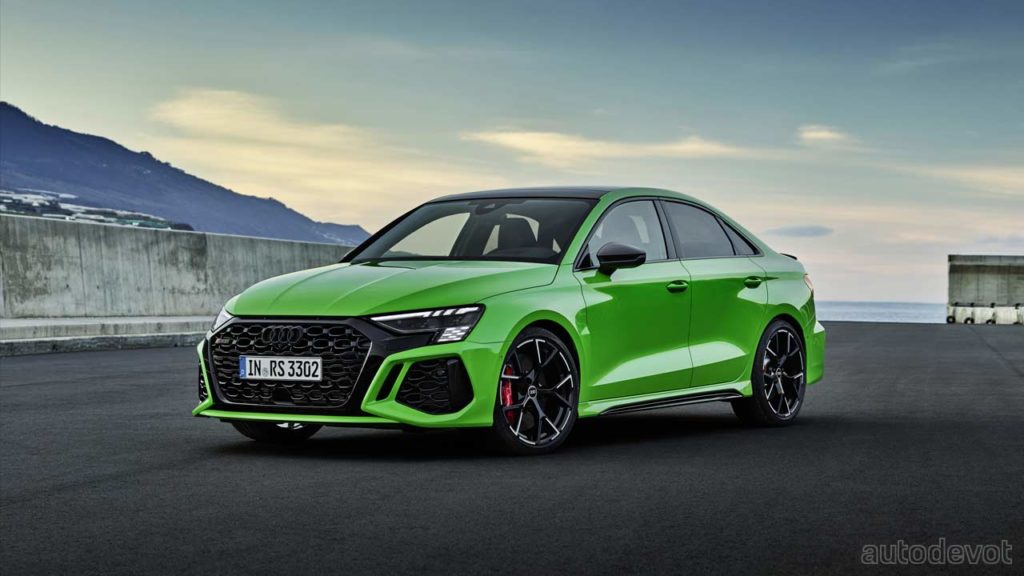 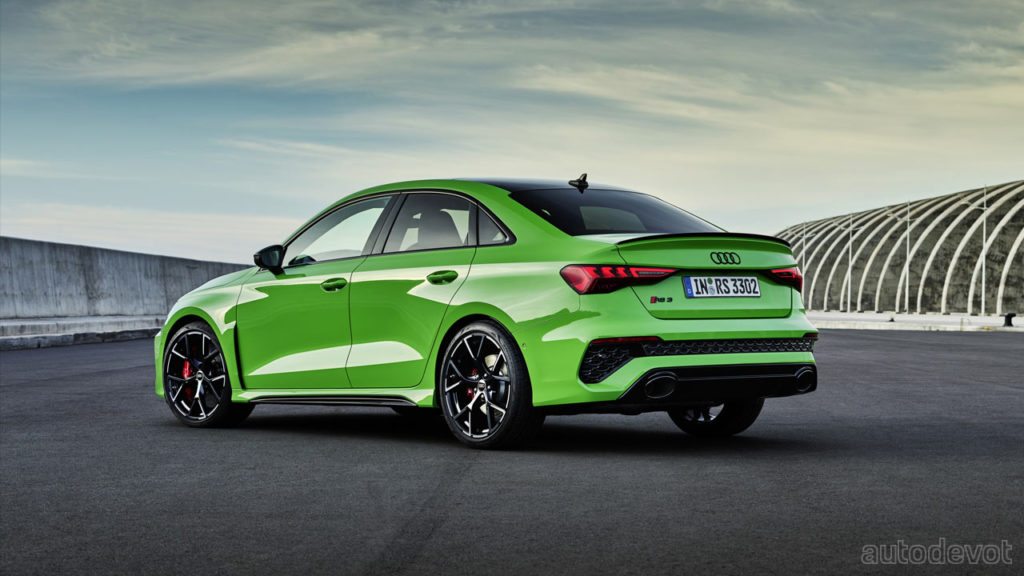 Let’s talk a li’l bit about the styling, because both cars look menacing AF (or “sick!”, if you prefer) especially in these paint finishes. Speaking of which, the Sedan is finished in ‘Kyalami Green’ while the Sportback on the other side is drenched in ‘Tango Red’. But what makes them look stunning are those contrasting black elements, especially at the front. The optional Matrix LED headlights also feature dark bezels. Notice the checkered flag pattern on the running lights for some extra drama. Full photo gallery here. 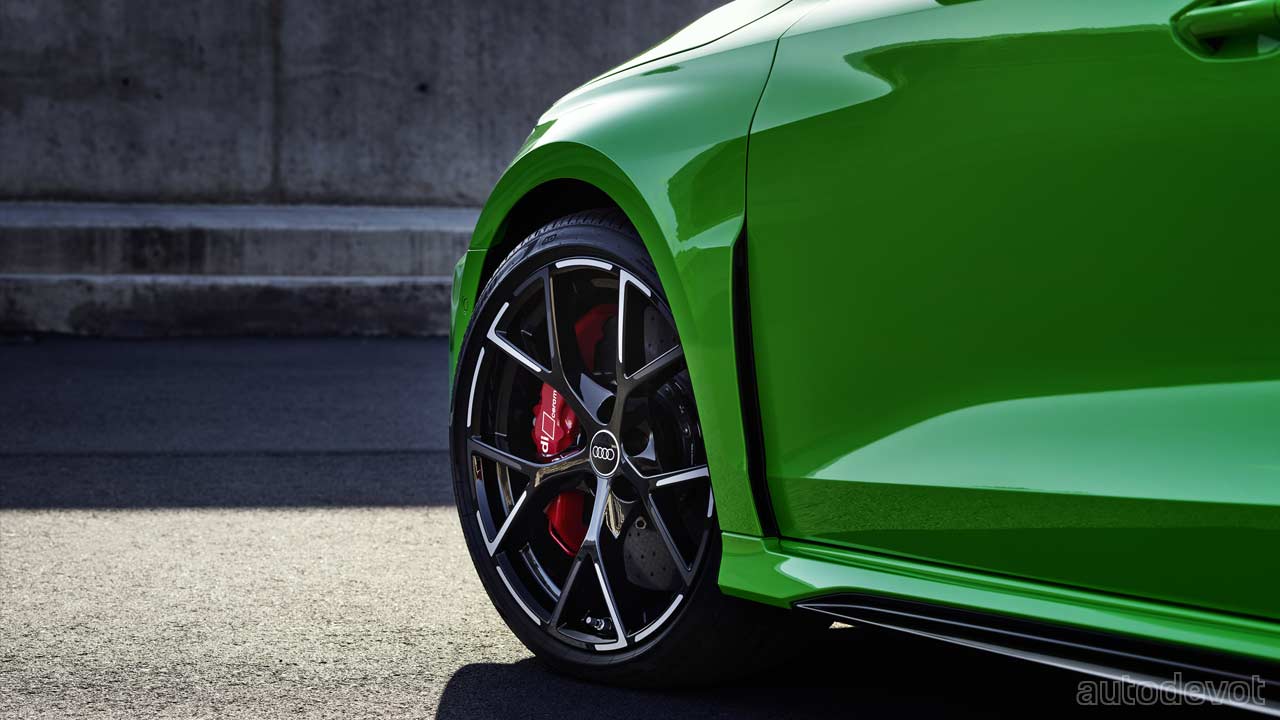 Those wheels look stunning too, aren’t they? As standard, the cars ride on 19-inch cast wheels in a 10-Y-spoke design. The ones featured above are the optional 5-Y-spokes. For the first time, Pirelli P Zero Trofeo R semi-slick tires are available in the options list. Buyers can also go for the ceramic brake system that is claimed to be 10 kg (22 lbs) lighter than the standard steel brakes.

As you can tell from the photos, the cars are wider. The front track, for example, is 33 mm wider compared to the previous model. Speaking of the front axle, the negative camber has been increased by another degree, and to achieve this, the pivot bearings were modified and the lower wishbones were equipped with stiffer bearings, subframes, and stabilizers. The rear axle features a four-link design with separate spring/damper arrangement, subframe, and tubular stabilizer bar. The wheel carriers are stiffer than those of the A3 and S3 to absorb the increased lateral forces generated by the torque splitter. The negative camber here is almost half a degree more compared to the A3. 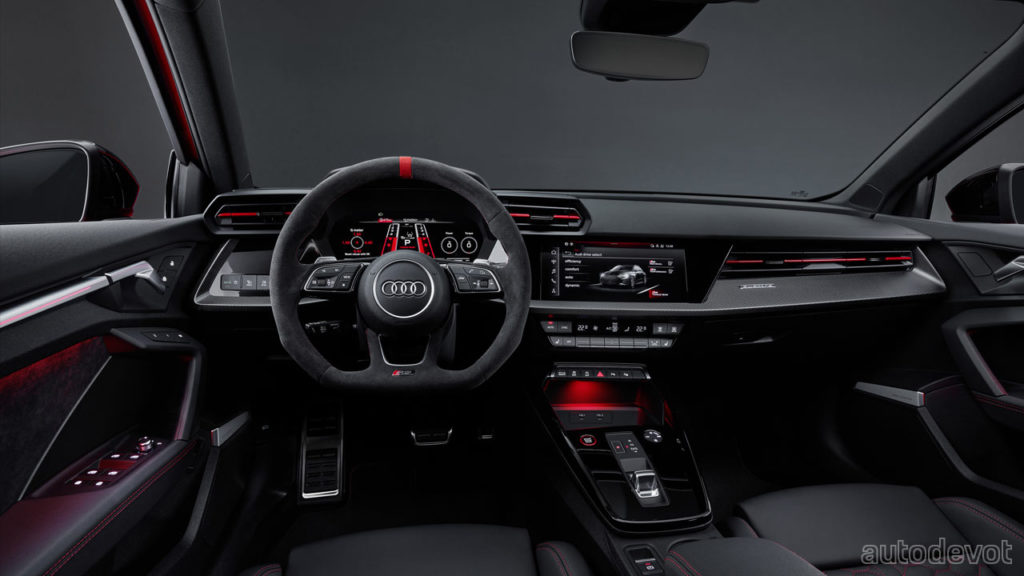 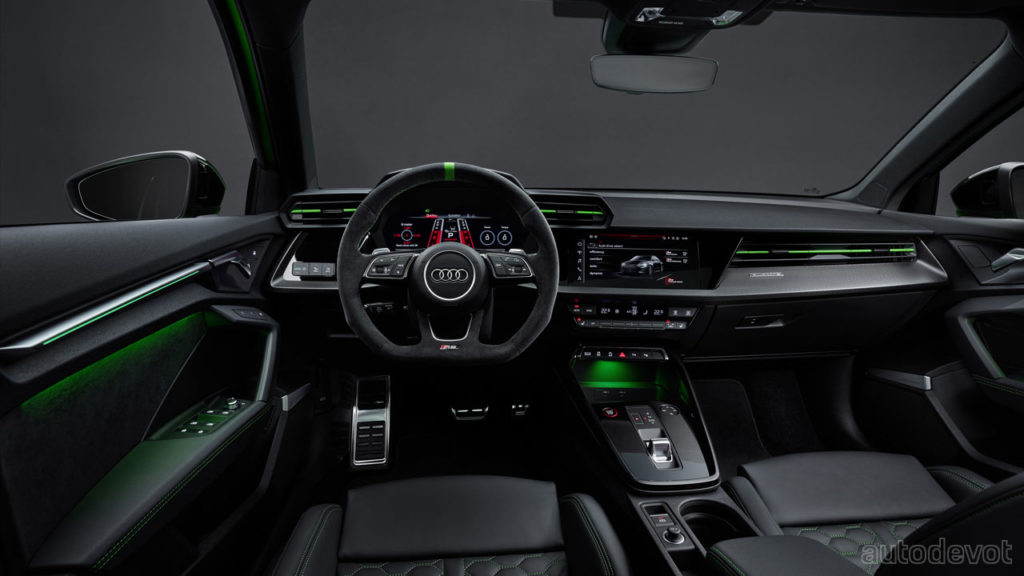 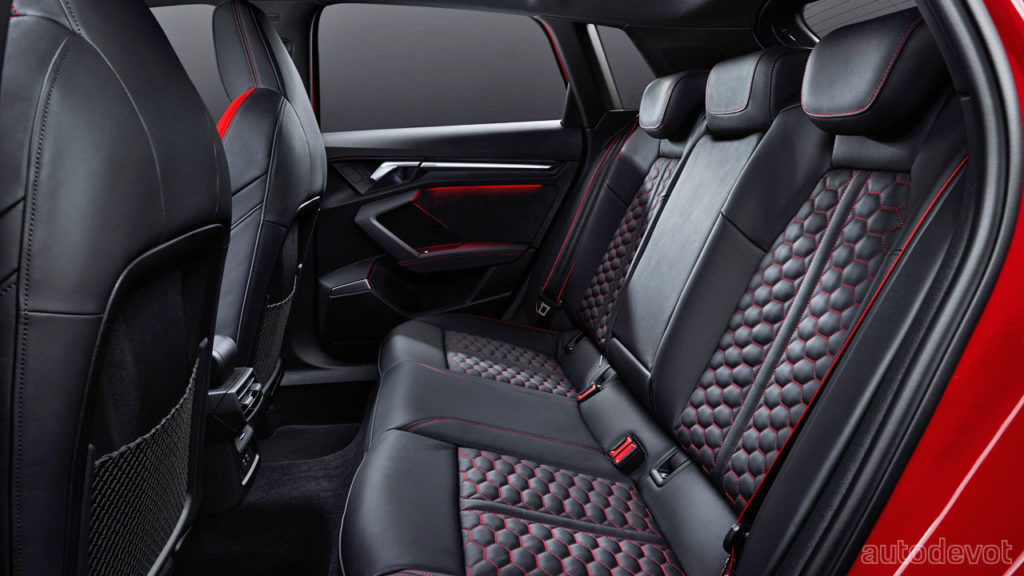 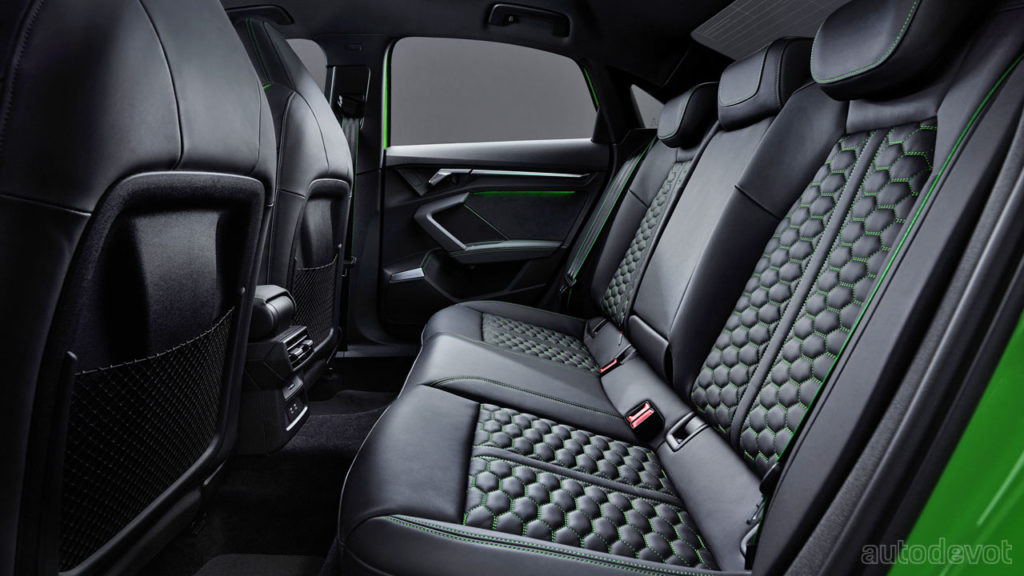 The cabin has been spiced up with matching contrast highlights depending on the exterior paint; a flat-bottom RS Sport leather steering wheel with a 12 o’clock stripe; an integrated RS Mode button on the steering wheel; carbon fibre inserts on the dashboard; RS sport seats, and of course, model-specific graphics on the displays.

Both RS models feature the RS torque splitter on the rear axle. Read more about it in detail here.