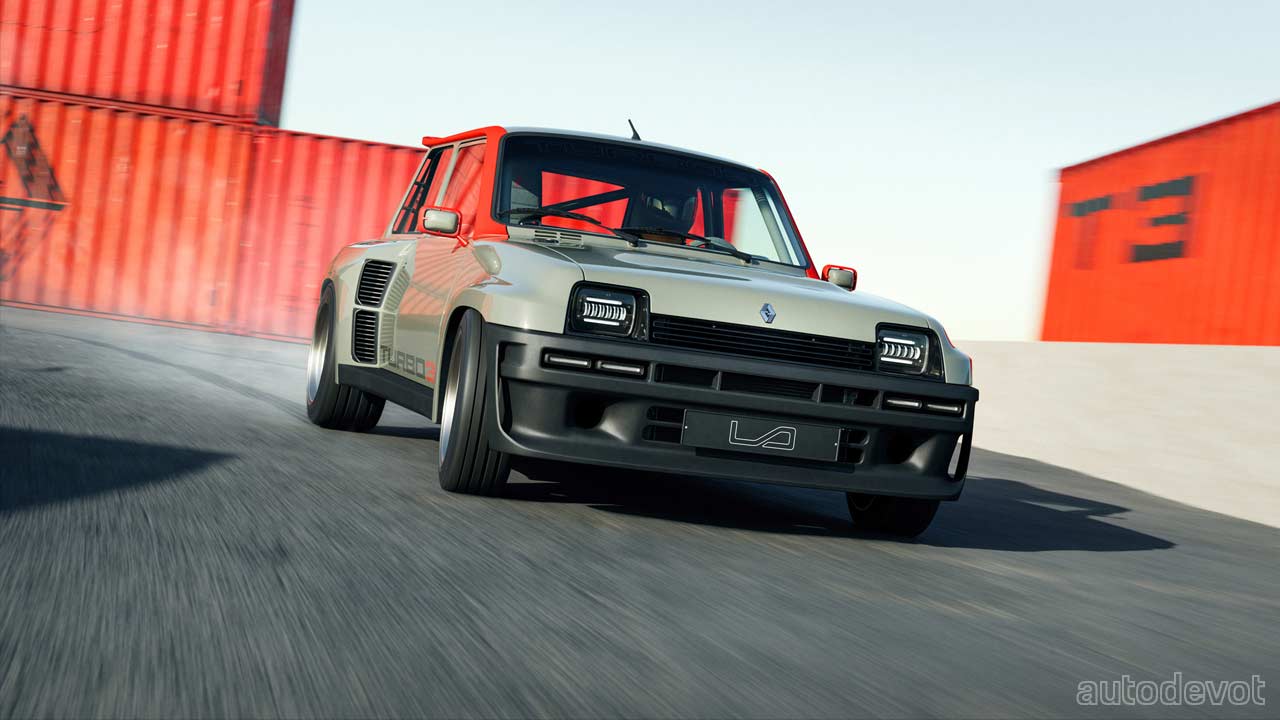 Yearning for an old-school driving experience?

In case you missed the story, Renault is bringing back the iconic Renault 5 nameplate; a concept was showcased earlier this year and we might see a production version in a year or two. But it’s gonna be an EV, for obvious reasons. Which means even if a “Turbo” hot-hatch version returns, it’s not gonna have an actual turbo — just like in the Taycan Turbo. Sure, the cars of the future will be fast, safe, efficient and far less polluting. But, they will be more like robots with little to no tactile experience. So what are the options for those who crave an old-school driving experience? Well, the obvious one is to find something in the used car market, or, how about a restomod? 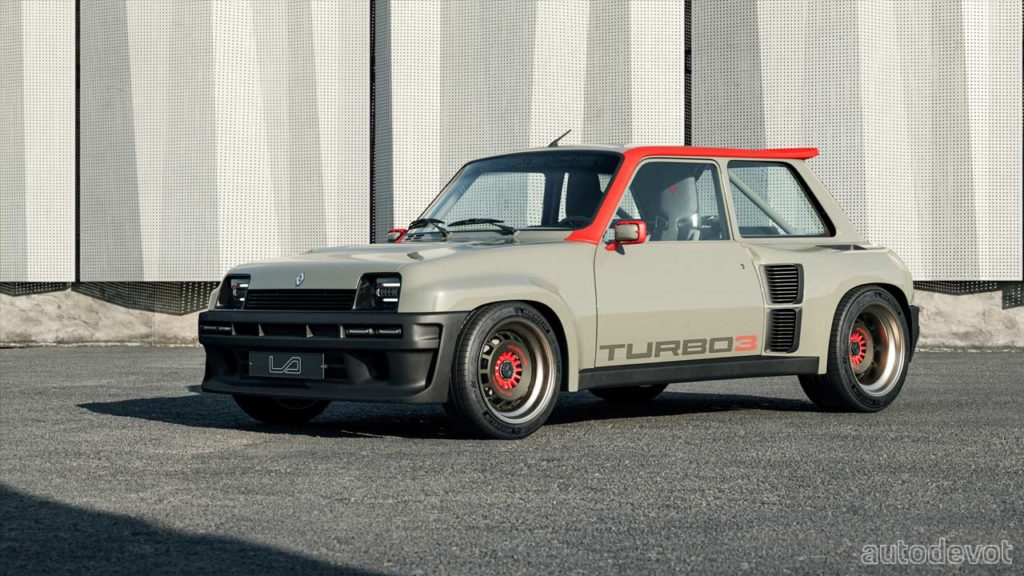 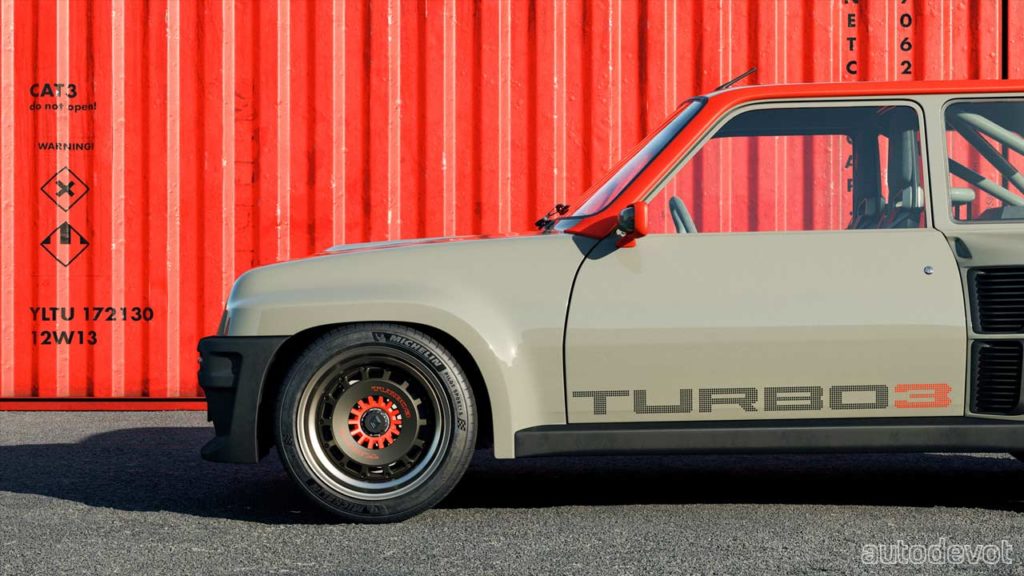 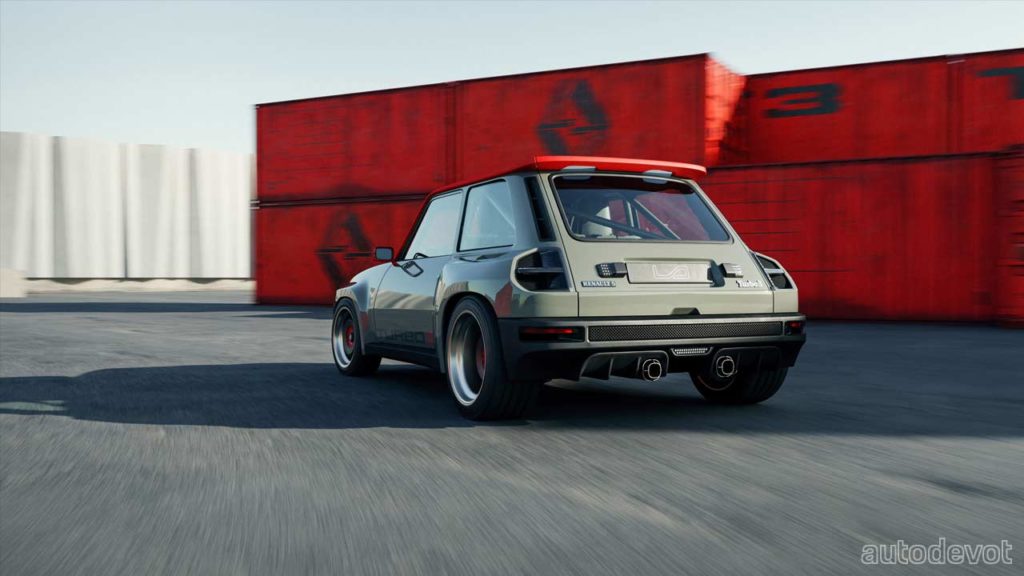 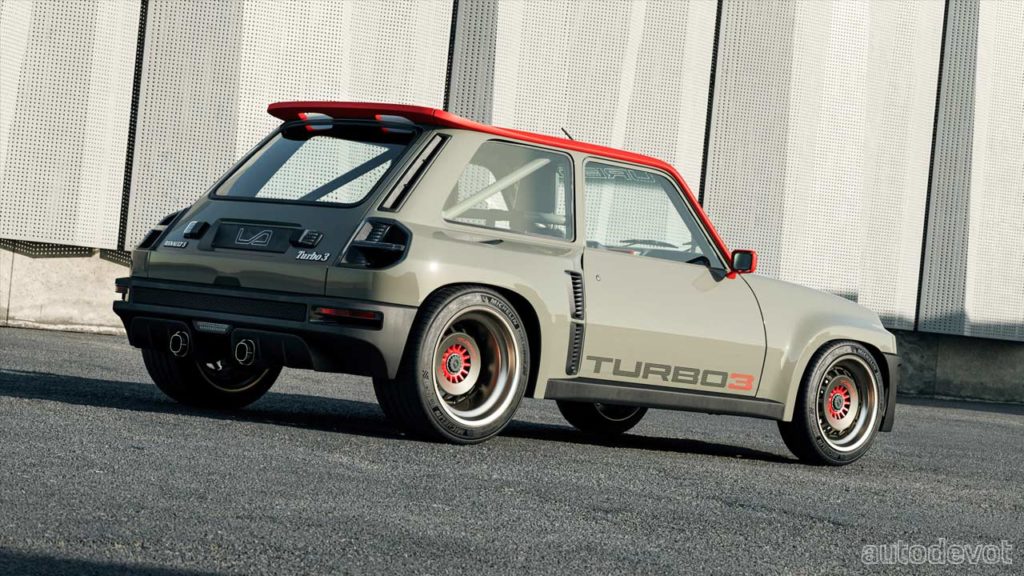 Legende Automobiles, a new player in the restomod business, has revealed the Turbo 3 as a homage to the Renault 5 Turbo hot hatch. Why “Turbo 3”? Well, remember, Renault produced a watered-down (cheaper) second version named Renault 5 Turbo 2. And so, the Turbo 3 is sort of an unofficial continuation of that. The difference is, of course, there’s no watering-down here. The bodykit is fully made of carbon fibre, including the rear quarter window frame with integrated air curtains (on the c-pillar). The front and rear lighting has been modernized with LEDs. As for the suspension, the Turbo 3 uses a double-wishbone setup at the front and rear, as a homage to the R5 Maxi Turbo rally car. Rounding off the exterior looks are custom rims measuring 16-inch at the front and 17-inch at the rear. 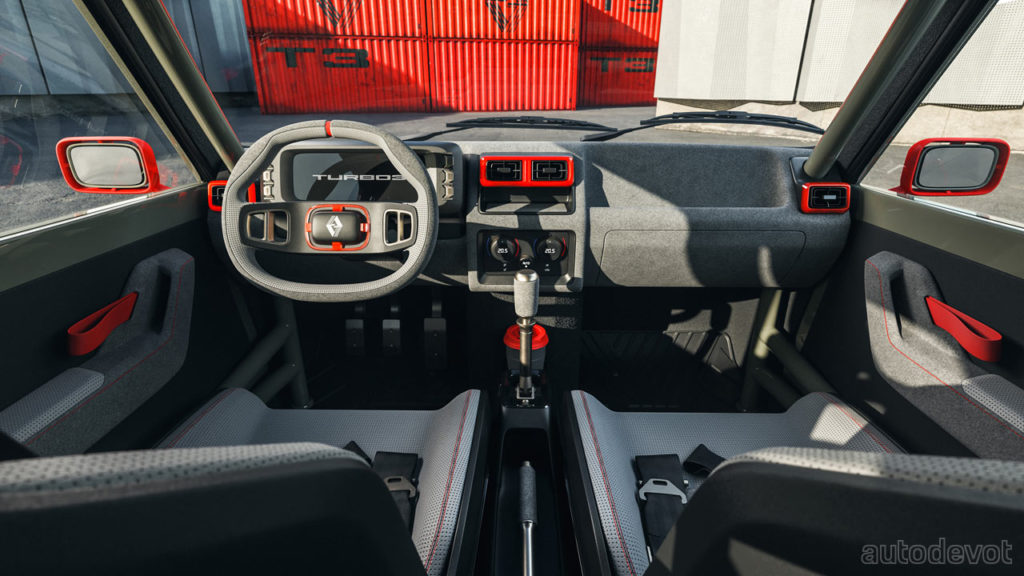 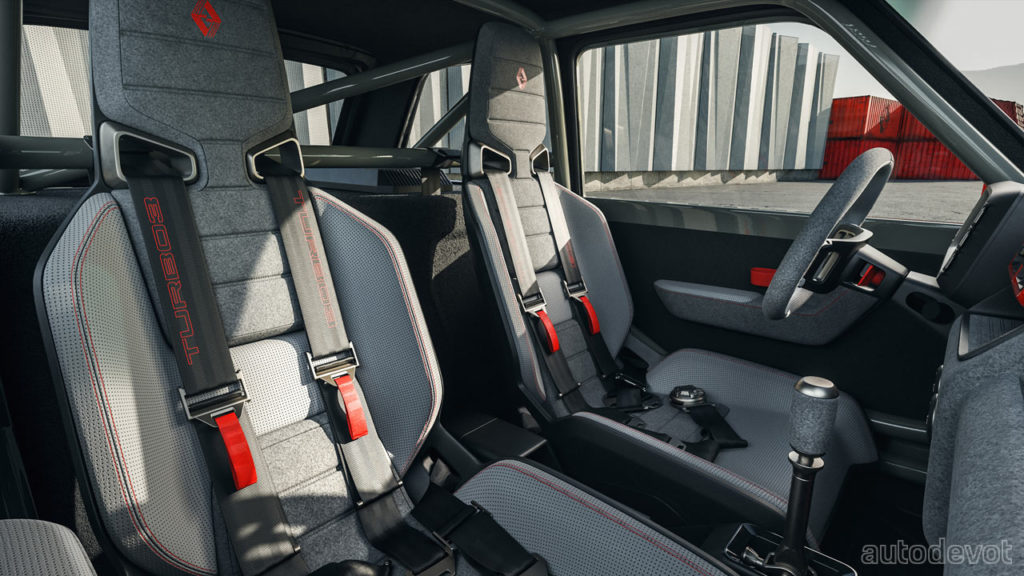 The cabin has been modernized with a concept-ish-looking steering wheel, a digital driver display, automatic climate control, and thin, light-weight sporty seats with a racing harness. There’s a generous usage of Alcantara throughout the cabin. As with the exterior, the orange accents add the necessary contrast to a gray-themed cabin. Also, notice the roll cage behind the seats. 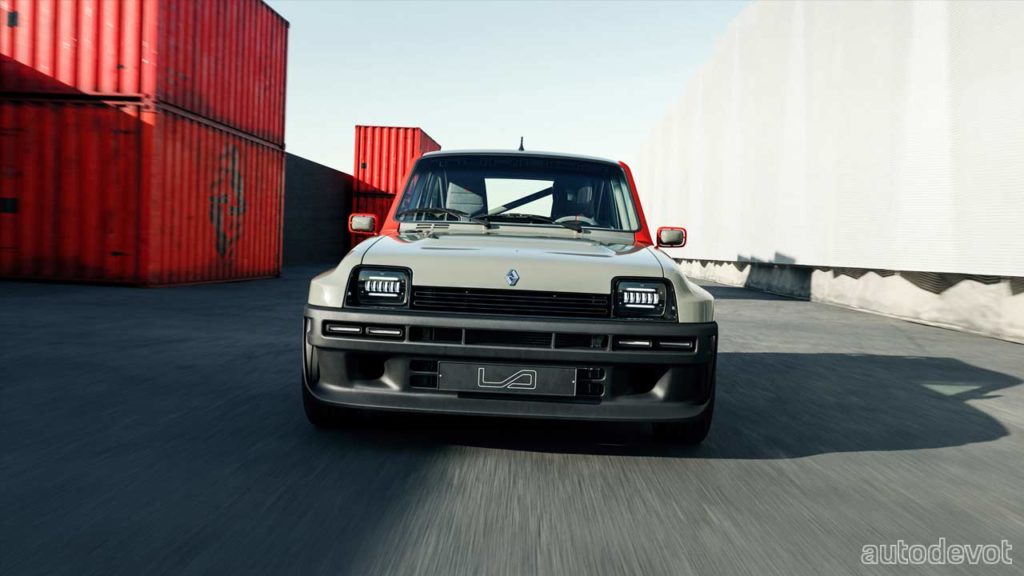 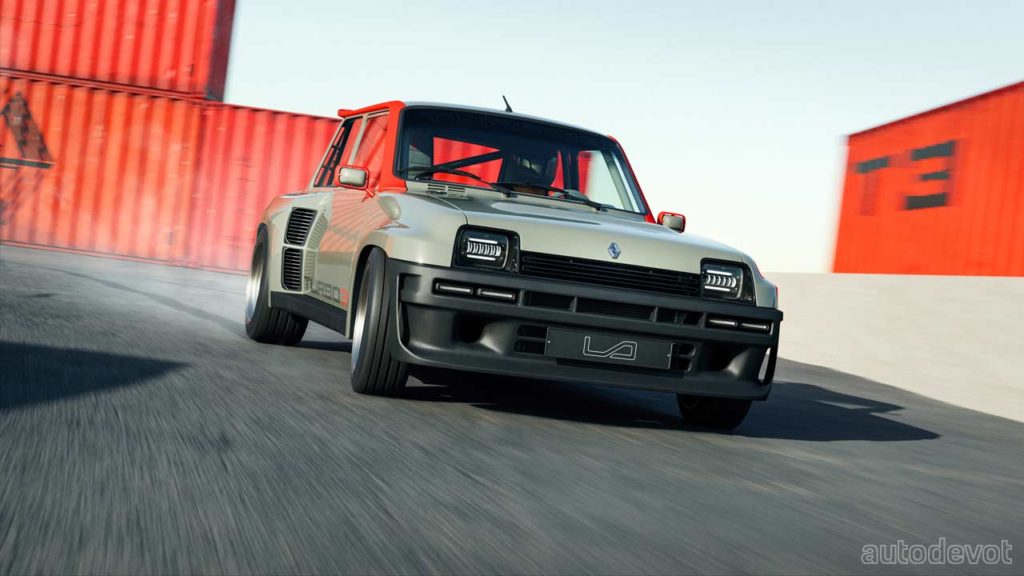 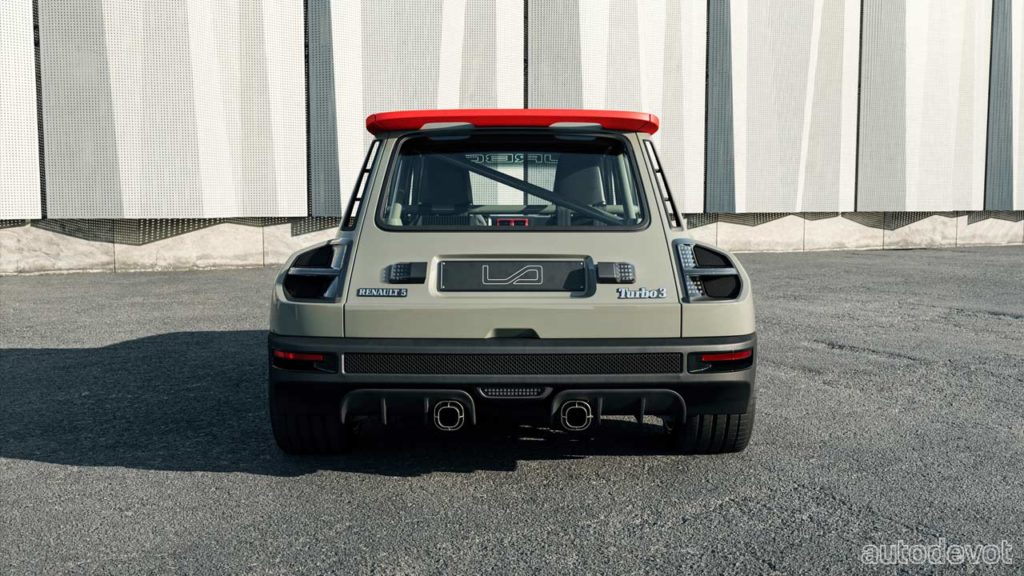 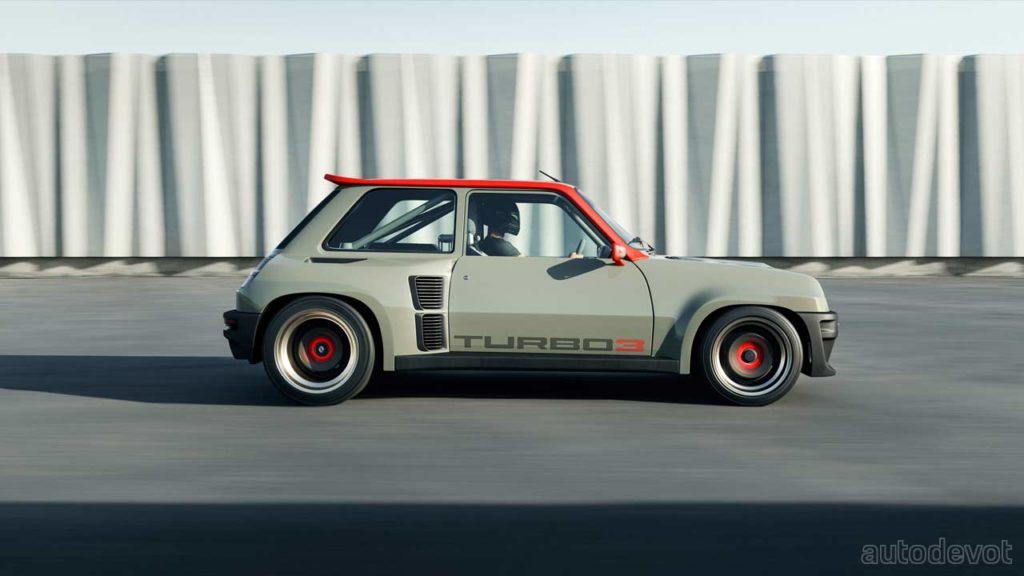 I’m told that the turbocharged 1.4L 4-cylinder engine produces 298 kW (405 metric hp or 400 bhp), which is significantly more compared to the stock 118 kW (160 metric hp) and 20 metric hp more than the rally version’s output. The donor car’s 5-speed manual gearbox can be swapped for a sequential gearbox, depending on the availability.