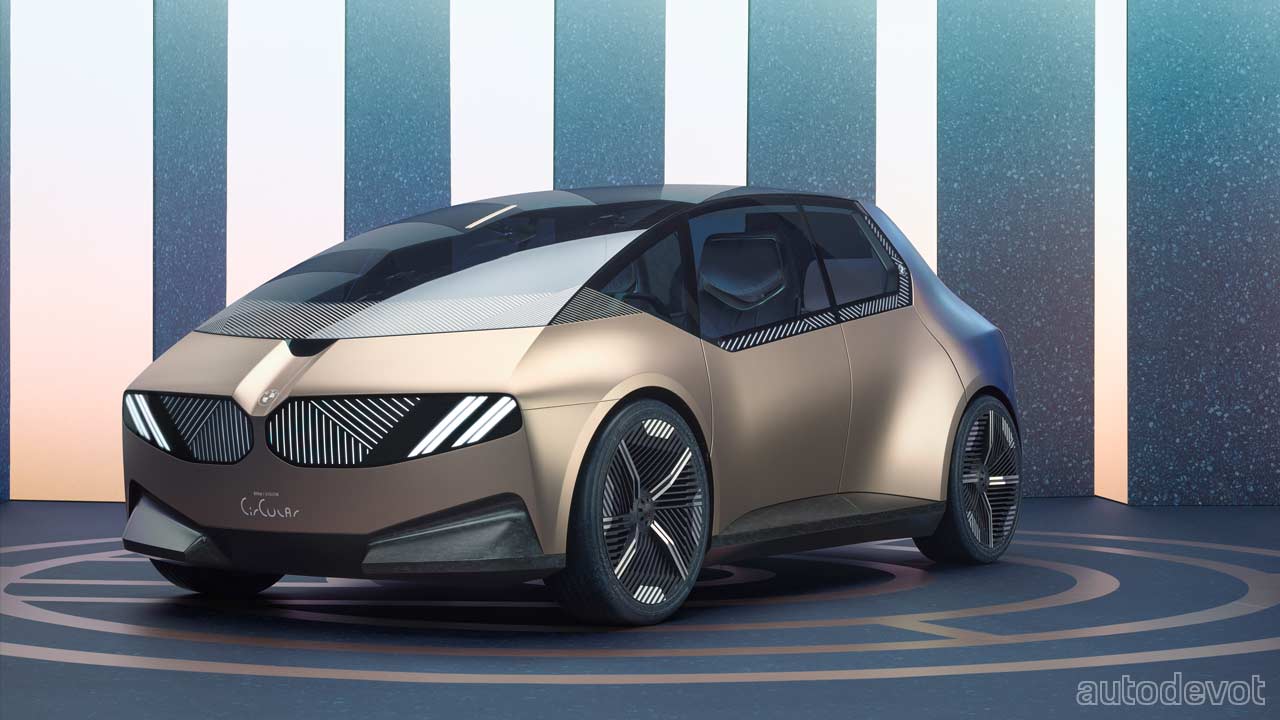 The BMW i Vision Circular concept is not really a car. I mean, it’s not about the car itself, but it’s really about a proof of concept of a bunch of ideas for the future. What that means is, you might not necessarily see a production version of the i Vision Circular in the future, but some of the proposed ideas might make it to a production vehicle in the future. The i Vision Circular is set in the year 2040 with a focus on minimalism, sustainability and recycling. I know, everyone seems to be going in that direction these days, but this one tries to push it to the max and then some. 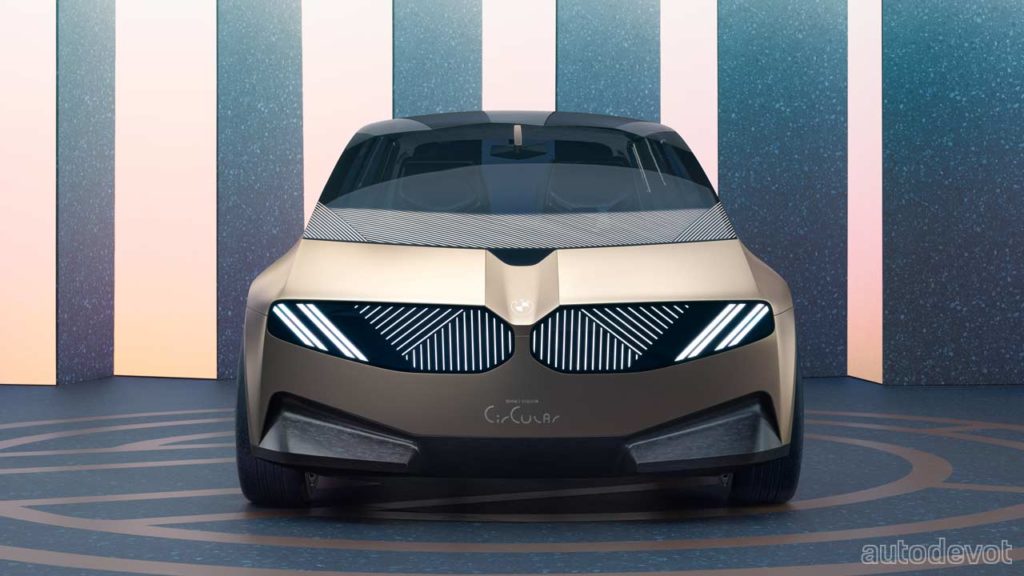 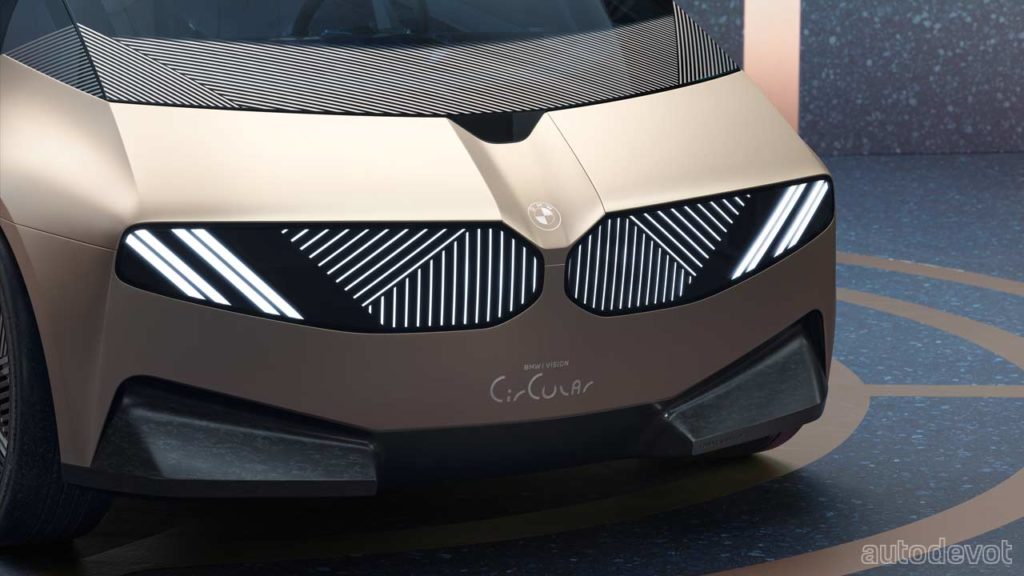 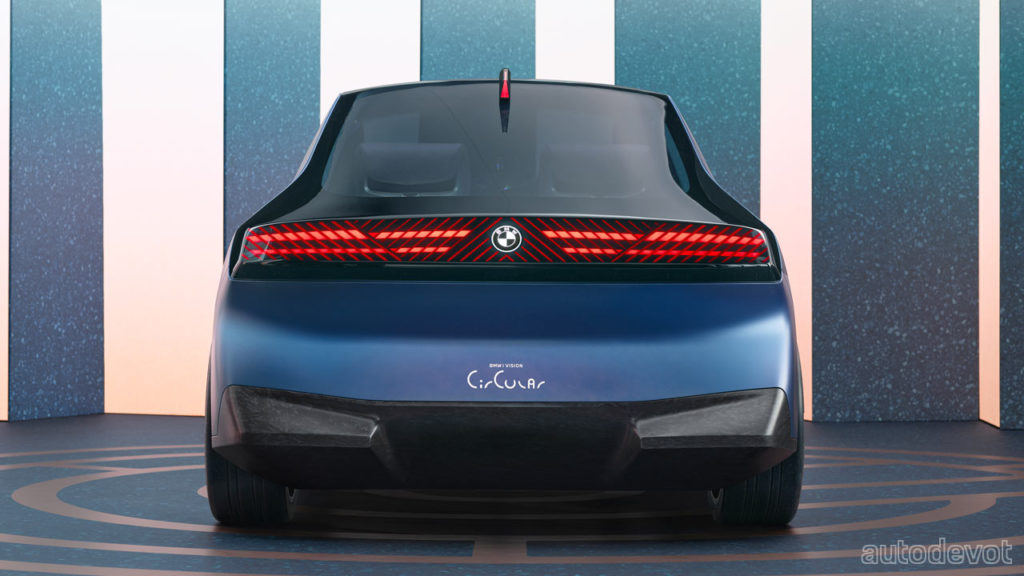 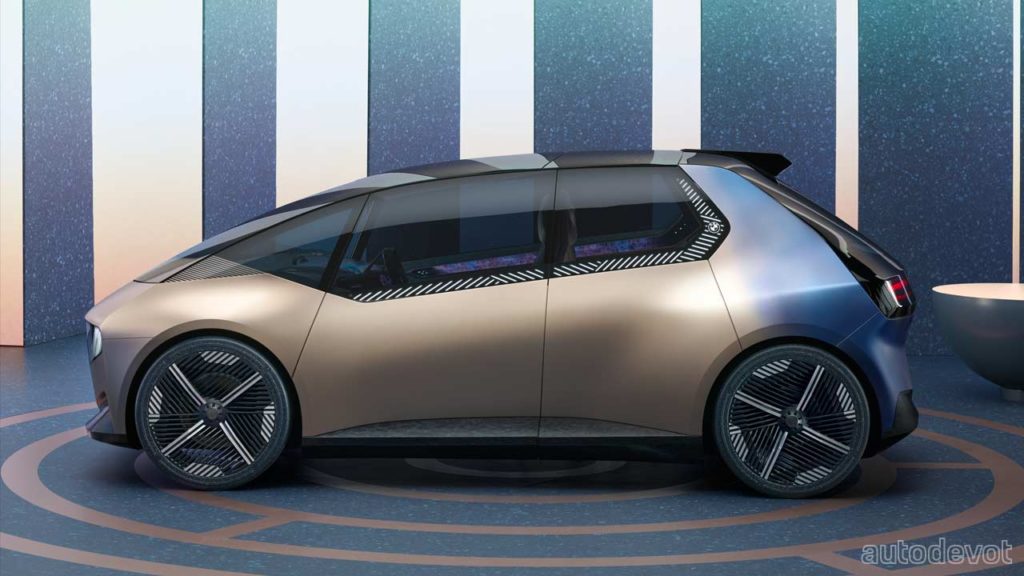 The i Vision Circular concept revolves around four principles: RE:THINK, RE:DUCE, RE:USE and RE:CYCLE, which I think are fairly self-explanatory. In simple terms, it’s about doing more with less. The Kidney Grille, for instance, is not really a grille, but are displays. The idea is to achieve (or at least simulate) complicated geometric shapes by reducing the number of materials used. You might say we might as well use four giant displays and make a box and 3D render a nice design instead. Well, that doesn’t sound like a bad idea at all. But anyway, the same principle applies to the window line on the side, the chrome is replaced with a line of displays where you hover your hand over to open the door. 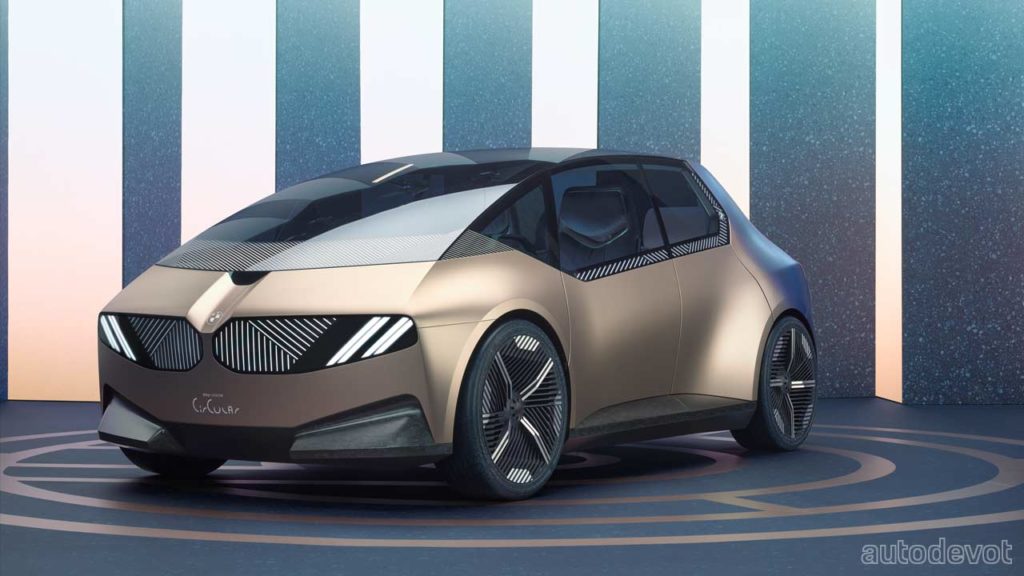 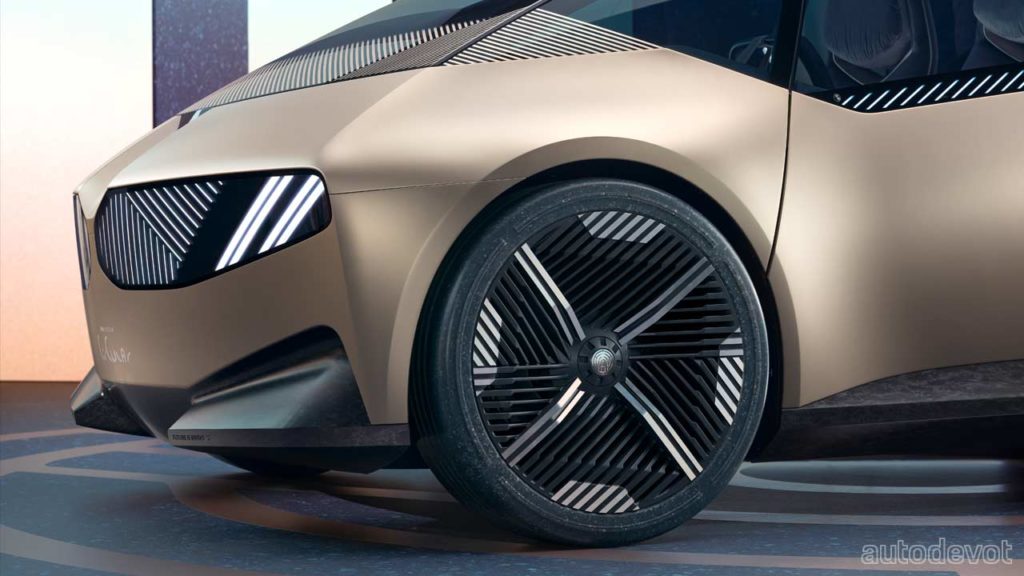 Most of the bodywork is made from secondary aluminium (recycled/scrap), and is not painted, but features a light-gold anodized finish. The rear-end is made from heat-treated steel that creates a bluish-purple hue. The idea of the i Vision Circular is also to be able to quickly dismantle parts in order to replace them, by reducing the number of fasteners, or in other words, designing the parts in such a way that it is easy to remove and replace. The wheels, for instance, have a quick-release fastener. 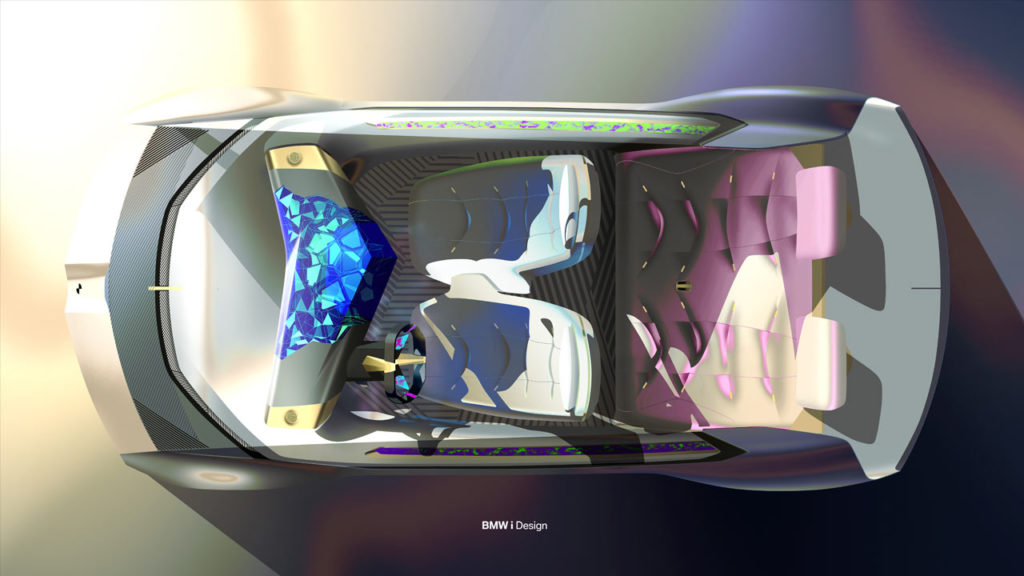 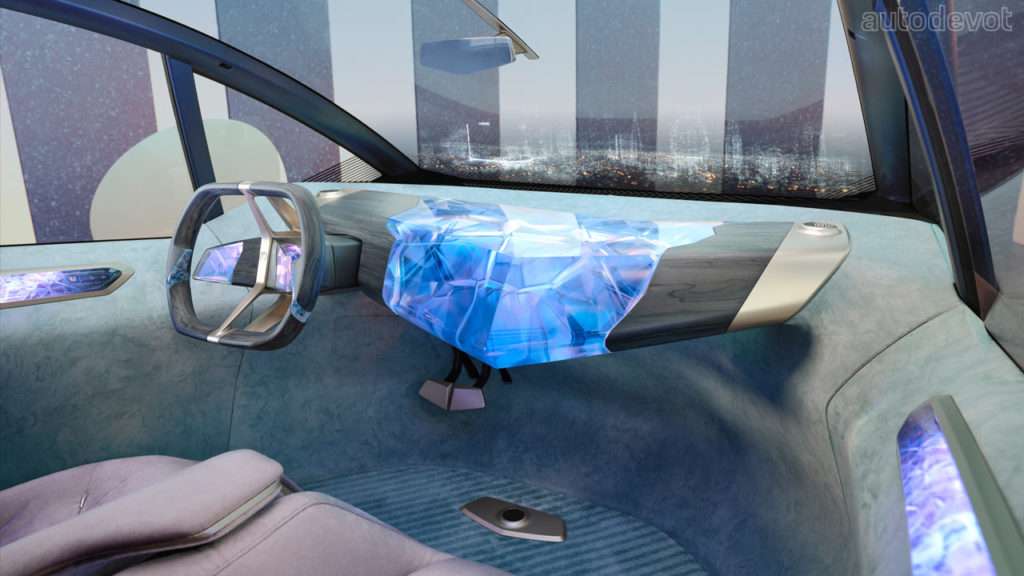 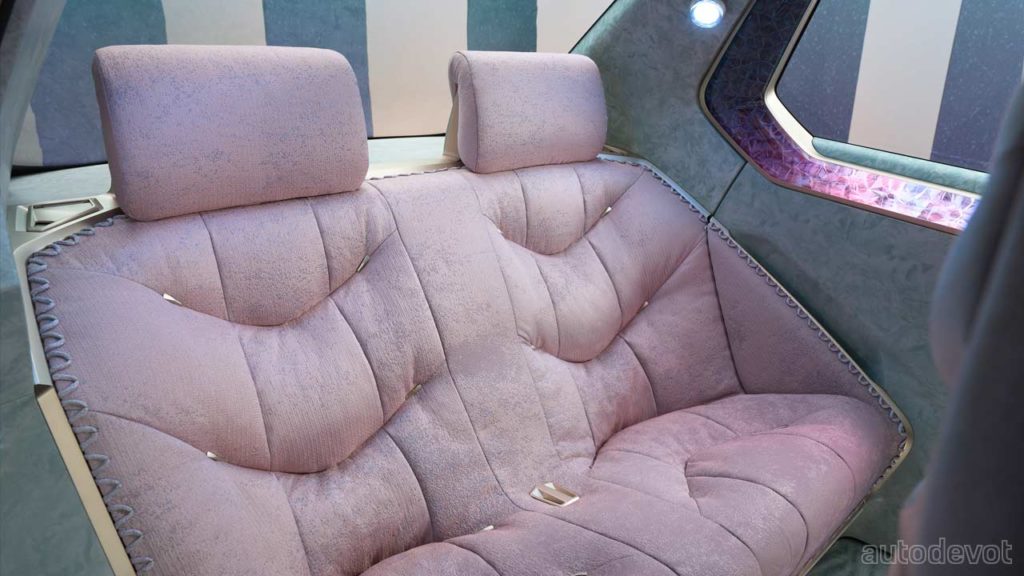 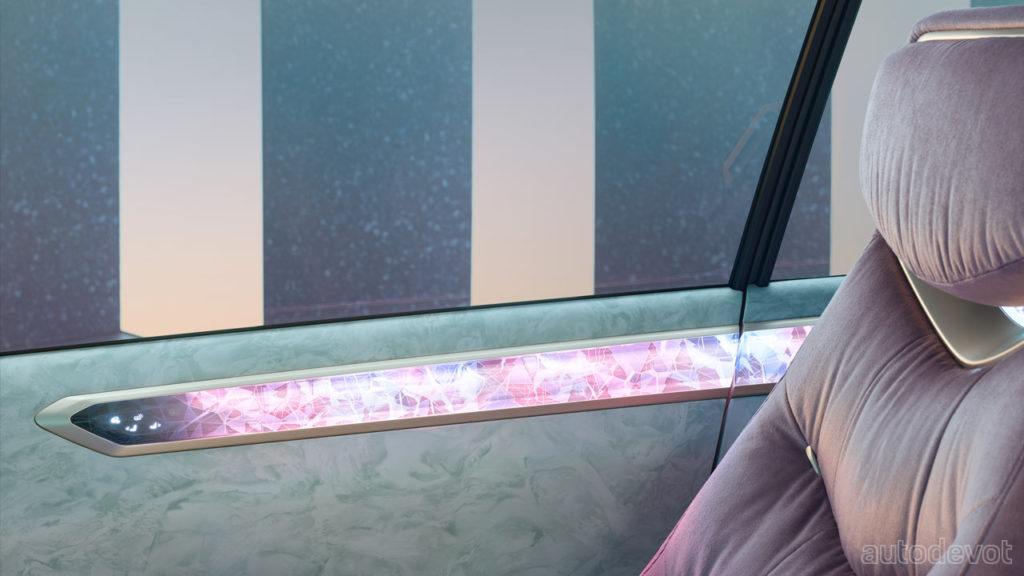 The rear doors are rear-hinged. And once inside, the same principles of reduction, minimalism, recycling and easy replacement we discussed so far, apply. The velvet-like upholstery on the seats is made from recycled plastic and is held within a light-gold aluminium frame. The back of the front seat shells are also made of recycled plastics, but with a terrazzo-look finish. 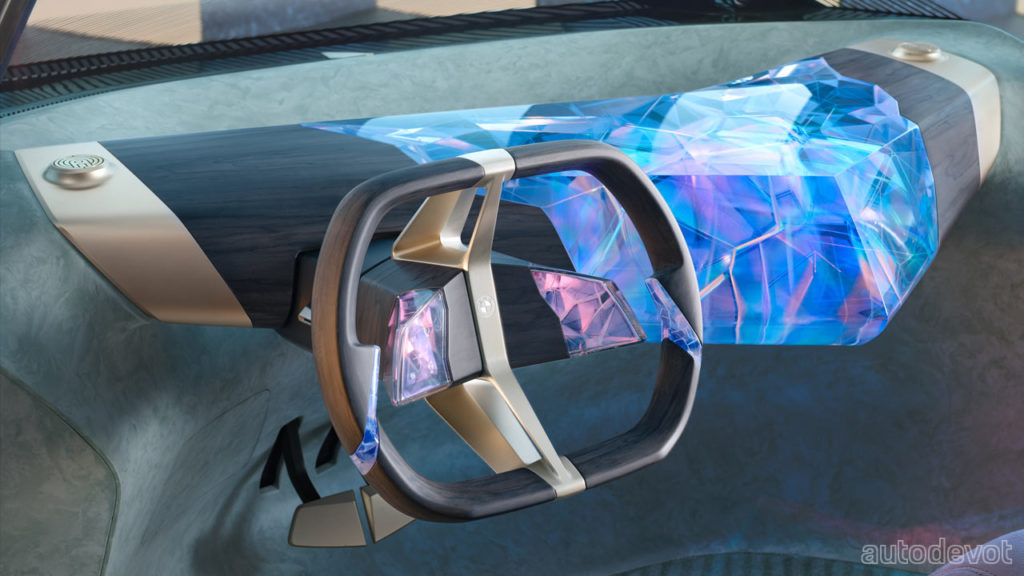 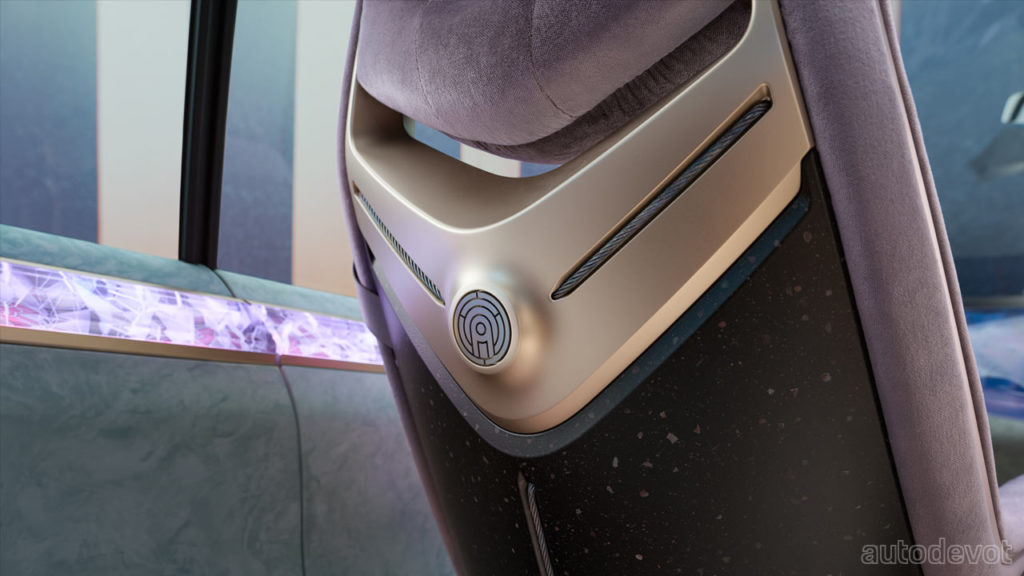 But what’s more interesting is that although the car is set in 2040, it still retains the steering wheel and pedals, which is, of course, a good thing. Speaking of the steering wheel, it is 3D-printed from some kind of a wood powder; it also incorporates an interesting crystal touch interface. A similar crystal structure can be found on the dashboard where you’d normally find a touchscreen. I’m not entirely sure how that works, but if I understood anything from BMW’s information snippet videos, important information is projected onto the lower part of the windscreen.

Of course, the i Vision Circular is all-electric, juiced by all-solid-state batteries, which are of course, recyclable and manufactured with materials sourced from the recycling loop.