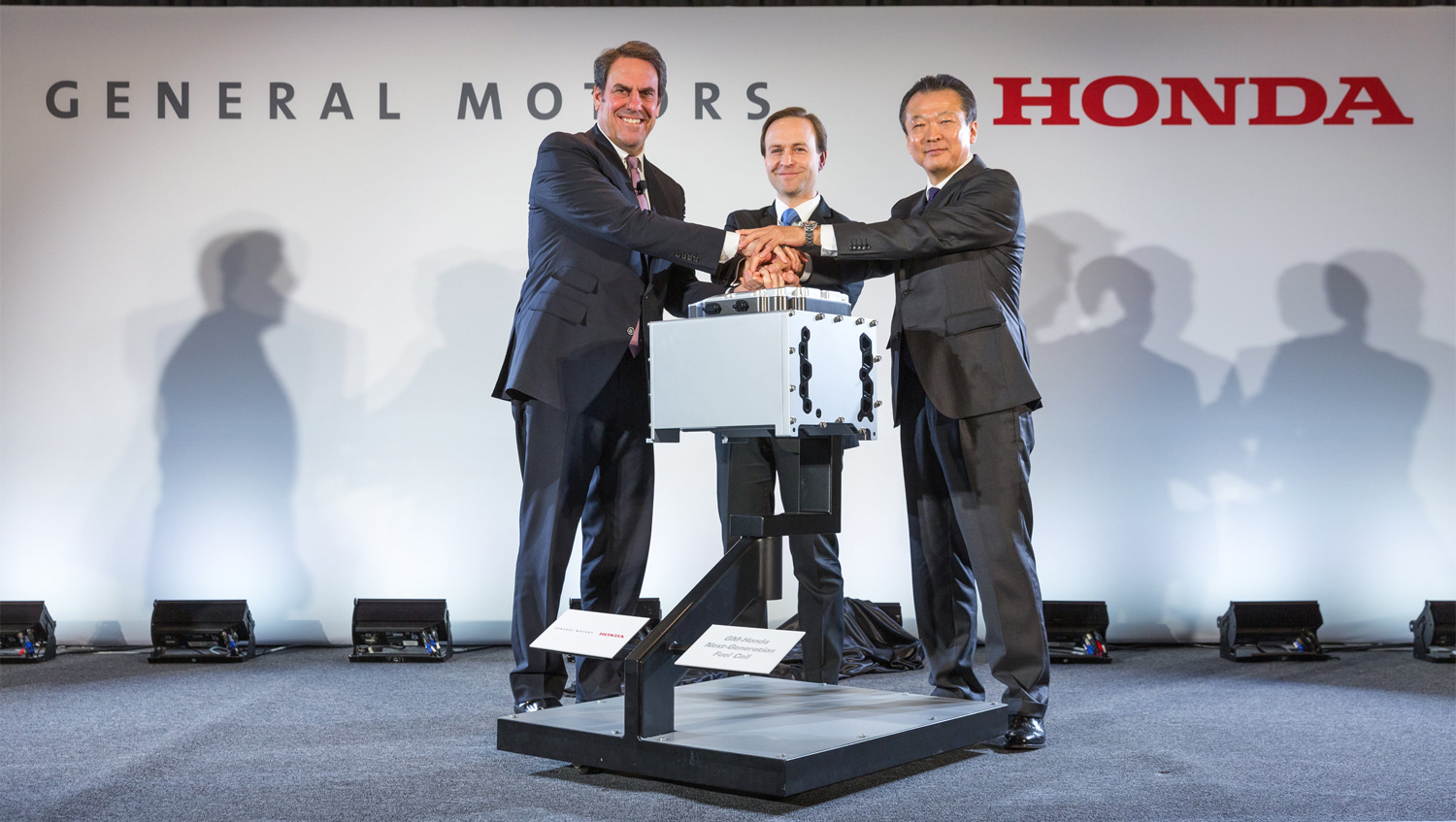 General Motors and Honda today announced the establishment of a joint venture to mass produce an advanced hydrogen fuel cell system that will be used in future products from each company. The duo has established Fuel Cell System Manufacturing, LLC (FCSM) at an equal investment totaling $85 million, and will operate within GM’s existing battery pack manufacturing facility site in Brownstown, Michigan, south of Detroit. Mass production of fuel cell systems is expected to begin around 2020 and is expected to create nearly 100 new jobs.

“Over the past three years, engineers from Honda and GM have been working as one team with each company providing know-how from its unique expertise to create a compact and low-cost next-gen fuel cell system,” said Toshiaki Mikoshiba, Chief Operating Officer of the North American Region for Honda Motor Co., Ltd. and president of Honda North America, Inc. “This foundation of outstanding teamwork will now take us to the stage of joint mass production of a fuel cell system that will help each company create new value for our customers in fuel cell vehicles of the future,” he added.

The Fuel Cell System Manufacturing (FCSM) joint venture will be operated by a board of directors consisting of three executives from each company that will include a rotating chairperson. In addition, a president will be appointed to rotate between each company.

GM and Honda are acknowledged leaders in fuel cell technology with more than 2,220 patents between them, according to the Clean Energy Patent Growth Index. GM and Honda rank No. 1 and No. 3, respectively, in total fuel cell patents filed in 2002 through 2015.

In addition, GM and Honda are working together to reduce the cost of development and manufacturing through economies of scale and common sourcing. The two companies also continue to work with governments and other stakeholders to further advance the refueling infrastructure that is critical for the long-term viability and consumer acceptance of fuel cell vehicles.

GM is currently demonstrating the capability of fuel cells across a range of land, sea and air applications.

“With the next-generation fuel cell system, GM and Honda are making a dramatic step toward lower cost, higher-volume fuel cell systems. Precious metals have been reduced dramatically and a fully cross-functional team is developing advanced manufacturing processes simultaneously with advances in the design,” said Charlie Freese, GM executive director of Global Fuel Cell Business. “The result is a lower-cost system that is a fraction of the size and mass.” Honda also spoke about 2017 Clarity Fuel Cell Vehicle. Deliveries of the vehicle to U.S. customers in December 2016 following a spring 2016 launch in Japan. The Clarity Fuel Cell received the best driving range rating from the EPA of any electric vehicle without a combustion engine with a range rating of 366 miles and fuel economy rating of 68 miles per gallon of gasoline-equivalent combined.

“The expertise Honda has established that led to creation of the first-generation Clarity fuel cell system is valuable experience that we are leveraging in the joint development of the next-generation fuel cell system with GM,” said Takashi Sekiguchi, managing officer and director and chief operating officer of Automotive Operations, Honda Motor Co., Ltd. “Our collaboration is an opportunity to further utilize the strengths of each company to popularize fuel cell vehicles at the earliest possible time.”

GM and Honda collaborated in a powertrain cross-supply arrangement in 1999 under which Honda manufactured 50,000 V6 engines for the Saturn VUE and Honda received diesel engines from GM’s Isuzu affiliate for use in Europe.