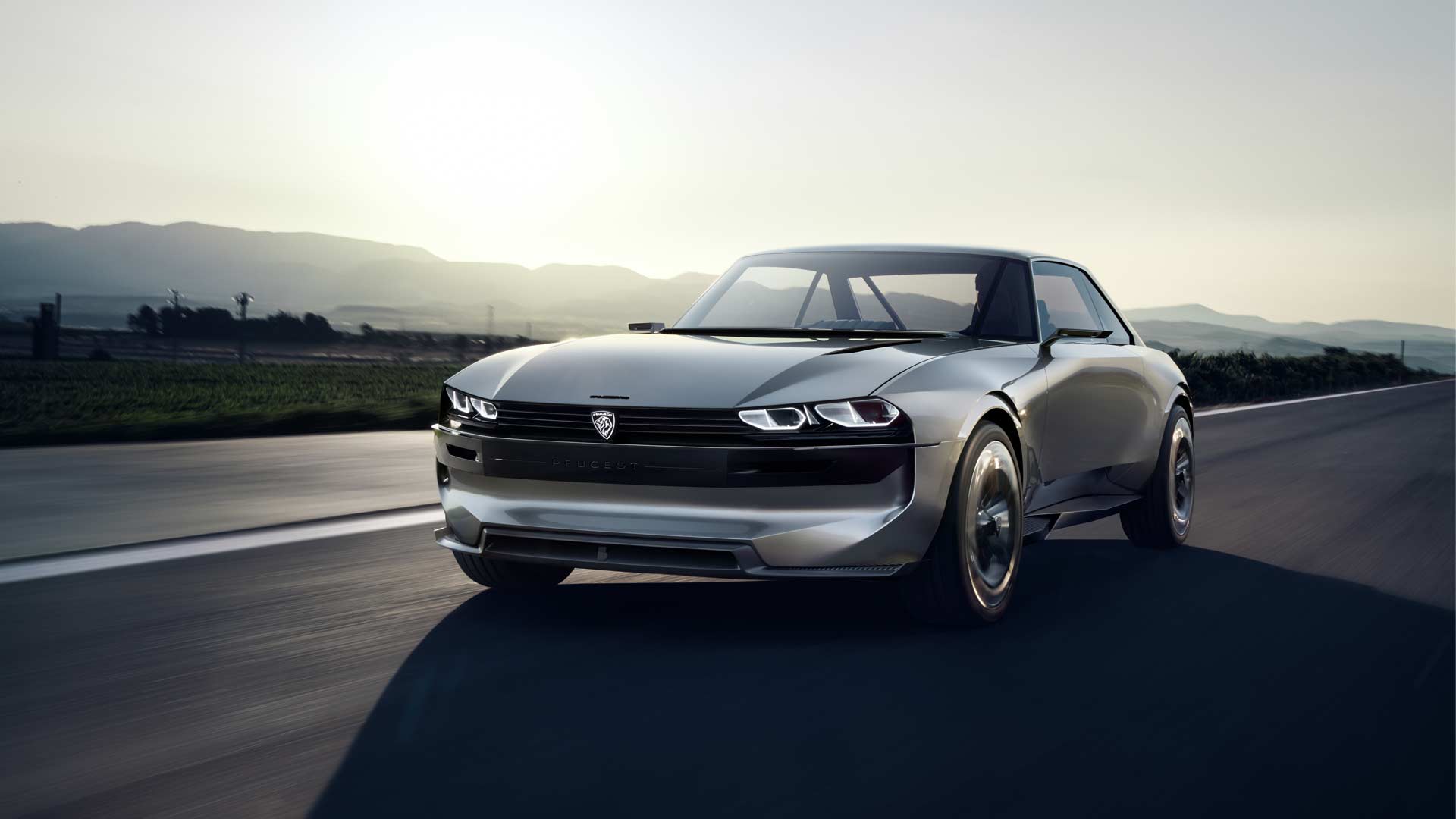 The energy transition that is currently happening will not erase the 120 years of automobile history, but what it might erase however, is the sound, the driving pleasure, a connection (manual transmission) and all the drama that goes along with it.

Peugeot says the future is not all boring when there’s the e-Legend. Speaking of which, the concept is all-electric and autonomous, but can be driven too if desired. According to the company, this is an exciting vision of the future of driving pleasure.

As we can see in the pictures here, the e-Legend concept is a modern iteration of the 504 Coupe of the ’70s. It appears that the designers have been influenced by the modern day muscle cars too.

“Boredom will never be part of our DNA,” says Jean-Philippe Imparato, CEO of Peugeot. Naturally, the cameras on either side replace the conventional ORVMs. The wheel arches are carved in negative and the one at the front includes an air passage. There’s also a screen under the rear quarter windscreen that displays a personalized greeting and the charge level to its user before departure. It also warns the people outside that the car is driving in autonomous mode. The touch-opening door control is concealed in the side window.

The body is finished in a shade of grey subtly tinted with champagne. Depending on the outside light, the colour changes from chrome to a polished bronze metal look. Apparently, the process used is similar to that applied to the bottles of the largest perfumers.

The interiors have generous amount of wood and velvet for a relaxed environment. There are various displays – 49 inches curved display at the front of the occupants, 29 inches in the doors and 12 inches in each sun visor. There’s also a fragrance diffuser made by Ex Nihilo.

The centre console provides access to the main driving controls through a rotary control and a 6-inch touch screen. To the left of the steering wheel, a digital toggle bar is composed of contextual and configurable commands depending on the driving mode.

Speaking of driving modes, there are two autonomous modes. The “Soft” mode favours the comfort of the occupants by reducing the information displayed on the screens. The “Sharp” mode gives the occupants a maximum connection to their digital world (social networks, schedules and more). As we can see in the pictures, in autonomous mode, the steering wheel retracts under the sound bar in order to make way for the large 49-inch screen. The front seats recline as well and the armrests deploy automatically.

There are two more modes for manual driving – Legend and Boost. The latter boosts the driving pleasure and gives 180° immersion of the road on the large screen.

“The Responsive i-Cockpit is enhanced to offer its guests immersive driving specifically customized for each of the four driving modes available,” said Aude Brille, head of Peugeot strategy.

The 100 kWh battery pack is good for a range of up to 600 km according to the WLTP protocol, of which, 500 km are accessible in 25 minutes thanks to a fast recharge. The car is capable of inductive charging as well. 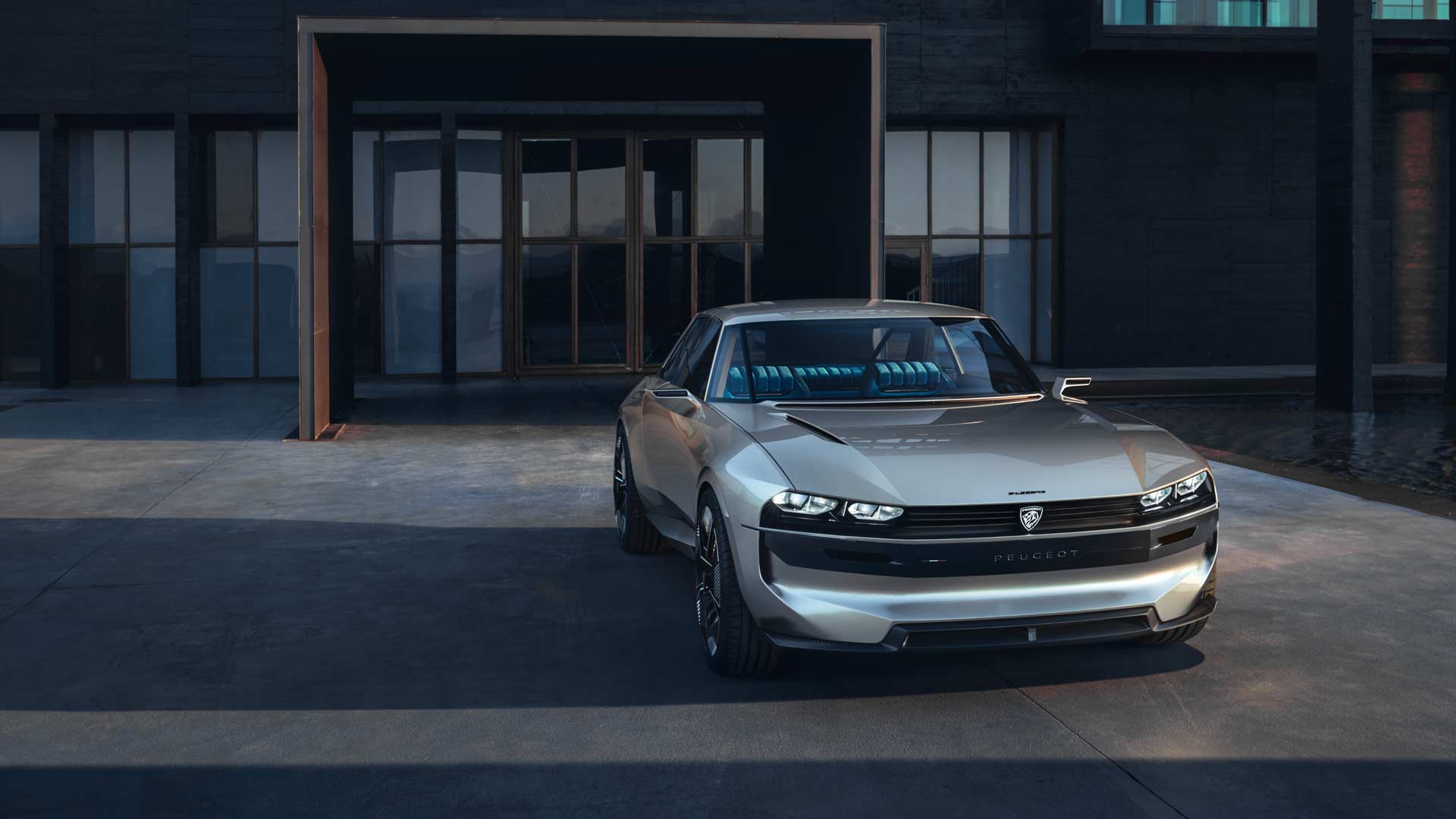 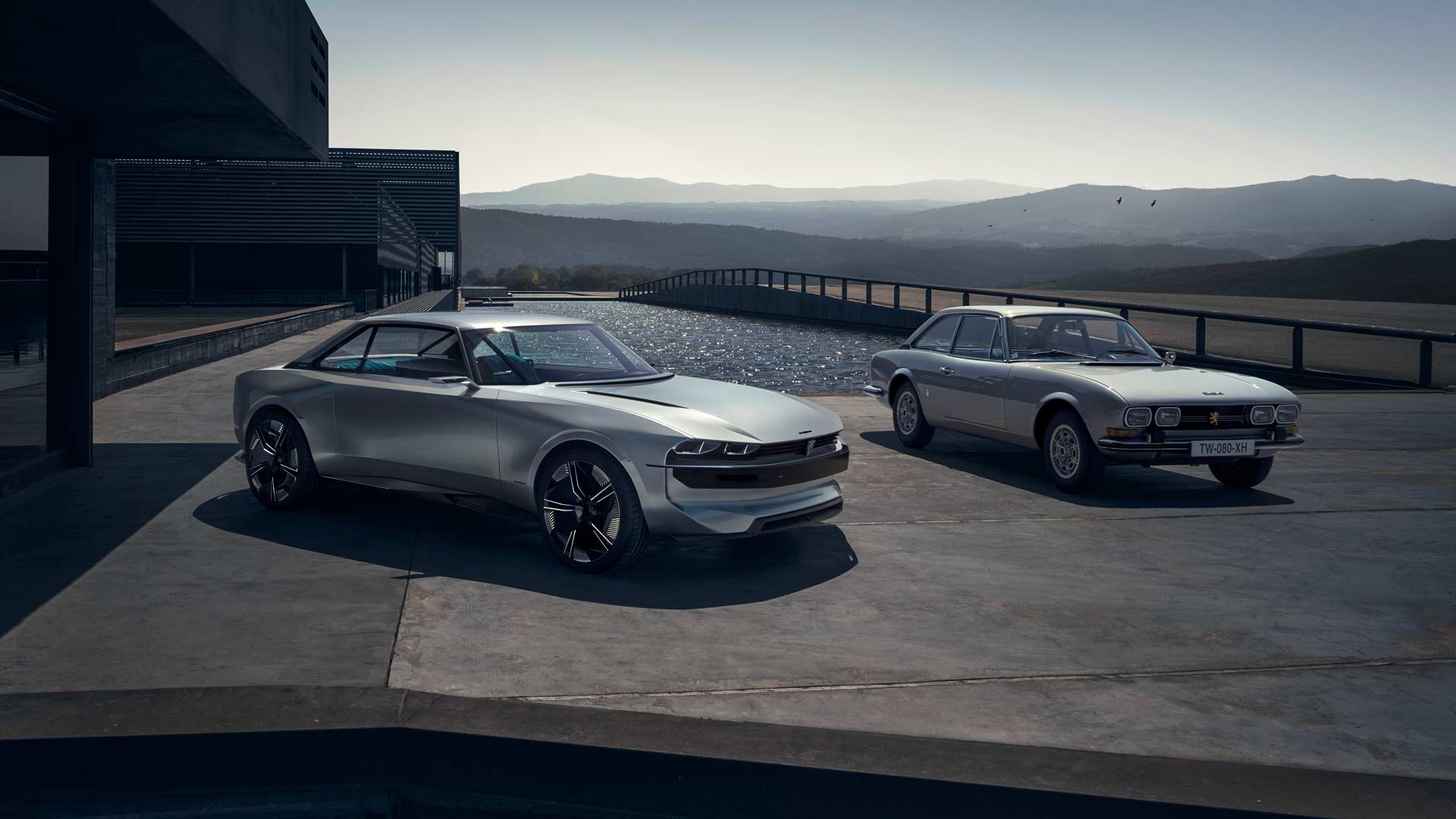 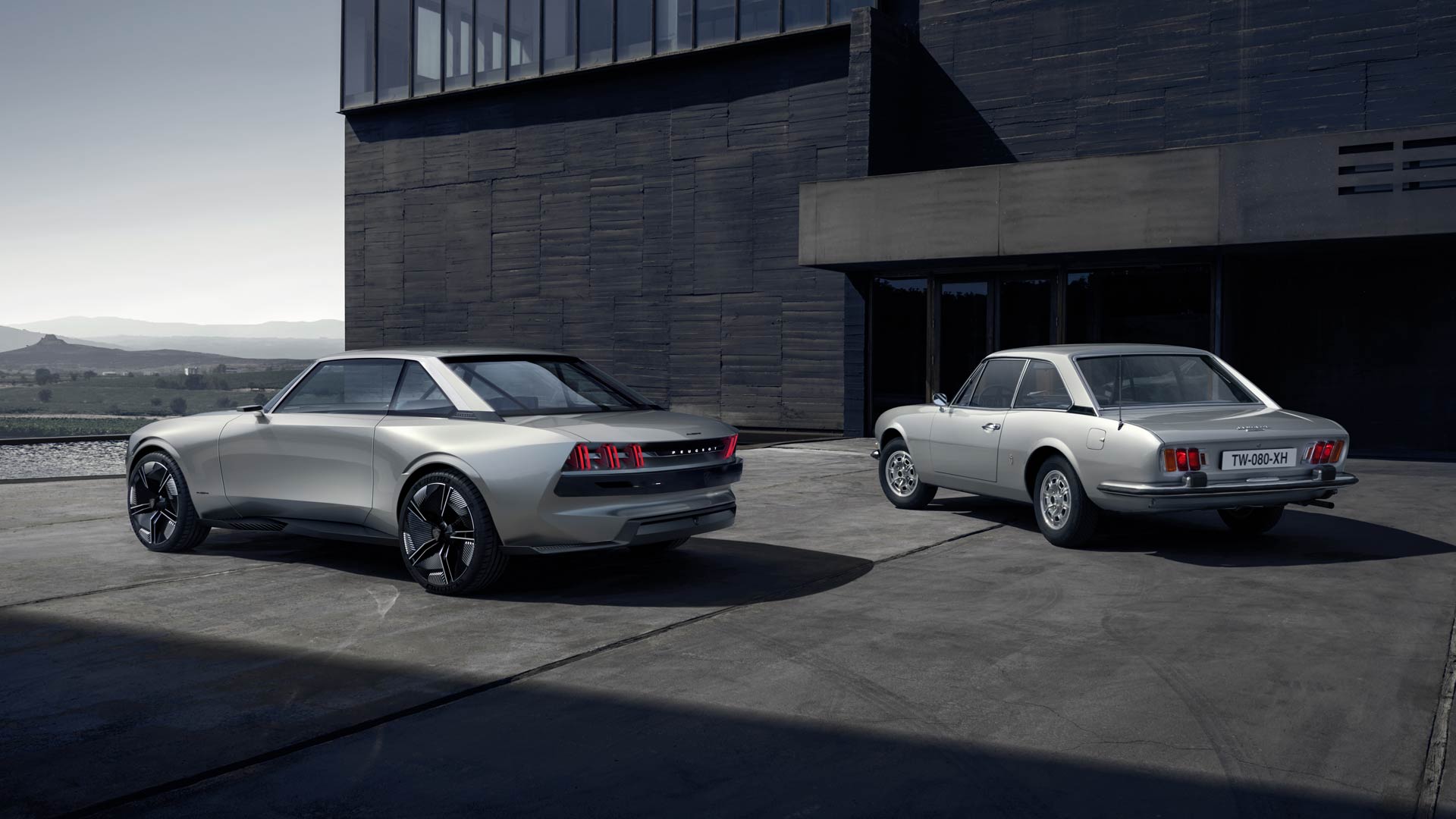 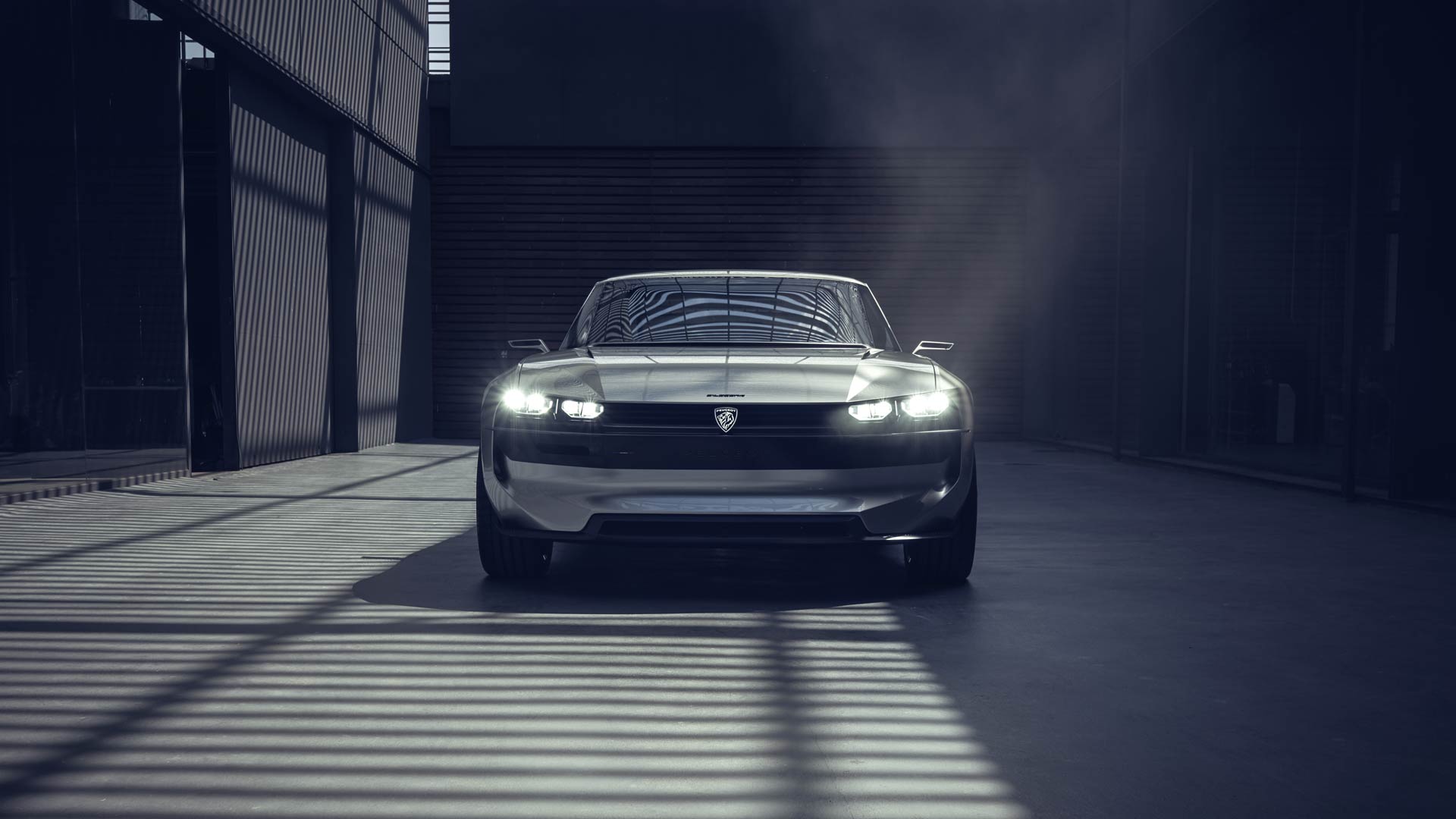 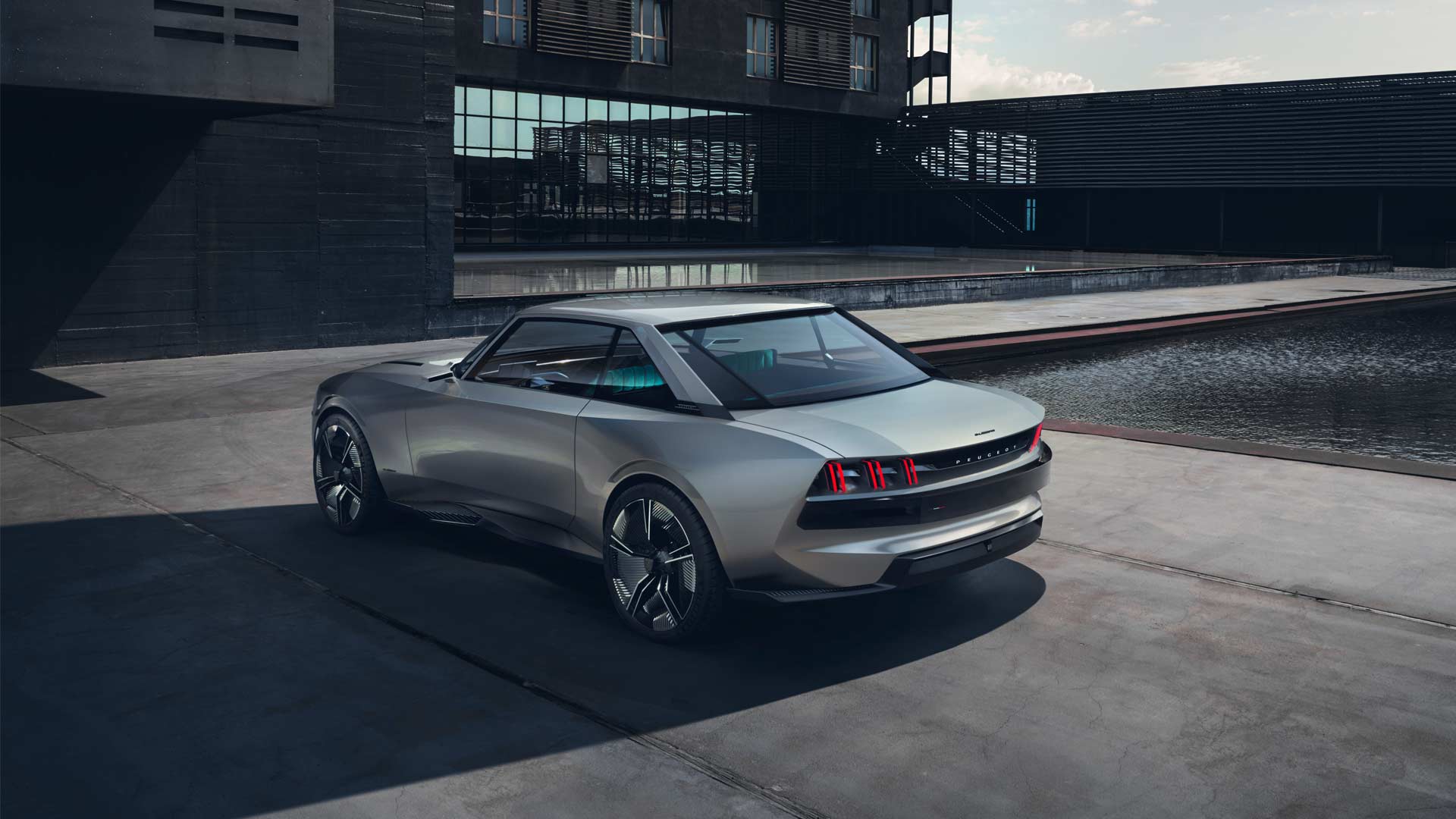 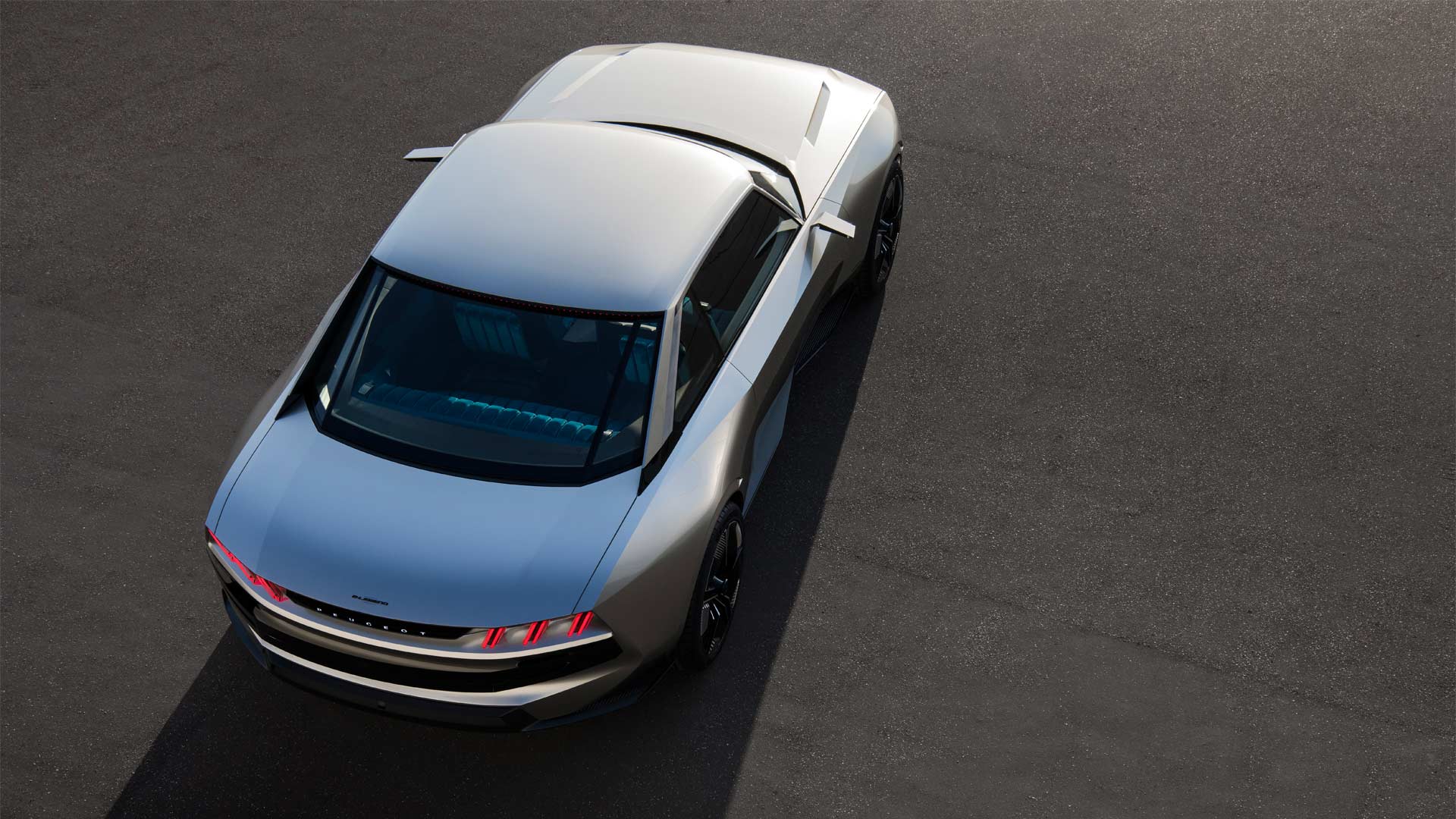 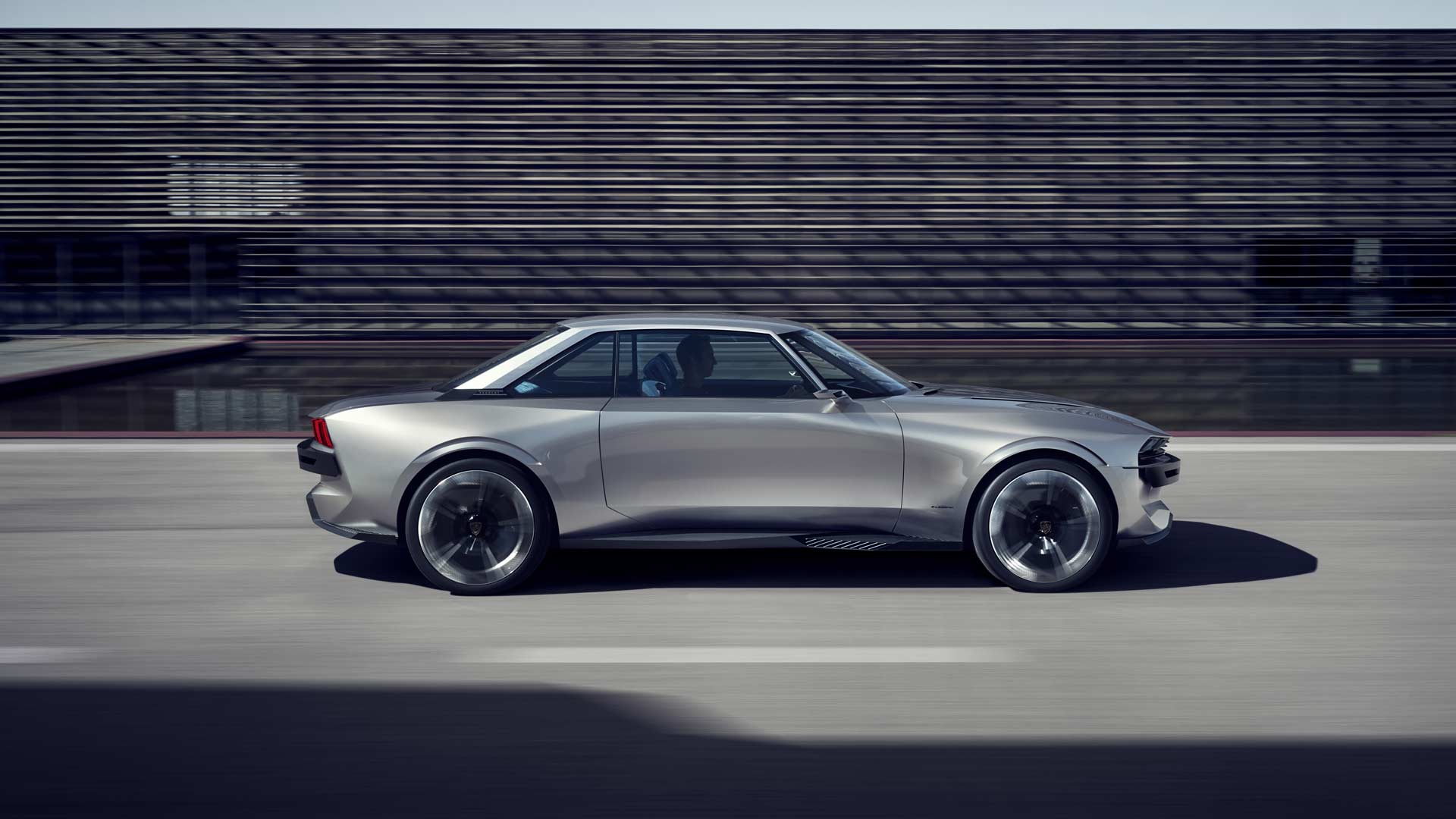 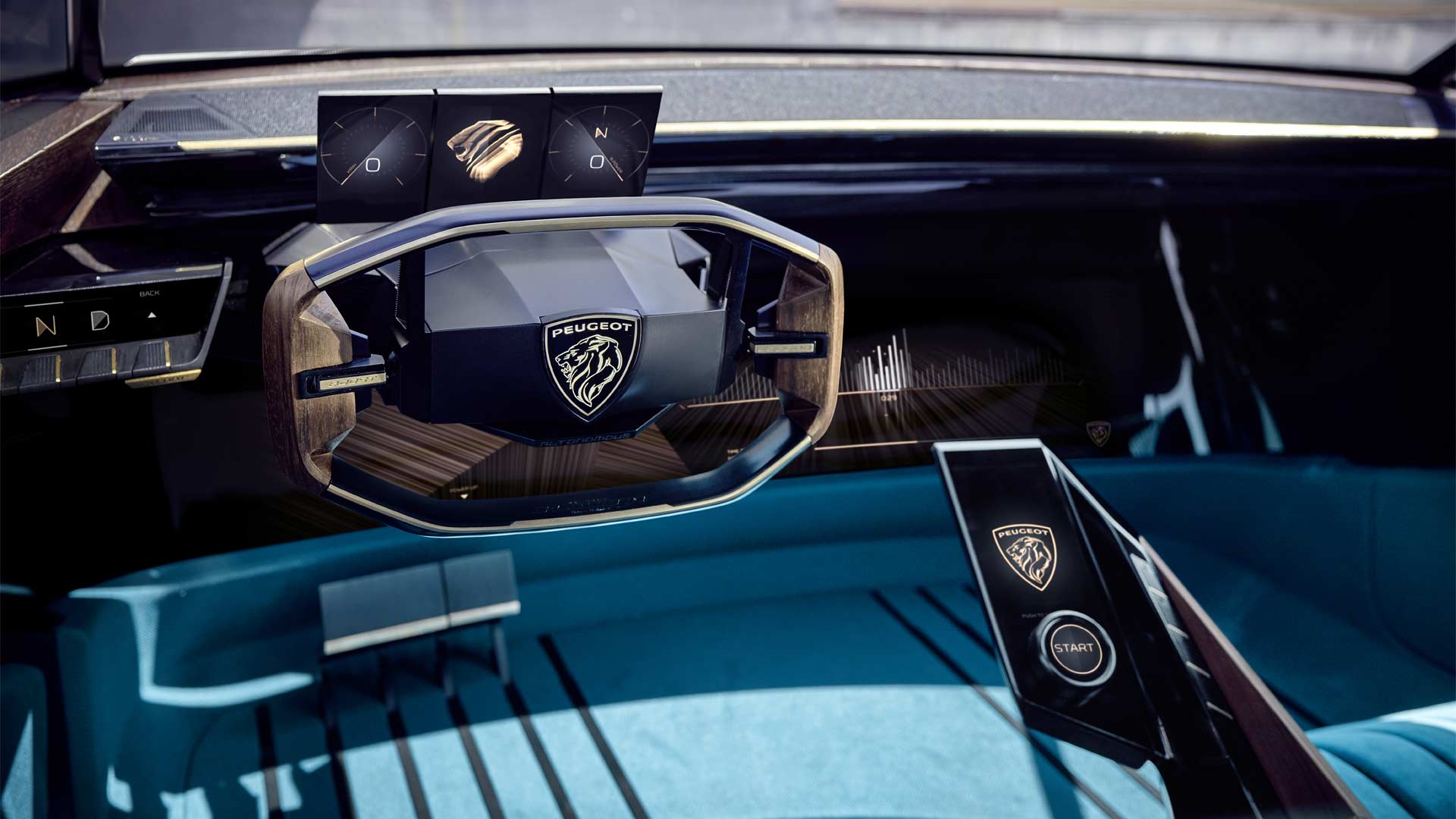 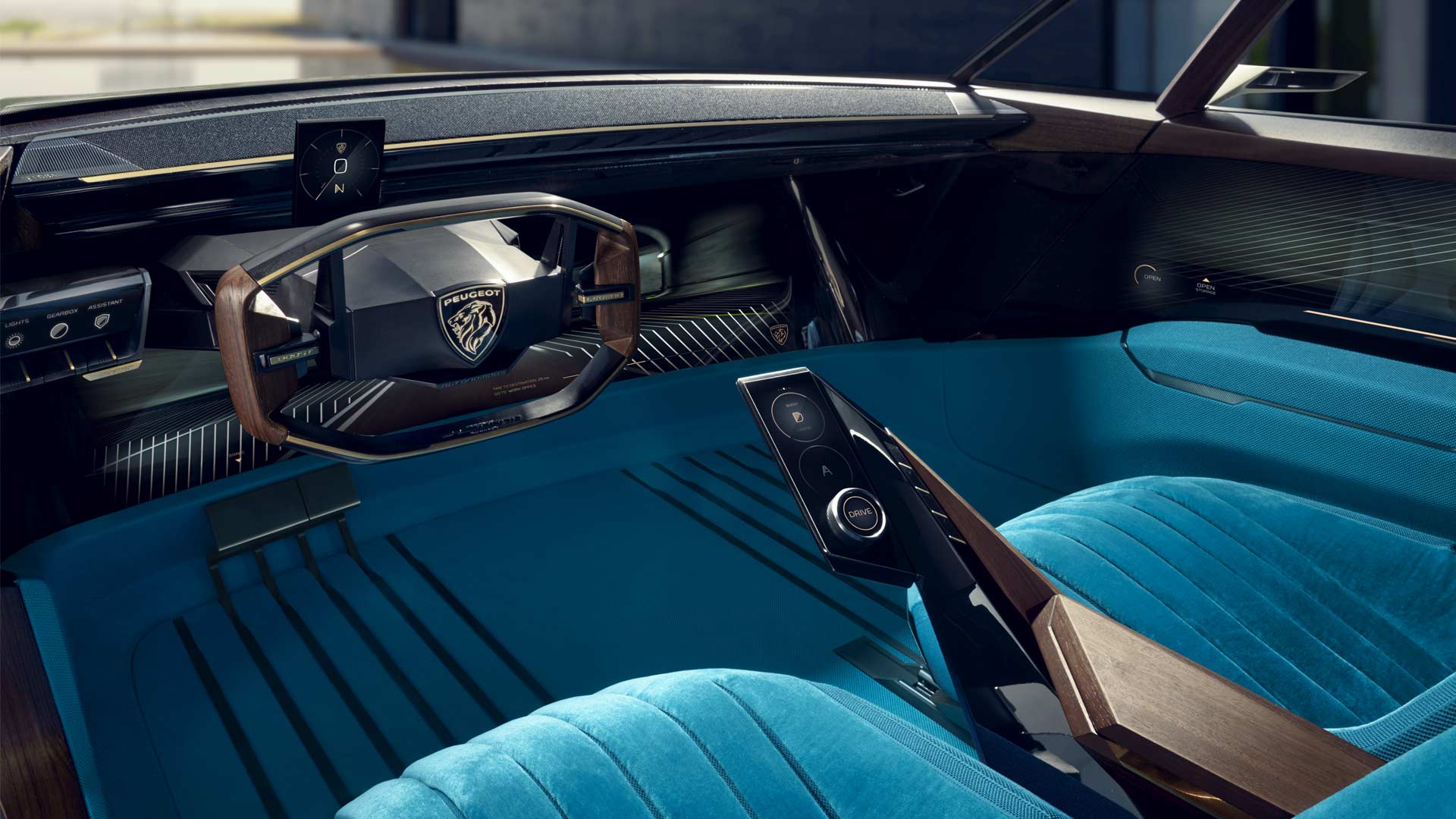 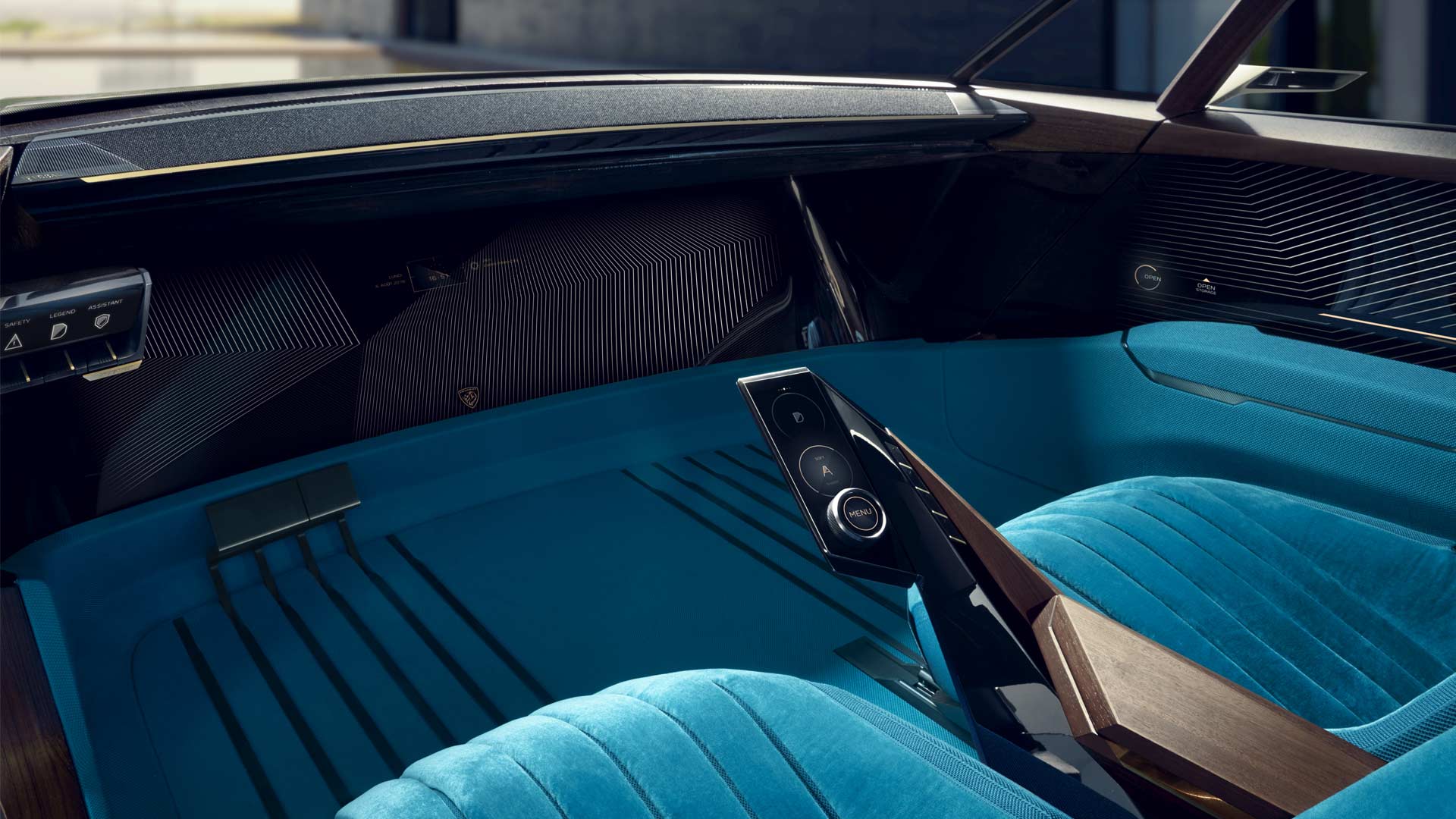 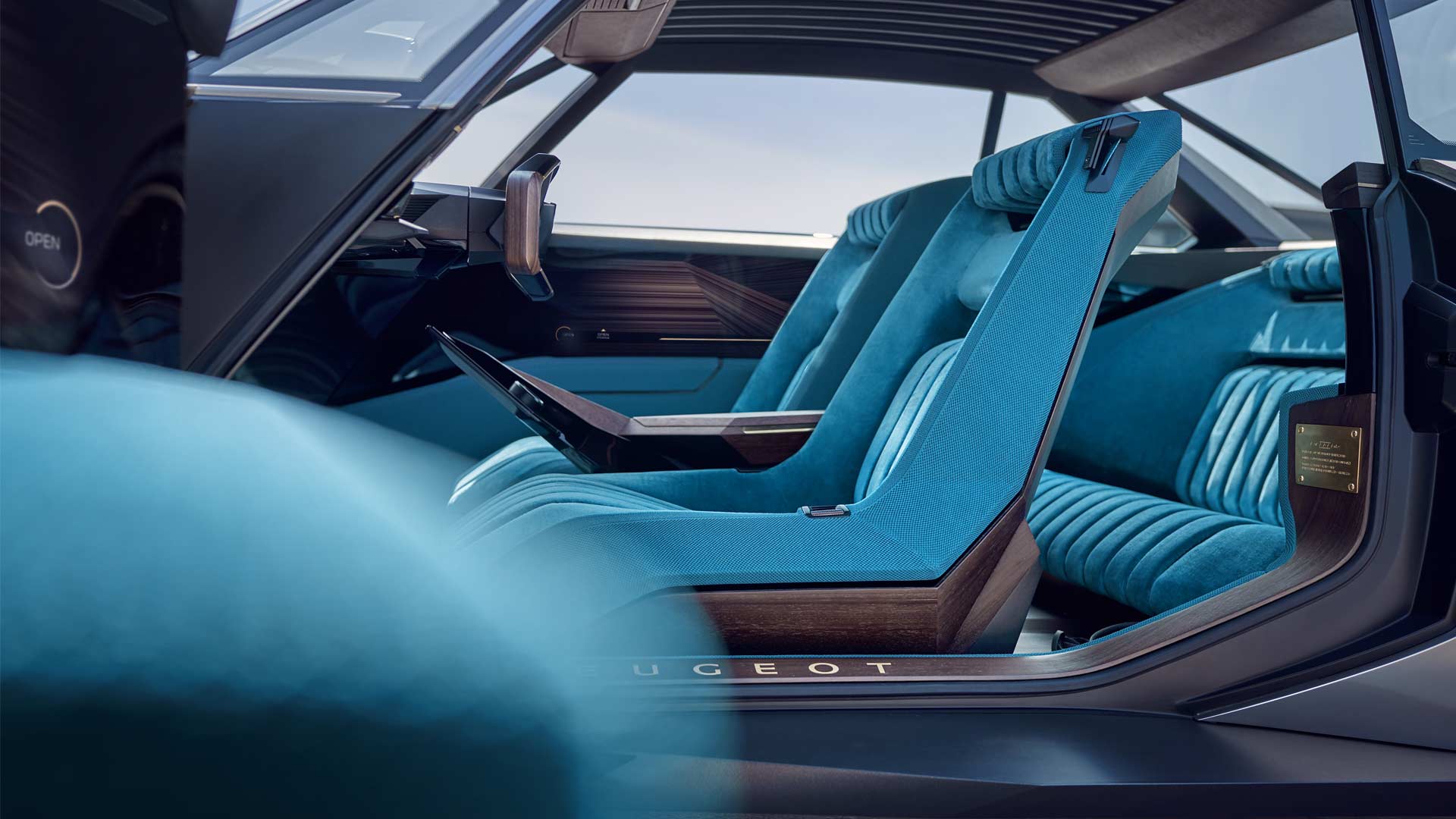