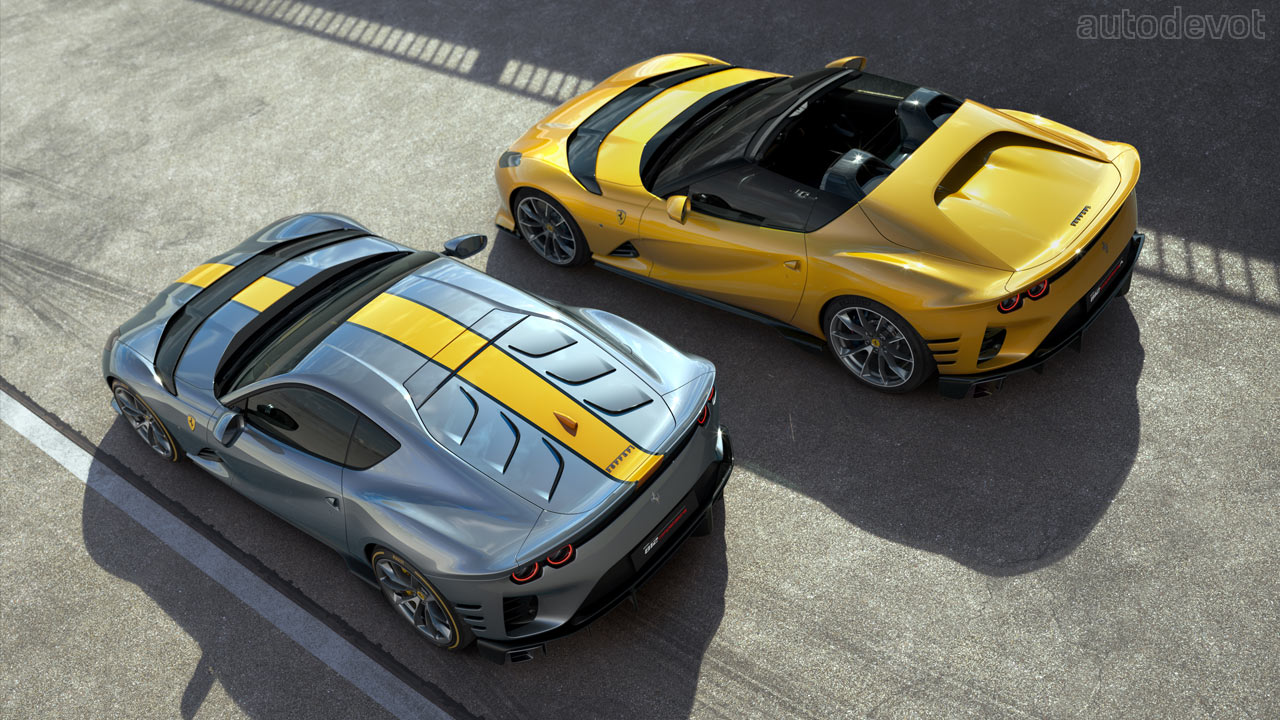 Don’t be surprised if chef Ramsay bought one

The limited-edition Ferrari supercar based on the 812 Superfast we saw a couple of weeks ago, has been officially named 812 Competizione. Of course, it gets a targa-top sibling named Competizione A (Aperta). While Ferrari didn’t reveal the pricing or exactly how many units of both coupe and targa-top versions are being built, it did say that the cars are “dedicated to a very exclusive group of collectors and enthusiasts”. So, don’t be surprised if all of those are already sold out and chef Ramsay bought one. 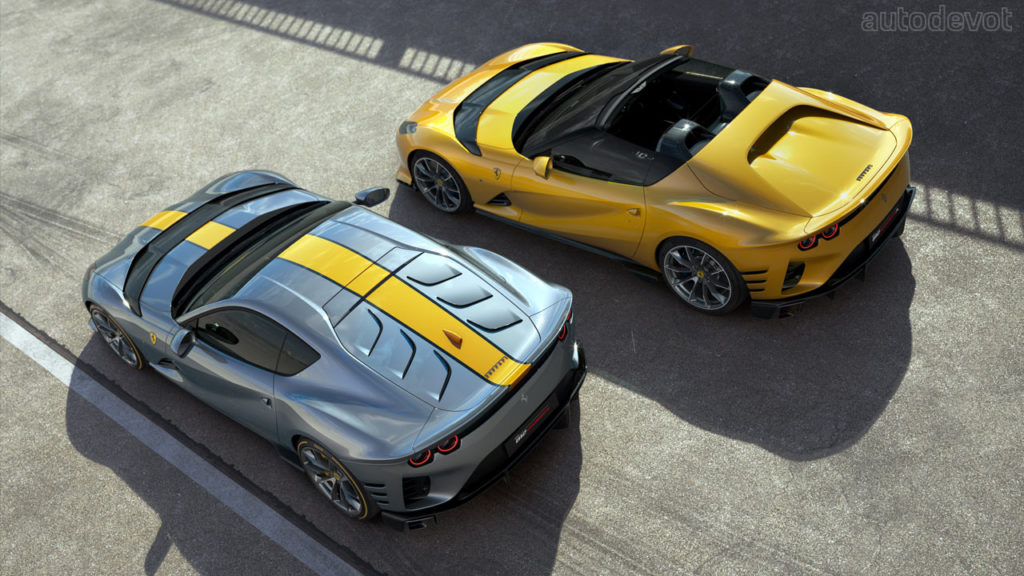 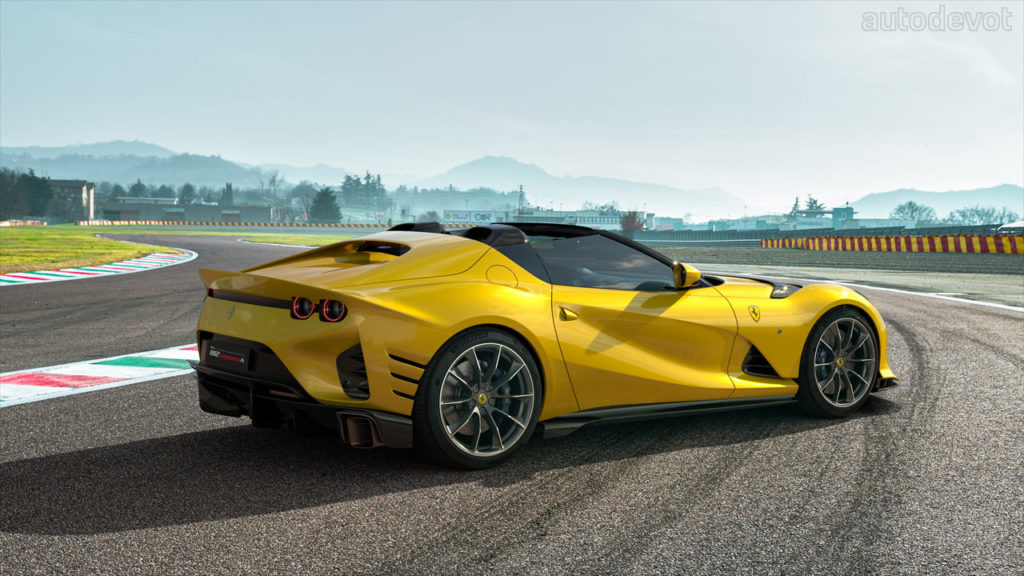 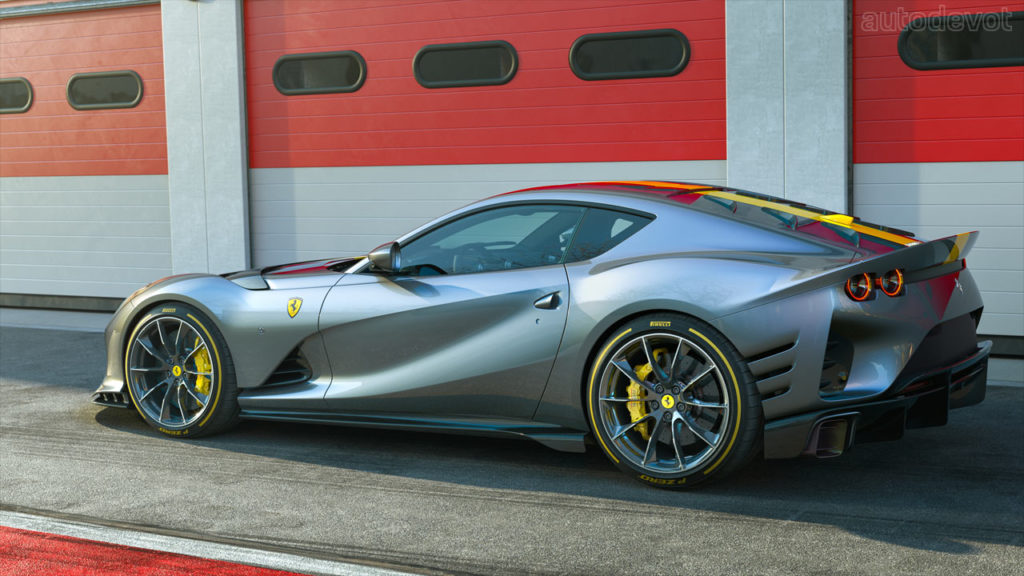 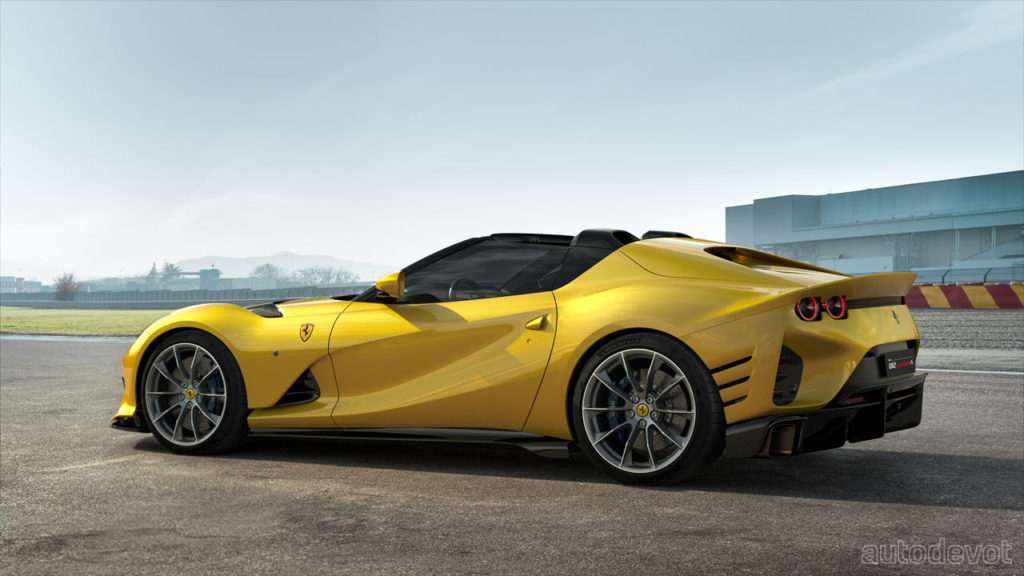 Of course, the big aerodynamic difference between the Competizione and the Competizione A is that the latter loses the rear aluminium panel with vortex generators, and compensating for that is a bridge element between the flying buttresses, which is claimed to effectively and efficiently deflect the flow towards the rear spoiler, essentially restoring the downforce to the same level as the Competizione.

Cooler brakes, more downforce
The revised aerodynamics of the Competizione models have resulted in better cooling of the brakes; Ferrari claims that the operating temperatures have been reduced by around 30°C compared to the brakes on the 812 Superfast. The brake sizes have been retained (398 mm front and 360 mm rear). The front underbody retains the aero flaps, which in the Competizione deploy at over 250 km/h (155 mph). Also, the optimized air vents are claimed to contribute to a 30% increase in overall front downforce while the new side vortex generators add a further 40%. The rear diffuser is claimed to produce 25% more downforce compared to the 812 Superfast; the flat underbody contributes to 10% of that increase. 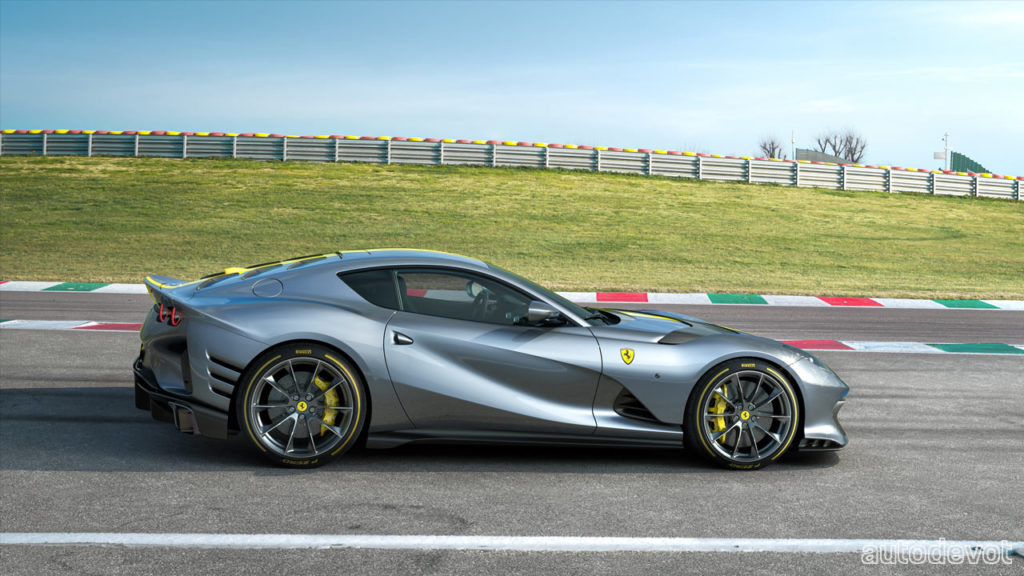 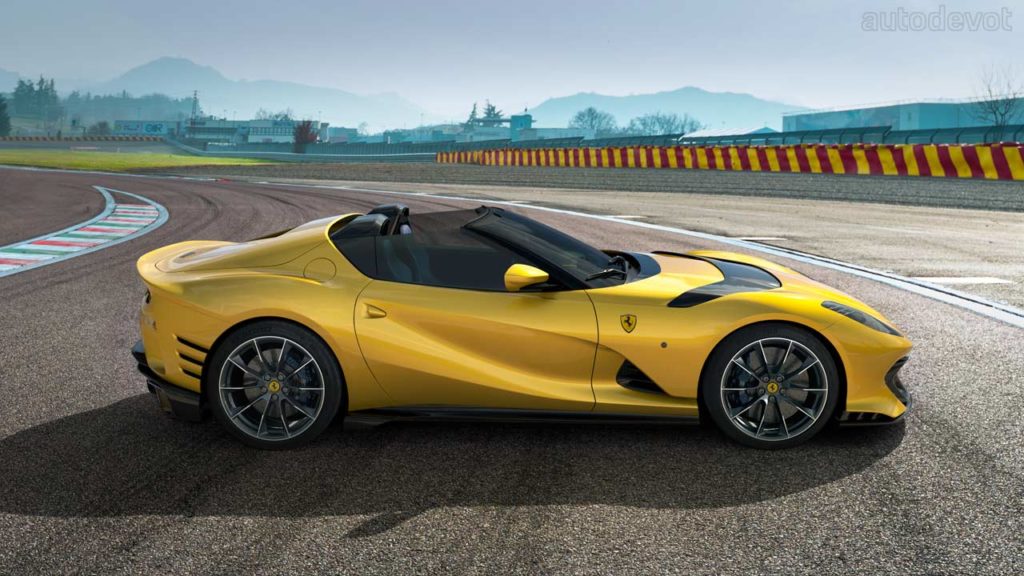 We also need to talk about the weight. With optional equipment including carbon-fibre rims which are 3.7 kg (8 lbs) lighter, the dry weight is claimed to be 1,487 kg (3,278 lbs) which is 38 kg (84 lbs) less compared to the 812 Superfast. Besides revised aerodynamics and carbon fibre parts, tweaks on the V12 powerplant have also contributed to the weight saving, which we’ll talk about in a bit. The 20-inch rims are wrapped with Michelin Cup 2 R tyres. 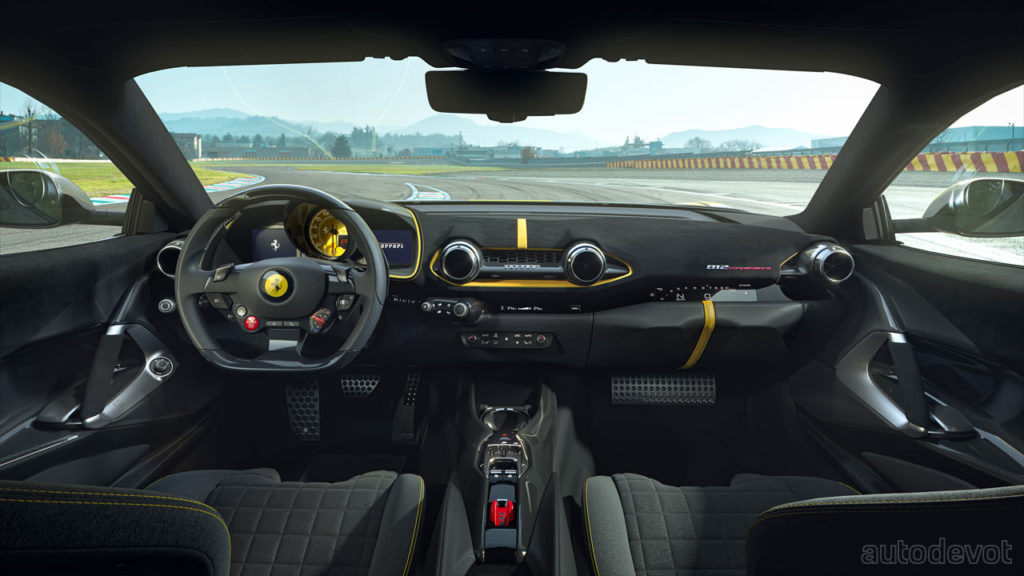 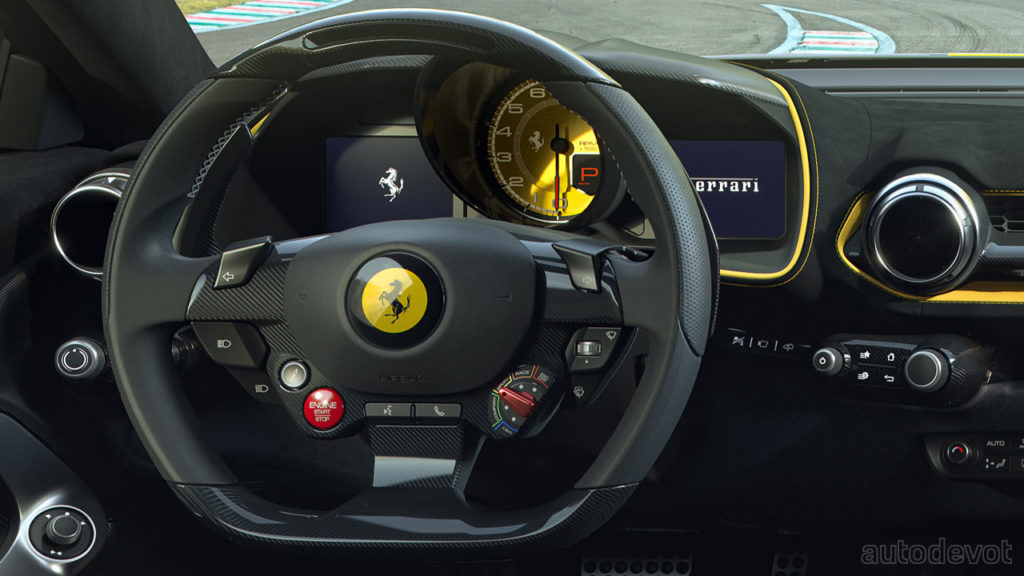 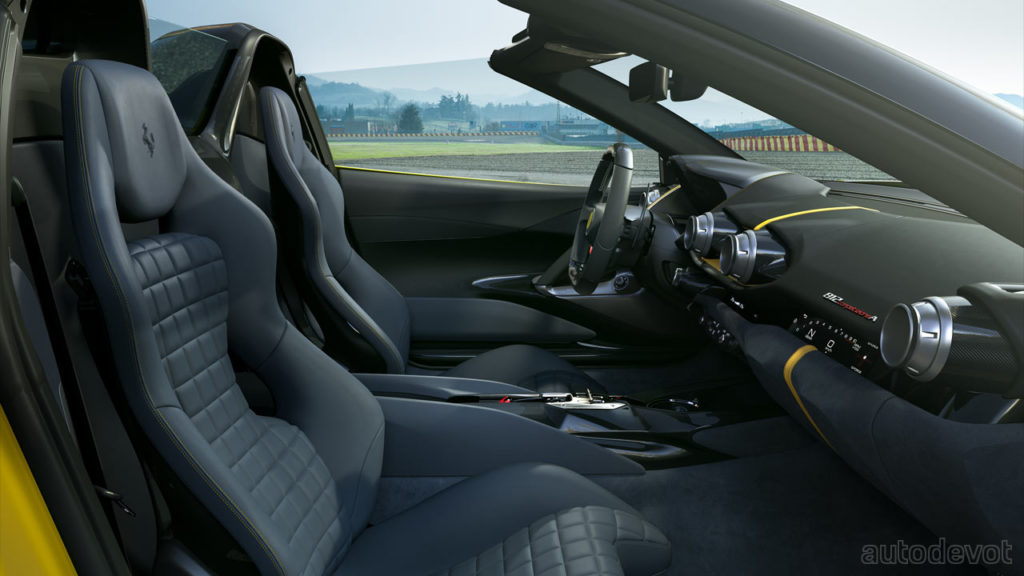 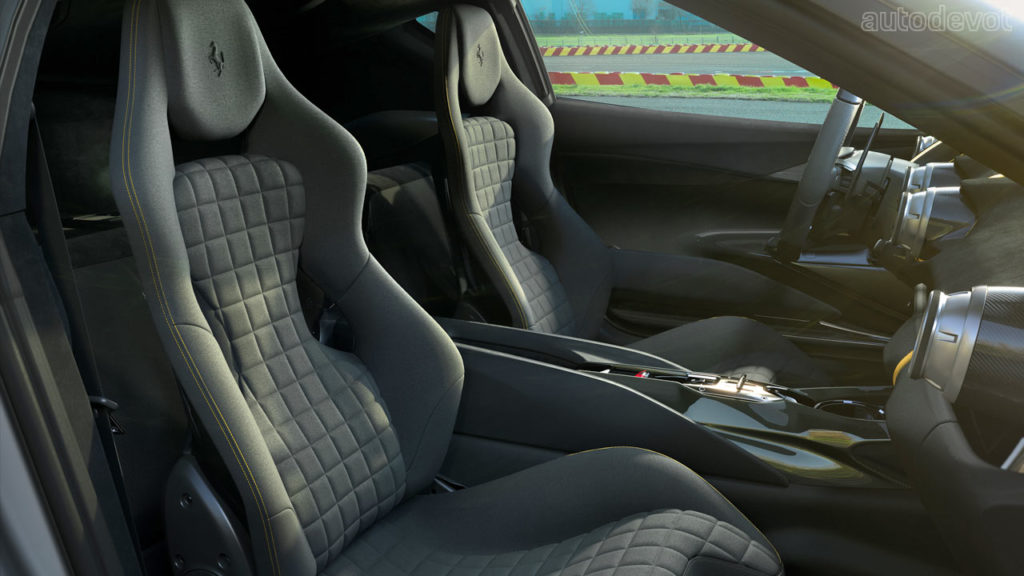 In the cockpit, the dashboard looks fairly identical to the 812 Superfast, however, it loses the aluminum bridge on the centre console that houses the R, Auto and Launch buttons; instead, the buttons are mounted directly onto the centre console. Notice the gated shift-mimicking gearbox controls we saw in the SF90 Stradale and Roma. The door cards have been kept simple in order to save weight.

As we read in the previous post, the Competizione gets version 7.0 of the Side Slip Control (SSC) vehicle dynamics system. The rear-wheel steering has been retained, however, it gets a new electronic management system that enables the right and left actuators to be activated individually rather than synchronized. 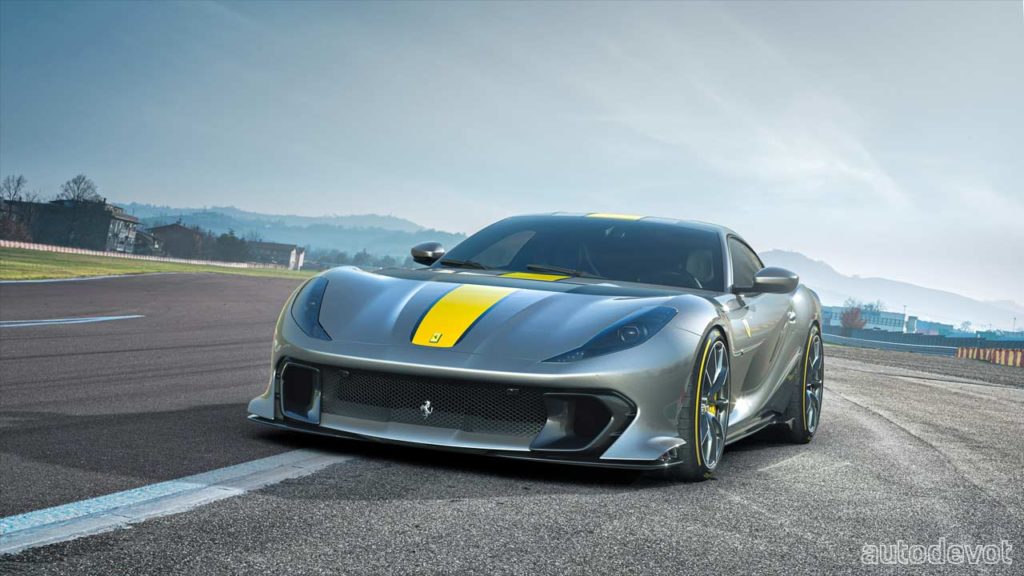 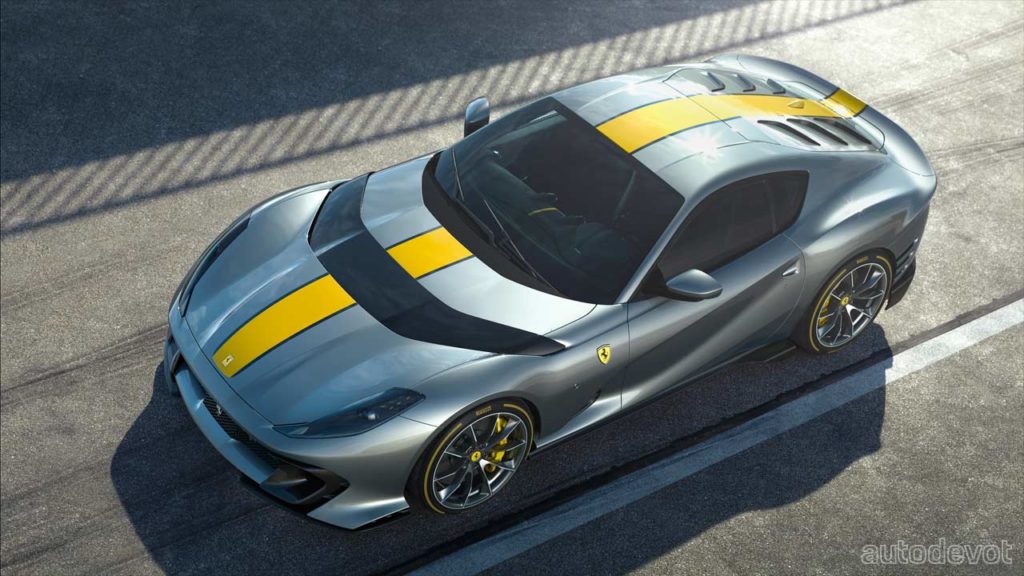 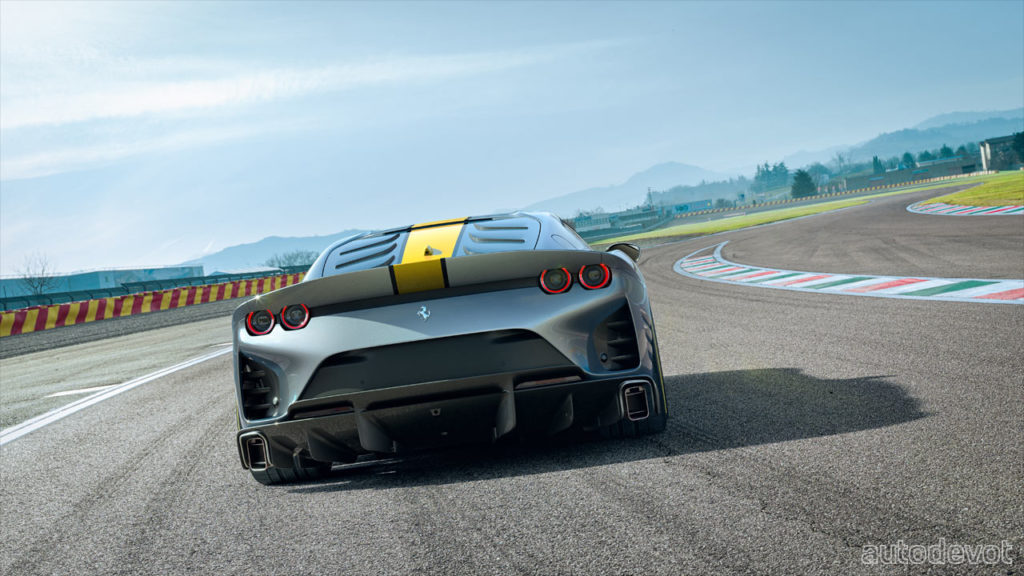 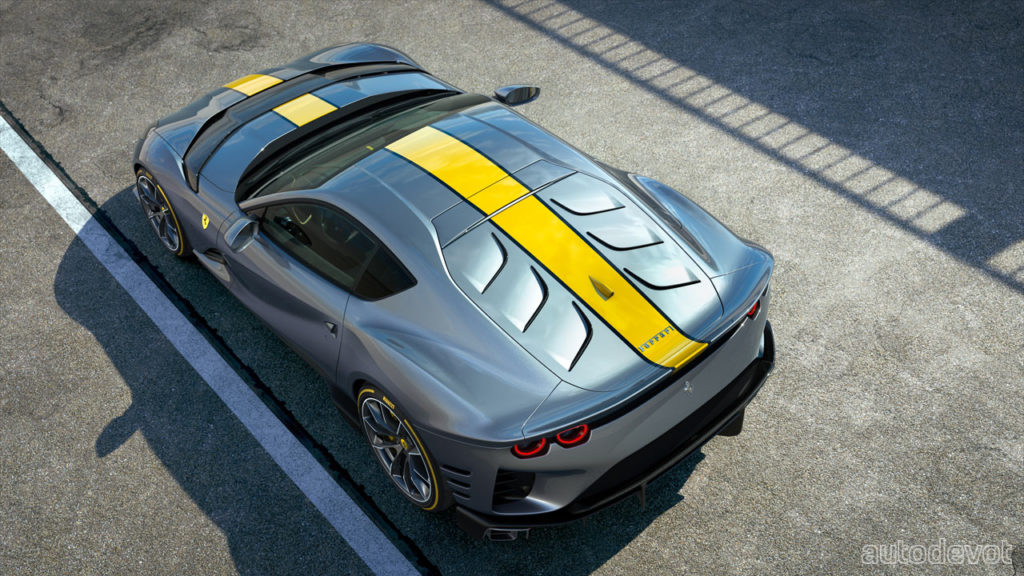 Moving on to the juicy bits of the story then, the re-worked 6.5-litre naturally aspirated V12 revs up to 9,500 rpm, which is 1,000 rpm more. The engine has received a number of modifications, including titanium con-rods that are 40% lighter than the steel counterparts; piston pins with diamond-like carbon (DLC) coating to reduce friction; a rebalanced crankshaft that is 3% lighter, and redesigned cylinder heads.

To ensure that the engine breathes correctly across the entire rev range, the intake system was redesigned: both manifold and plenum are now more compact to reduce the overall length of the tracts, thus delivering more power at high revs, while the torque curve is optimized at all engine speeds via a system of variable geometry inlet tracts.

Also, to improve the engine’s overall efficiency, the engineers developed a new variable-displacement oil pump that continuously adjusts oil pressure across the engine’s entire operating range. Last but not the least, the engine oil tank was redesigned to cope with the extra flow (up by 30%) and with the car’s greater lateral and longitudinal acceleration.