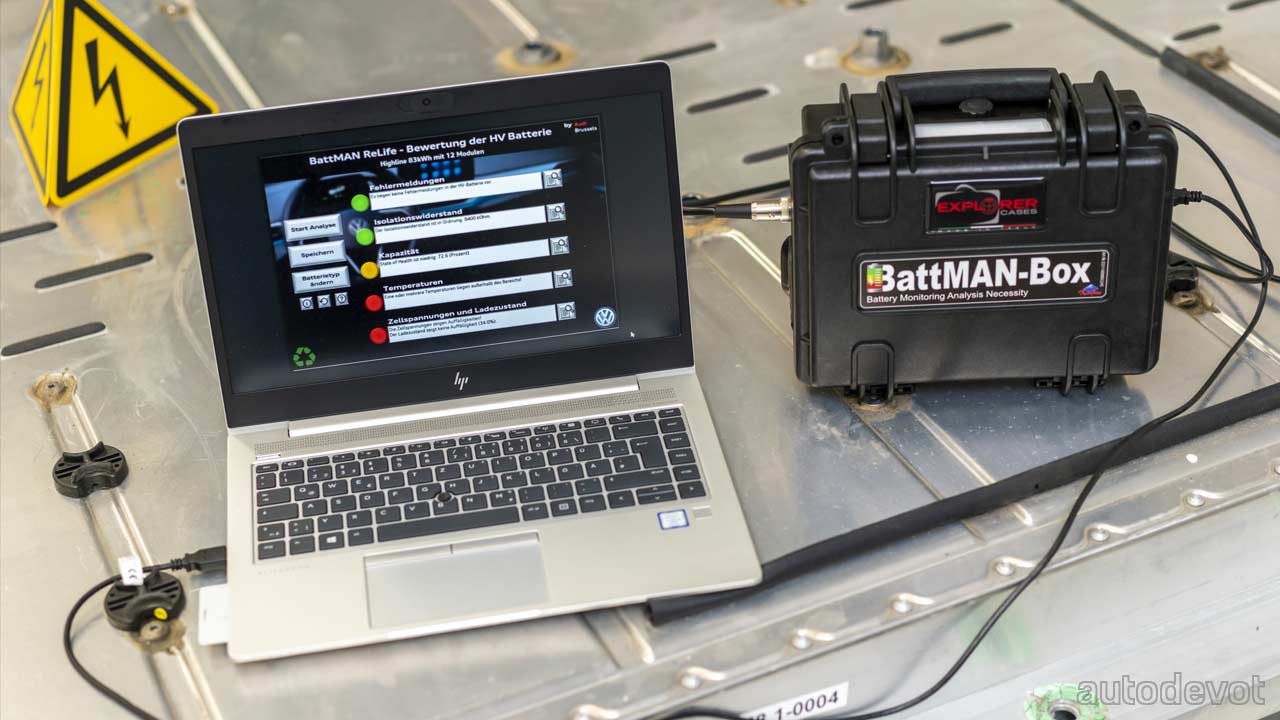 The other day, the double-A batteries that were powering my laser pointer (that I use for quantum mechanics experiments) appeared to have lost some energy, since the beam intensity was pretty low. And so, I decided to give those batteries a second life by employing them in a wall clock. The same idea can be applied to the battery pack inside an electric vehicle that has reached the end of its service life. No, you can’t use those cells to power wall clocks, but the battery pack can be given a second life as a mobile or a stationary energy reservoir, for example, before sending off for recycling.

So how do you determine that the battery pack is good to receive a second life? Well, apparently, Audi Brussels’ quality management department has developed a software called BattMAN (Battery Monitoring Analysis Necessity) for that exact job. It was initially developed to analyze the e-tron’s battery and is now used as a diagnostics tool by VW Group brands. BattMAN underwent further development in association with recycling experts at Volkswagen Group Components and took on a new name BattMAN ReLife, and is now said to analyze a battery pack in just a few minutes versus several hours it took previously.

After plugging in the low-voltage connectors, the device first checks whether the battery pack is even able to communicate and transfer data. The system then detects and displays any error messages as well as insulation resistance, capacity, temperatures, and cell voltages. “We are able to measure all a cell’s most important parameters. Then a traffic light system indicates the status cell by cell – green means a cell is in good order, yellow means it requires closer inspection, and red means the cell is out of order,” explains Axel Vanden Branden, Quality Engineer at Audi Brussels.

If a battery pack is found to be very healthy, the whole of it or part of it can be used as a replacement part for electric vehicles. The second option is, of course, the so-called second life, when the battery pack is rated medium-level to a good state of health. In this case, the battery can be used in a mobile charging robot, a driverless transportation system, a forklift, or even to power a home. And if the battery pack doesn’t qualify for a second life, the only option left is to sending it to Volkswagen Group Components’ pilot plant in Salzgitter to be recycled.