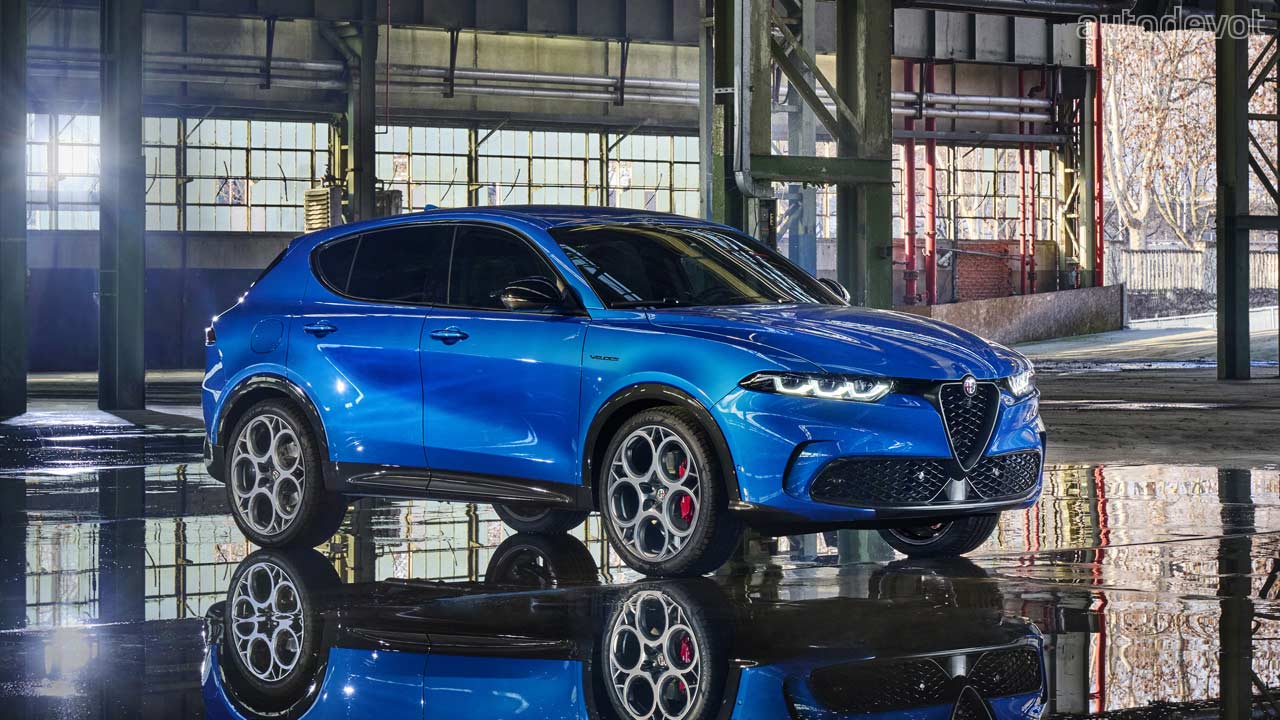 Alfa Romeo has taken the wraps off the production version of the Tonale, the brand’s first plug-in hybrid vehicle. The Tonale will also be available with a mild-hybrid powertrain, but will talk about that in a minute. Pricing is yet to be announced, but the order books will open in Europe in April 2022 with a special launch edition called Edizione Speciale. In case you missed the whole thing, the Tonale made its debut as a concept at the 2019 Geneva Motor Show, and Alfa Romeo has taken nearly 3 years to bake the production version, which is fairly understandable considering all the nonsense that started in fall 2019. 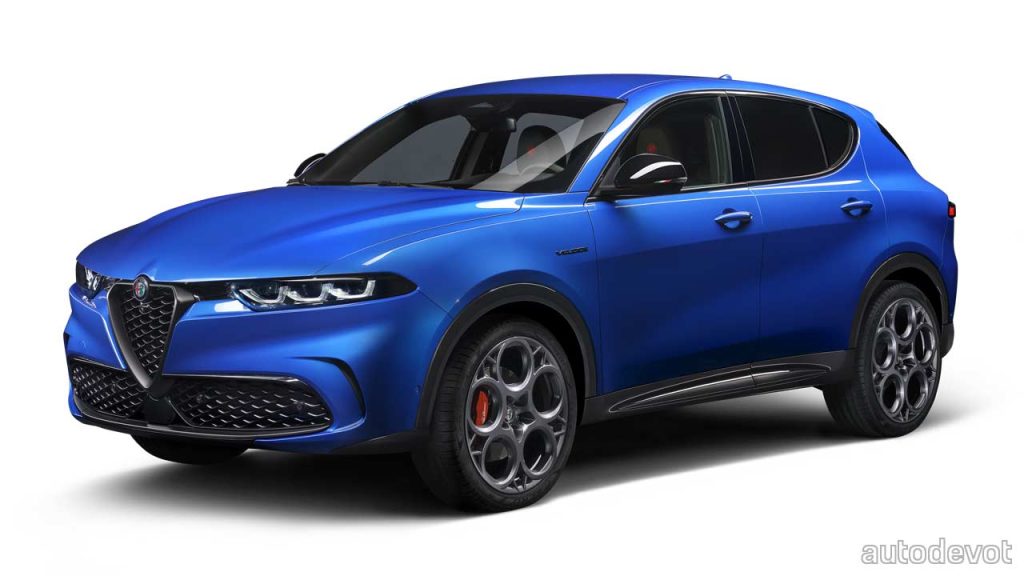 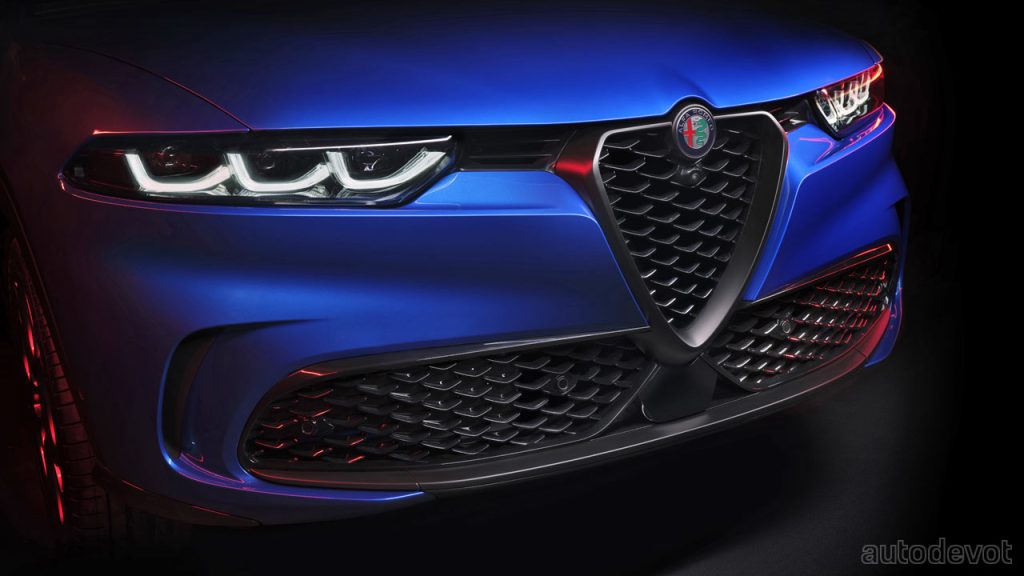 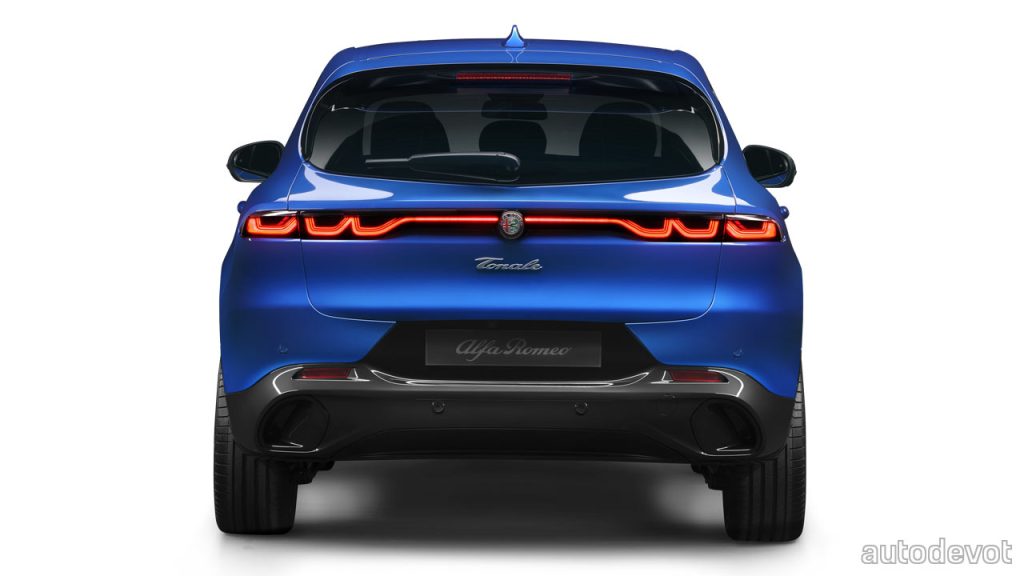 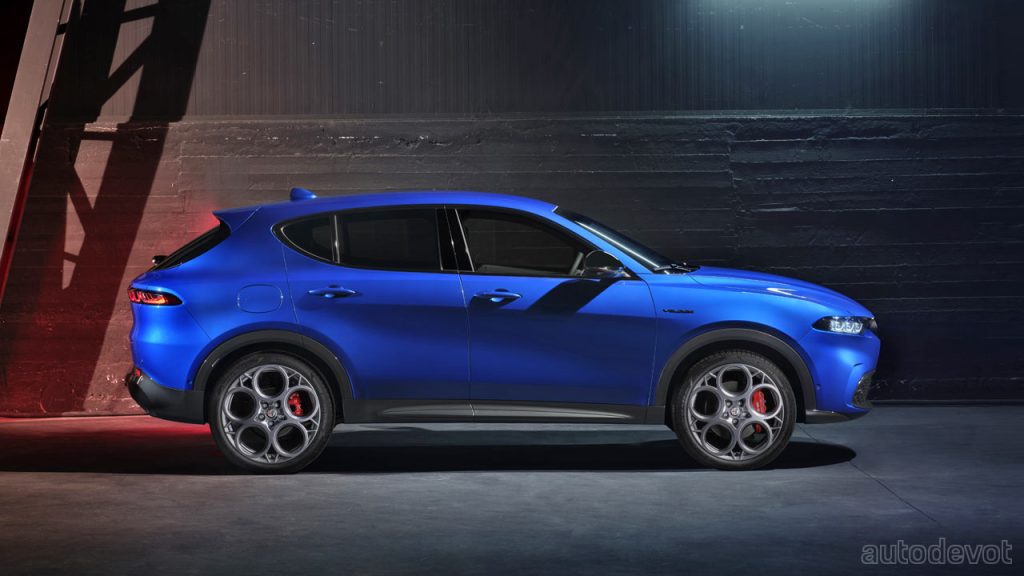 Alright then, let’s talk a li’l bit about its styling; just a li’l bit because the production model appears to retain most of the styling elements from the concept, including the shape of the front & rear 3D light signatures and the “teledial” design of the alloy wheels. The headlights are Adaptive Matrix LEDs. Depending on the variant, the wheel sizes range from 17- to 20-inches. Obviously, the Tonale gives off a li’l bit of Stelvio and Levante vibes, but maybe that’s just me. A quick briefing over the dimensions for those interested to know: the Tonale measures 4.53 metres long, 1.84 metres wide and 1.6 metres tall.

As for suspension, a fully independent MacPherson setup with Frequency Selective Damping (FSD) shock absorbers is standard, while Alfa Active Suspension with electronically controlled damping will most likely be an optional extra. As for braking, the Tonale adopts the Integrated Brake System (IBS), claimed to be unique in its class. The discs are gripped by 4-piston Brembo fixed calipers. 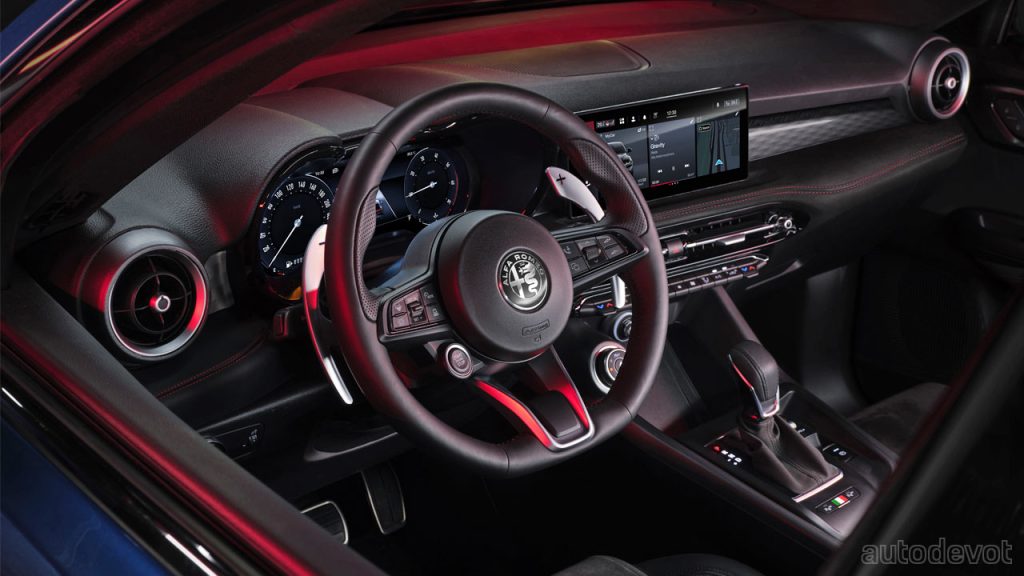 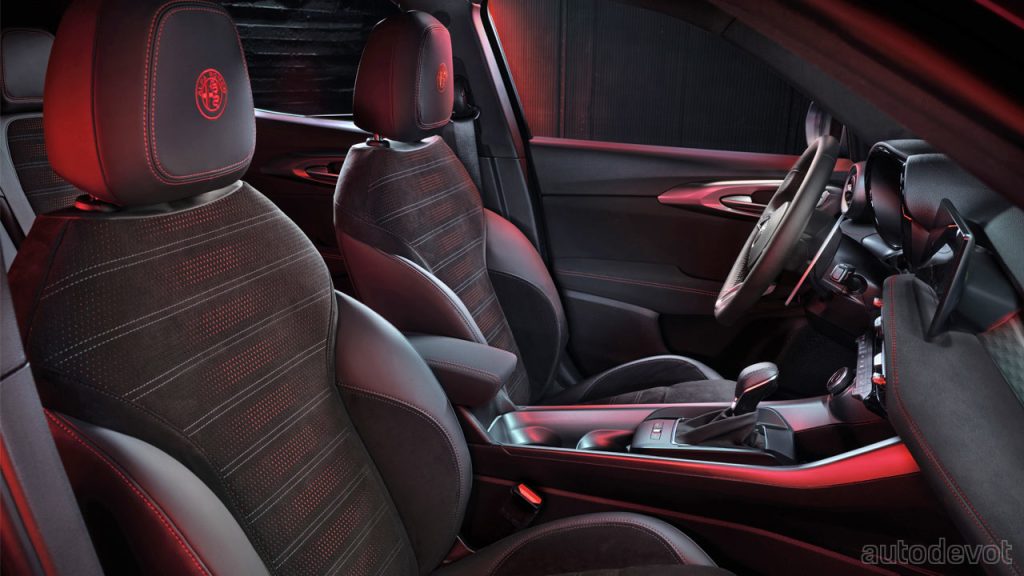 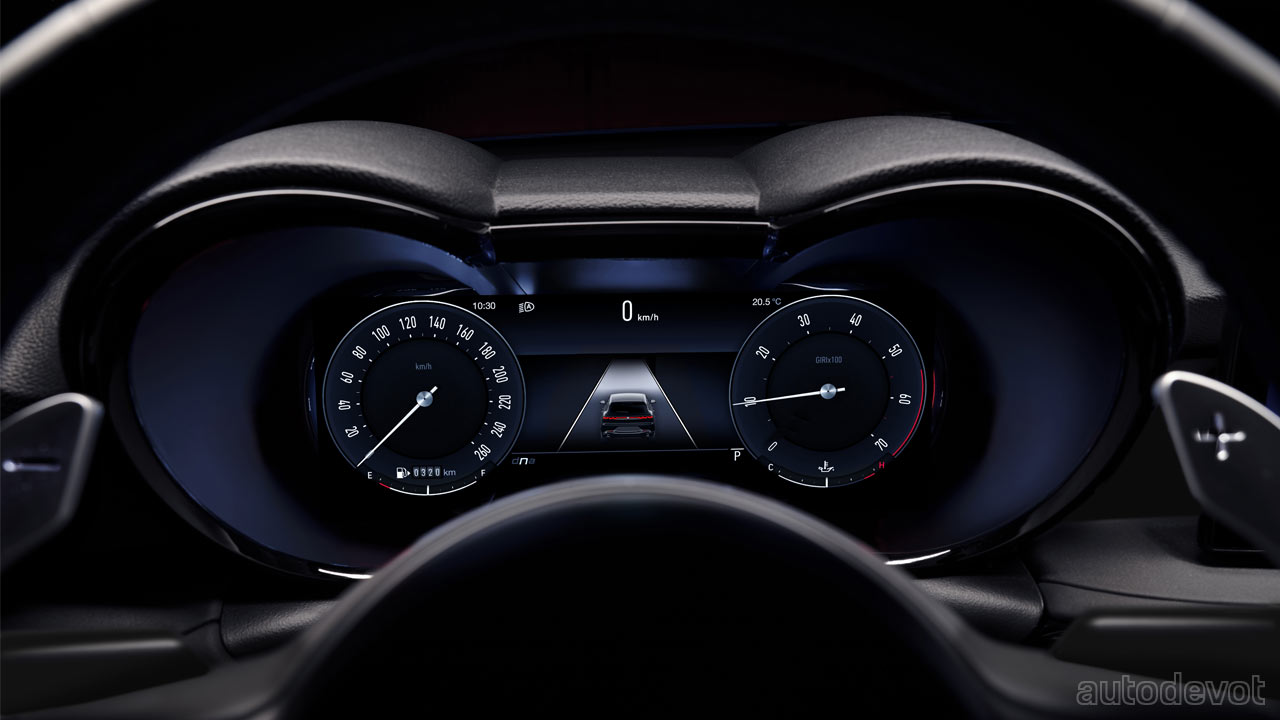 Inside, the production Tonale looks a lot different compared with the concept, understandably. It doesn’t get those crazy translucent backlit panels. However, the features list includes a 10.25-inch central touchscreen, Apple CarPlay & Android Auto connectivity, Alexa voice service, a 12.3-inch digital driver display, a 14-speaker Harman Kardon audio system, dual-zone climate control, ventilated & heated front seats, a wireless smartphone charging pad, and all the usual ADAS stuff such as Adaptive Cruise Control, Lane Assist systems, Blind Spot Detection, Drowsy Driver Detection, Rear Seat Reminder, and many more. The Tonale also offers a Semi-Automatic Parking system—which indicates the space available to park in and performs the entry and exit maneuvers itself. And nobody asked for this, but the Tonale also comes with an NFT digital certificate. 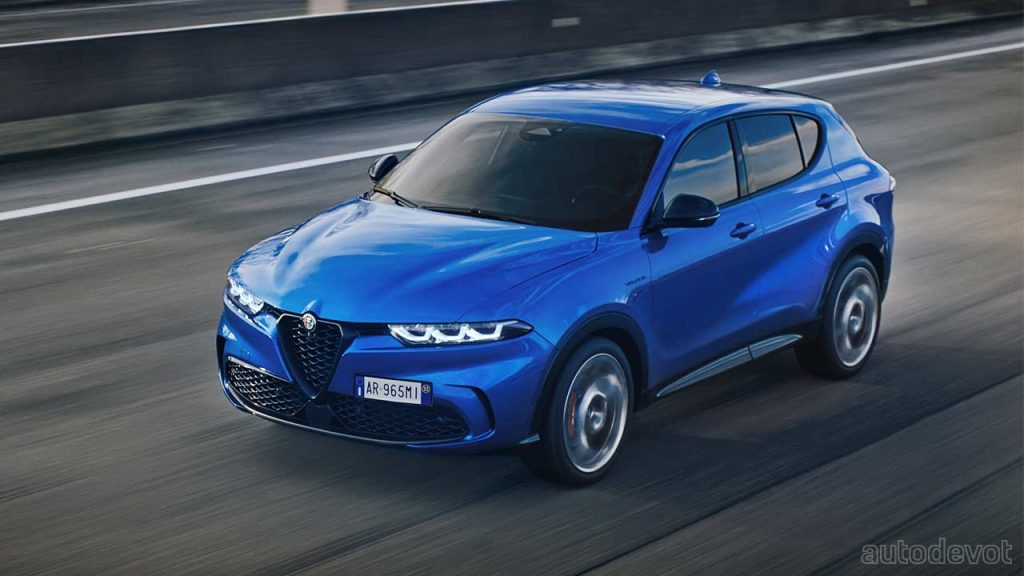 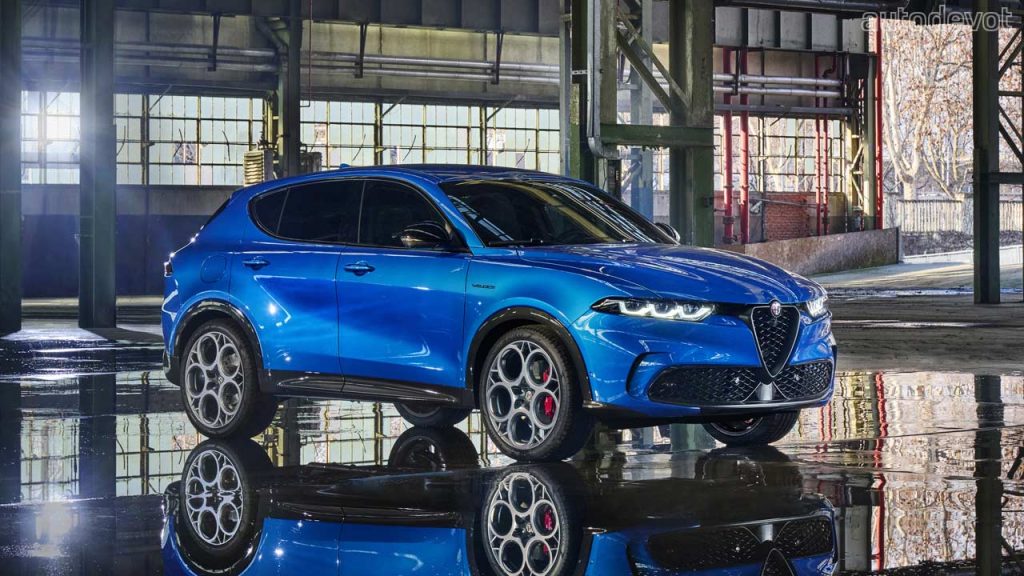 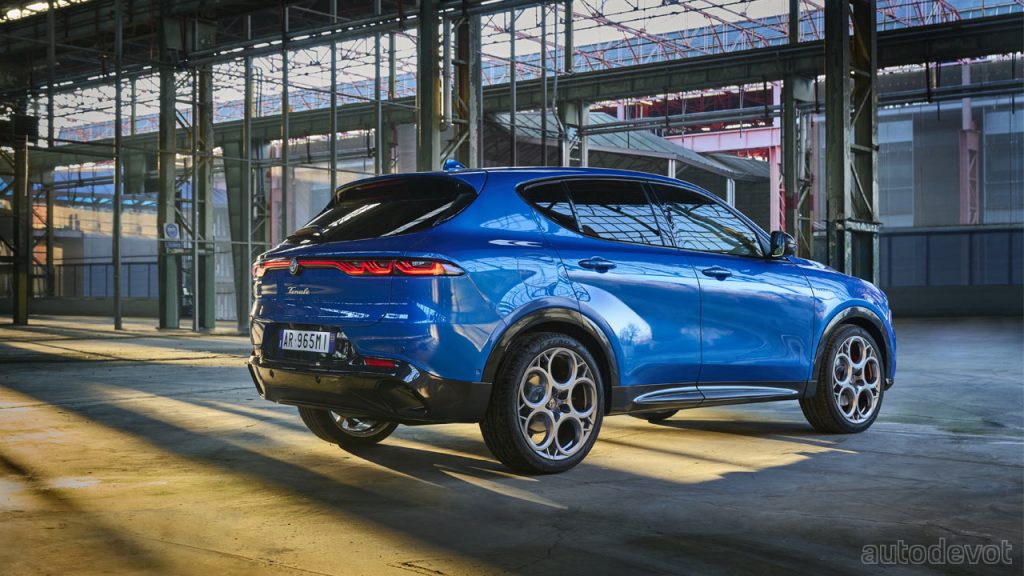 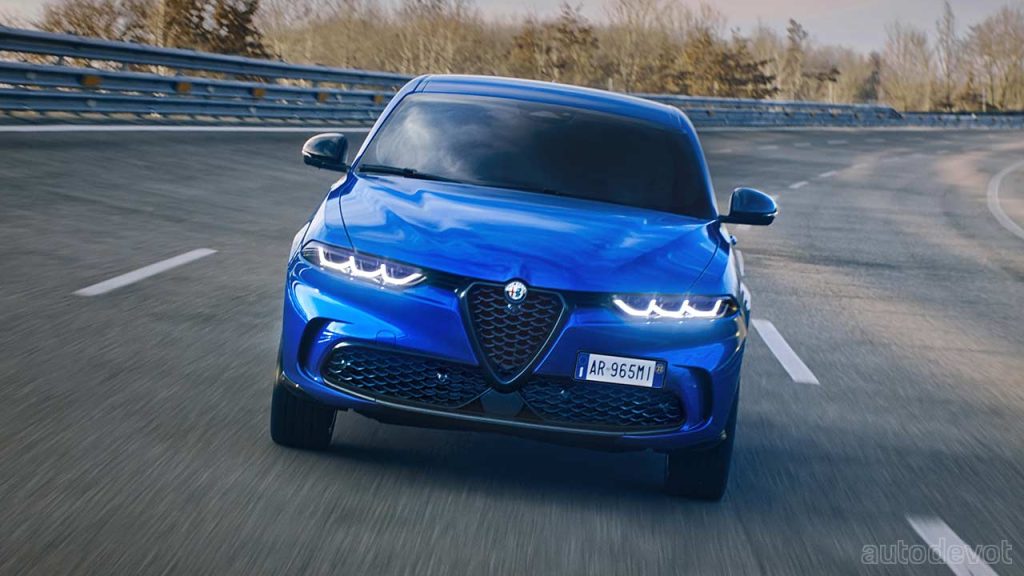 Alfa also claims that the Tonale has the most direct steering in the segment (13.6). But anyway, moving on to the juicy bits of the story, the options start with a 1.5-litre 4-cylinder turbocharged petrol engine combined with a 48-volt mild-hybrid system—the exact same setup found in the Jeep Renegade e-Hybrid. A 15 kW (20 metric hp) electric motor can perform low-speed maneuvers. The gearbox is a 7-speed DCT. This setup will offer two output options: 130 metric hp and 160 metric hp.

For those who like to plug-in, the Tonale offers a combo of 1.3-litre 4-cylinder turbocharged petrol engine and an electric motor on the rear axle—a setup similar to that of the Jeep Renegade 4xe. However, the combined output here is a little higher: 202 kW (275 metric hp). Transmission is a 6-speed automatic. The Tonale Hybrid Q4 also packs a larger 15.5 kWh battery pack that is claimed to offer a pure electric range of up to 80 km (50 mi) in the city cycle and over 60 km (37 mi) in the combined cycle. The variant also boasts an official 0-100 km/h (62 mph) sprint time of 6.2 seconds.

For those who don’t want any of this, the Tonale won’t mind offering a 130 metric hp 1.6-litre diesel engine paired with a 6-speed DCT that drives the front wheels.