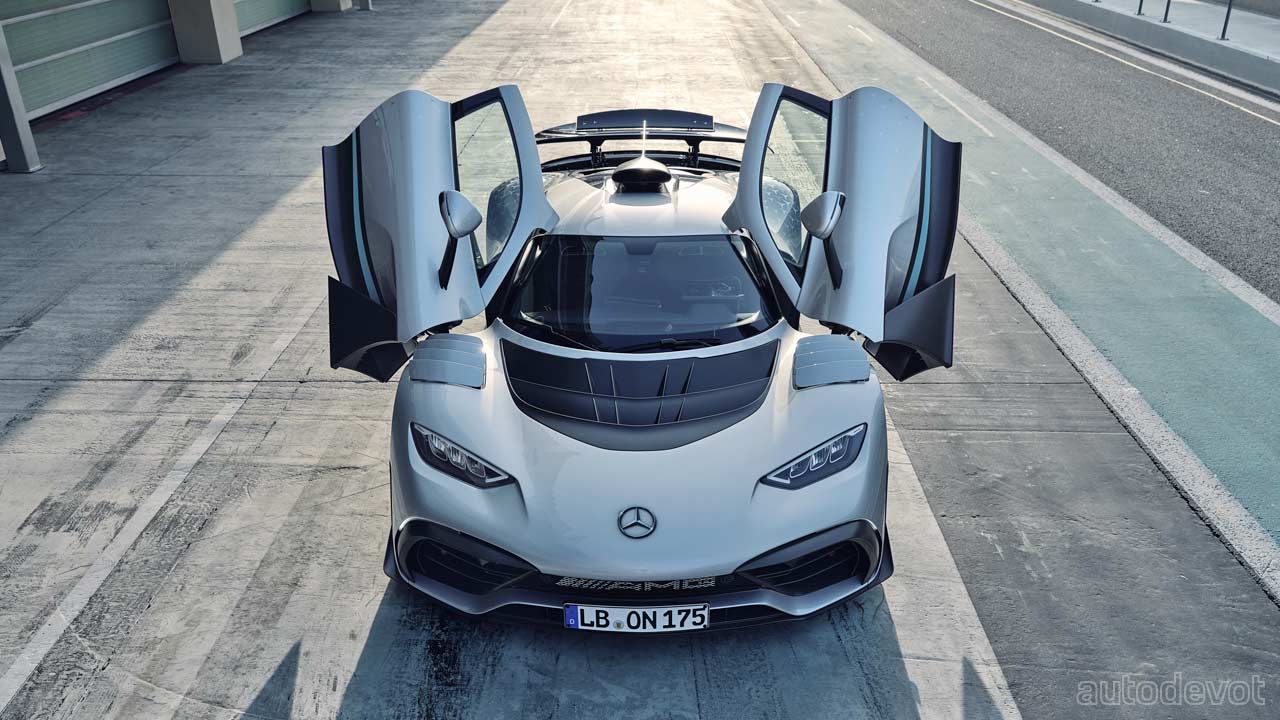 Another special ONE for AMG’s 55th anniversary celebrations

Apparently, the Formula 1 experts at the Mercedes-AMG High Performance Powertrains division in Brixworth, UK, have finally figured out a way to get the bratty F1 engine to behave on public roads. It has been nearly 5 years since the Mercedes-AMG ONE made its debut as Mercedes-AMG Project One, but the production version is finally here. The PHEV hypercar will make its public debut for the first time at the Goodwood Festival of Speed later this month (23 to 26 June 2022). In case you’re hearing about the car for the first time, well, the production is capped at 275 units, with all of ’em sold-out even before the car was revealed to the general public in 2017. 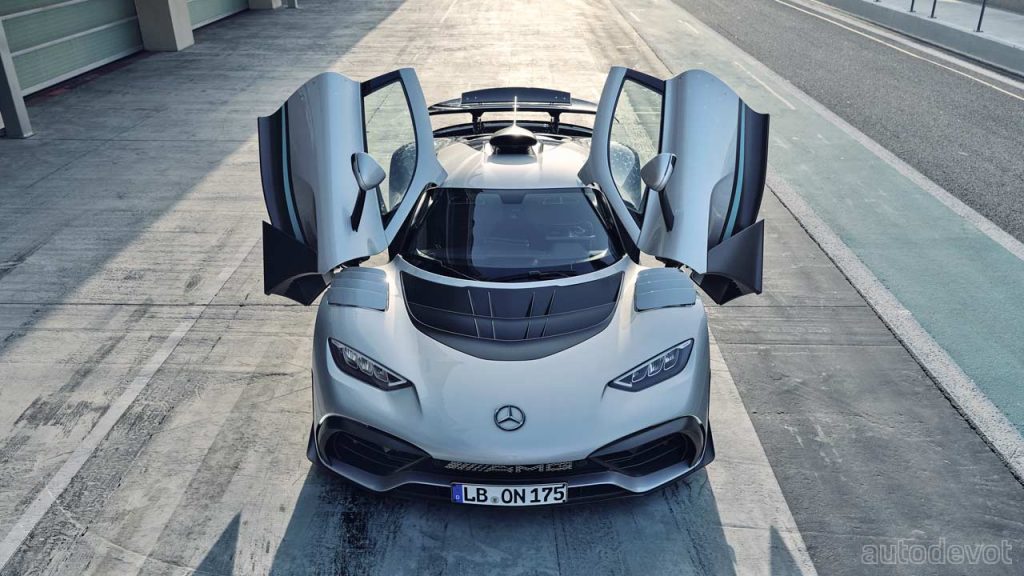 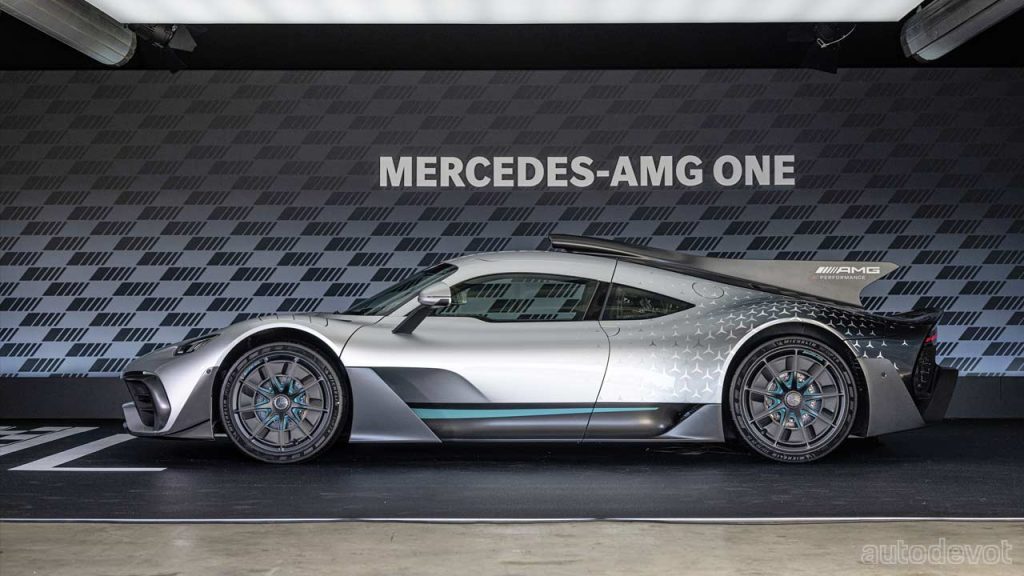 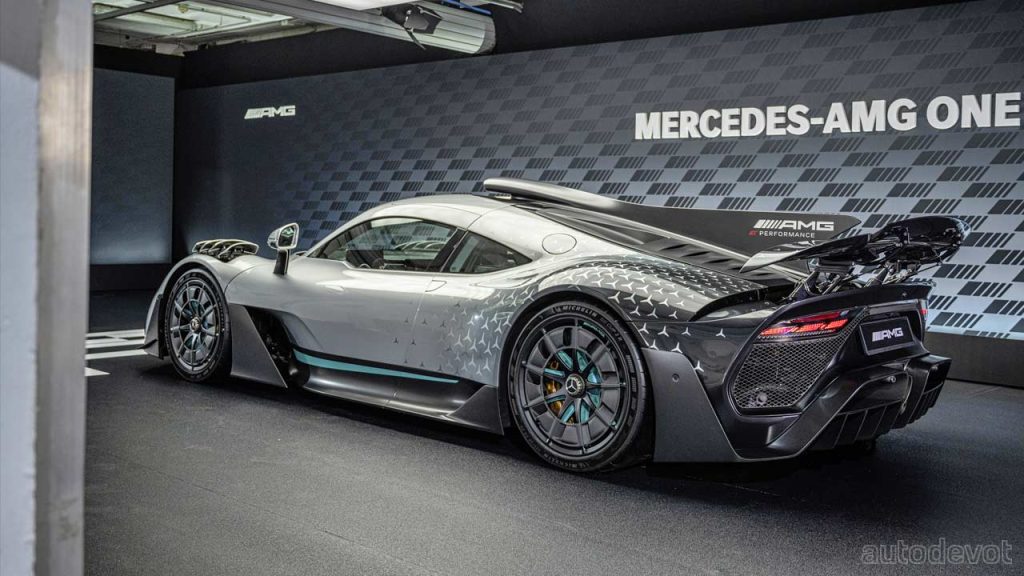 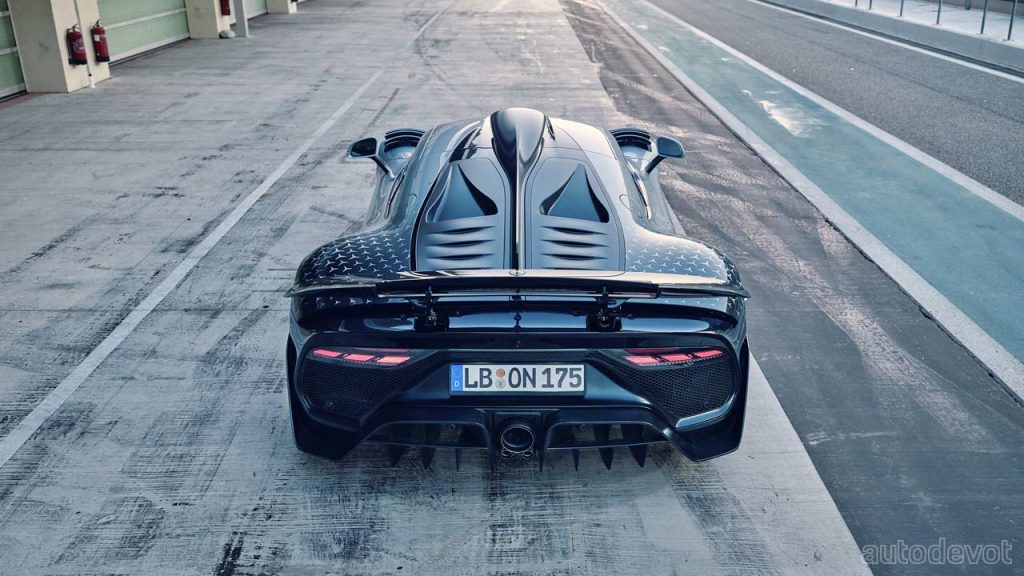 And so, the production version looks just as wild as the prototype looked back in 2017. All the louvres, gaps, gapes, swooshes, naca duts and active elements have been retained. Check out more photos here. The differences you see are probably the wheels, which now have been partially covered with carbon fibre for aerodynamic reasons. 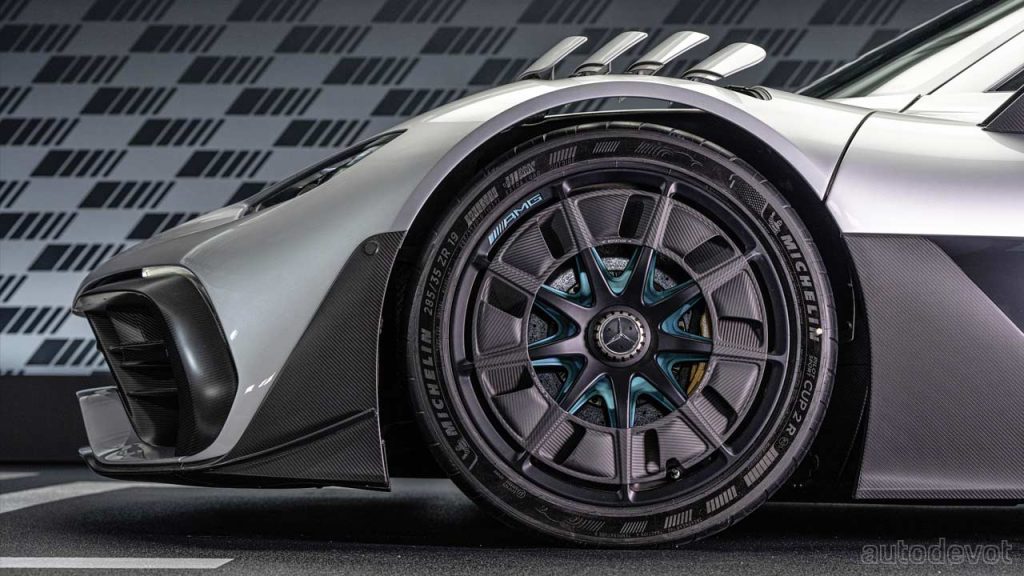 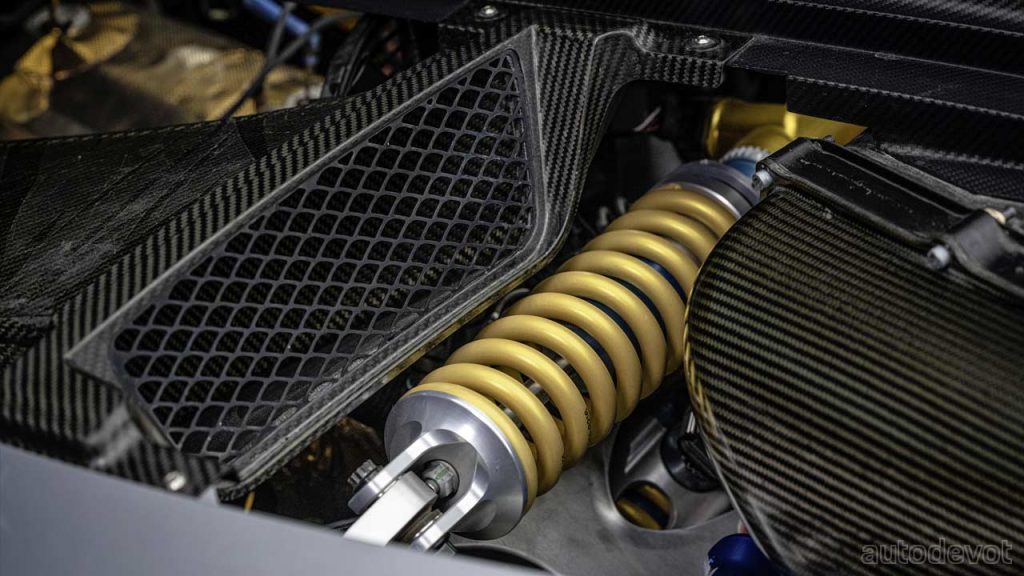 The wheels measure 19-inch at the front and 20-inch at the rear, wrapped with Michelin Pilot Sport Cup 2R M01 tyres, which were exclusively developed for the hypercar. For those who don’t fancy the standard 10-spoke forged aluminium wheels, there are the optional 9-spoke magnesium forged wheels. Behind the wheels, there are carbon-ceramic discs measuring 398 mm at the front and 380 mm at the rear. As for suspension, both axles get five-link aluminium coil-overs with two transverse adjustable push-rod struts and adaptive damping adjustment. 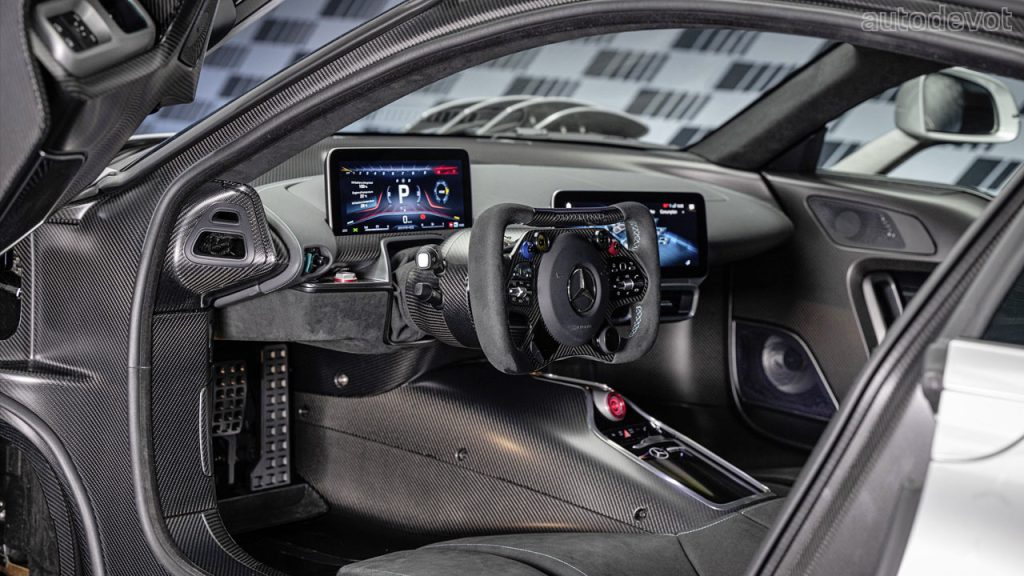 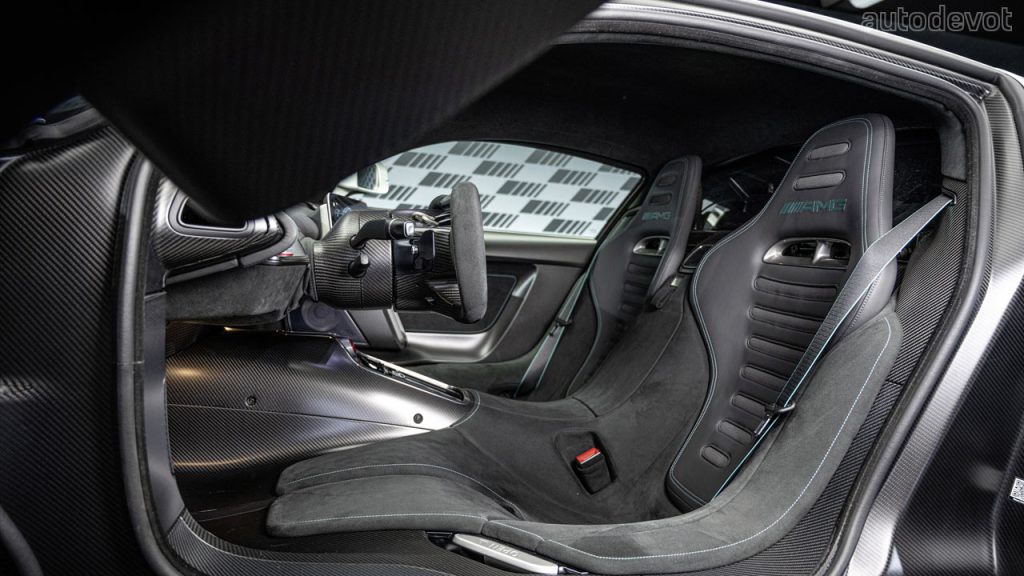 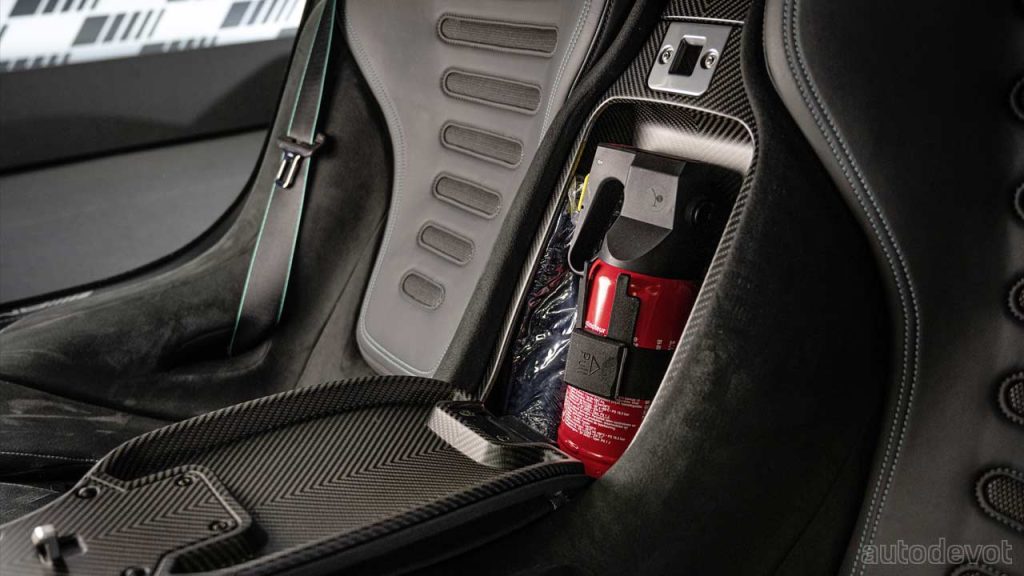 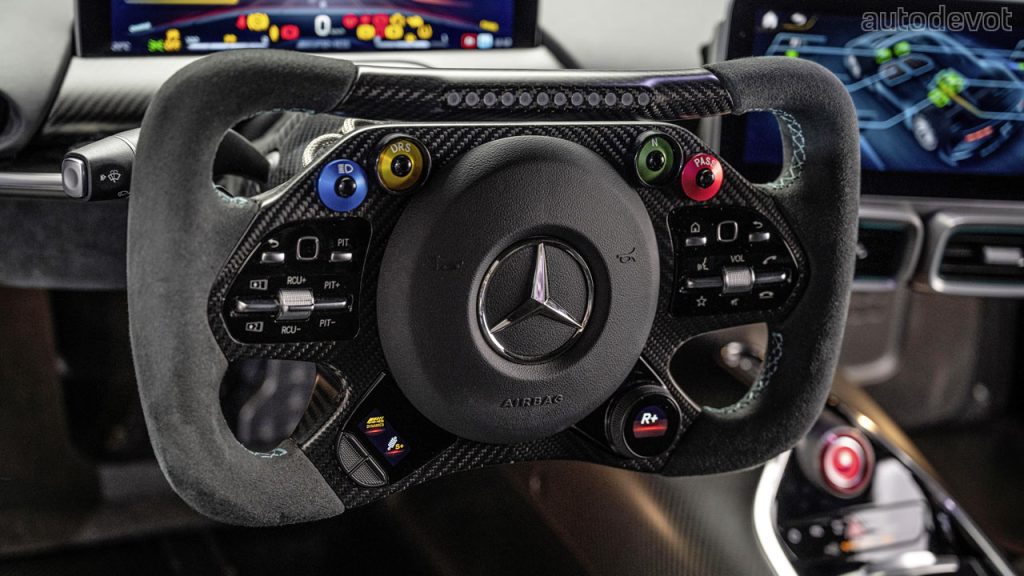 Inside, there are two “firmly fixed” racing seats, but the backrests can be adjusted to two positions: 25- and 30-degree angles. The steering wheel is electrically adjustable and the pedal box is mechanically adjustable in 11 steps. And of course, the passenger footrest is also individually adjustable, so that they won’t bother you while you’re enjoying your track day.

Creature comforts include two 10-inch displays, a MirrorCam that replaces the traditional IRVM, two mini-USB ports for external audio devices, and climate control. Safety systems include a fire extinguisher integrated into the firewall, between the seats. 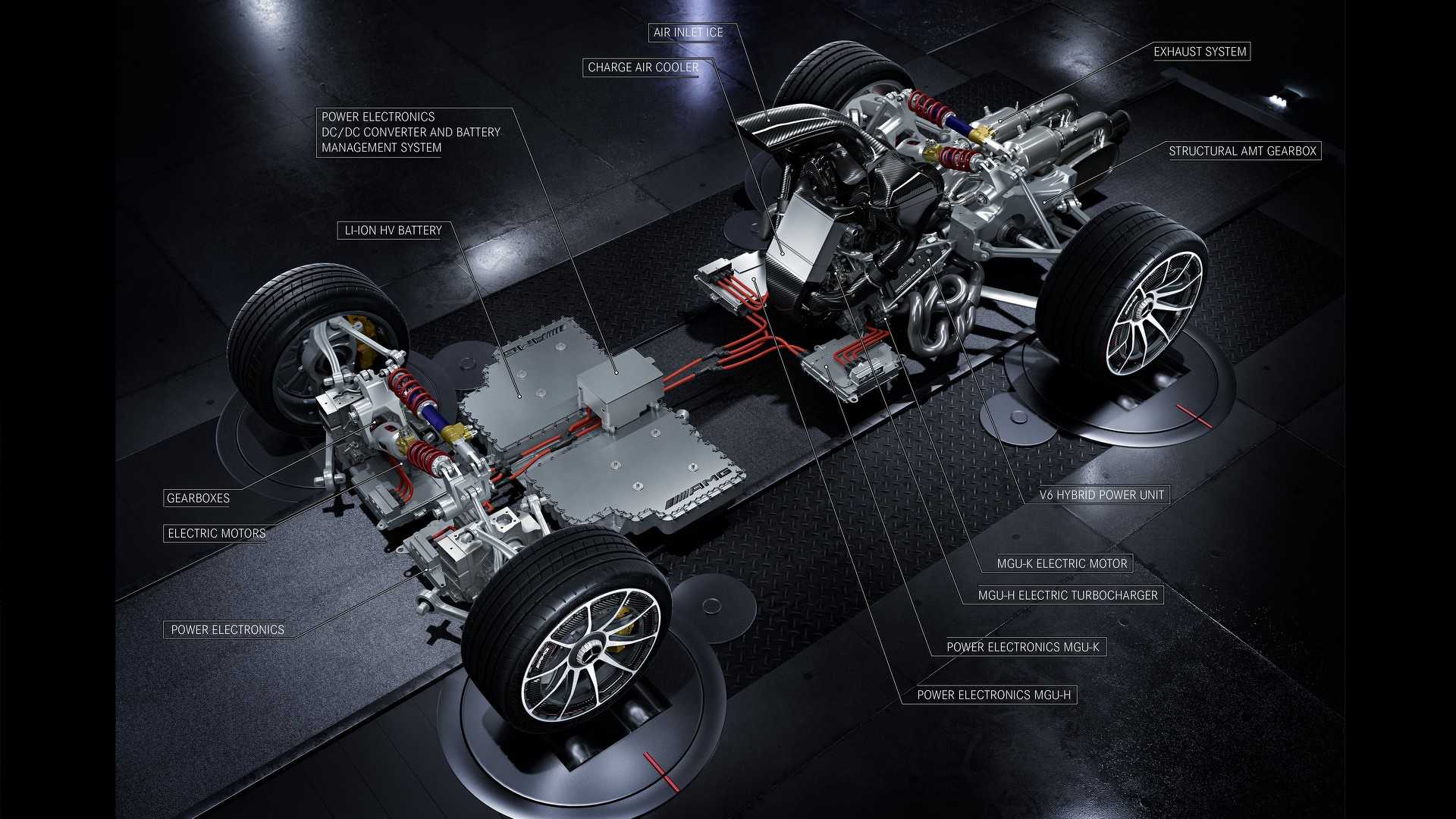 While the MGU-H is to eliminate any turbo lag, the MGU-K is for brake energy regeneration, acceleration assistance and extracting maximum efficiency out of that F1 engine. The combustion engine alone can offer 422 kW (574 metric hp) at 9,000 rpm; it can rev up to 11,000 rpm. But as you know, it was never meant to work alone, and therefore the system output is 782 kW (1,063 metric hp). The combustion engine is coupled with a 7-speed AMT.

An 8.4 kWh battery pack is claimed to offer a pure-electric range of up to 18 km (11 mi), just enough distance to reach the nearest gas station I guess. The hypercar also comes with a 3.7 kW onboard AC charger.