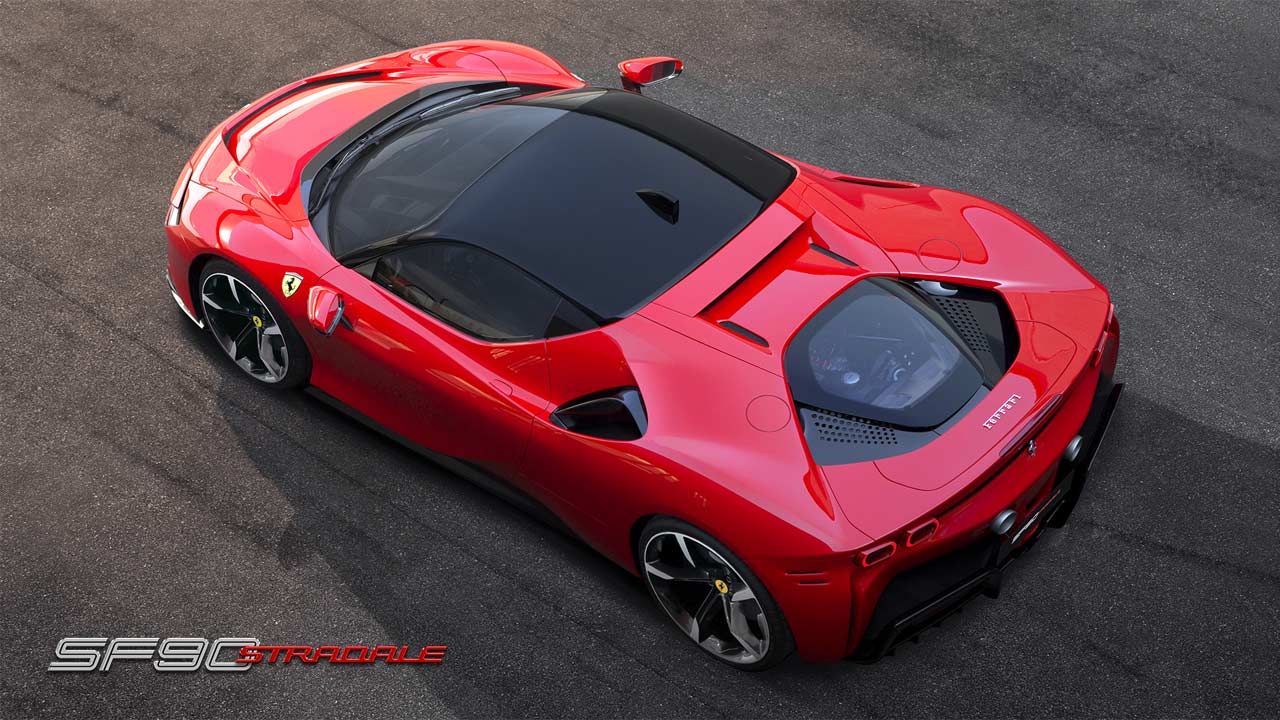 At this point, it seems like Sant’Agata Bolognese is the only place for the purists looking for something naturally aspirated, but it’s just a matter of time I guess, or should we say “inevitability of time“? Either way, the Ferrari SF90 Stradale is here, and it is the brand’s first plug-in hybrid series-production supercar.

In case you haven’t guessed it already, the SF90 refers to the 90th anniversary of Scuderia Ferrari. The car sits on a new hybrid architecture, which according to Ferrari, was a challenge in terms of managing the additional weight. The chassis and bodyshell were built using multi-material technology, including carbon fibre. The dry weight with optional extras is claimed to be 1,570 kg (3,461 lbs), which is an impressive number for a plug-in hybrid. As for weight distribution, it is 45% front – 55% rear. 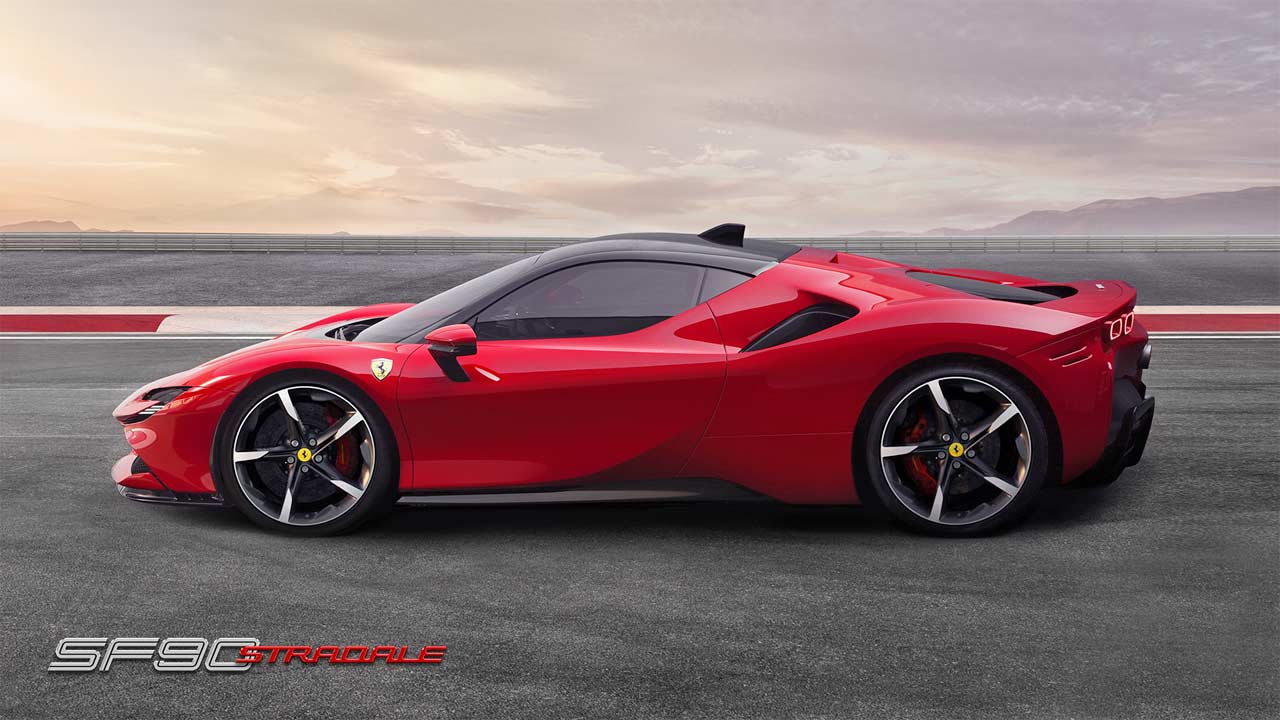 Explaining the materials, Ferrari said that a number of technological innovations have been introduced, including hollow castings which replace the traditional ribbed castings; carbon fibre bulkhead between the cabin and the engine; and two new aluminium alloys, one of which is a high-strength 7000 series alloy for some of the sheet metal. As a result, the SF90 Stradale chassis boasts 20% higher bending stiffness and 40% higher torsional rigidity than previous platforms without any increase in weight.

Buyers can go for a standard or Assetto Fiorano specification; the latter includes special GT racing-derived Multimatic shock absorbers, extra lightweight features made from carbon fibre (door panels, underbody) and titanium (springs, entire exhaust line), resulting in a weight saving of 30 kg (66 lbs). Another difference is the carbon fibre rear spoiler which is claimed to generate 390 kg (860 lbs) of downforce at 250 km/h (155 mph). 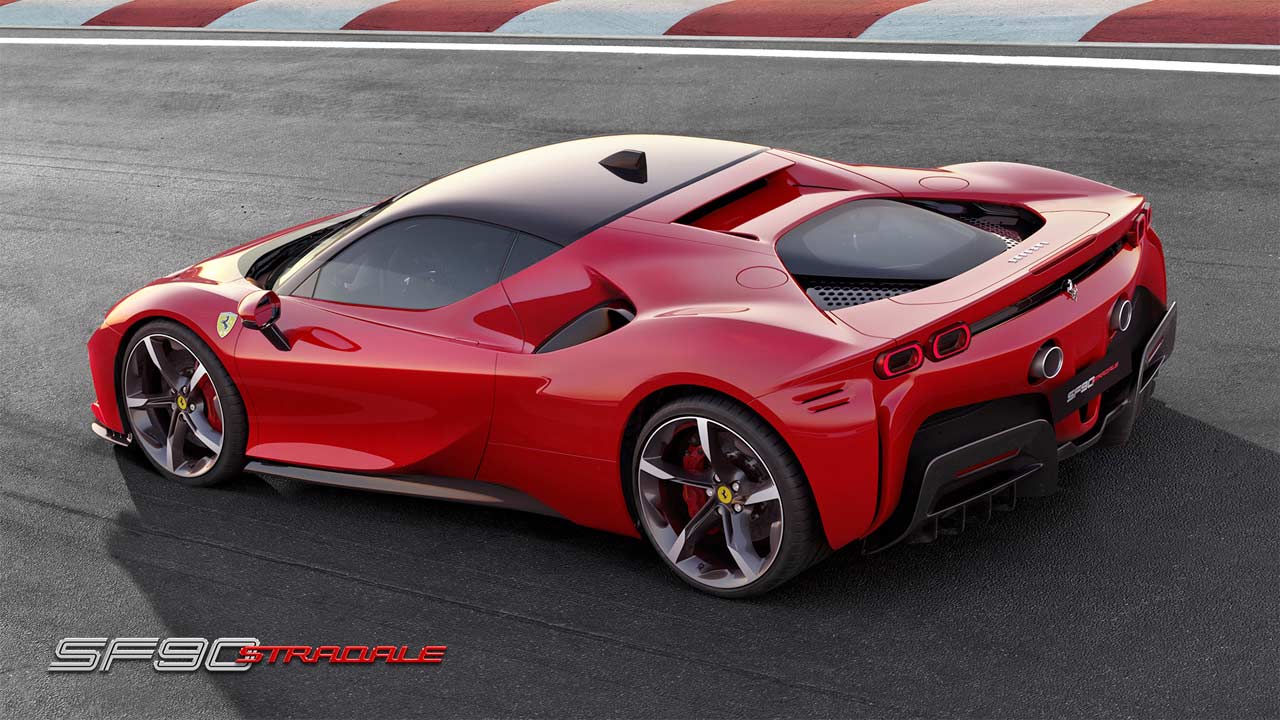 The SF90’s design might remind you of the SP38 Deborah that we saw a year ago. However, the designers have also taken the cues from F8 Tributo and P80/C as well; the latter’s influence can be seen in the flying buttresses-like styling at the rear. Another debut in a Ferrari is the Matrix LED headlamps. Rounding off the exterior looks are aerodynamically optimized 20-inch forged wheels with rotor blade-like spokes. The aforementioned Assetto Fiorano includes Michelin Pilot Sport Cup2 tyres which according to Ferrari, are designed specifically to improve performance on the track in dry conditions. They feature a softer compound and fewer grooves than the tyres provided as standard.

Of course, the exterior part is incomplete without talking about the active aerodynamics. The engineers and aerodynamicists have come up with a shut-off Gurney — a patented system at the rear of the car which regulates airflow over the upper body, reducing drag at high speeds and increasing downforce in corners, under braking and during changes in direction. In high downforce conditions (such as driving through corners, braking or in abrupt changes of direction), the element is lowered by a pair of electric actuators. 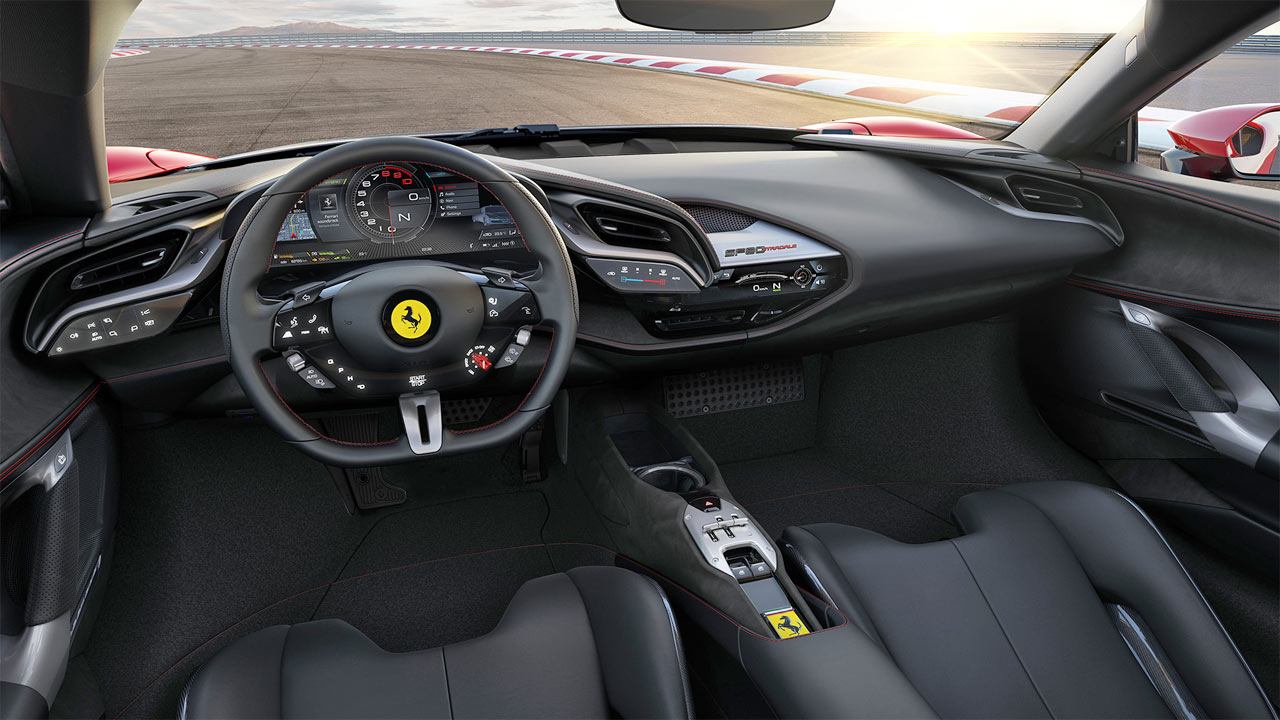 Although the SF90 gets unique touches for the interiors, there is still a Déjà vu effect that takes you all the way back to the 458 Italia. However, there is new technology on-board, including 16-inch curved HD screen, steering wheel with touchpad and a series of haptic buttons. On the centre console, the automatic gearbox controls are designed to mimic Ferrari’s gated shifts of the past.

The SF90 Stradale also sees the debut of a new keyless technology which will gradually be introduced across the rest of the range, personalised with the model’s name. Thanks to a special compartment in the central tunnel, it becomes an integral part of the car’s styling. 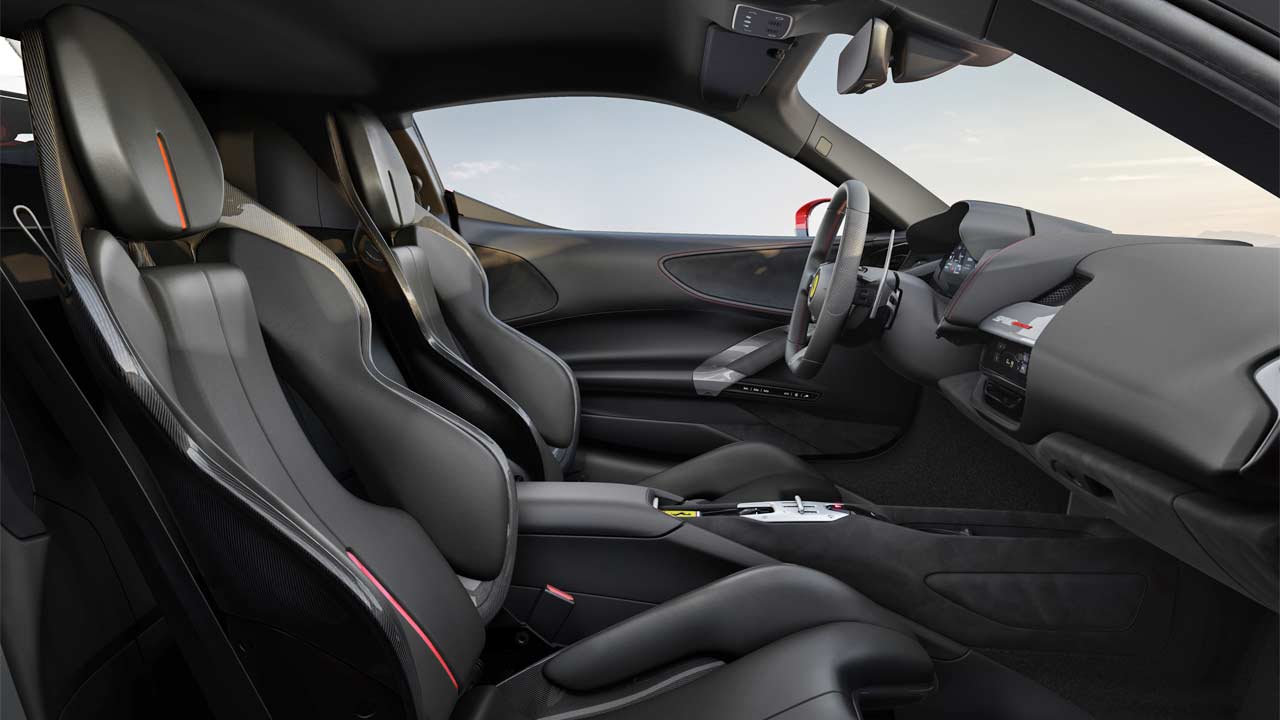 Powertrain
Moving on to the business end of the story, the SF90 Stradale’s internal combustion engine belongs to the F154 family. The capacity is up from 3,902 cc to 3,990 cc, thanks to a larger bore of 88 mm. The intake and exhaust system was redesigned as well and now features a new, narrower cylinder head with a central injector and the adoption of 350-bar GDI, another first for a Ferrari V8. 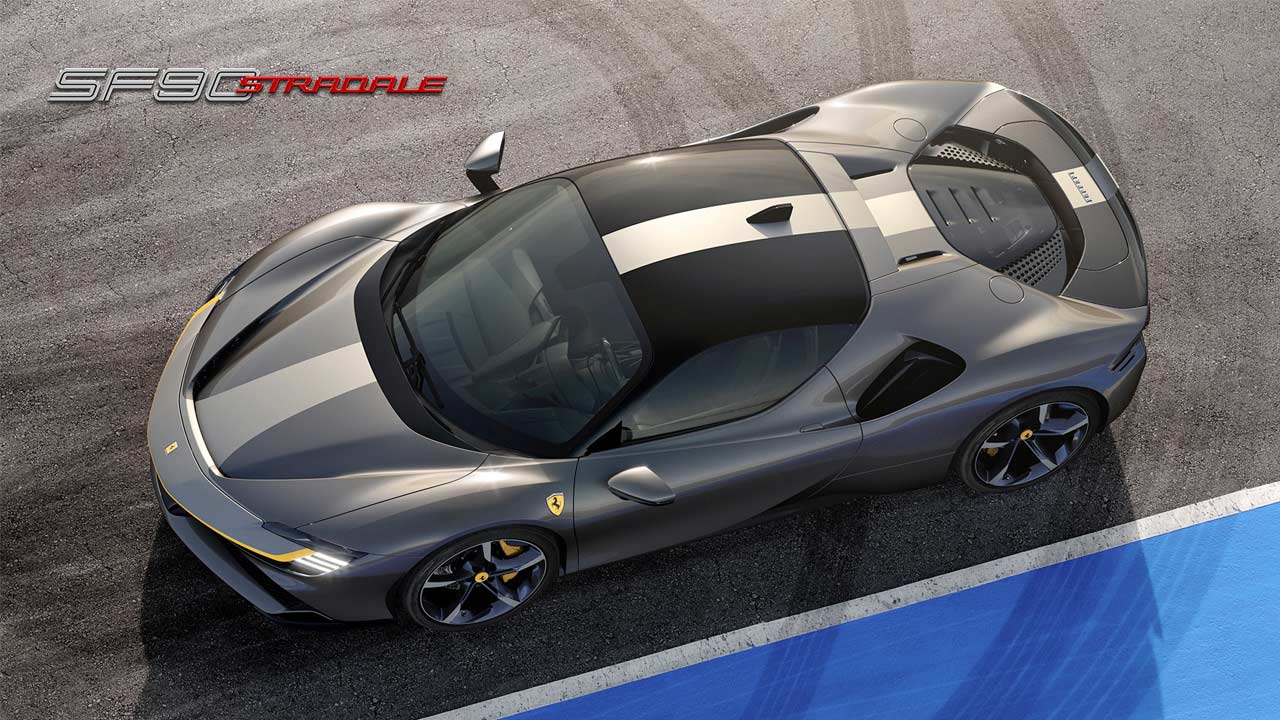 As for the electric motors, the SF90 has three — an MGU-K (Motor Generator Unit, Kinetic) at the rear, located between the engine and the 8-speed dual-clutch transmission on the rear axle, and two on the front axle — a setup similar to the NSX. The two front motors independently control the torque delivered to the two wheels, which is simply known as Torque Vectoring. The RAC-e (electronic cornering set-up regulator) governs the distribution of torque. The motors together offer an additional 162 kW or 220 hp, bringing the total to 1,000 hp. 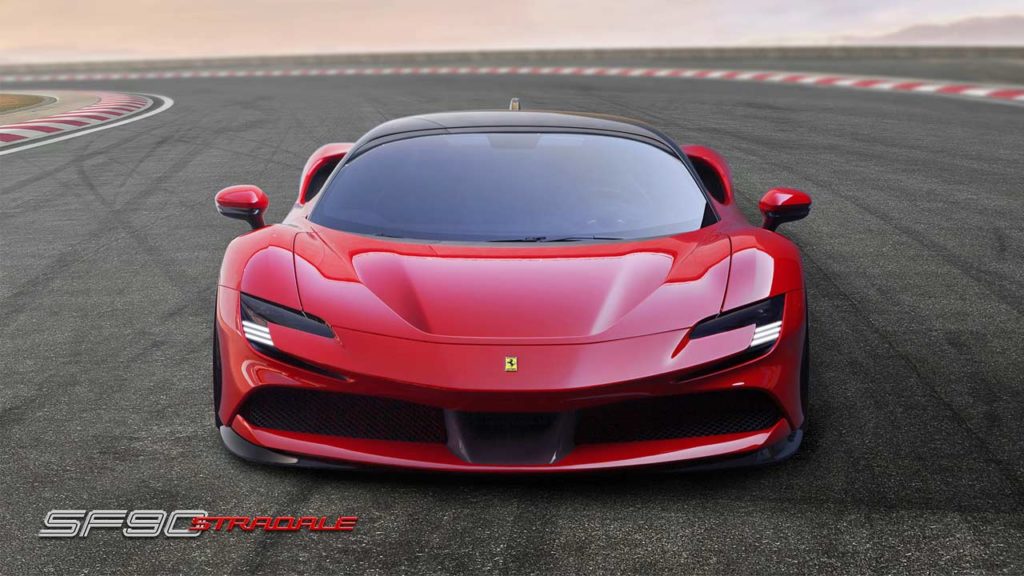 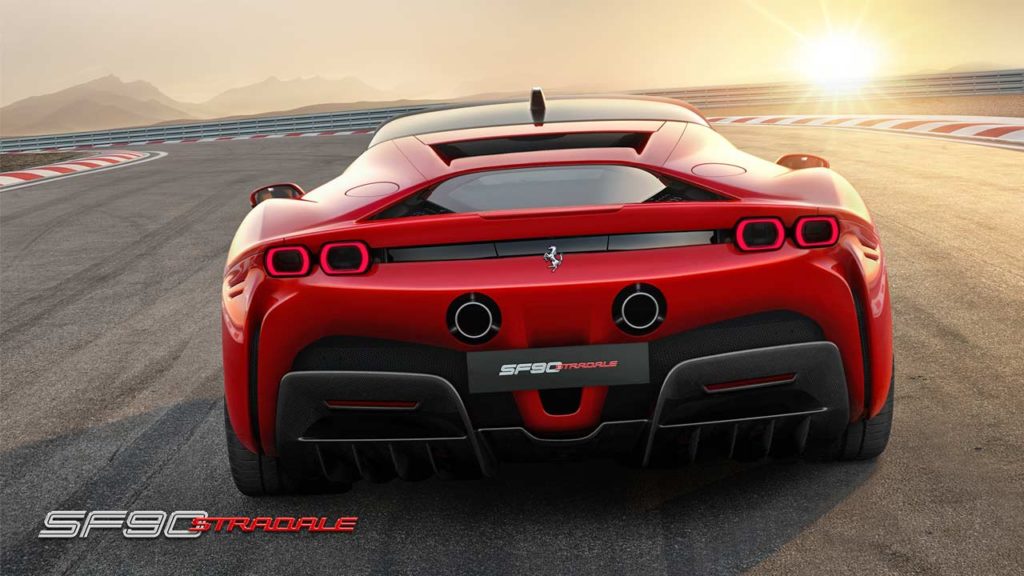 No reverse gear
As for the gearbox, Ferrari says that the new gear ratios and improved transmission efficiency yield a significant reduction in fuel consumption in urban and motorway driving (-8% in the WLTP cycle) without having to compromise on performance. Apparently, there is even a 1% improvement in efficiency on the track. The gearbox’s overall weight is 7% lower; that figure rises to 10% with the elimination of reverse gear. Meaning, the front electric motors perform the task of reversing the vehicle. The new clutch’s performance is 35% higher; can handle up to 1,200 Nm (885 lb-ft) of torque. 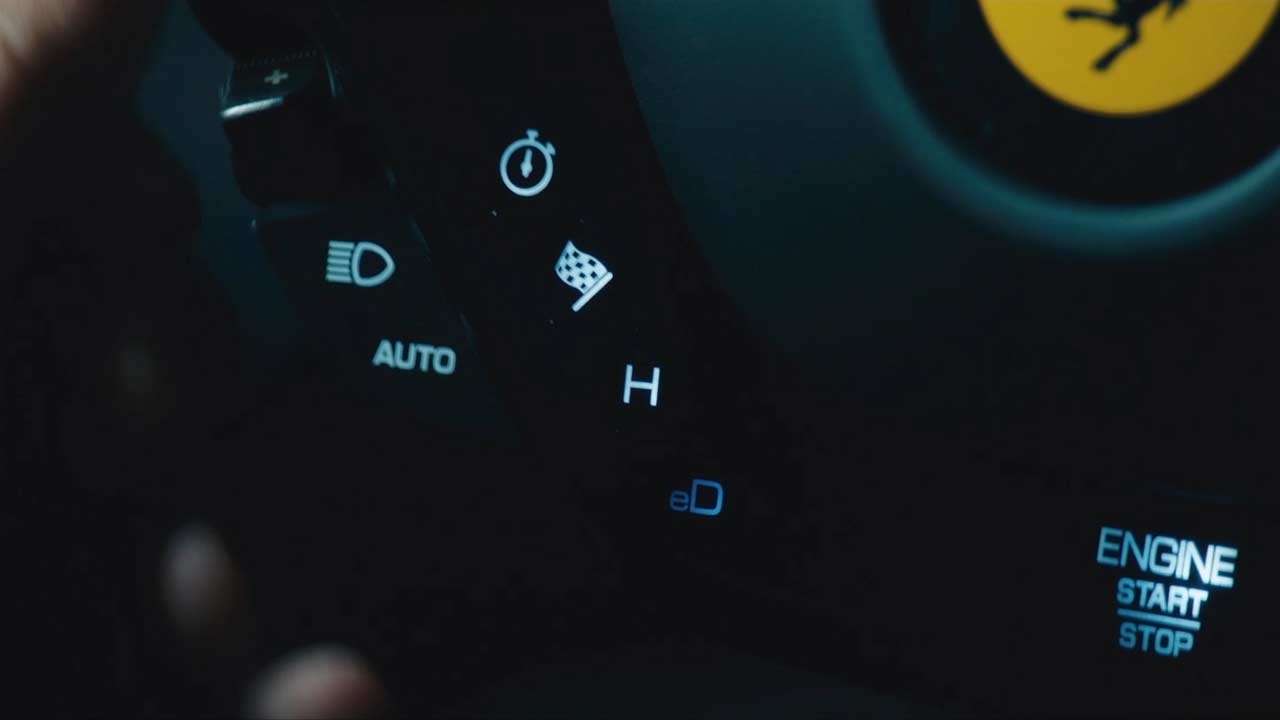 A 7.9 kWh battery pack is good for a pure electric range of 25 km (16 mi). The driver has 4 additional modes to choose from — eDrive, Hybrid, Performance, and Qualify. The Performance mode is when driving pleasure and fun is the main focus, while the Qualify mode extracts maximum power output from the electric motors and the control logic prioritises performance over battery charging.

Other electronic aids include eSSC (electronic Side Slip Control) vehicle control system and Electric Traction Control (eTC). As mentioned before, the Torque Vectoring is available on the front axle.