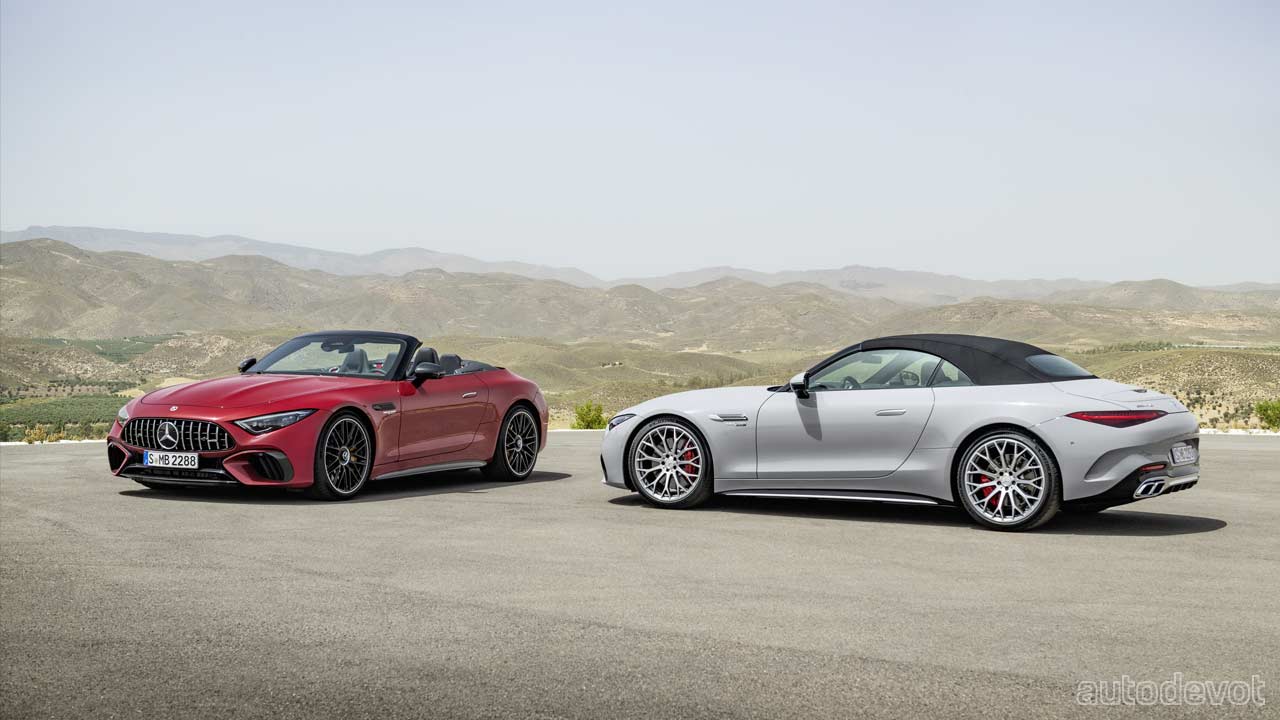 A hybrid version will join the lineup at a later date

The 7th gen, R232 Mercedes SL foreplay is finally done and we now have the full information to go over. Pricing is yet to be announced, but the new SL has already been listed on Mercedes’ official website of several European markets. Highlights include new composite aluminium architecture, 2+2 seating, AWD for the first time, active anti-roll stabilization, rear-axle steering, soft-top roof, and two variants. 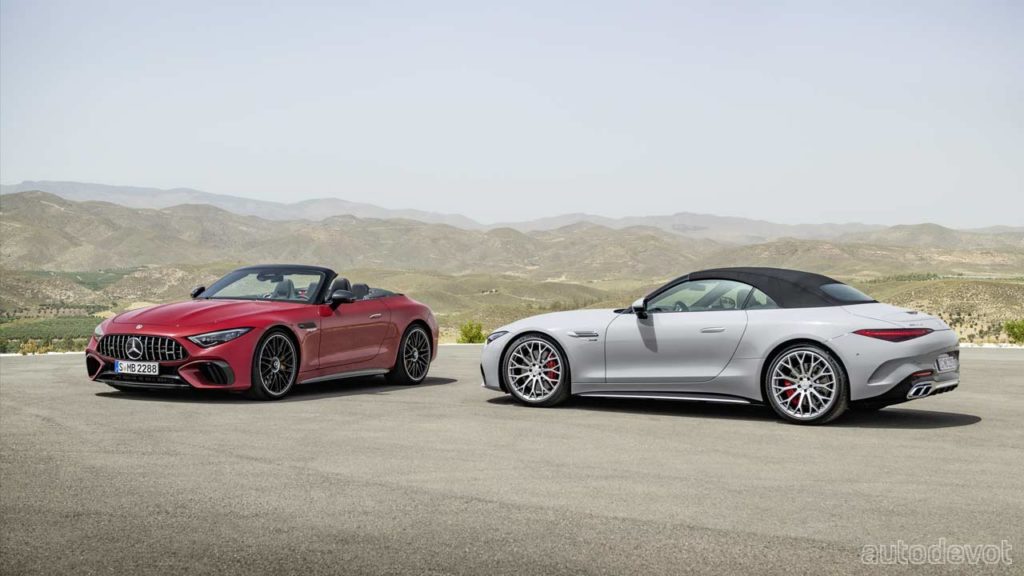 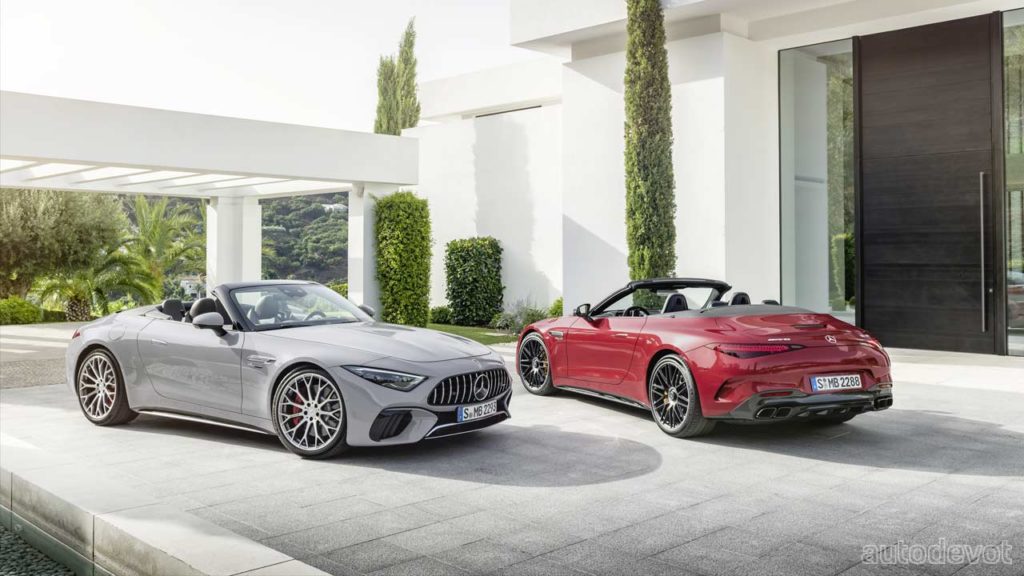 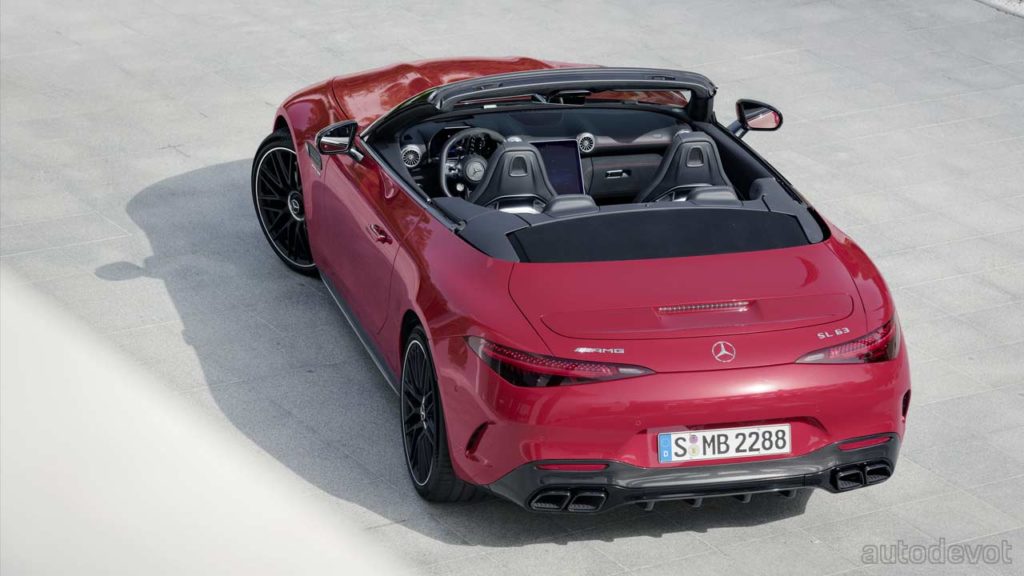 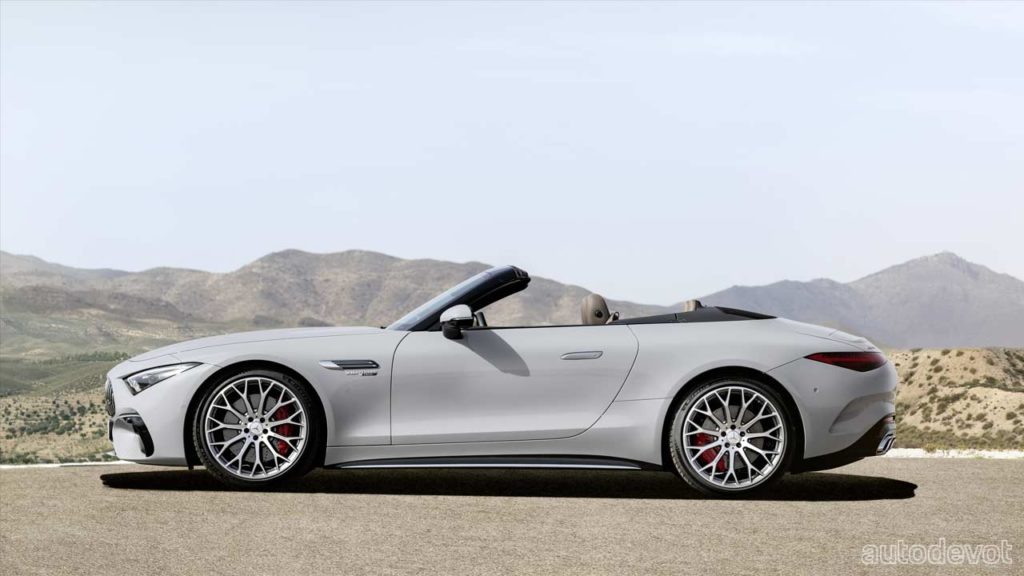 The camouflaged prototypes already gave us a pretty good idea of how the new SL would look, and now that the camouflage is off, I think most of us would agree that it indeed looks stunning, so much so that the new SL might end up hurting the sales of AMG GT and GT Roadster pretty bad, which is probably not a bad thing. The red one is the SL 63 and the somewhat gray-ish one is the SL 55. The Z-fold electric soft-top saves about 21 kg (46.3 lbs) compared with the previous metal vario-roof. It is available in black, grey or red. The roof operation takes about 15 seconds and can be operated at speeds of up to 60 km/h (37 mph). When the roof is down, the new SL is claimed to enable 213-litres of boot space and expands to 240-litres when the roof goes up. 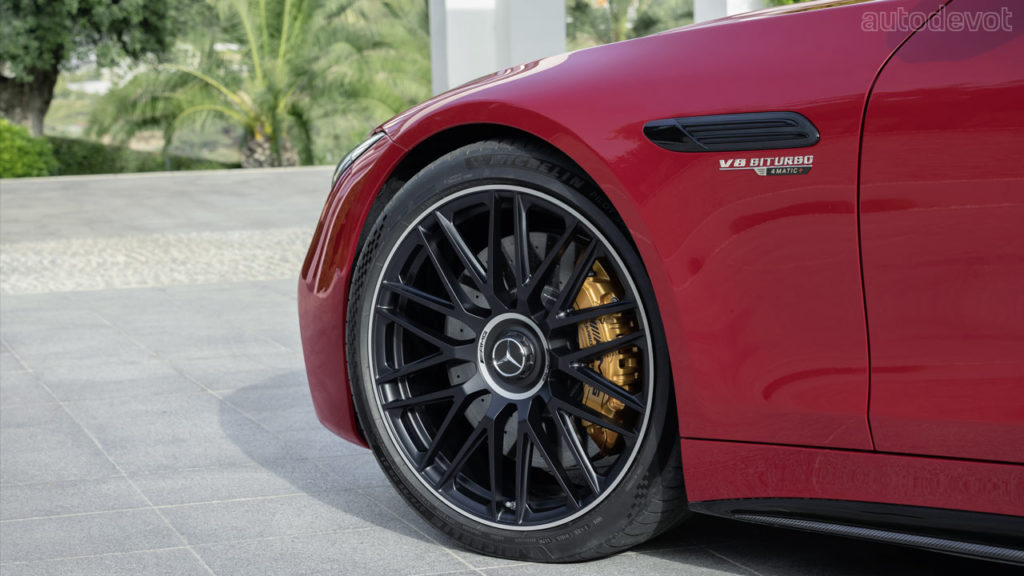 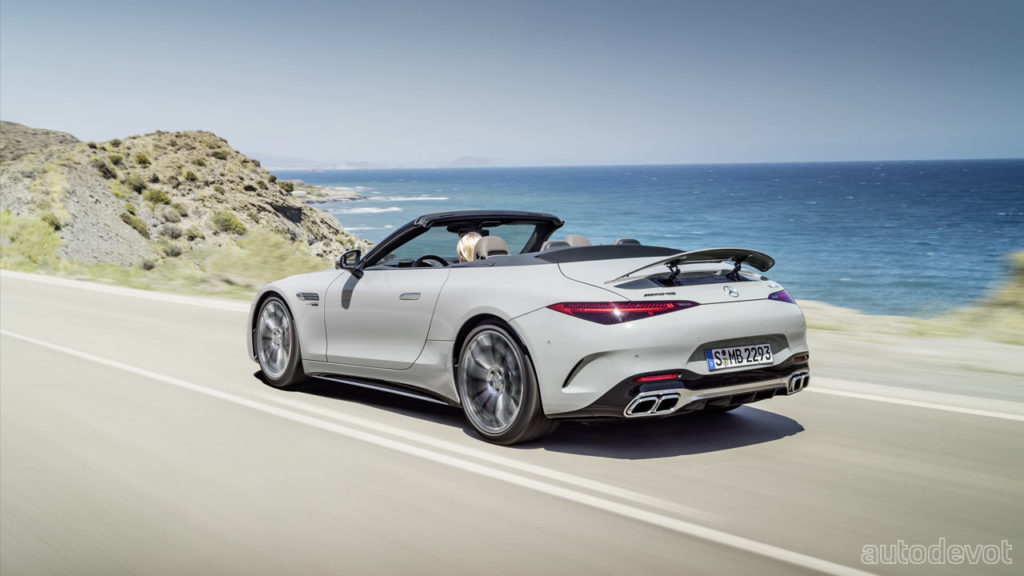 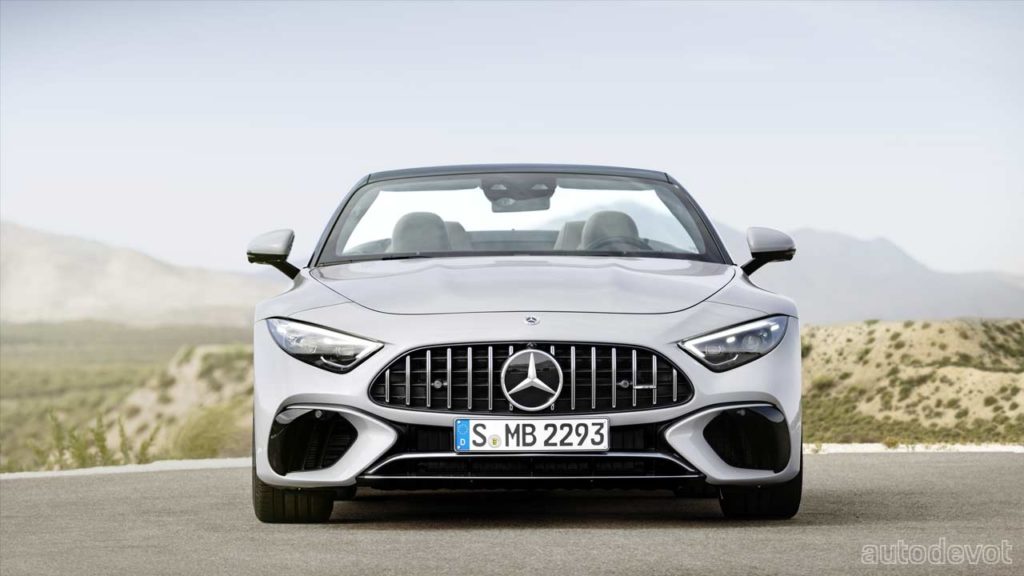 Other exterior features include the Digital Light LED headlights, AMG-specific radiator grille with 14 vertical slats, and slim LED taillights. The SL 55 rides on 19-inch alloy wheels as standard, while the more powerful SL 63 flaunts 20-inch ones. However, up to 21-inch designs are available in the options list. There’s also a 20-inch option with plastic aero rings.

Active aero bits include a two-piece active air control system called ‘Airpanel’. The first piece with vertical louvres is hidden behind the lower air intake in the front apron. The second piece is behind the upper air intake and has horizontal louvres. All louvres are electronically controlled and can be opened and closed with actuators to direct the airflow as needed, improving aerodynamic performance. The second piece opens past 180 km/h (112 mph). There’s also an active rear spoiler that assumes five different angular positions (from -11-degree to +22-degree angle) from 80 km/h (50 mph) to either optimize handling stability or reduce drag. Speaking of drag, the coefficient figure is claimed to be 0.31 Cd. For those who seek more downforce and even sharper looks, there’s of course, the optional Aerodynamics Package. 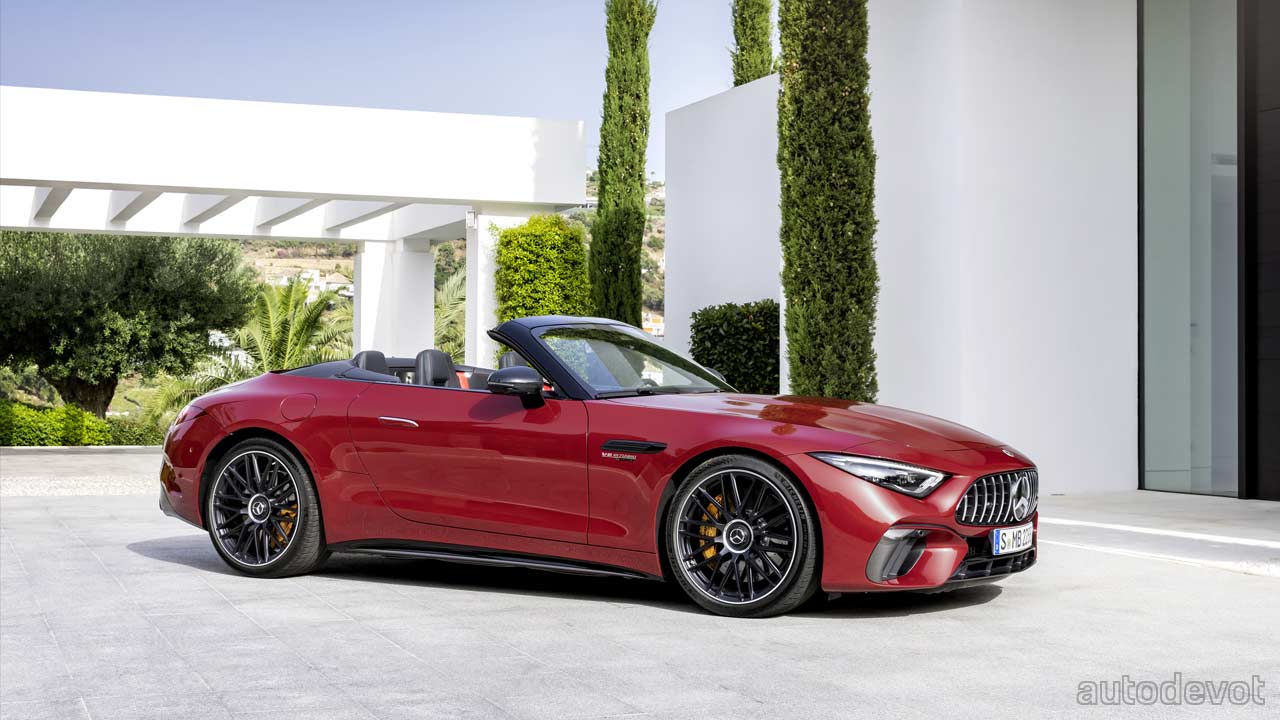 But anyway, moving on, the new SL is built on a new lightweight composite aluminium architecture that we read about a few months ago. Torsional stiffness and rigidity are up compared with the previous model, and the weight of the plain body shell without doors, bonnet and boot lid is claimed to be only around 270 kg (595 lbs). Read more in detail here.

Suspension is a 5-link setup at both the front and rear axles. The SL 55 gets the latest generation of AMG adjustable damping as standard, while the SL 63 boasts the AMG Active Ride Control suspension where active hydraulic elements replace the conventional mechanical anti-roll torsion bars.

The SL 63 also gets an electronically controlled limited-slip rear differential as standard, while the SL 55 buyers have to opt for the AMG Dynamic Plus package to get that. Braking duties on both SL models are handled by composite discs measuring 390 x 36 mm with 6-piston fixed calipers at the front, and 360 x 26 mm with 1-piston floating calipers at the rear. AMG ceramic composite discs are available in the options list, measuring 402 x 39 mm on the front axle and 360 x 32 mm on the rear axle. 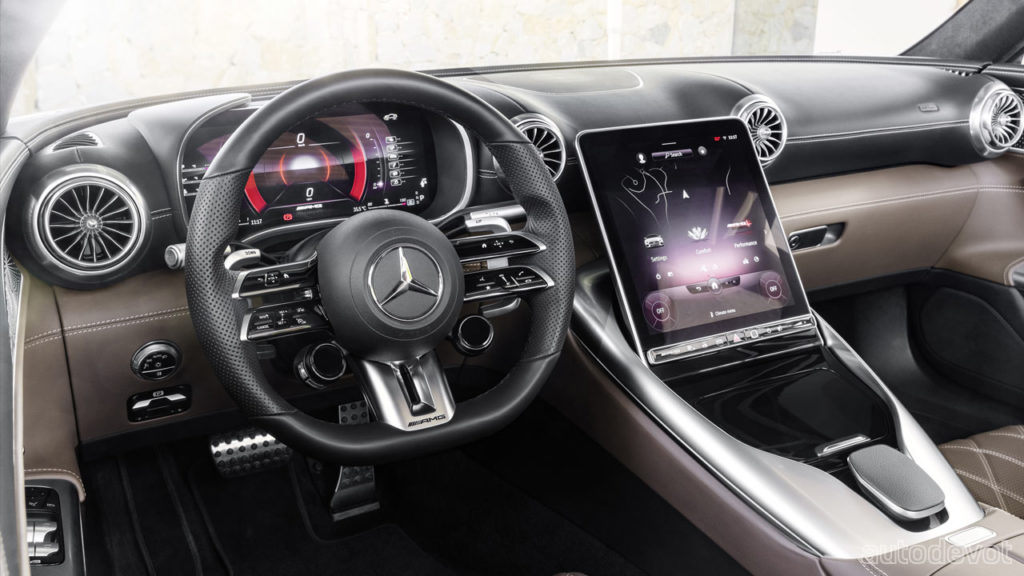 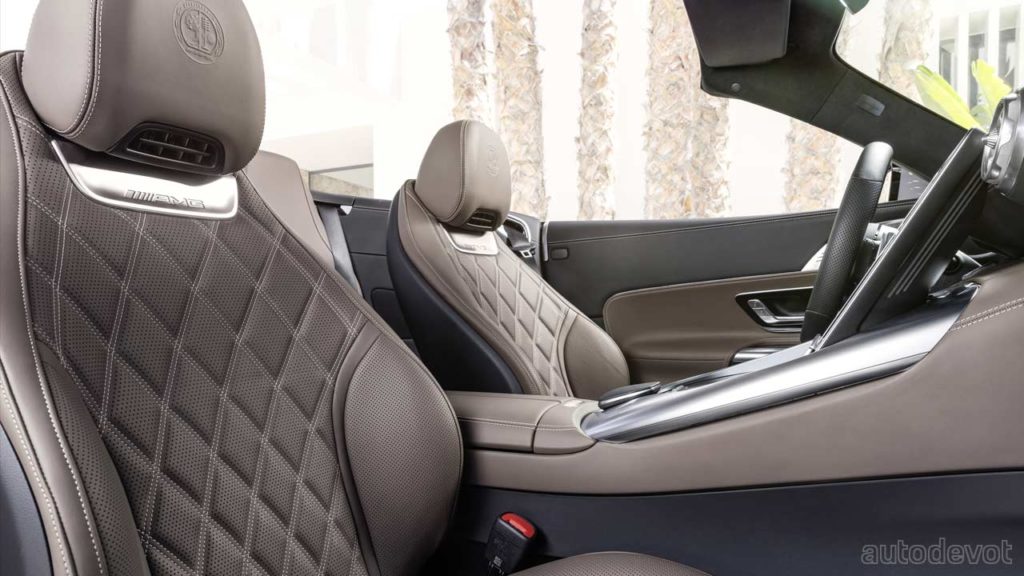 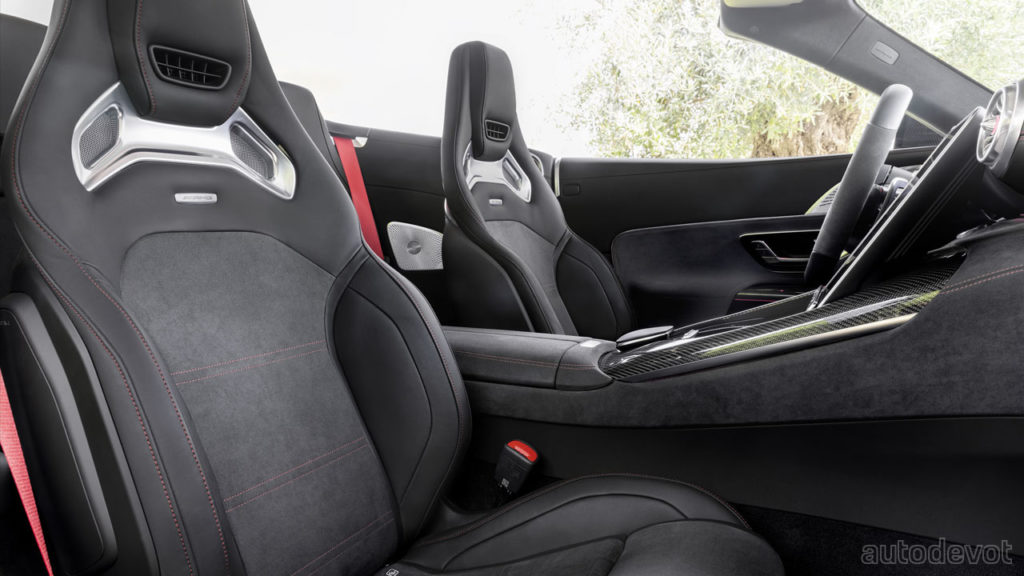 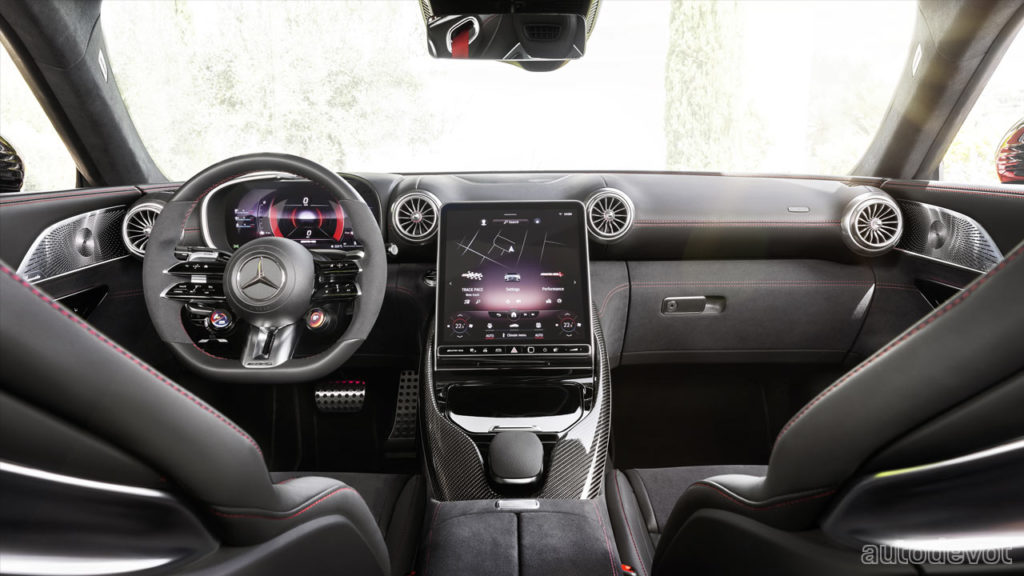 Its 2+2 cockpit was fully revealed a few months ago, and like most roadsters out there, the +2 seats are really for small kids or luggage. Tech inside includes a 12.3-inch LCD instrument cluster, a 11.9-inch portrait-style angle-adjustable central touchscreen, and an optional head-up display. Airscarf comes standard, which blows warm air into the head and neck area of the passengers. AMG performance seats are optionally available for those who don’t fancy the standard seats. AMG Track Pace—a data logger—is on board as standard for the SL 63 and optionally available for the SL 55. It records more than 80 vehicle-specific data (including speed, acceleration, steering angle, brake pedal actuation). 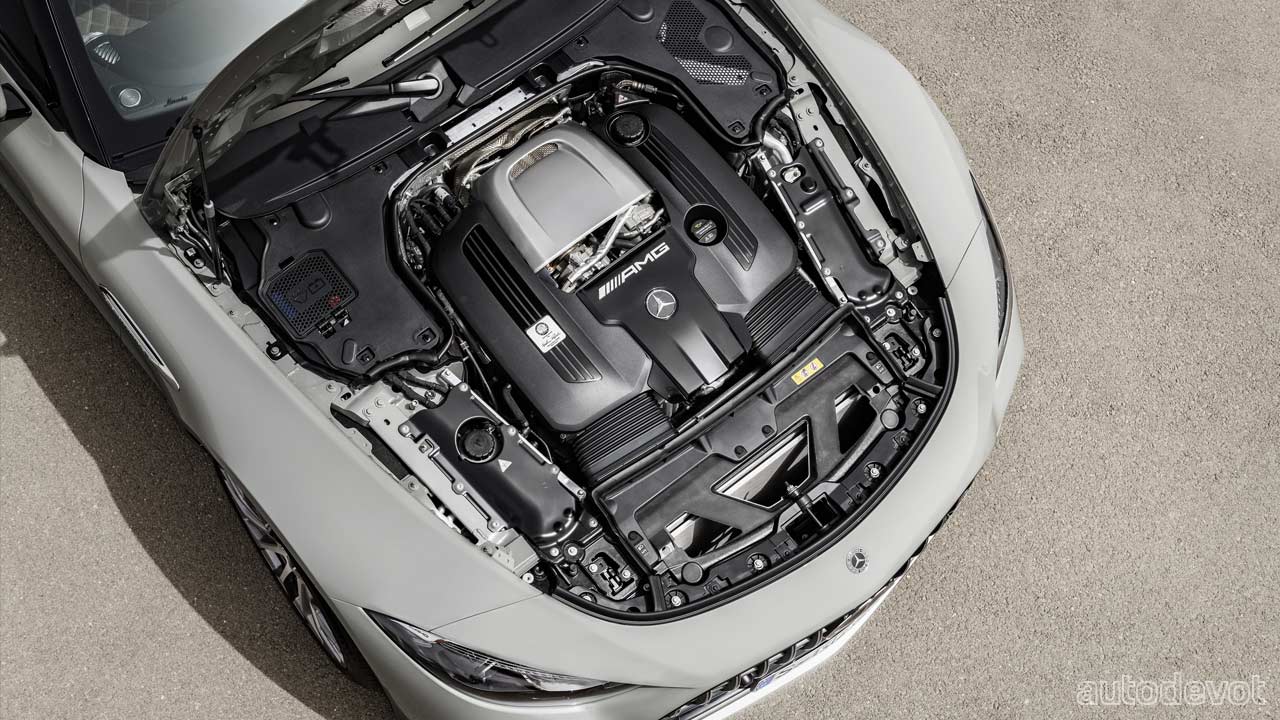