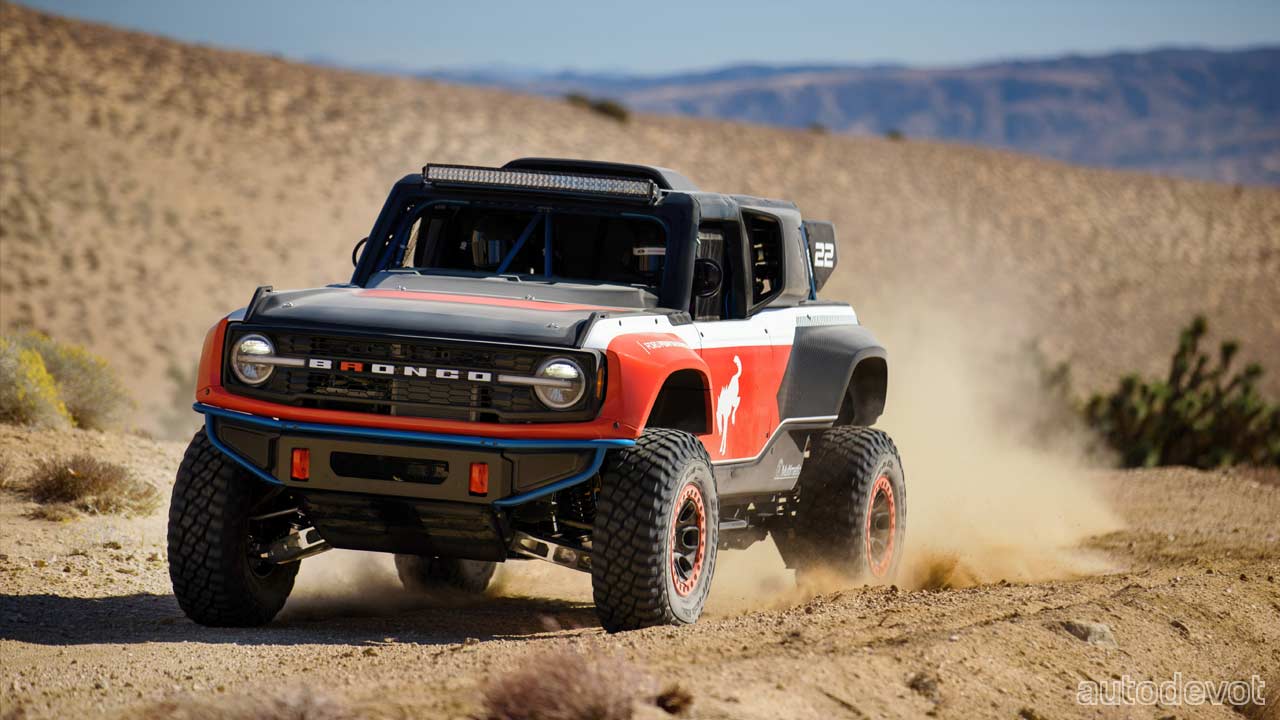 Months before the debut of the 6th gen Bronco, Ford revealed a Baja version (Bronco R race prototype) that gave us a rough idea of what to expect for the series-production consumer version Bronco. Now that the people know what the regular Bronco is capable of, it’s time to take a brief look at the production iteration of the Baja version. It’s called the Bronco DR, where the DR stands for Desert Racer. 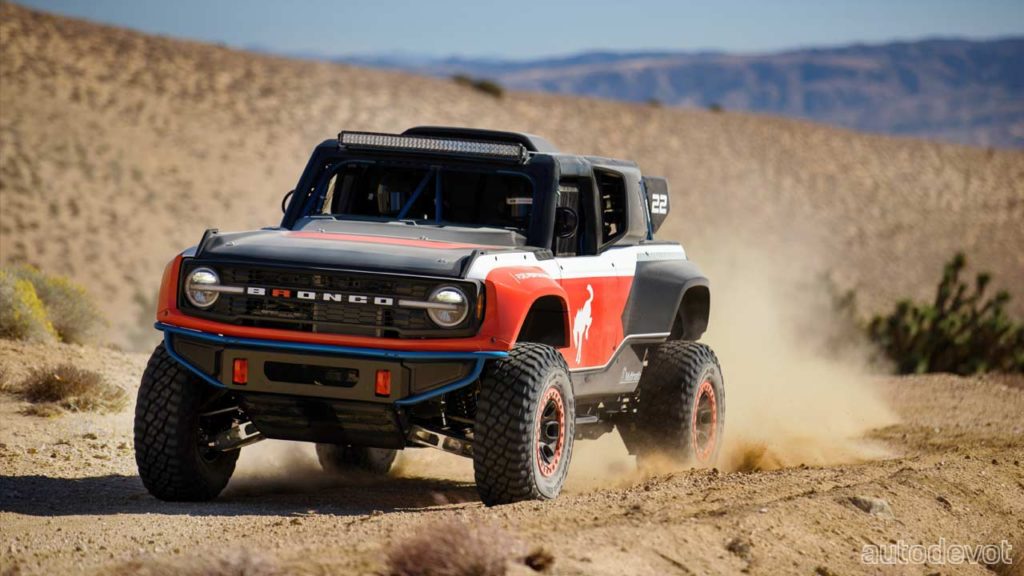 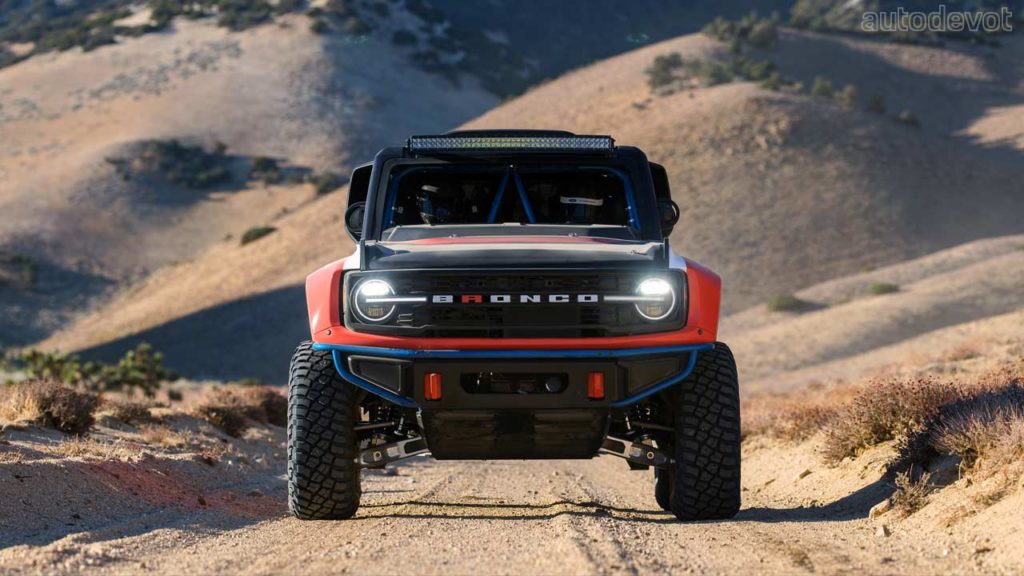 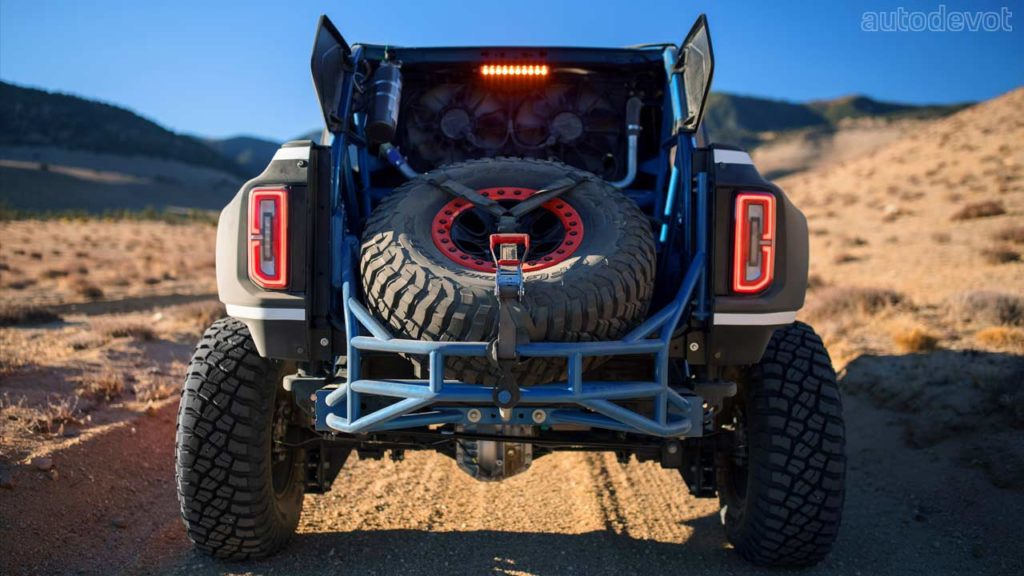 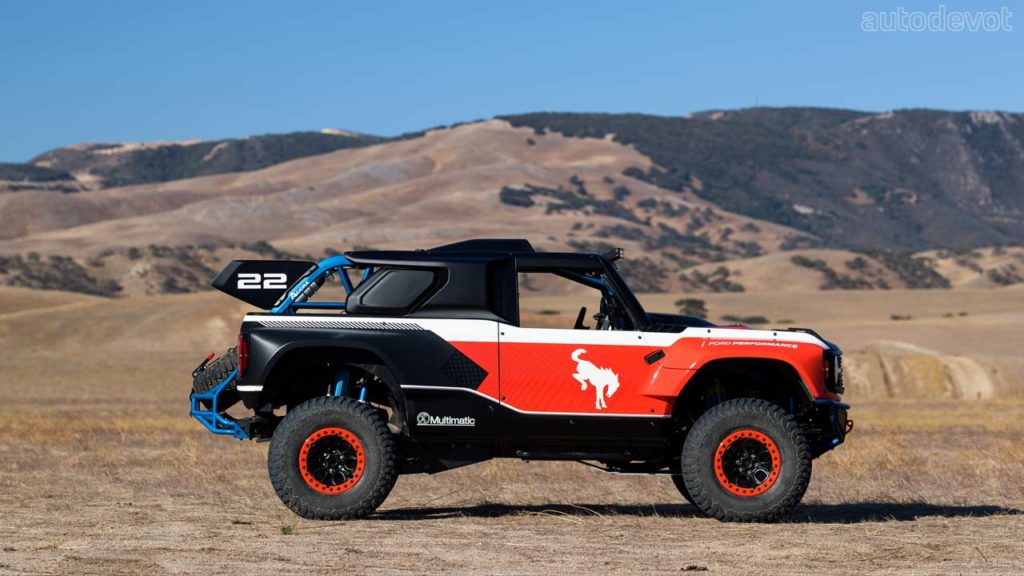 Ford is planning to build only 50 units initially, which will be available in late 2022, and the prices might start at somewhere around $200,000. Highlights of the Bronco DR include Multimatic suspension, Multimatic safety cage and Coyote 5.0-litre V8 engine. The racer wears a racy livery with red, white, black and blue colors, paying homage to Rod Hall’s 1969 Baja 1000 victory. 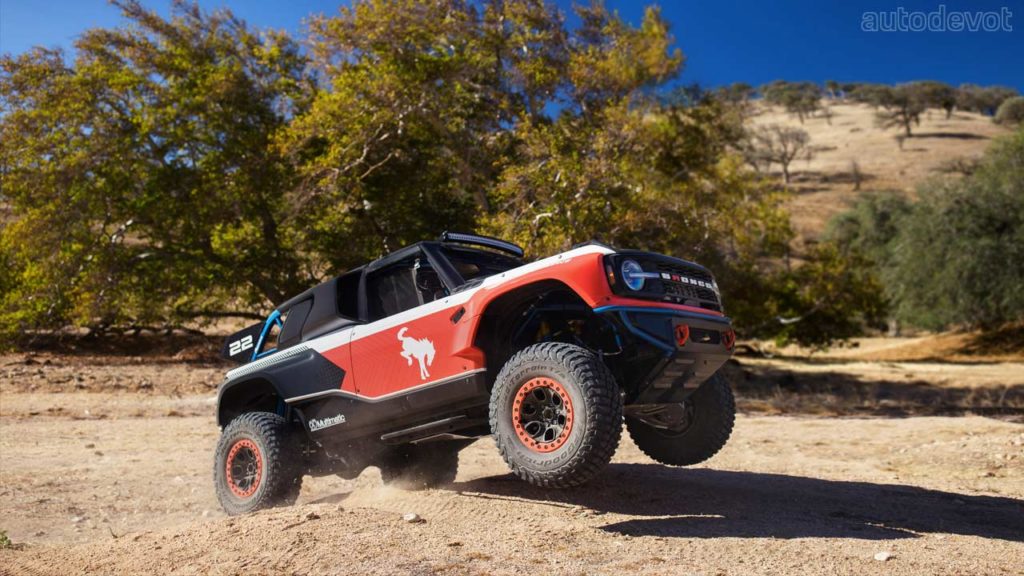 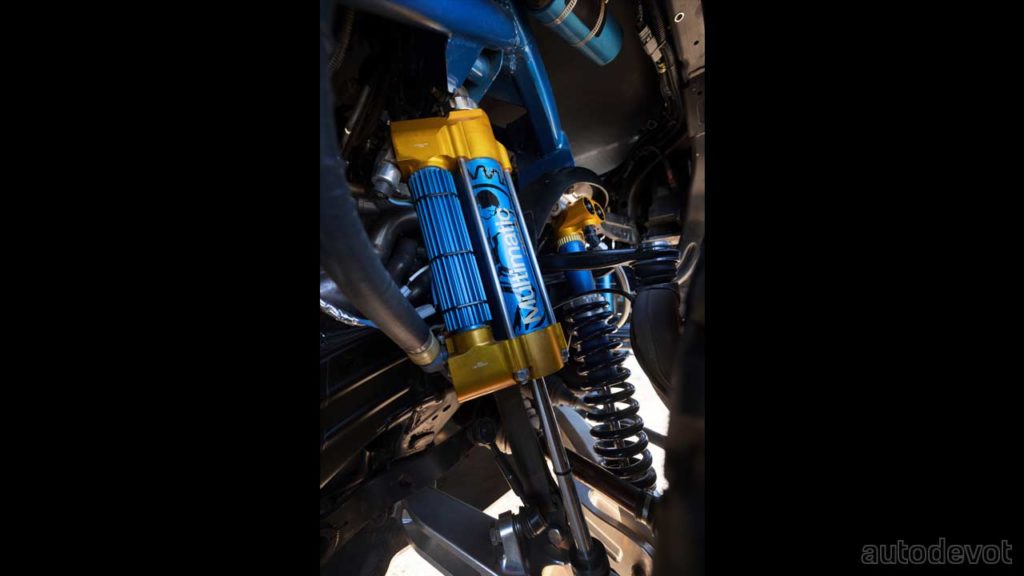 The Multimatic Positional Selective DSSV dampers offer a suspension travel of 400 mm (15.8-inch) at the front and 443 mm (17.4-inch) at the rear. Other off-roading credentials include approach, breakover and departure angles of 47 degrees, 33 degrees and 37 degrees, respectively. A 73.7-inch front track and 73.3-inch rear track offer a firm footing. The Bronco DR rides on 17-inch beadlock wheels wrapped with 37-inch BFGoodrich Mud-Terrain tires. 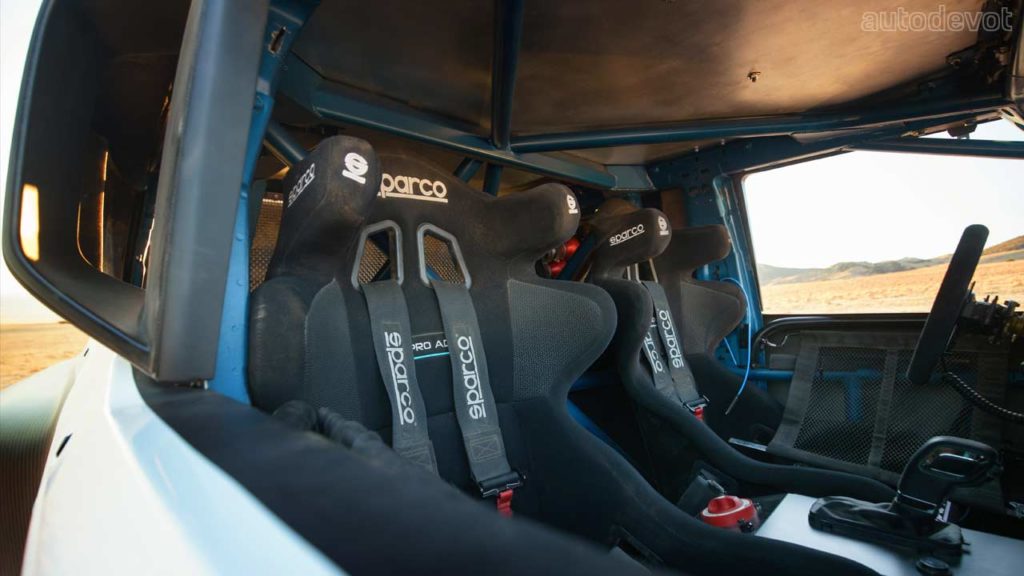 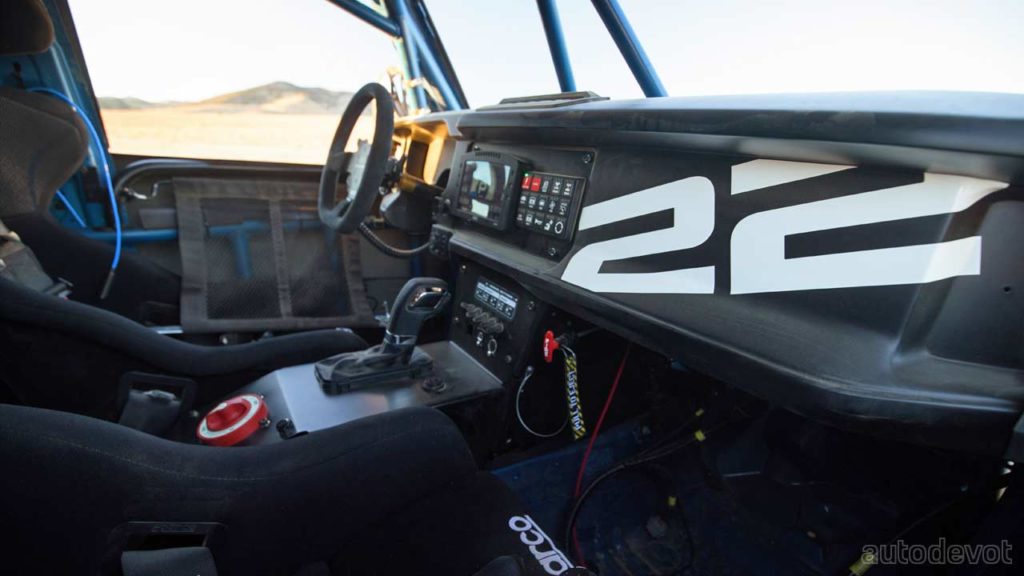 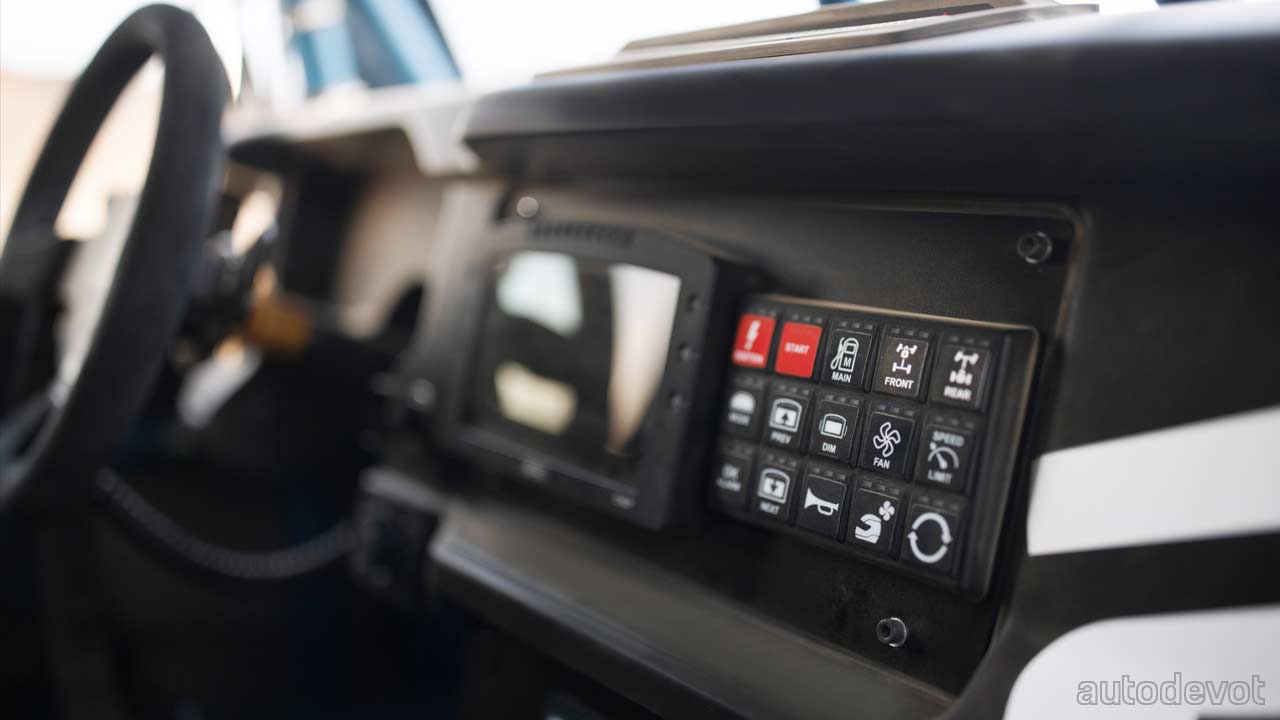 The Multimatic full safety cage encases a pair of Sparco race seats and a Motec C187 display. The Coyote 5.0-litre naturally aspirated V8 petrol engine is estimated to offer more than 400 bhp, but the final output figures are yet to be disclosed. Transmission will be a 10-speed automatic. Torque is transmitted via electronically locking front and rear differentials with 4.70:1 final drive ratios.

A 65-gallon (246-litre) fuel tank rides below the cargo area. The Bronco DR carries over the disc brakes from the production Bronco and adds upgraded pads, while the electric power-assisted steering system with upgraded inner tie rod joints makes for increased articulation, Ford said. Also, Ford is targeting a race weight of about 6,200 lbs (2,812 kg).