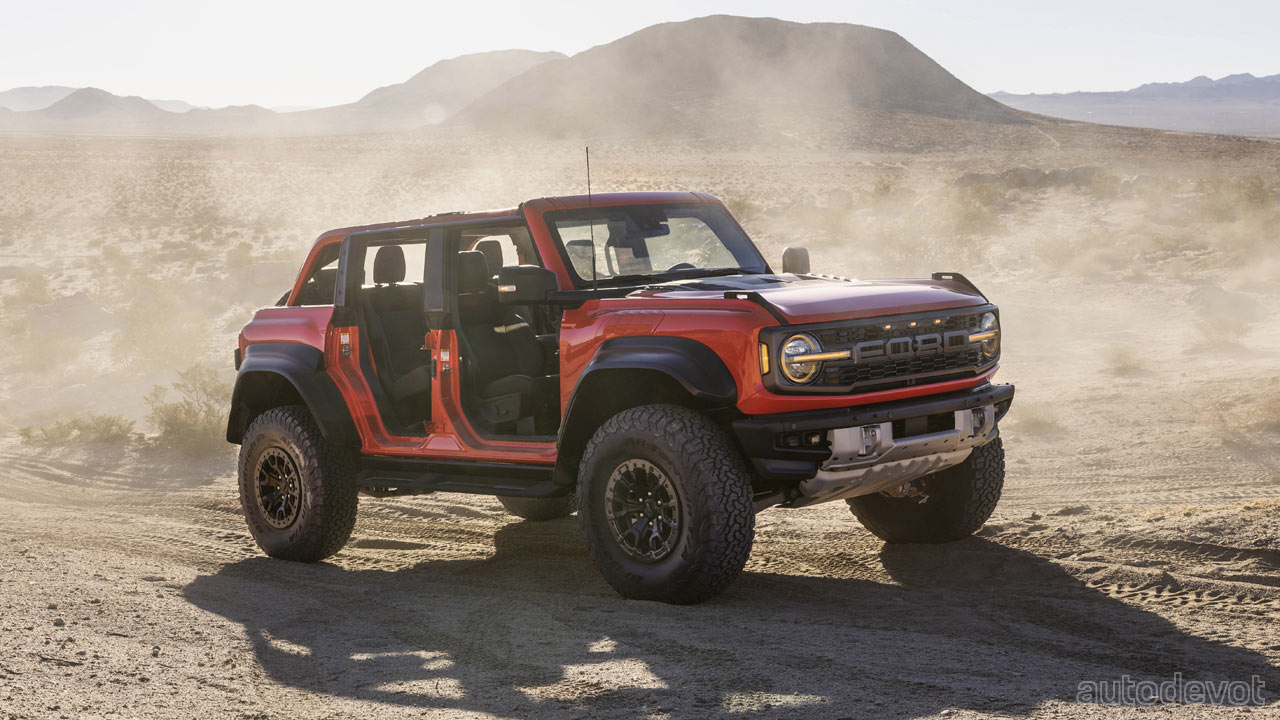 The 6th gen Ford Bronco is a superbly capable off-roading tool, but sadly, a lot of owners don’t get a chance or don’t bother to explore the full potential of their vehicle. That said, there are also a lot of owners who do take their Broncos off-roading, and so, at least for them, Ford is combining the Bronco brand with the Raptor brand to create what is billed as the most powerful street-legal Bronco ever. The Bronco Raptor is engineered by the same team that builds the F-150 Raptor. Prices start at $69,995 (including a $1,495 destination fee) when it goes on sale later this year. 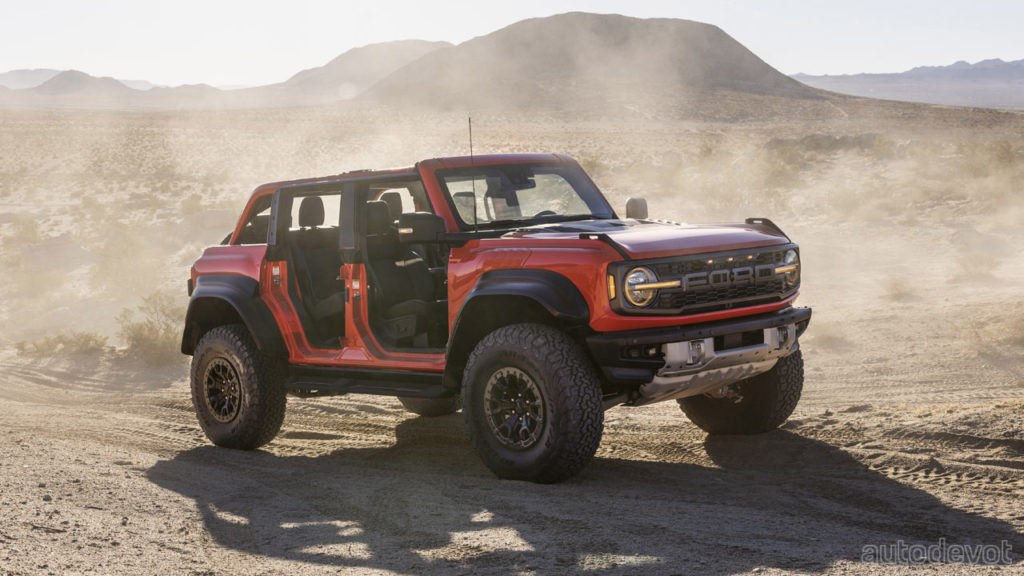 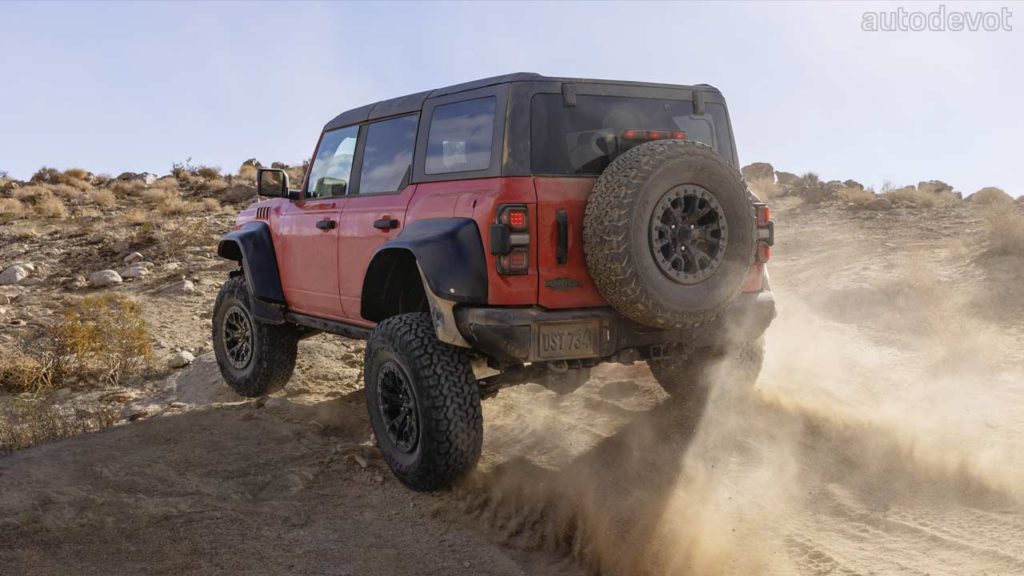 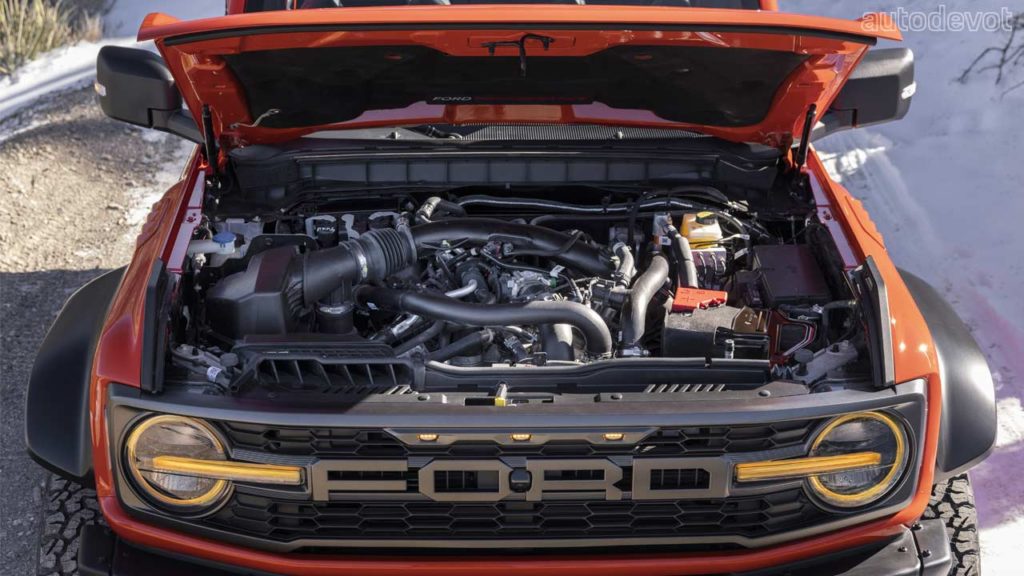 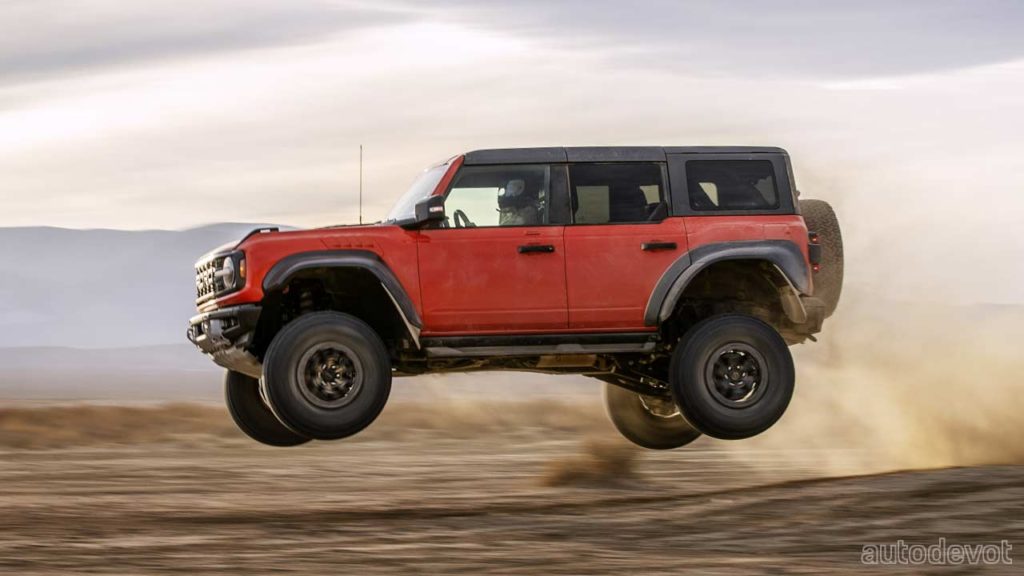 Alright then, let’s get the numbers out of the way, shall we? Well, the Bronco Raptor packs a 3.0-litre EcoBoost V6 petrol engine—paired with a 10-speed automatic transmission; the same combo found in the Explorer. Ford is not sharing the final output figures yet but says there’s gonna be more than 400 hp on offer, which is something expected out of that combo. The two-speed transfer case has been upgraded and features a 3.06 4×4 LO ratio for up to 67.7:1 crawl ratio. 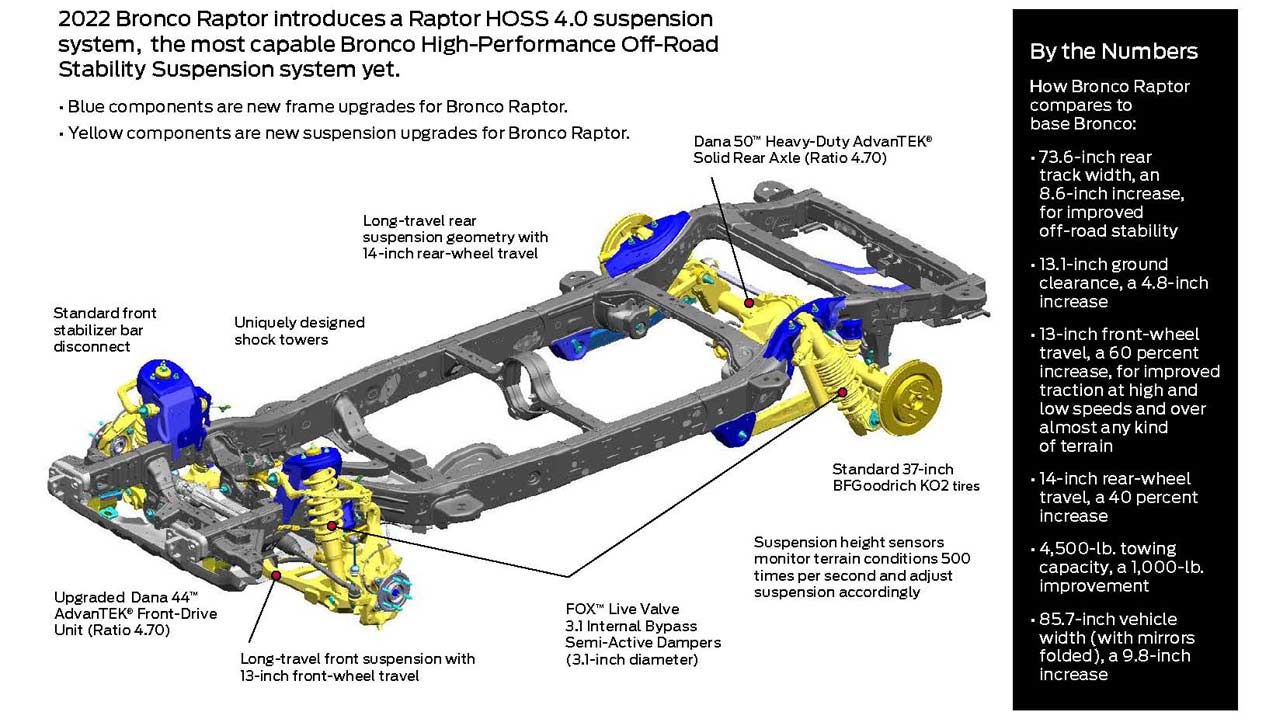 But as you might know, the Bronco Raptor is a lot more than just the front grille and engine swap. The solid rear axle is upgraded to a semi-float Dana 50 Heavy-Duty AdvanTEK with 235 mm ring gear, while the Dana 44 AdvanTEK front unit includes upgraded half-shafts with 210 mm ring gear. These upgraded front and rear axles increase the track width by 8.6-inches (73.6-inches versus 65.0-inches) over a base Bronco. Also, the minimum ground clearance is 13.1-inches—4.8-inches more than a base four-door model. 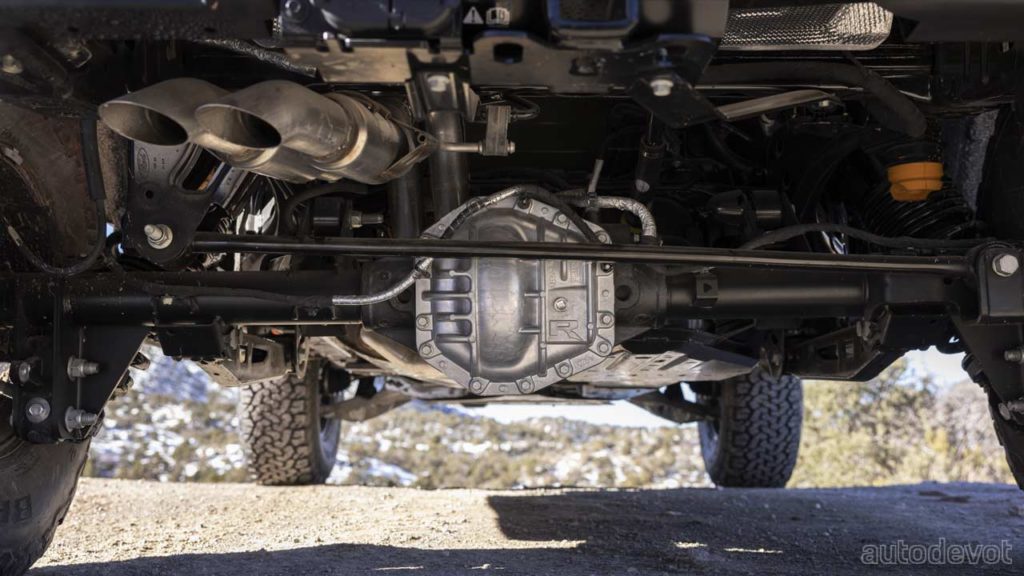 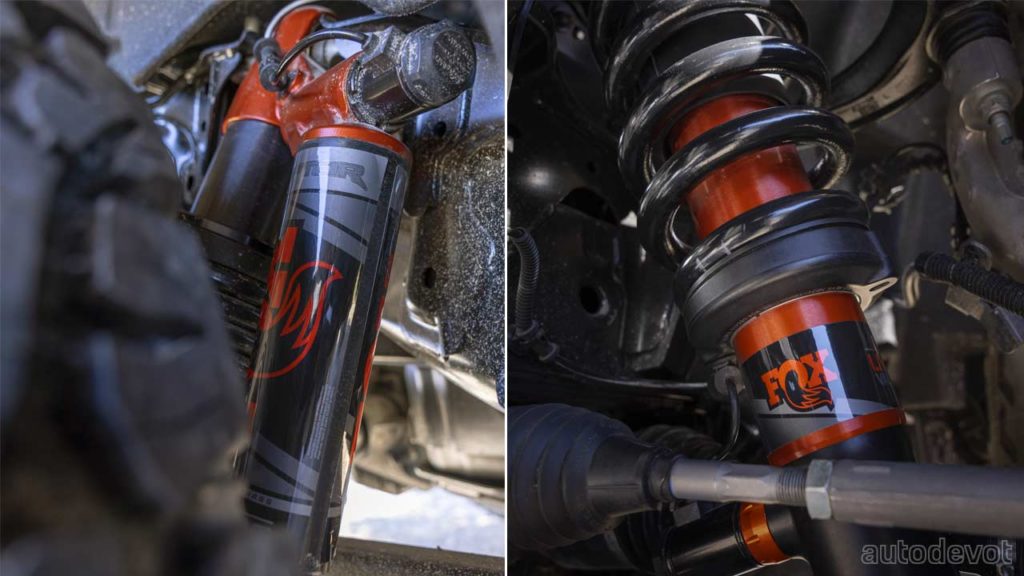 The Ford Performance team collaborated with FOX to upgrade the High-Performance Off-Road Stability Suspension (HOSS) system with Live Valve technology. Similar to the F-150 Raptor’s position-sensitive damping design, the Raptor HOSS 4.0 system features FOX 3.1 Internal Bypass Semi-Active Dampers (3.1-inch diameter) that are said to be uniquely tuned at the front and rear and feature integrated reservoirs up front and remote reservoirs in the rear. Suspension height sensors and other sensors at each corner monitor terrain conditions independently hundreds of times a second and adjust suspension tuning accordingly. 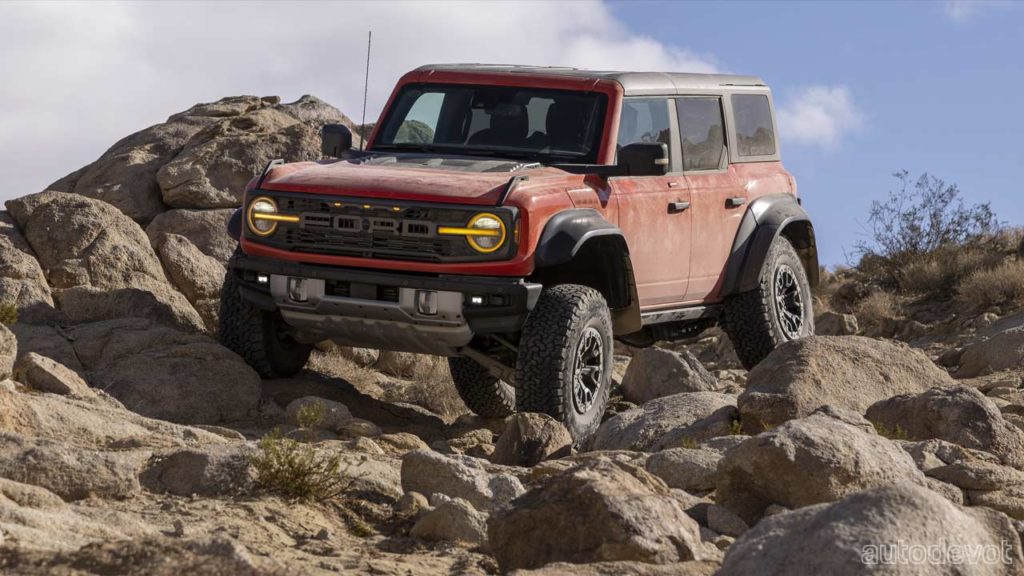 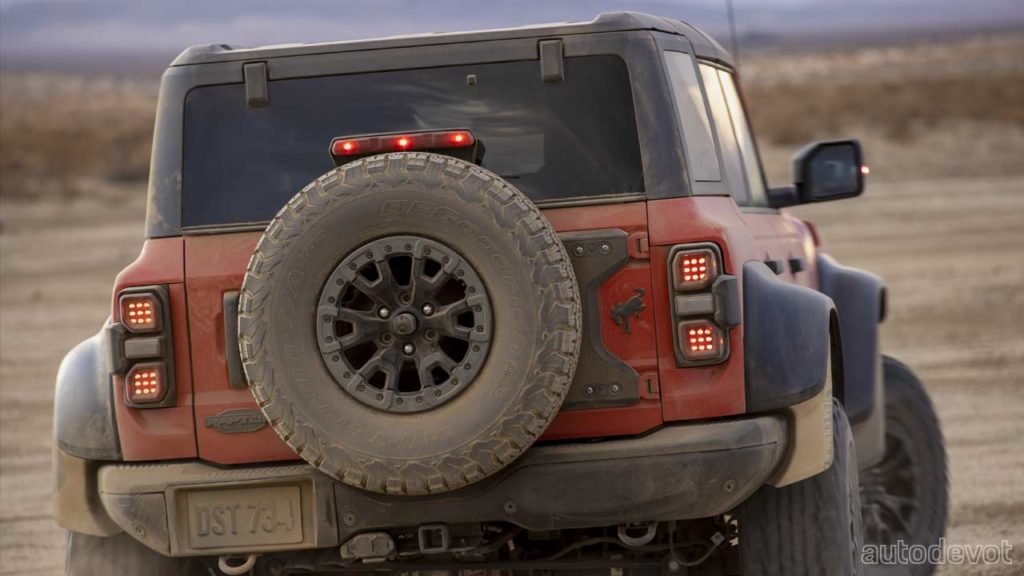 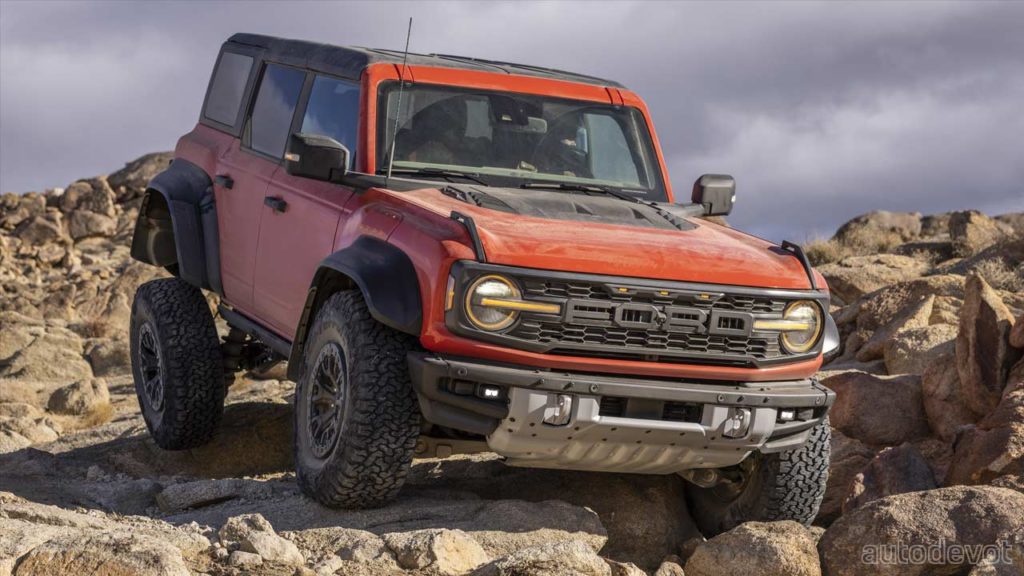 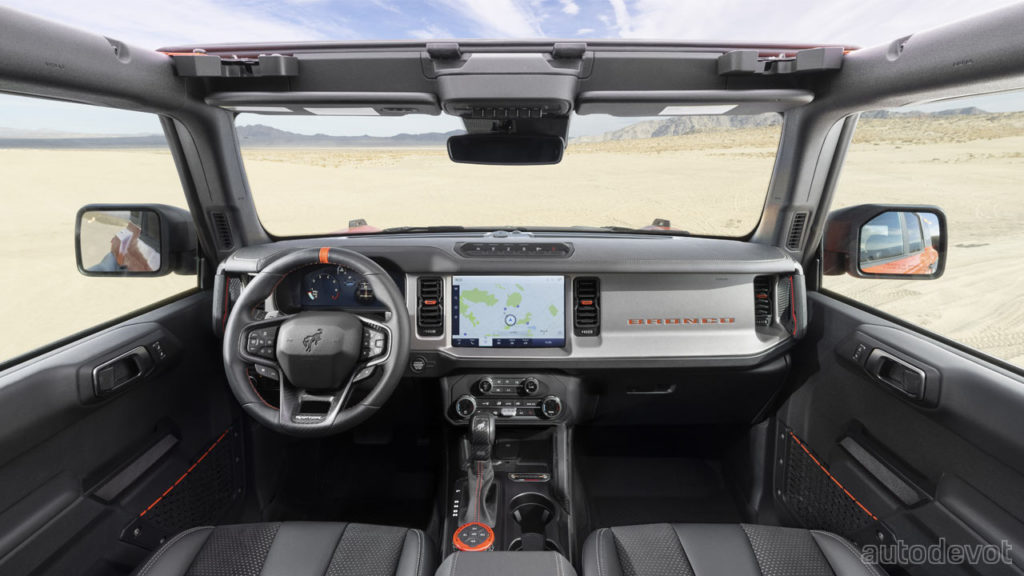 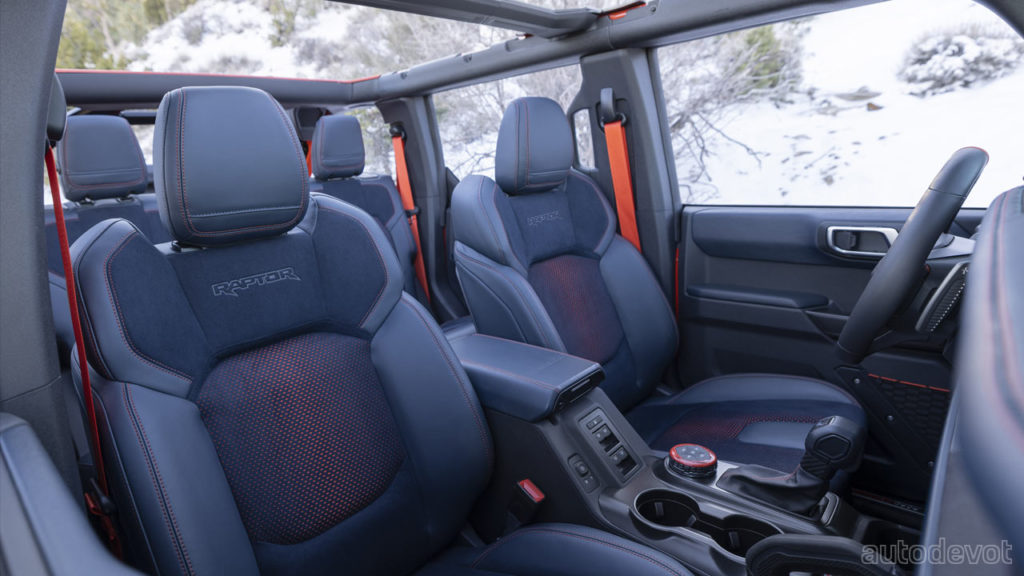 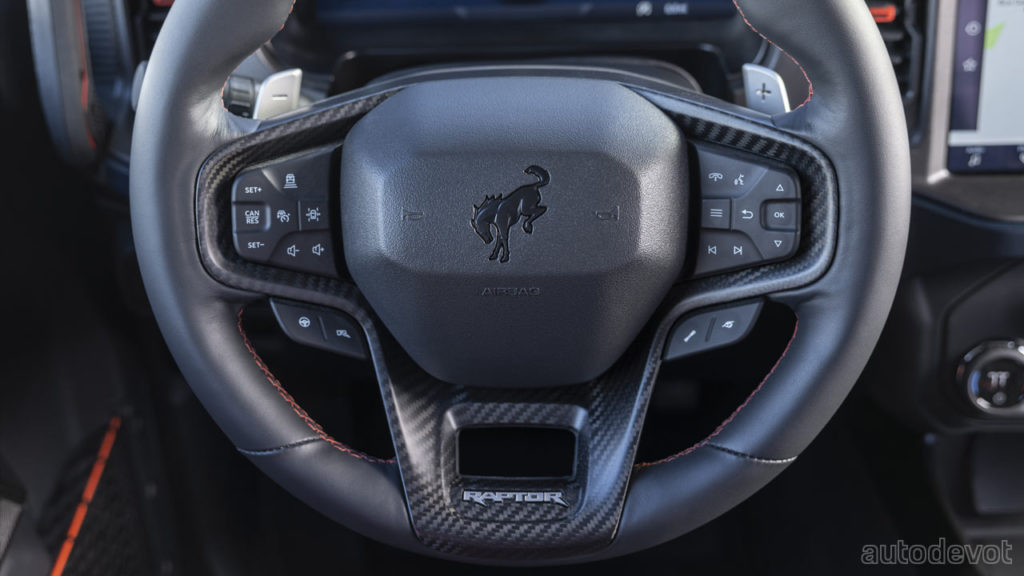