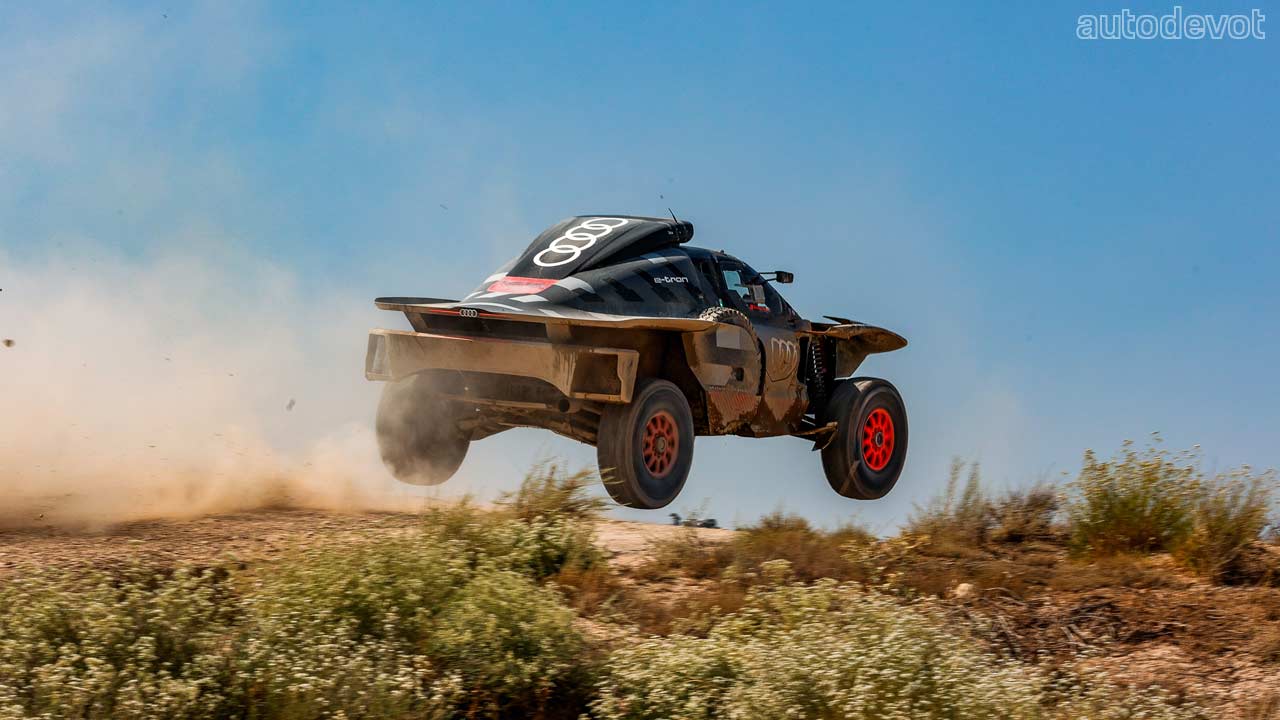 Remember the Audi RS Q e-tron Dakar Rally car? Well, now there’s a second evolution of it called the RS Q e-tron E2, all set to make its debut at the 2022 Morocco Rally this October, followed by the 2023 Dakar Rally debut, of course. The new model is still a series hybrid one with the system output limited to 288 kW (392 metric hp), but boasts significantly enhanced aerodynamics. 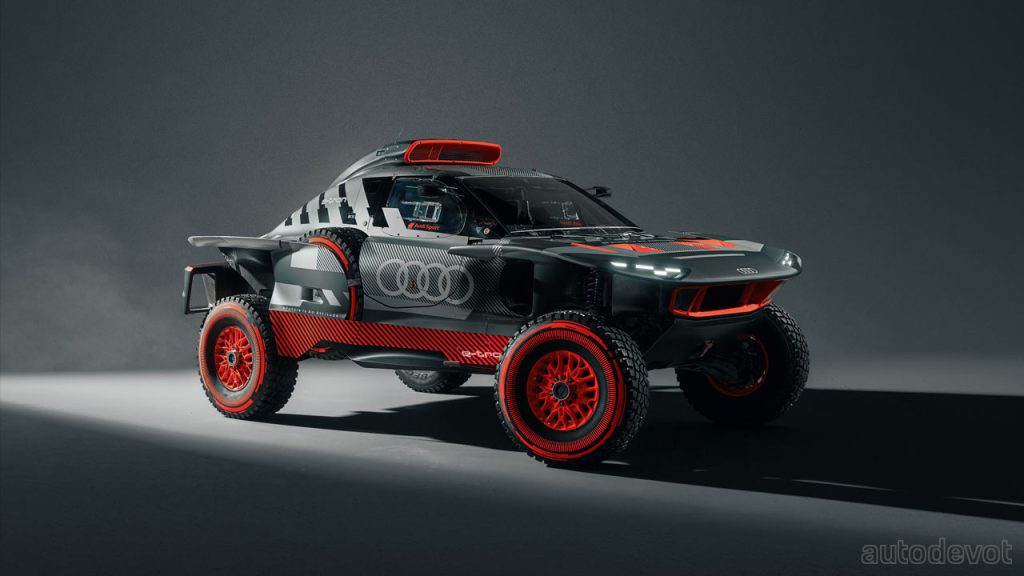 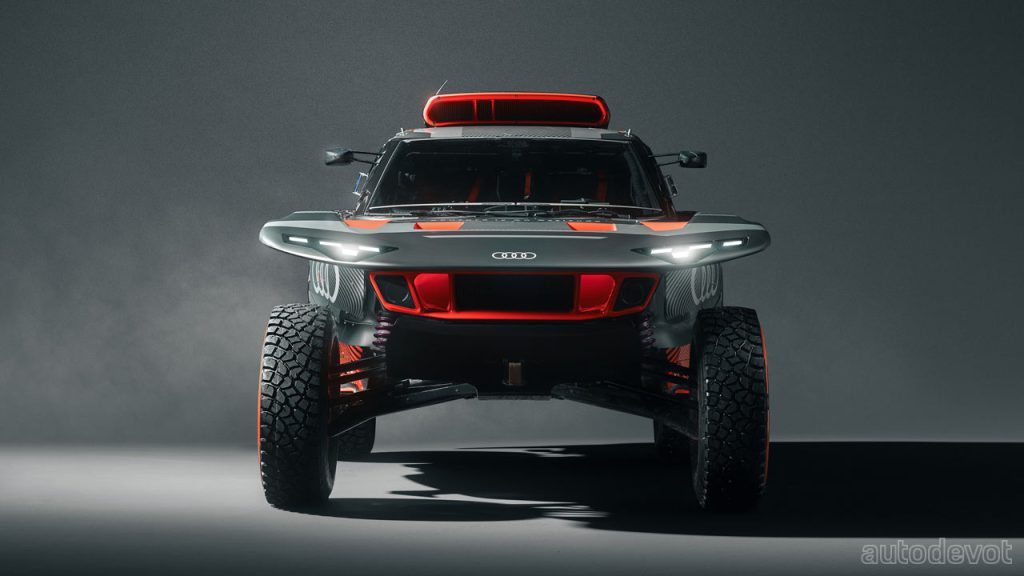 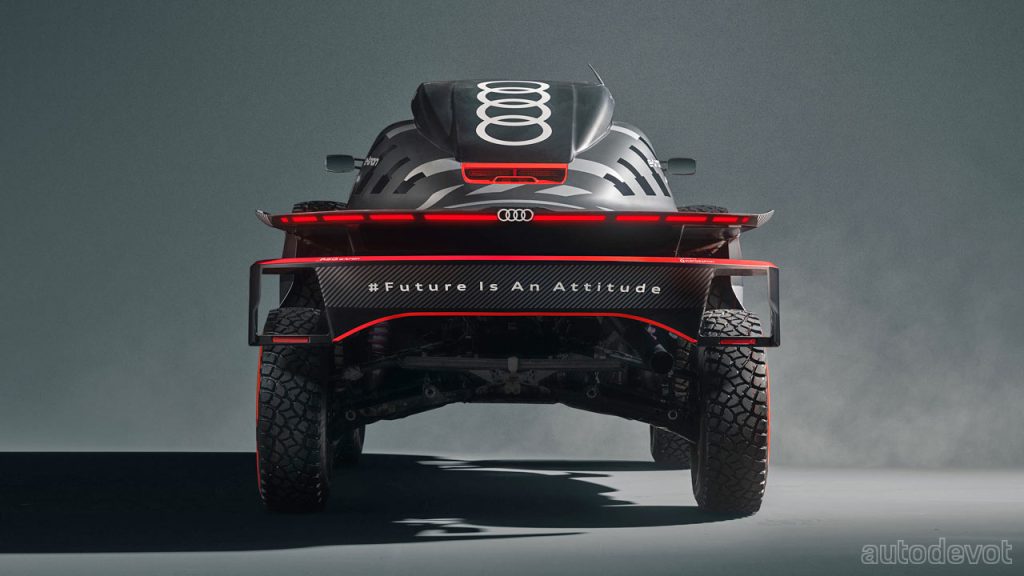 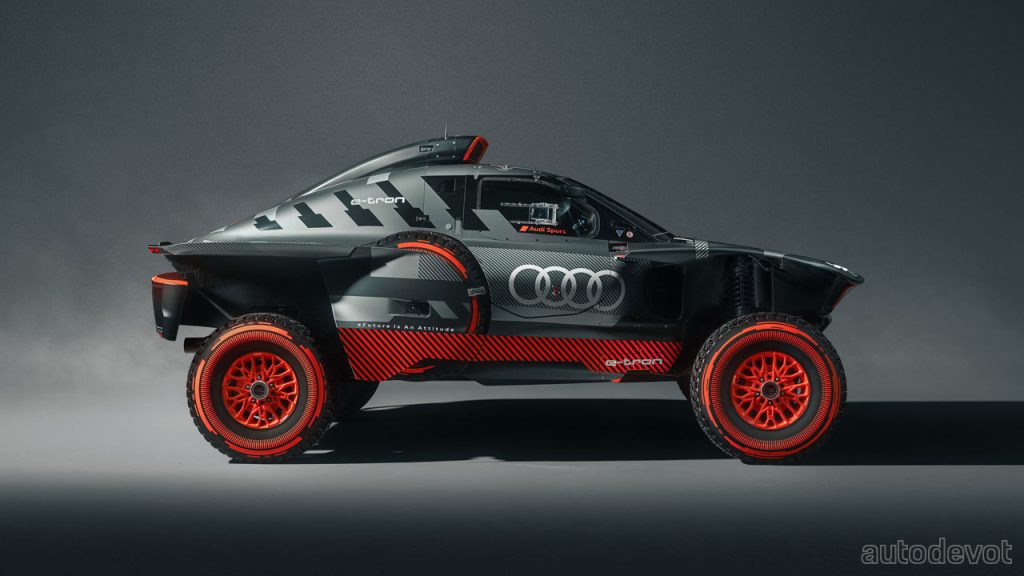 According to Axel Löffler, Chief Designer of the RS Q e-tron, the RS Q e-tron E2 does not adopt a single body part from its predecessor. In order to comply with the prescribed interior dimensions, the cockpit, which was previously narrowly recessed towards the roof, is now significantly wider. The front and rear hoods have also been redesigned. “We are now doing away with the underflow of the rear hood to the left and right of the B-pillars. In conjunction with modified lay-ups, i.e. optimized fabric layers of the composite materials, this solution reduces weight,” said Löffler. 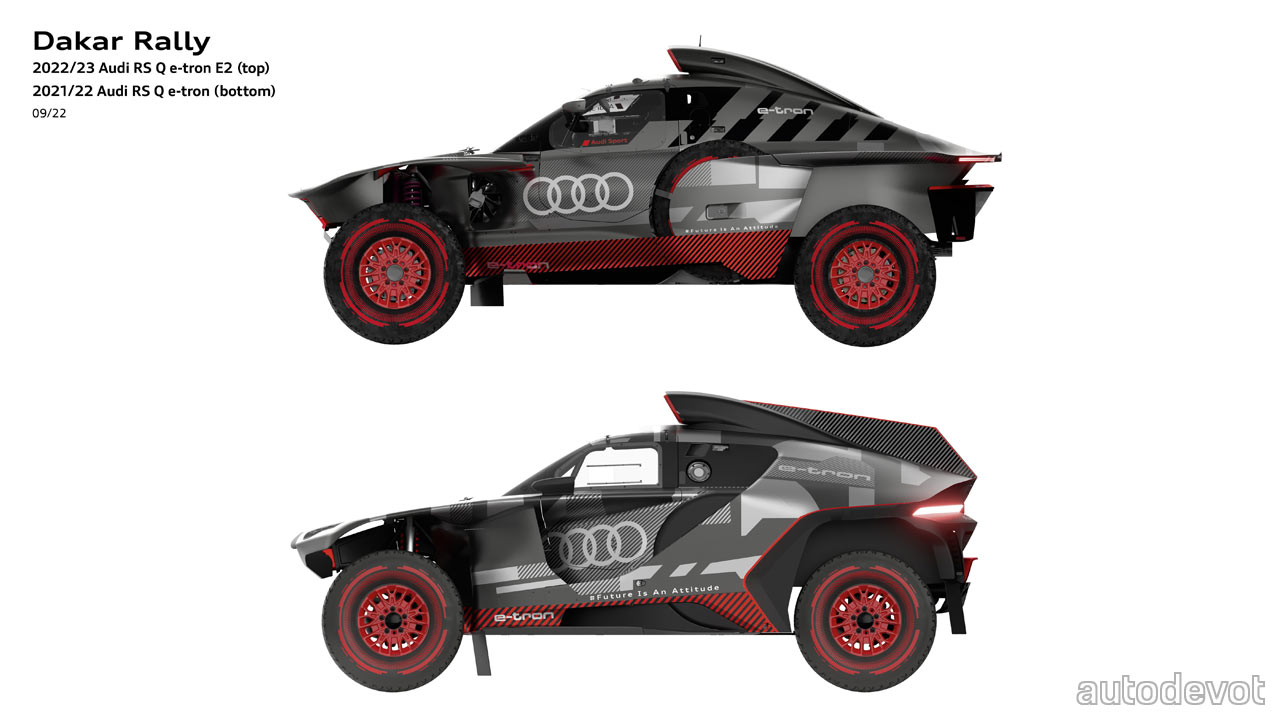 The body below the hood now is pretty much reminiscent of the shape of a boat’s hull, again, for better aero. The designers have gotten rid of the part of the front fenders that was behind the wheels and formed a fairly smooth transition to the door, thereby saving some weight and optimizing the air flow. Also, flat and easily removable body panels replace the previous bulky covers for the spare wheels in the flanks. The new 10-spoke rims from partner Rotiform are apparently much easier to handle. The off-roader without drivers weighs ~2,100 kg (4,630 lbs).

But anyway, the overall aerodynamic drag is claimed to be cut by 15%, however, this doesn’t change the top speed due to regulations. It remains limited to 170 km/h (106 mph). 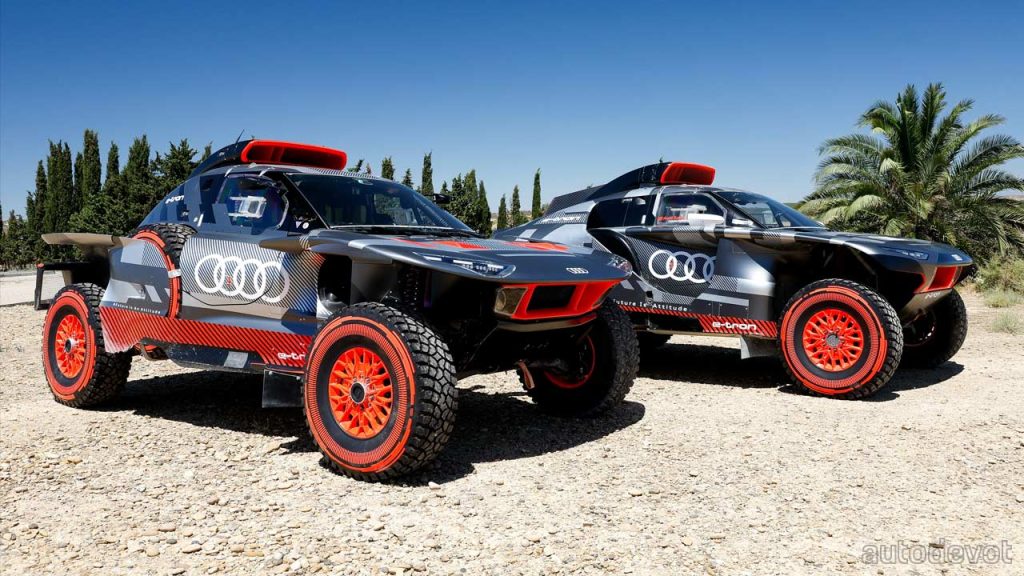 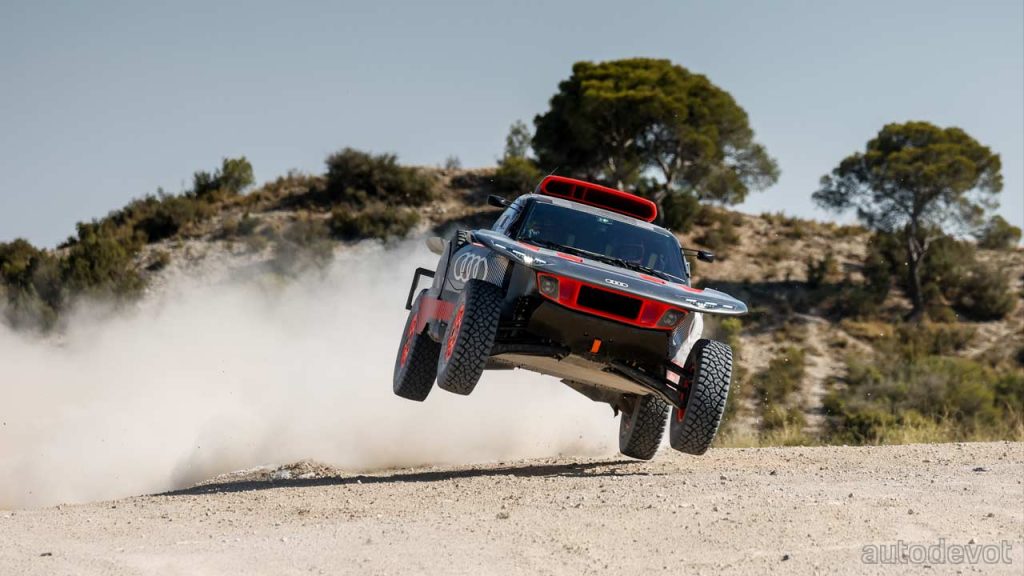 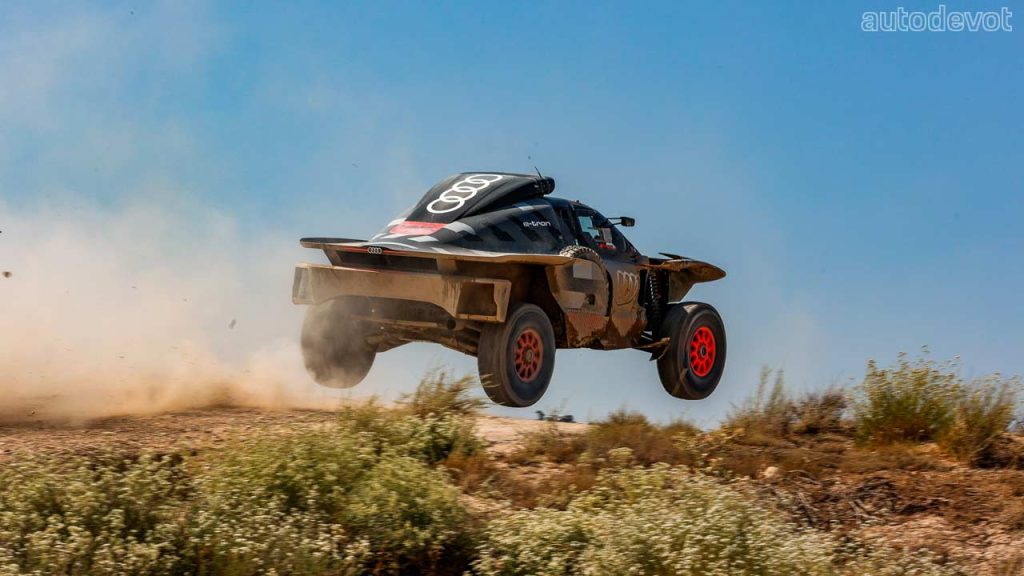 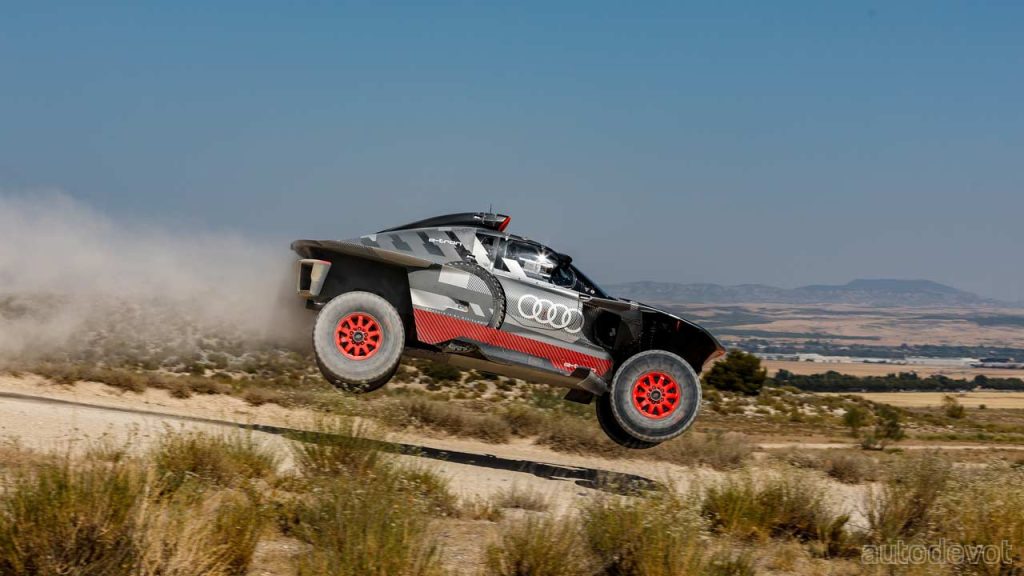 The RS Q e-tron E2 continues to sport electrically driven axles with a single-speed racing gearbox per axle. Being a series-hybrid means, of course, there’s also a 2.0L 4-cylinder TFSI engine hooked-up with another MGU to recharge the battery pack. The battery pack capacity remains to be 52 kWh, as is the max charging capacity of 220 kW.

But the energy management has been optimized, thanks to the learnings from the first iteration. While it was already fairly efficient, Audi noted challenges in extreme cases. At the Dakar Rally, there were surpluses of power in situations where the wheels made less contact with the ground while jumping or on uneven terrain. FIA officials intervene at a threshold of 2 kilojoules of excess energy and impose sporting penalties.

“By way of comparison, more than one hundred times the amount of energy flows to the motors per second within the permissible limits. We could have made it easy on ourselves and set our threshold several kilowatts lower, but that would have meant performance disadvantages. Instead, we put a lot of fine-tuning into the power controllers,” said Florian Semlinger, development engineer for embedded software, application and test bench. Therefore, two individual limits—one for each motor—are now recalculated by the software within milliseconds. And as a result, it is said to operate precisely along the permissible limit. The air conditioning system has also been optimized to run more efficiently.