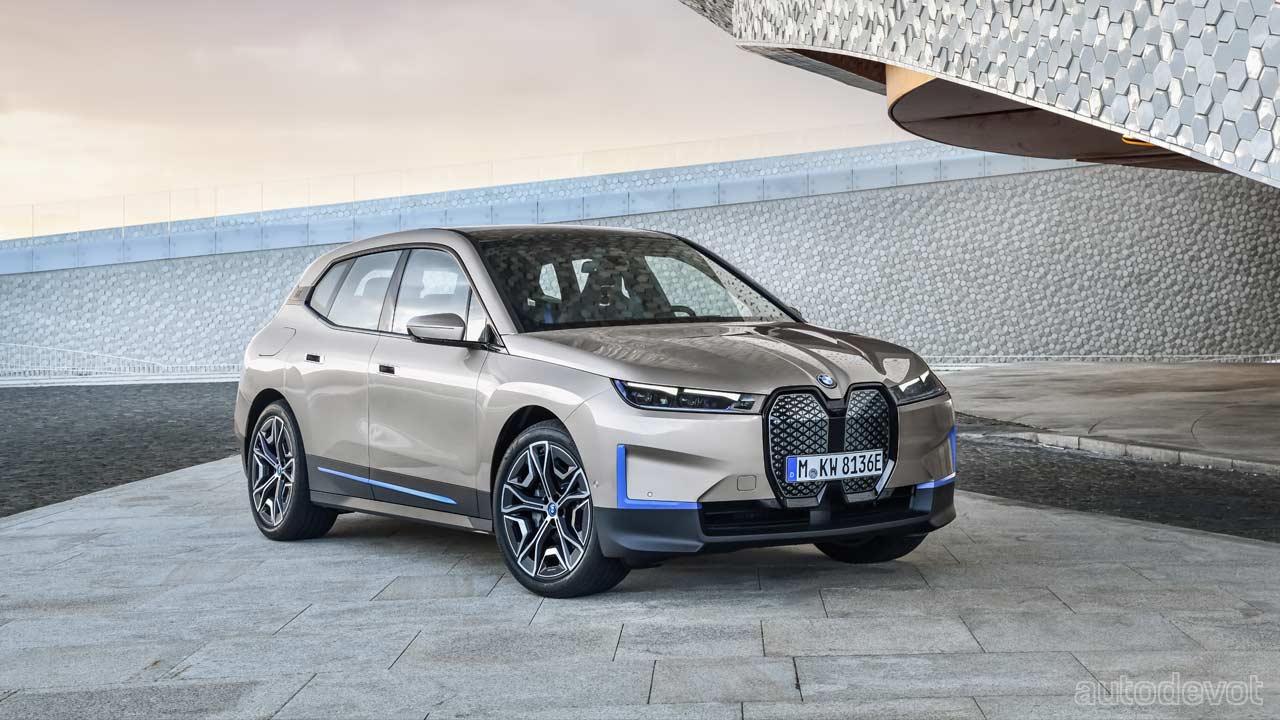 That’s right. The BMW iX is the (near) production version of the iNEXT concept that we saw in 2018. It’ll go into series-production at the BMW Dingolfing plant in the second half of 2021 and will go on sale in select markets at the end of 2021. 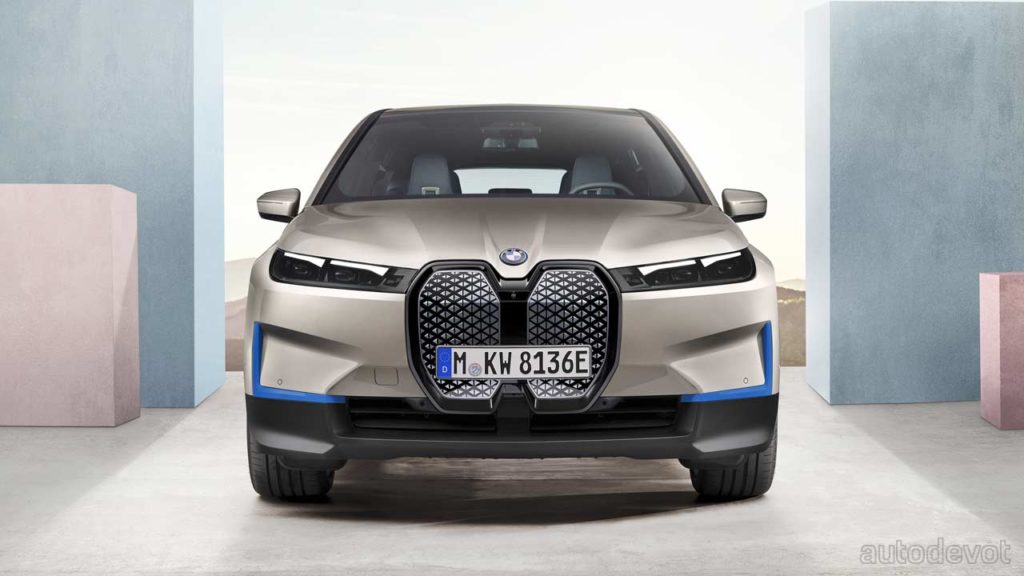 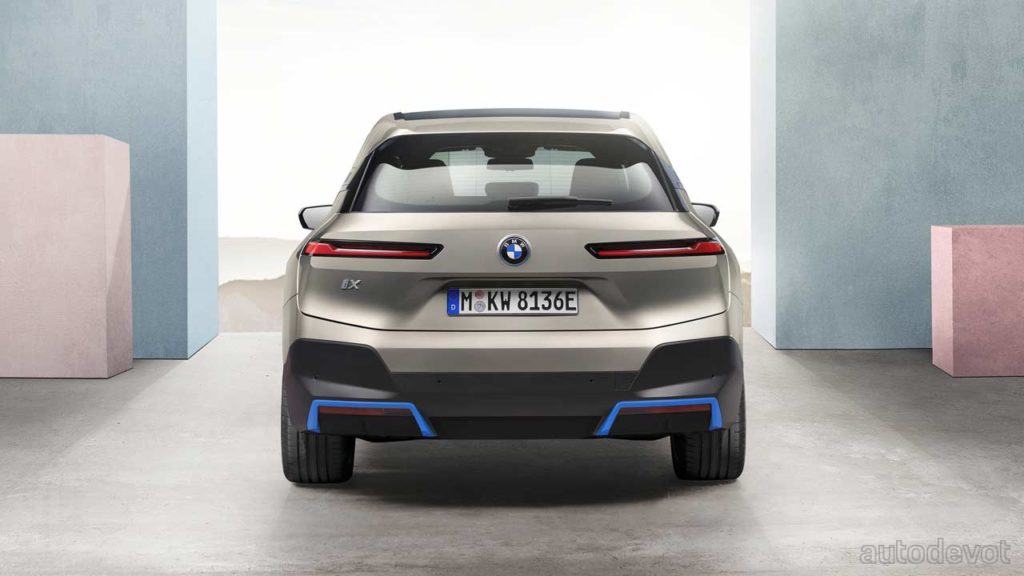 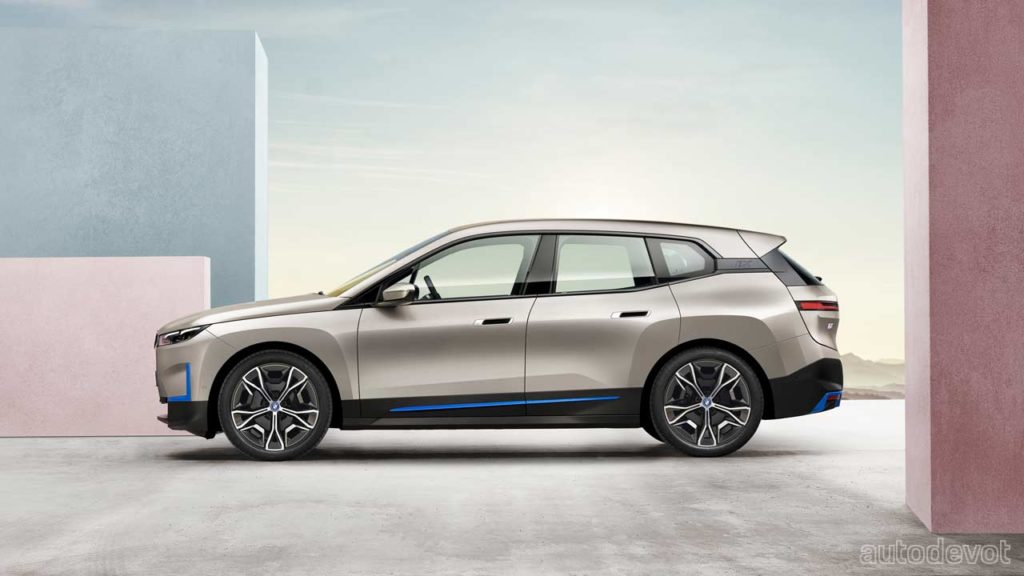 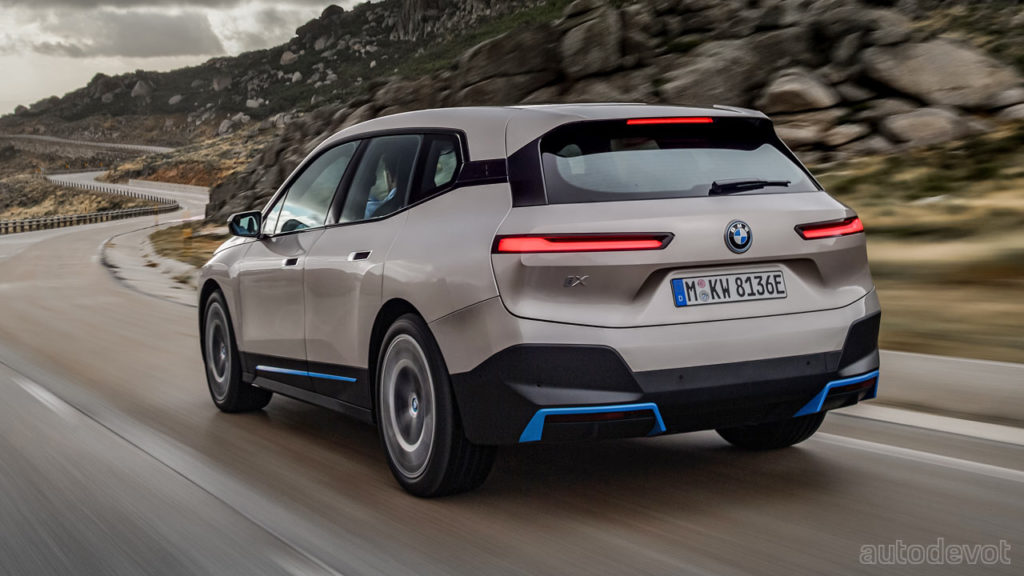 Alright. Now that’s out of the way, let’s talk a little bit about its styling, starting with the obvious one, which is, of course, its massive front grille. It is almost as big as the one in the concept, but the license plate tries to make it look a little bit less awful. The standard model gets those L-shaped bumper inserts from the concept. 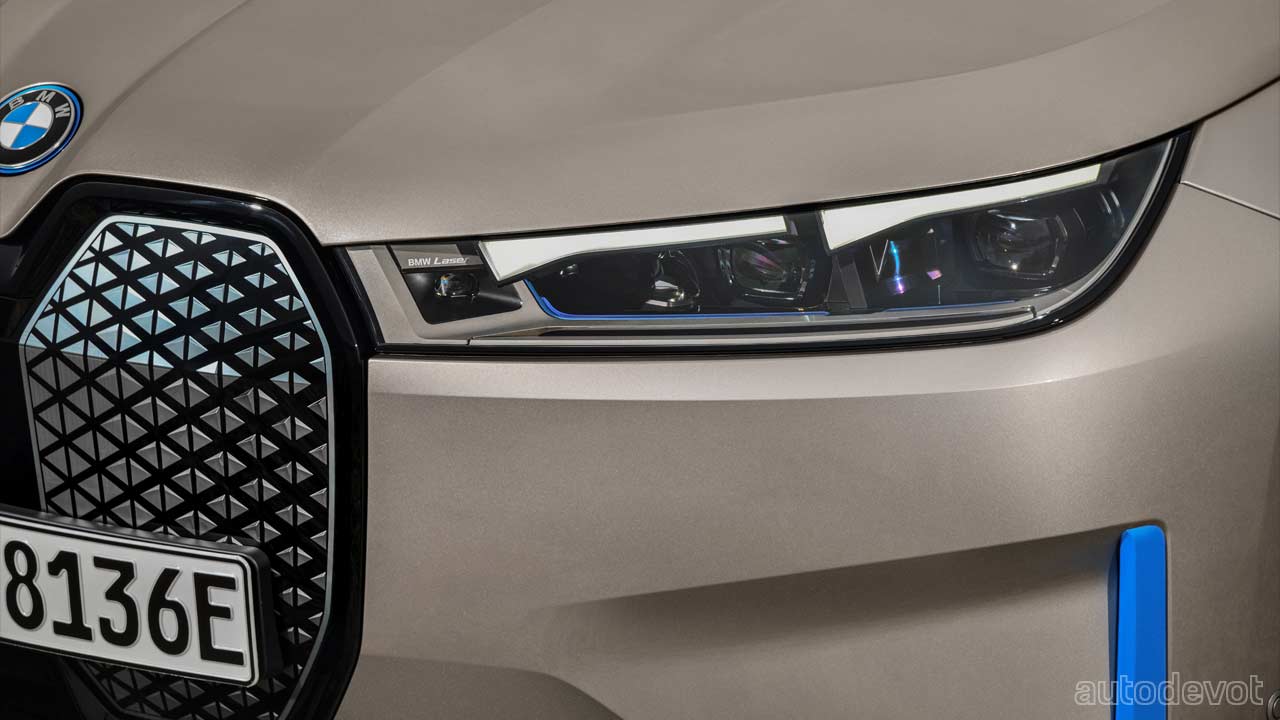 As we can see, the grille is blanked-off with just a pattern that mimics a mesh. Although the iX gets the full-LED headlights as standard, the ones featured here in the photos are the optional Laserlight. 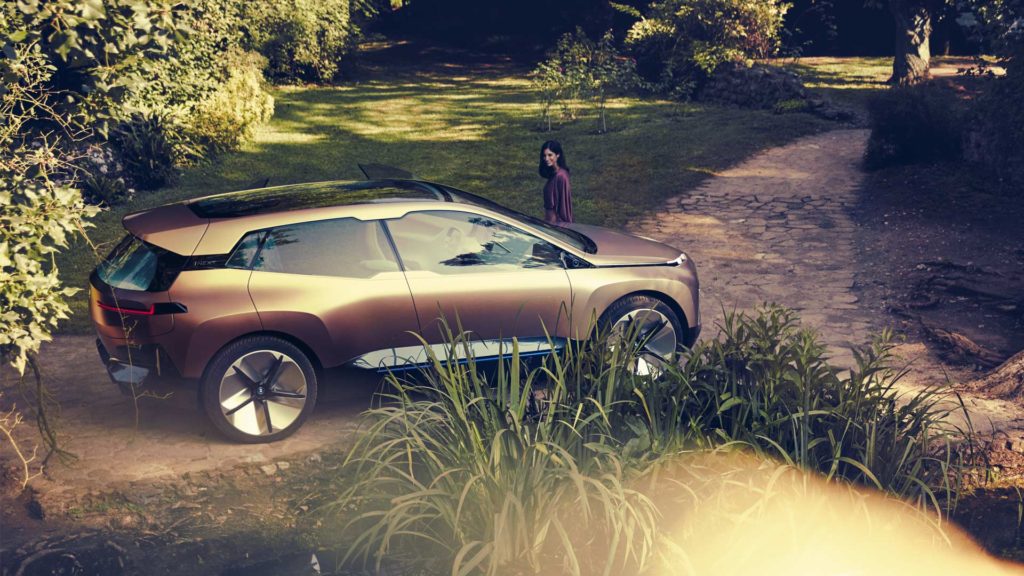 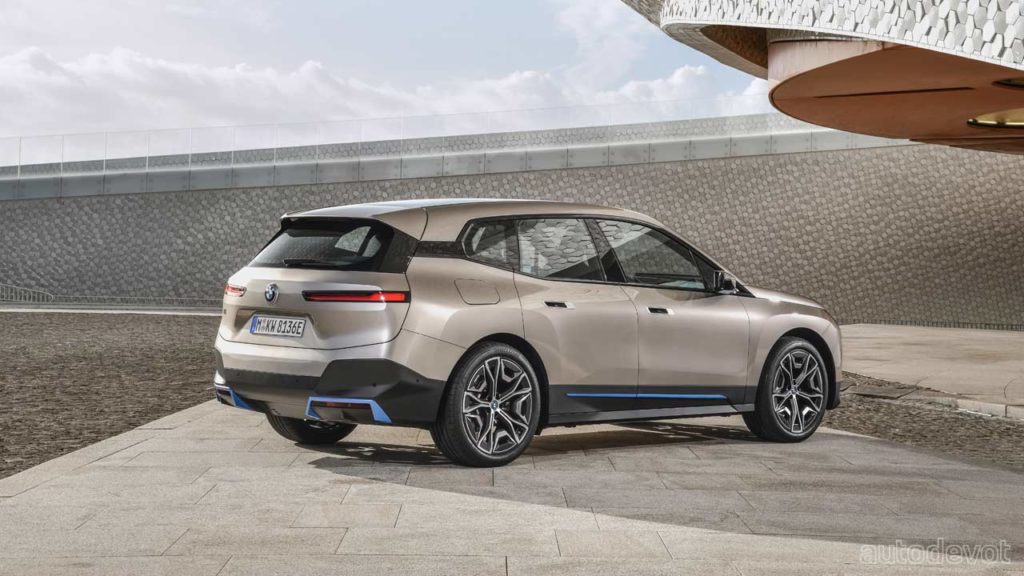 On the side profile, the C-pillar gets a black applique to sort of mimic a floating roof effect. Thankfully, those dramatic window kinks from the concept have been omitted in the production version. Notice the squared-off wheel arches. The rear profile looks fairly clean with narrow taillights with LED signatures that mimic those on the front. 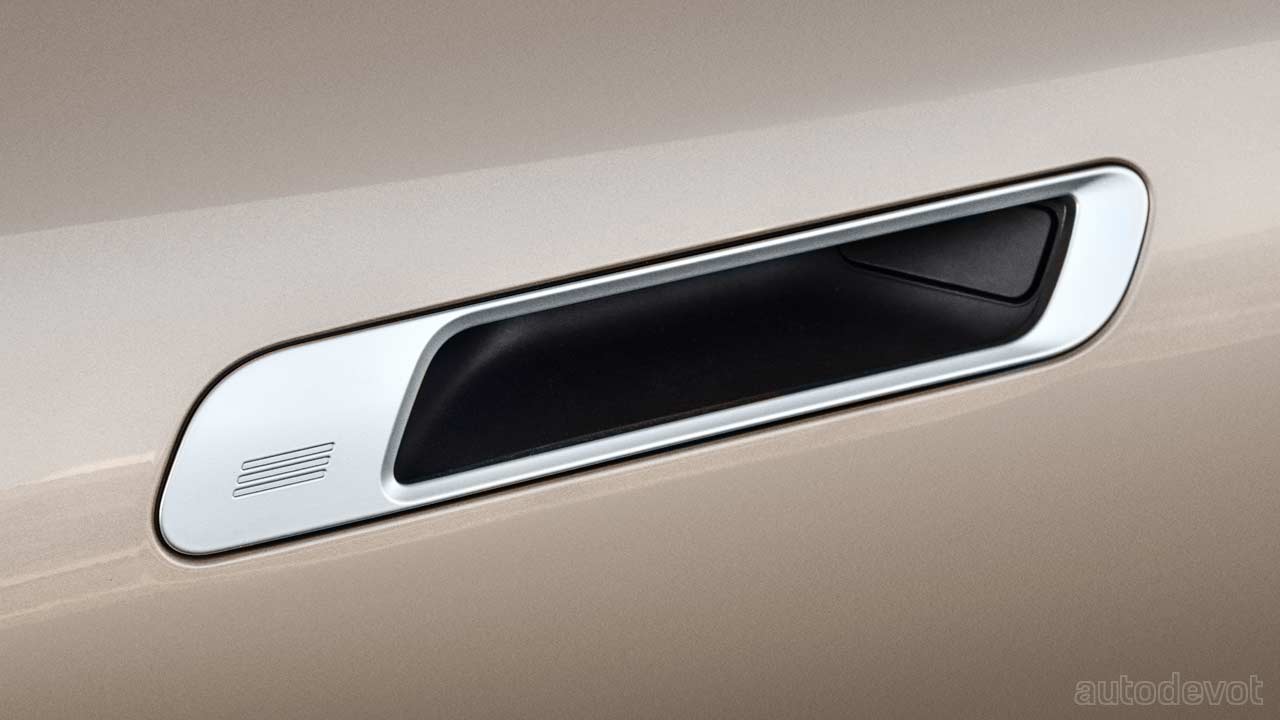 Also, the iX gets something called ‘Shy Tech’, which is nothing but the features that are hidden from view or neatly packaged into a compact element. These include the flush-fitting door openers with a hidden button; front BMW badge that doubles as a filler cap for windscreen washer fluid; and the rear BMW badge that integrates a rearview camera and a cleaning system. 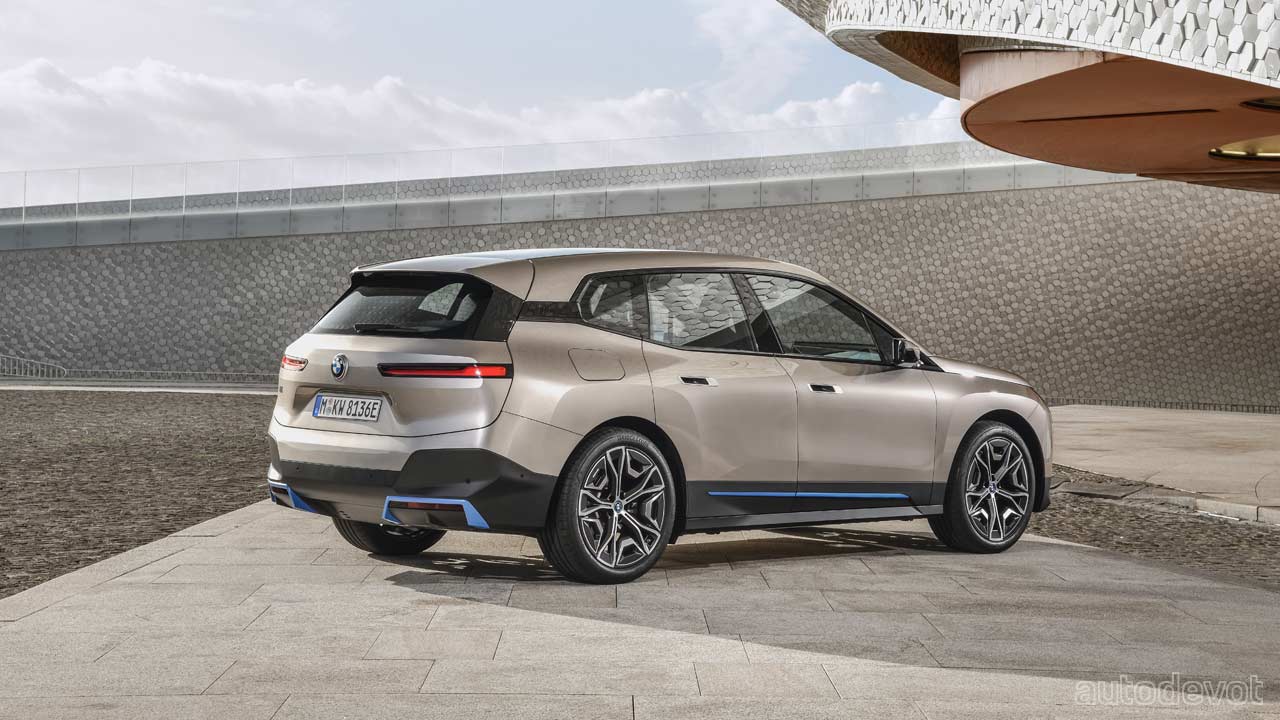 The standard car rides on 20-inch ‘Air Performance’ light-alloy wheels, while up to 22-inch wheels are available in the options list. These wheels are claimed to weigh about 15% less than the conventional light-alloy wheels and are also claimed to increase the range by as much as 15 km (9.5 mi). In case you’re wondering, the iX boasts a Cd figure of 0.25. 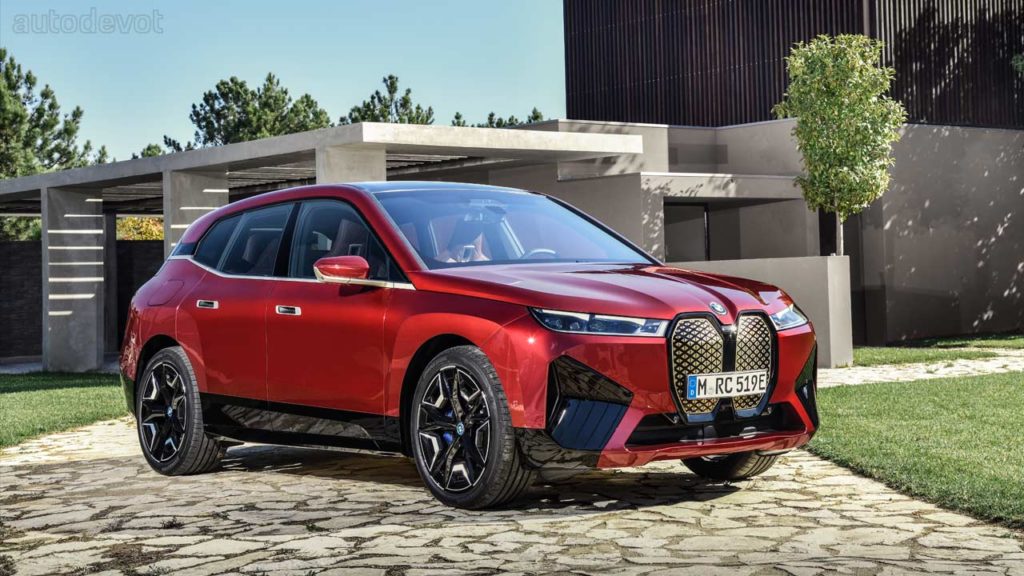 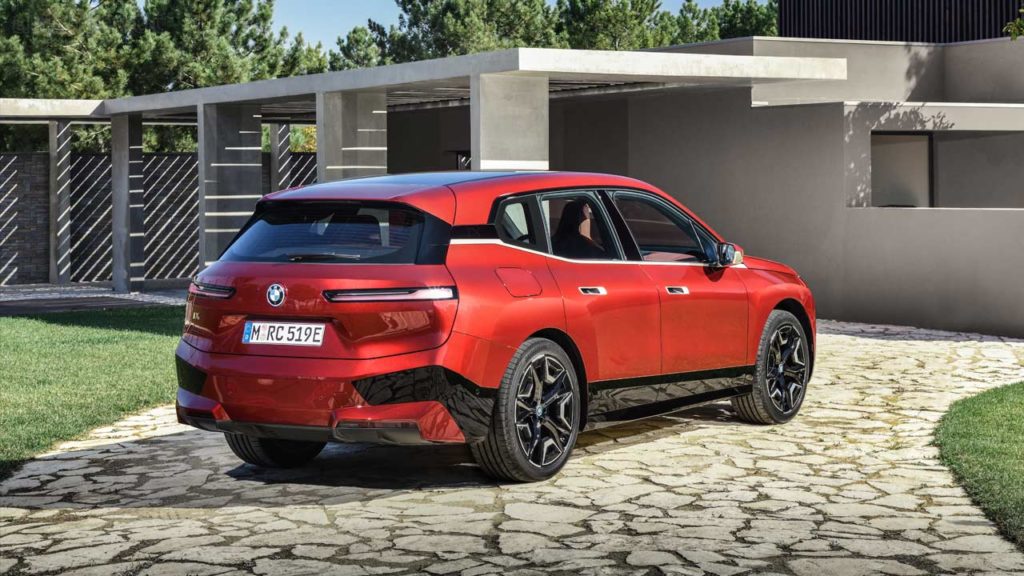 For those who find the standard iX to be a bit boring or too minimalistic, the Sports Package will offer some oomph factor with a sporty front & rear bumpers with gloss black accents; smoked-effect headlights & taillights; contrast accents on the window line and door openers; and of course, the 22-inch gloss black wheels the example here is wearing. 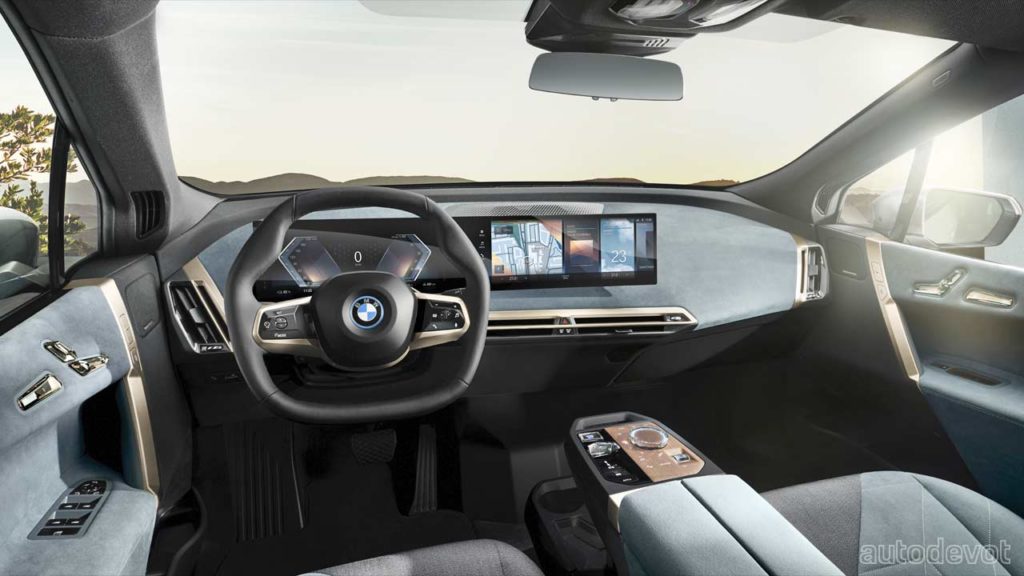 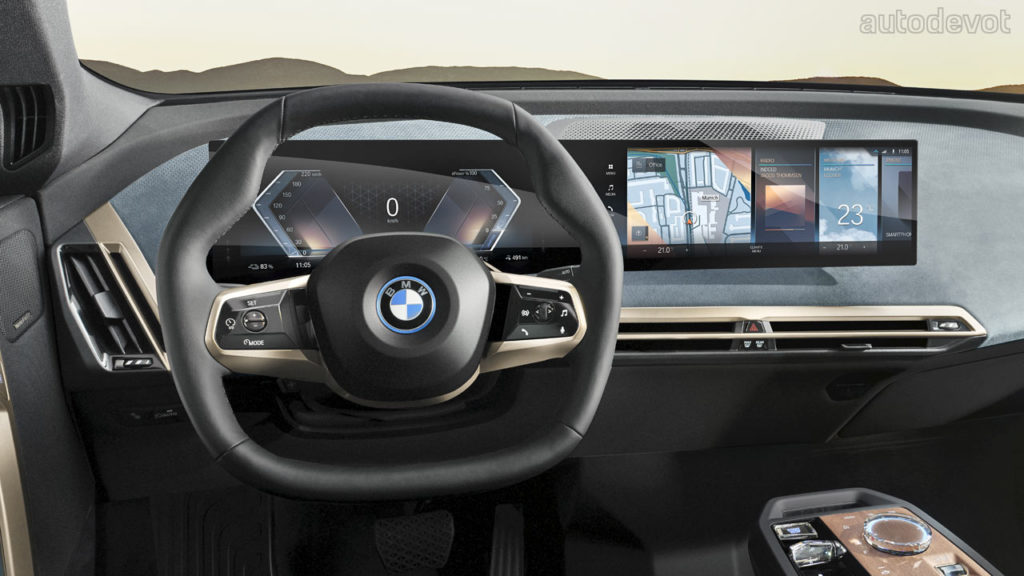 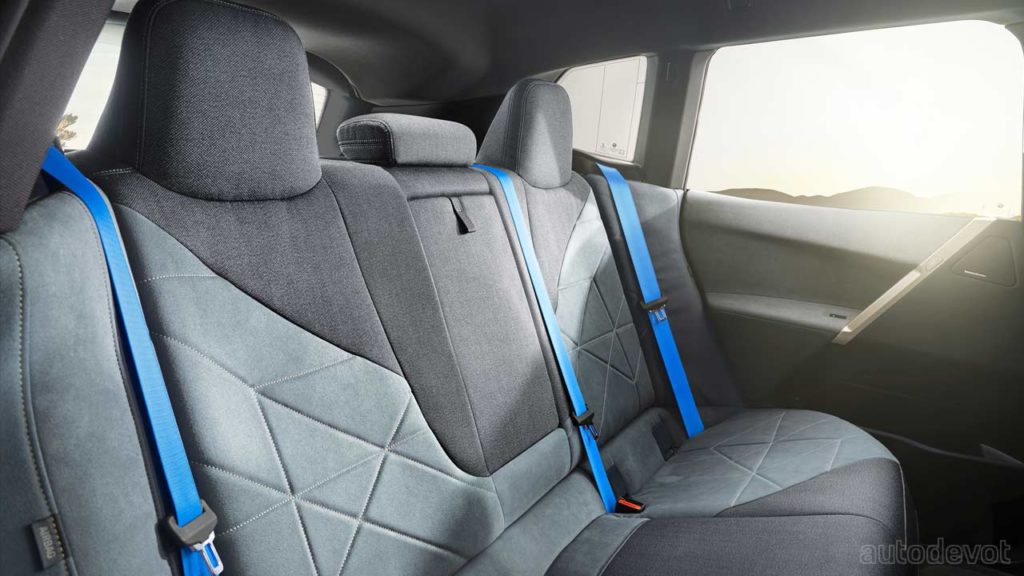 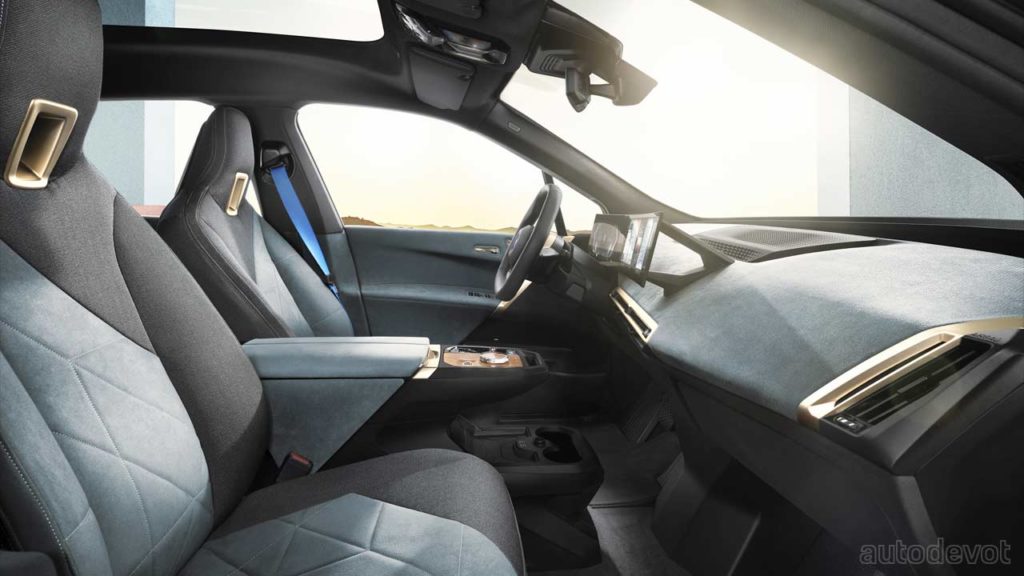 Moving on, the interior continues the minimalistic theme with a curved floating display on the dashboard; narrow central air vents; and a rather futuristic-looking hexagonal-ish steering wheel. According to BMW, the shape of the steering wheel is ideal for switching between automated and active driving. 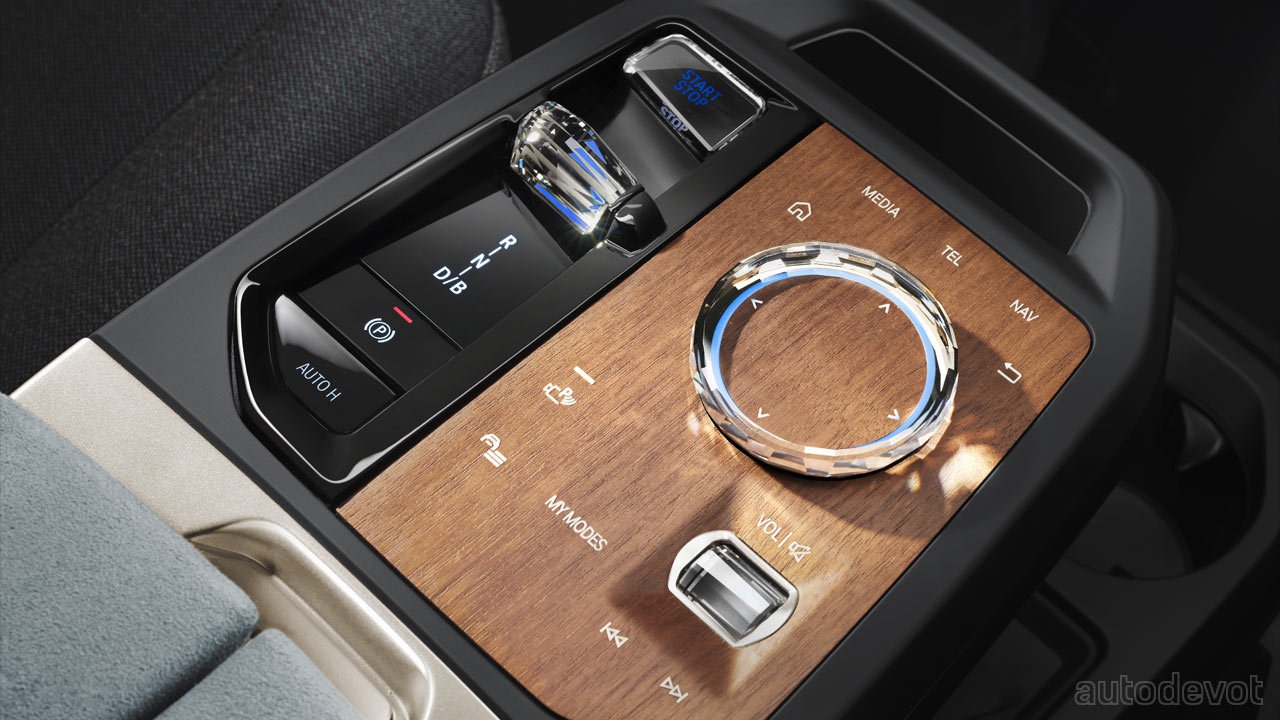 The centre console features touch-sensitive surfaces and crystal-finished controls over a open-pore wood insert. With the optional Loft trim, the cabin can be upholstered in a combination of high-quality textile and microfibre fabrics for a lounge-like ambience. Being an all-electric vehicle, the iX also boasts some recycled material use.

The Shy Tech on the inside would include a Head-Up Display integrated into the aforementioned curved floating display — on the driver side, and some of the speakers that are hidden from sight.

As for the automated driving, BMW claims to have packed the latest technology into the iX, with the computing power that is capable of processing 20 times the data volume of previous models.

We are setting new industry standards with the technology in the BMW iX. The iX has more computing power for data processing and more powerful sensor technology than the newest vehicles in our current line-up, is 5G capable, will be given new and improved automated driving and parking functions and uses the high-performing fifth generation of our electric drive system. – Frank Weber, Member of the Board of Management, BMW 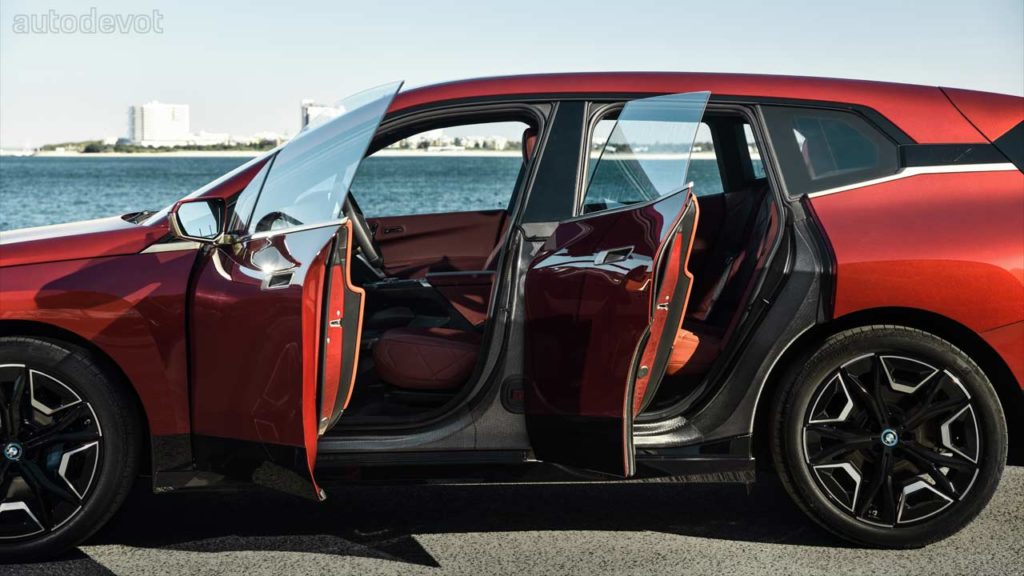 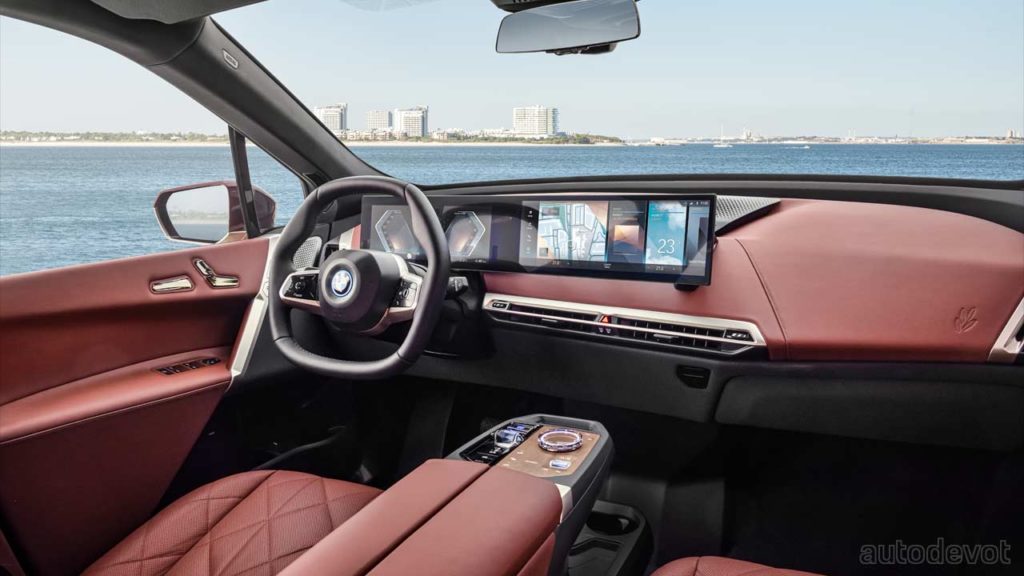 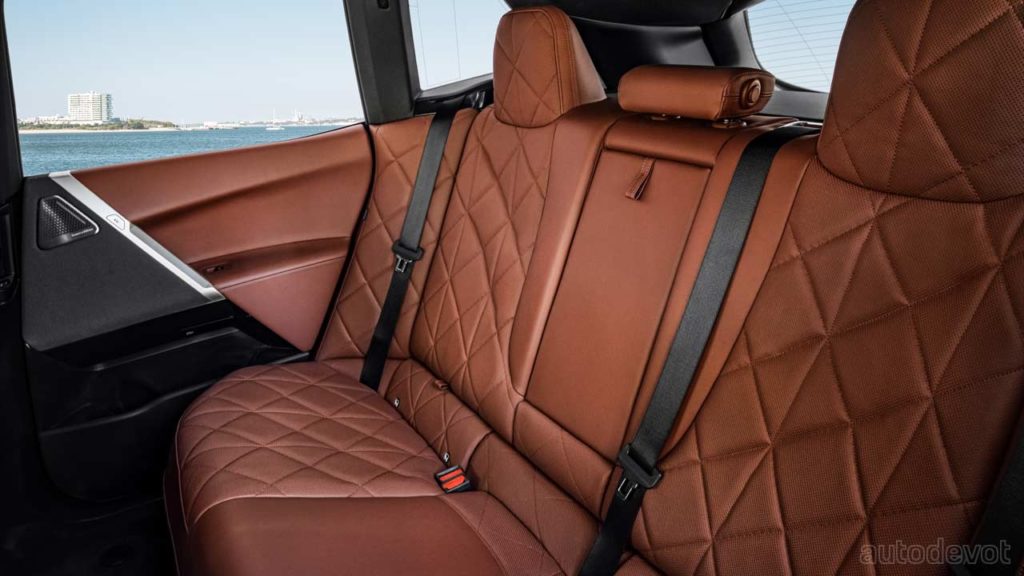 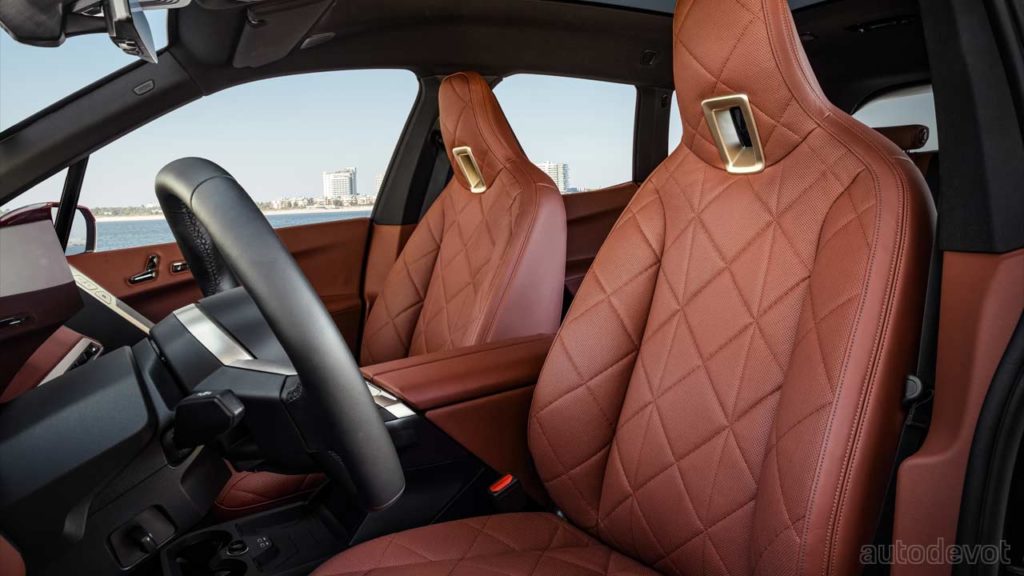 Moving on to the business end of the story then. The BMW iX is powered by the 5th generation eDrive technology. In simple words, there are two electric motors, one at each axle, producing a combined 370 kW (503 metric hp). The all-electric crossover is claimed to sprint from 0-100 km/h (62 mph) in less than 5.0 seconds, should such things interest you.

The floor-mounted battery pack with a gross energy content of over 100 kWh is estimated to deliver a range of over 600 km (372+ mi) in the WLTP cycle. Also, BMW is targeting “an exceptionally low combined electric power consumption figure” of 21 kWh per 100 km (62 mi) in the WLTP test cycle. 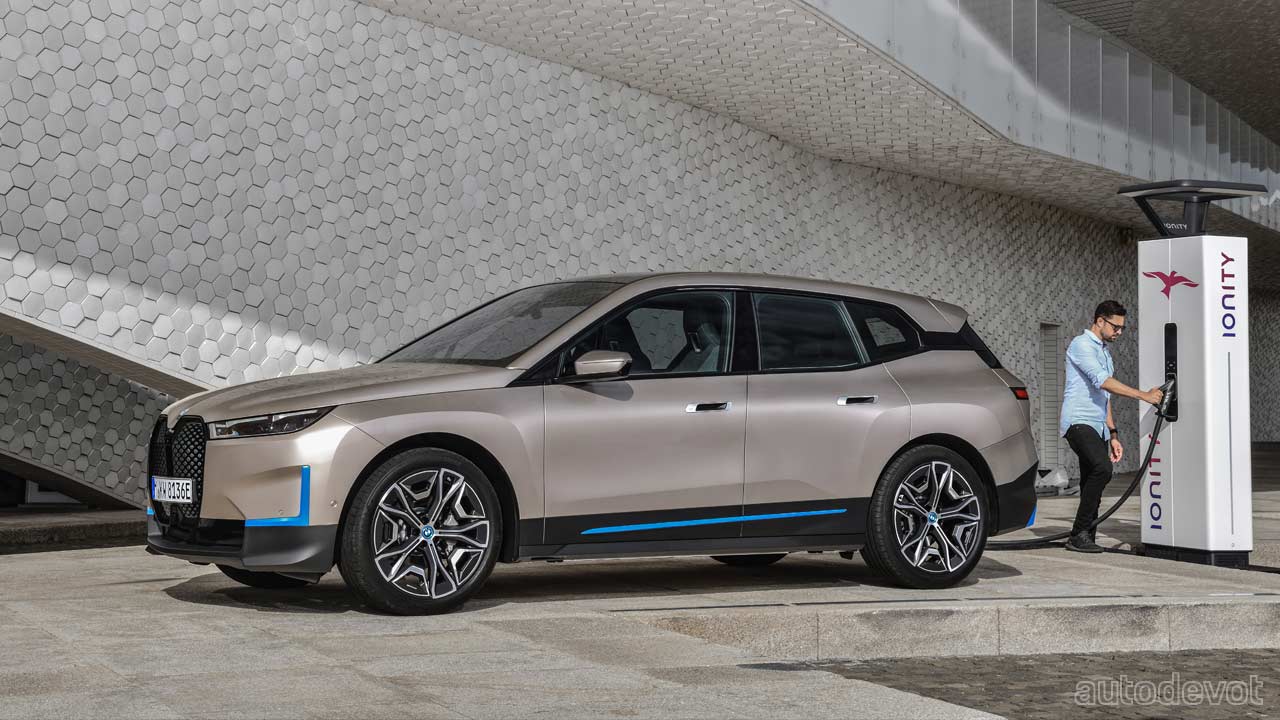