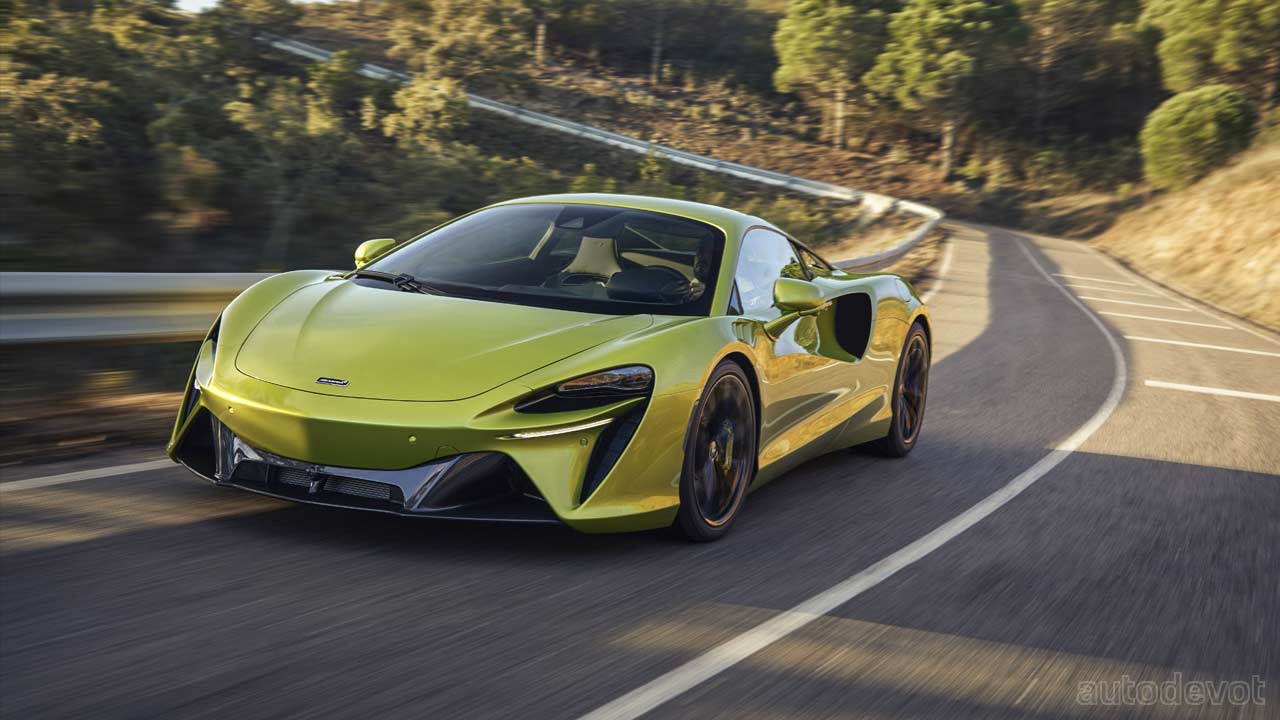 As announced in November 2020, McLaren has revealed the Artura, the brand’s first series-production hybrid supercar. Depending on the market, order books are already open, with prices starting at £185,500 in the UK. The Artura marks a few more firsts for McLaren, including the first model to be built on a new carbon monocoque tub and the debut of advanced driver-assistance systems (ADAS). 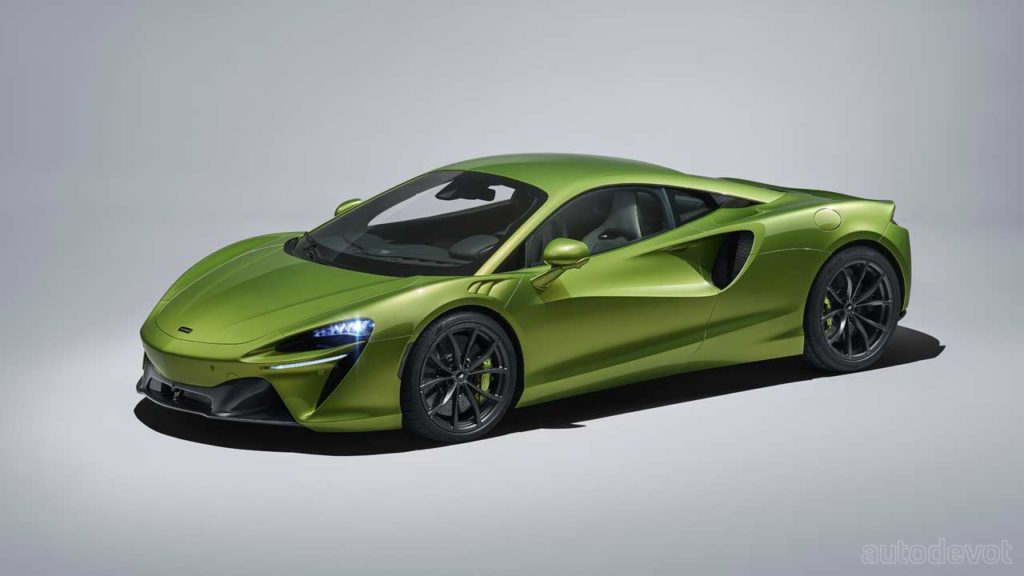 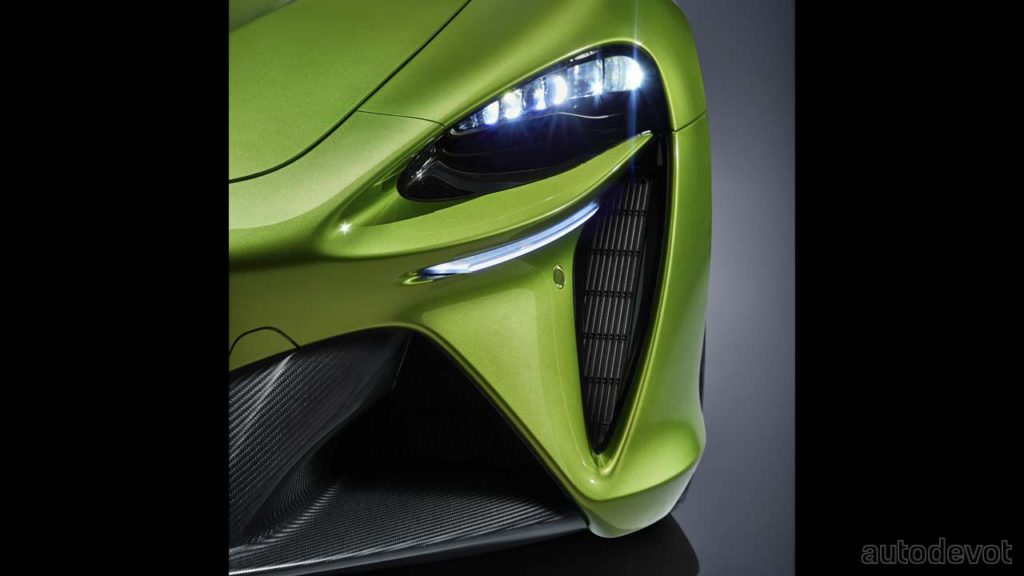 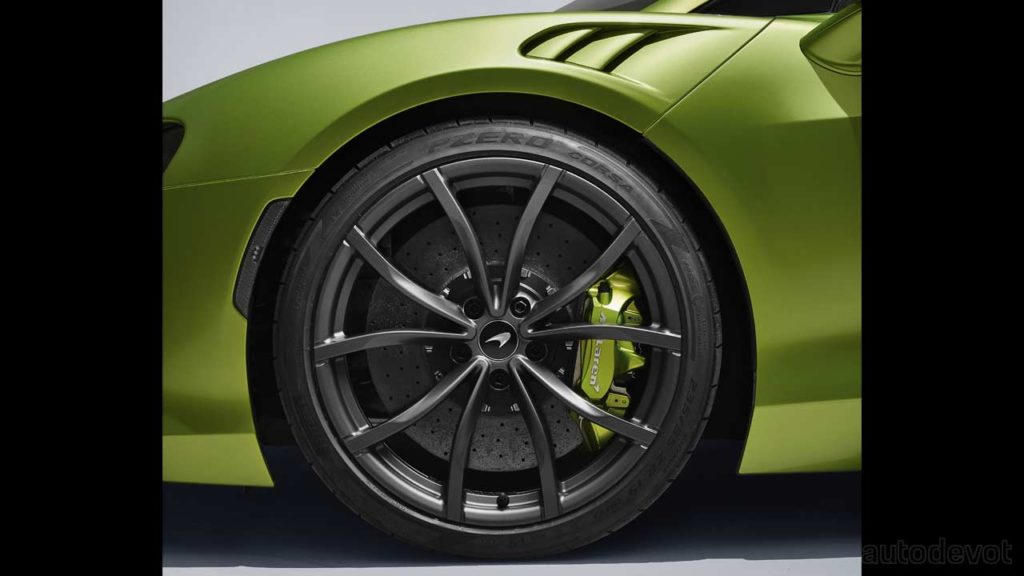 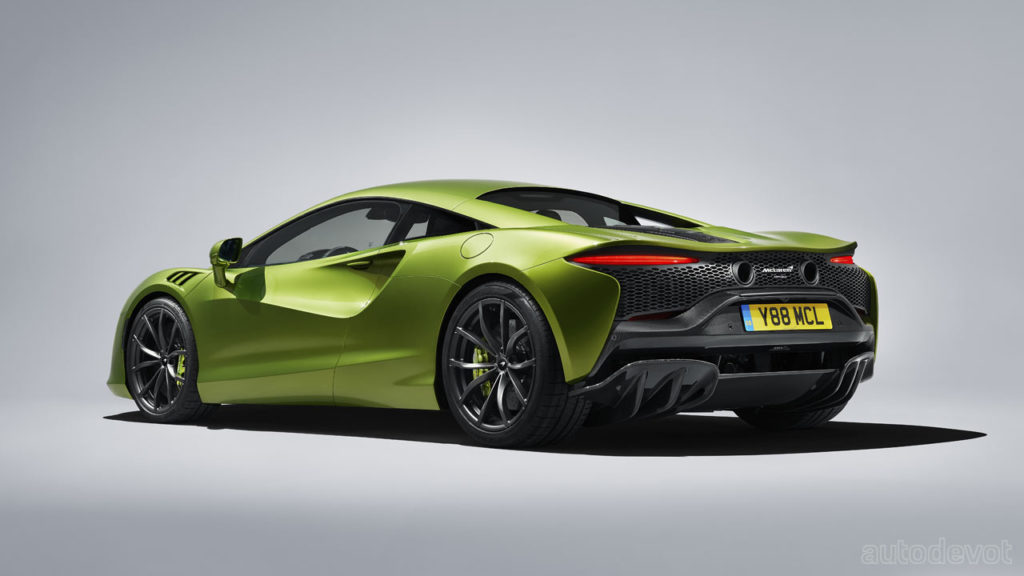 The first series-production hybrid supercar because of course, the P1 and the Speedtail were limited. As for the design, it might remind you of the GT from many angles, but looks a bit more sporty with more intakes and louvers compared to the former’s relaxed design. The headlights contain 21 LEDs per unit, while the taillights play a triple role of being taillights, brake lights and turn signals. The wheels measure 19-inch at the front and 20-inch at the rear, wrapped with bespoke Pirelli P-Zero tyres with Cyber Tyre system that monitors the tyre’s health. The tyres also have a patented Noise Cancelling System (PNCS) — a sound absorbing device on the inside wall to reduce road noise. As standard, the car rides on 7-spoke cast alloy wheels, while there are 5-spoke and 10-spoke forged alloy options. 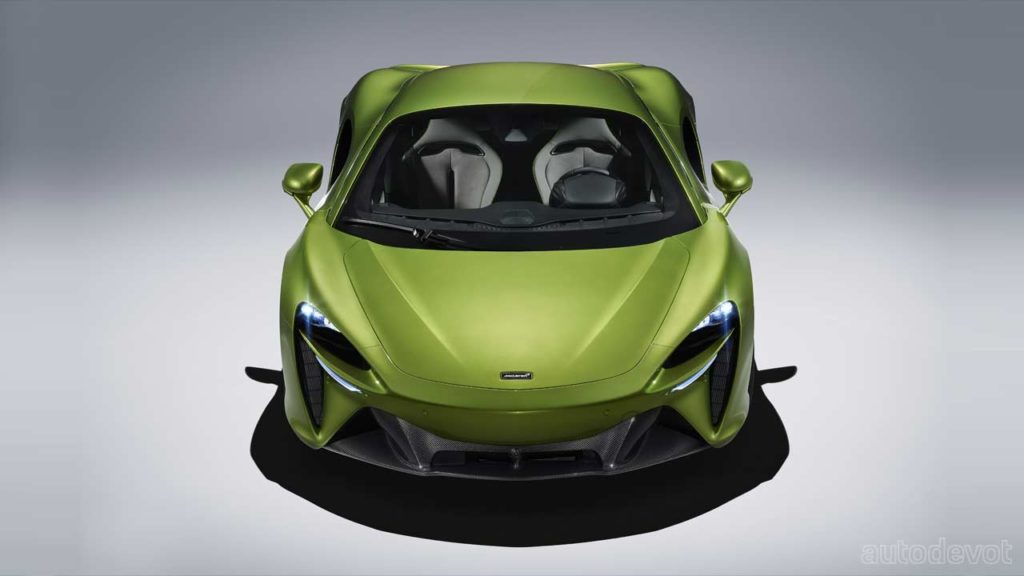 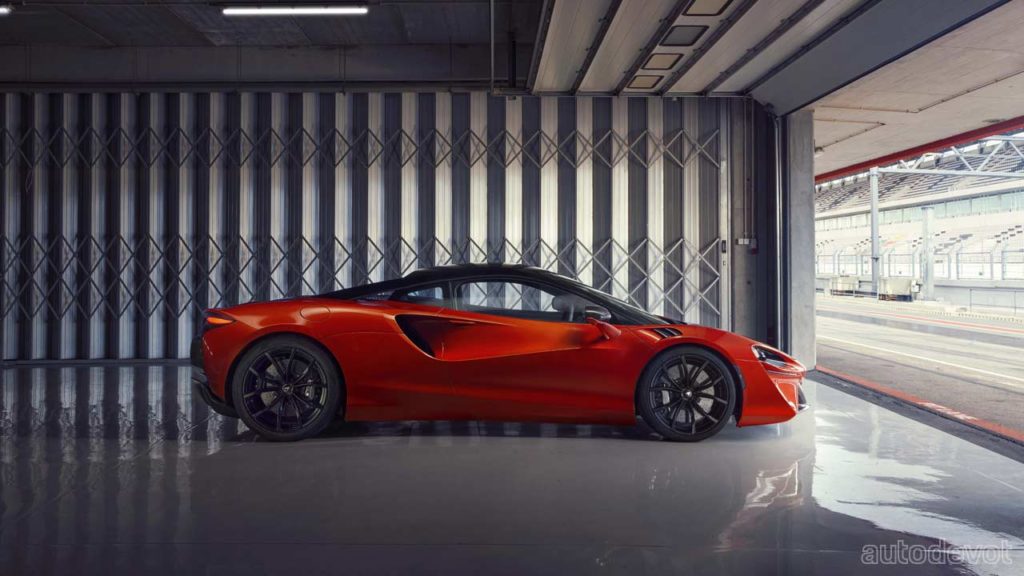 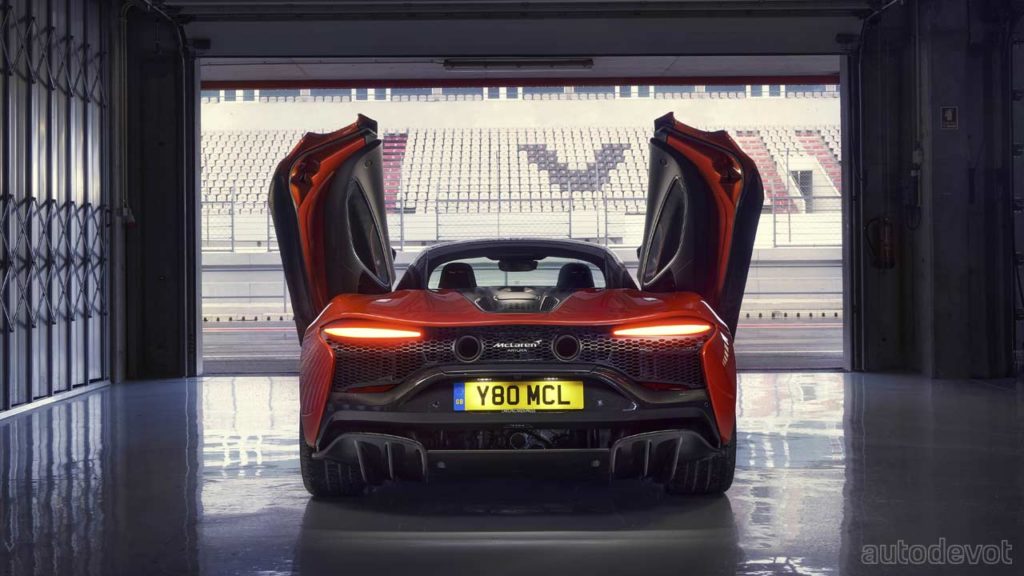 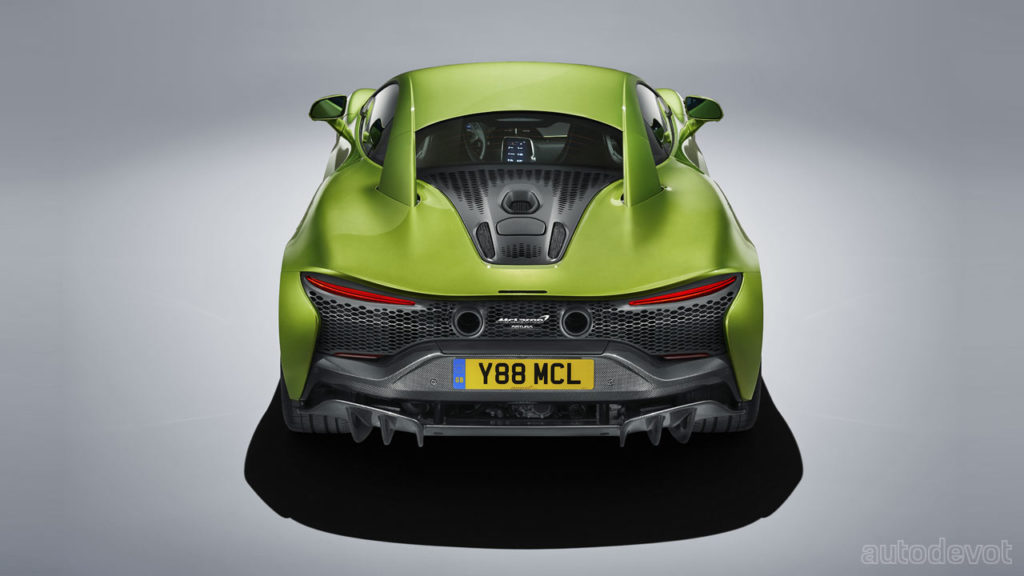 The Artura measures 4,539 mm long, 2,080 mm wide (with mirrors) and 1,193 mm tall. It has a wheelbase of 2,640 mm. Brakes are carbon ceramic discs measuring 390 mm at the front and 380 mm at the rear, gripped by forged aluminium calipers. Suspension duties are handled by aluminium wishbones at the front, while the rear is a new combination of an upper wishbone and lower multi-link setup. The car also gets the Proactive Damping Control system. 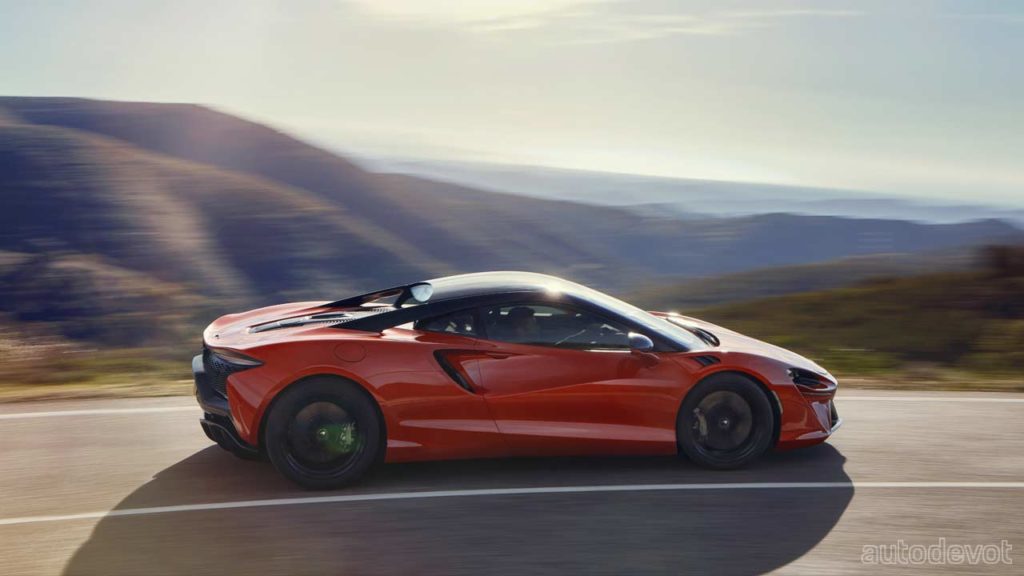 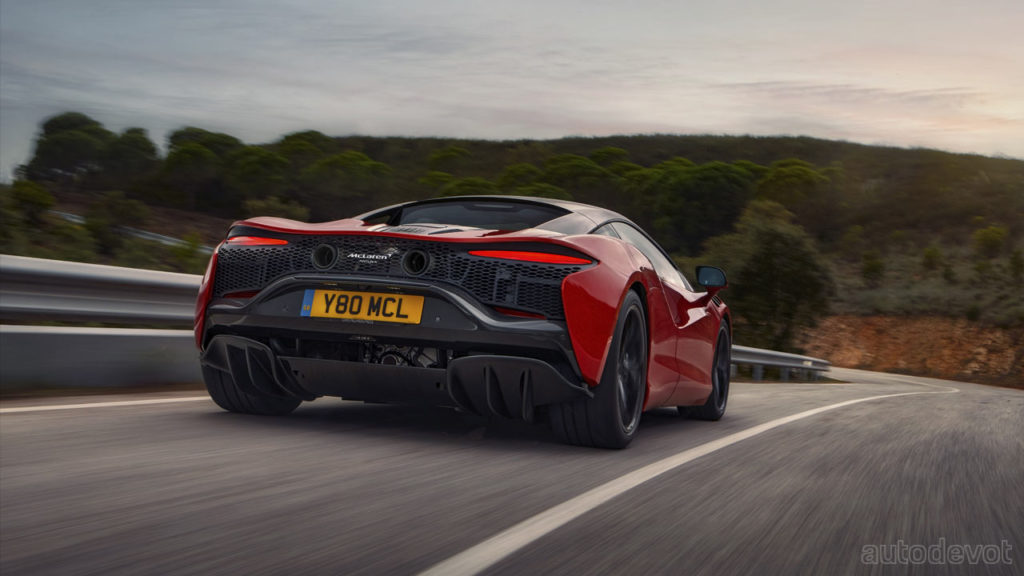 The Proactive Damping Control system uses inputs from sensors to ‘read’ the road rather than reacting to camera-based information. Feedback from four wheel accelerometers, three body accelerometers and two pressure sensors per damper – as well as multiple sensors that measure steering angle, vehicle speed, yaw rate and lateral acceleration – is processed in less than two milliseconds to ensure the vehicle state is optimized for outstanding levels of control.

The Artura is the first McLaren to have an electronically controlled differential (E-diff). Smaller and lighter than a mechanical locking differential, the E-diff is integrated into a new 8-speed transmission. 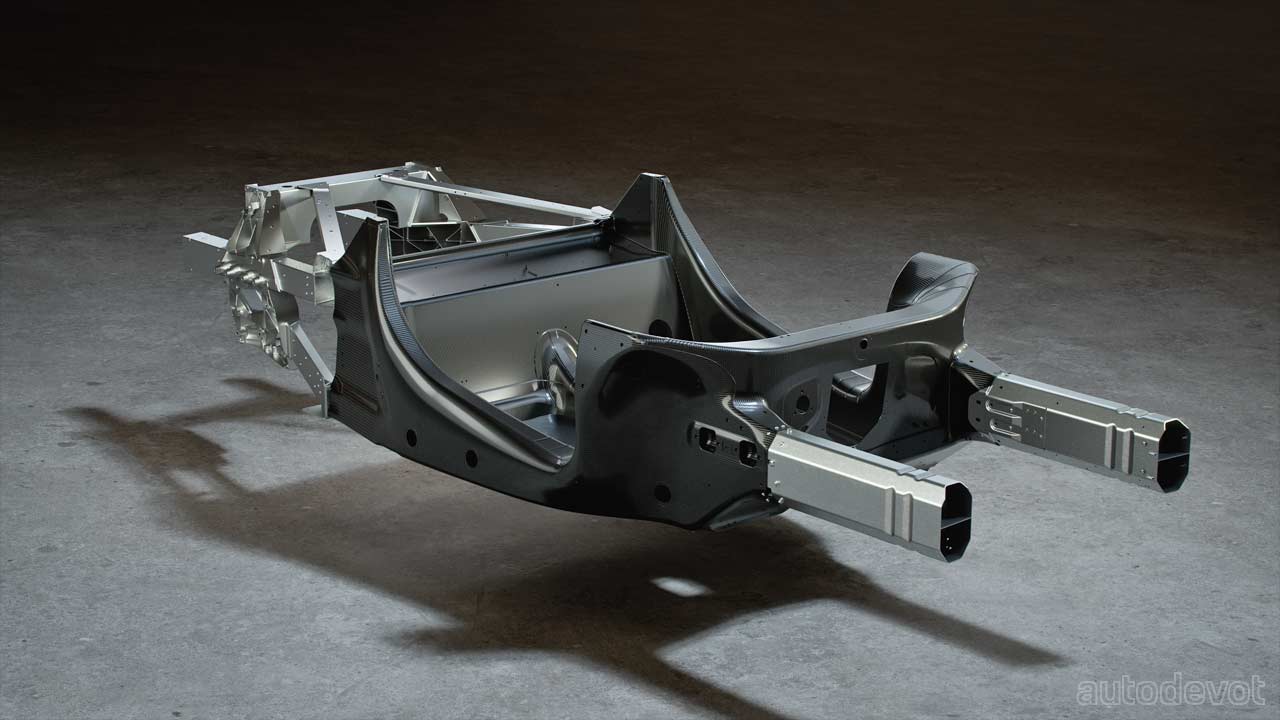 The new McLaren Carbon Lightweight Architecture (MCLA) monocoque offers a safety cell for the battery pack and is capable of bearing more crash loads. McLaren says that it weighs just 82 kg (180.8 lbs) including the battery compartment, aero surfaces, B-pillars and door-hinge fixings, contributing to the low overall weight of the Artura, despite its 130 kg (286.6 lbs) of hybrid components. The overall kerb weight of the car (fluids + 90% fuel) is claimed to be 1,498 kg (3,302.5 lbs). 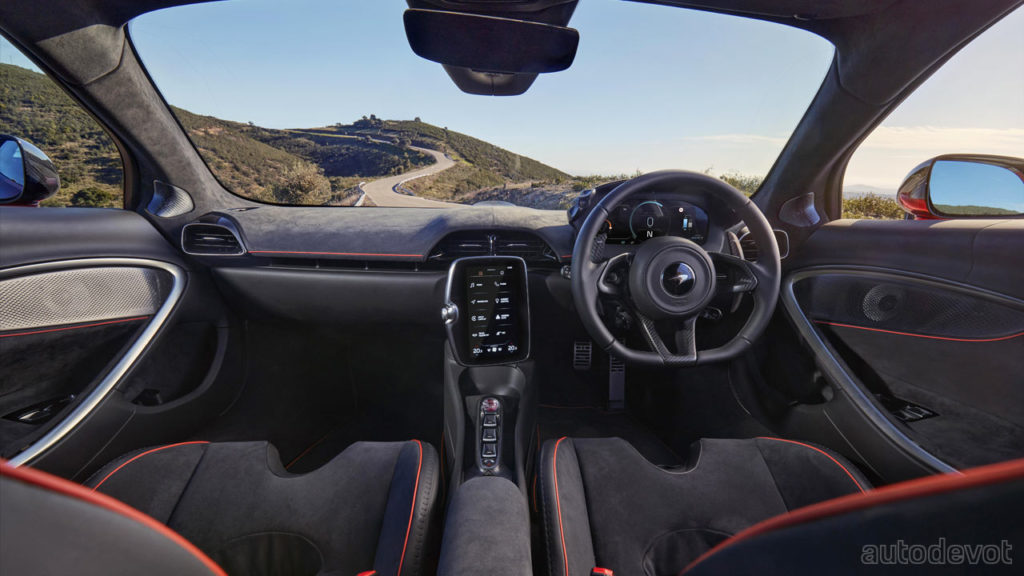 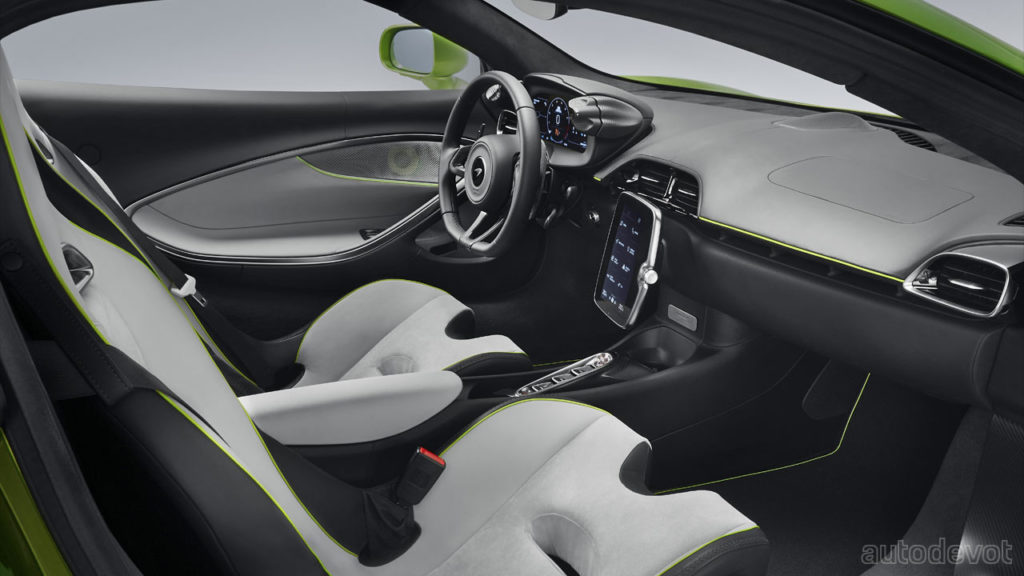 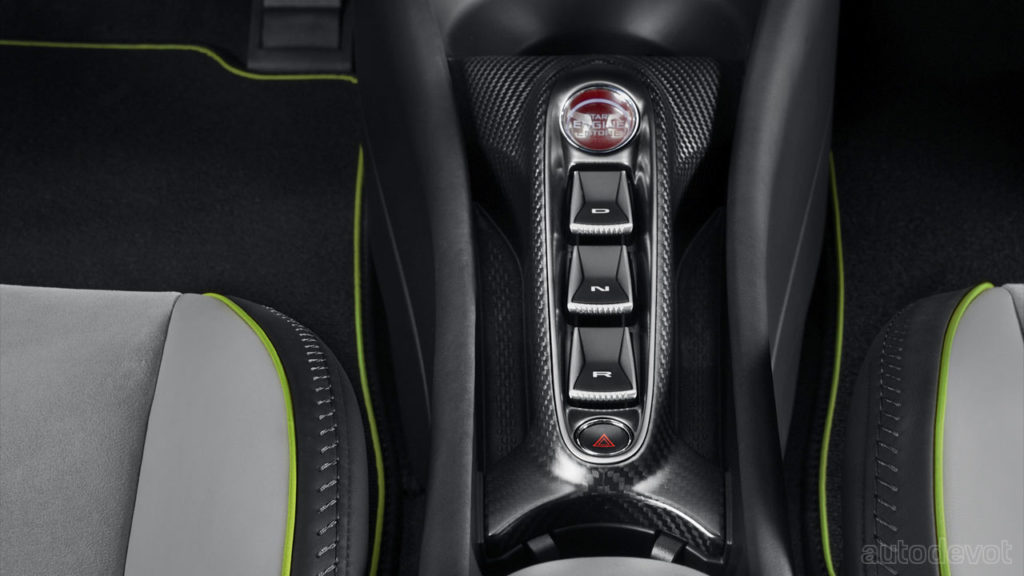 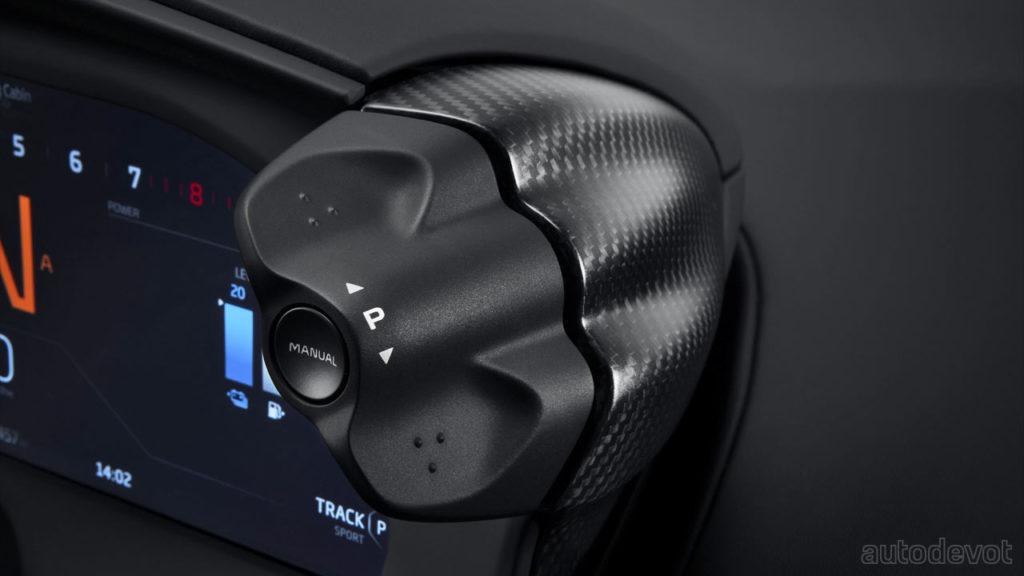 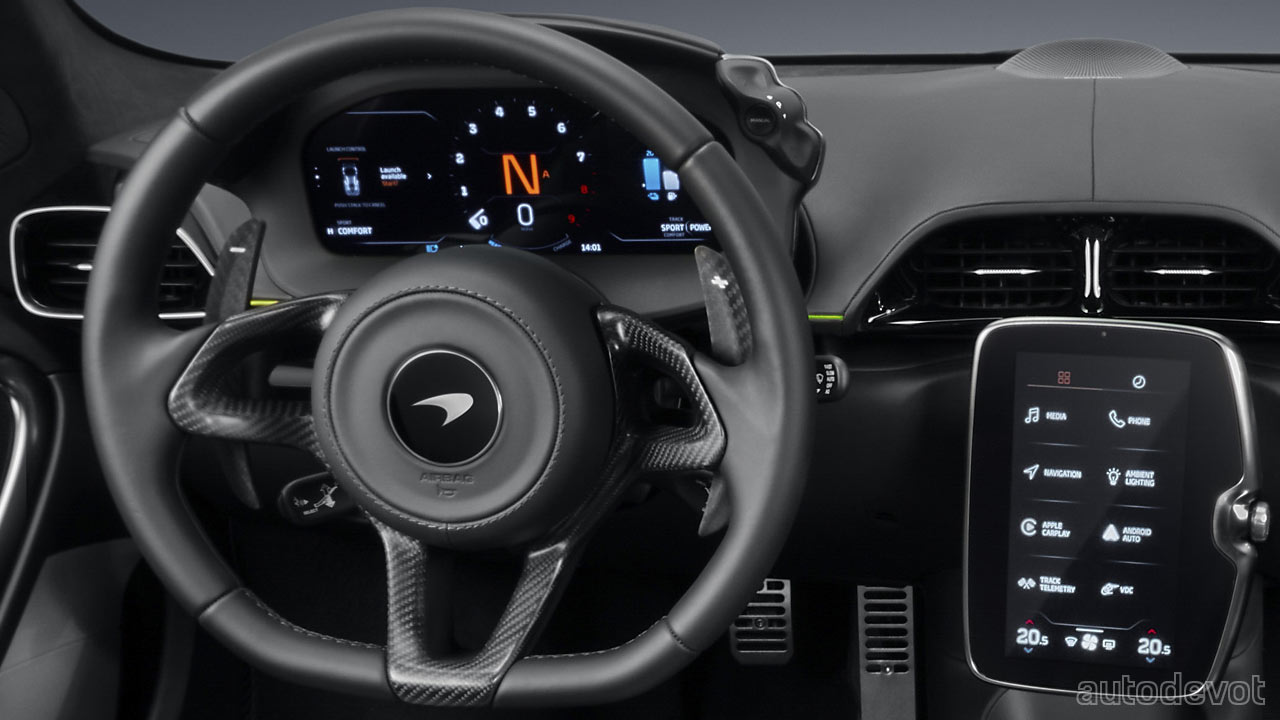 The cabin looks slightly different, especially the design of the air vents which are rectangular-ish as opposed to circular ones in the other McLarens. The rest of them is a familiar affair, including the 8-inch portrait-style central touchscreen, the stacked DNR buttons/toggles on the centre console and the steering wheel. Other features include Clubsport seats finished in Alcantara, steering column-mounted Digital Instrument Cluster, dual-zone climate control, and a 5-speaker audio system. Options include comfort seats, 12-speaker Bowers & Wilkins audio system, Vehicle Lift system, soft-close doors, and Homelink for remote opening of up to three electric garage doors or house gates. 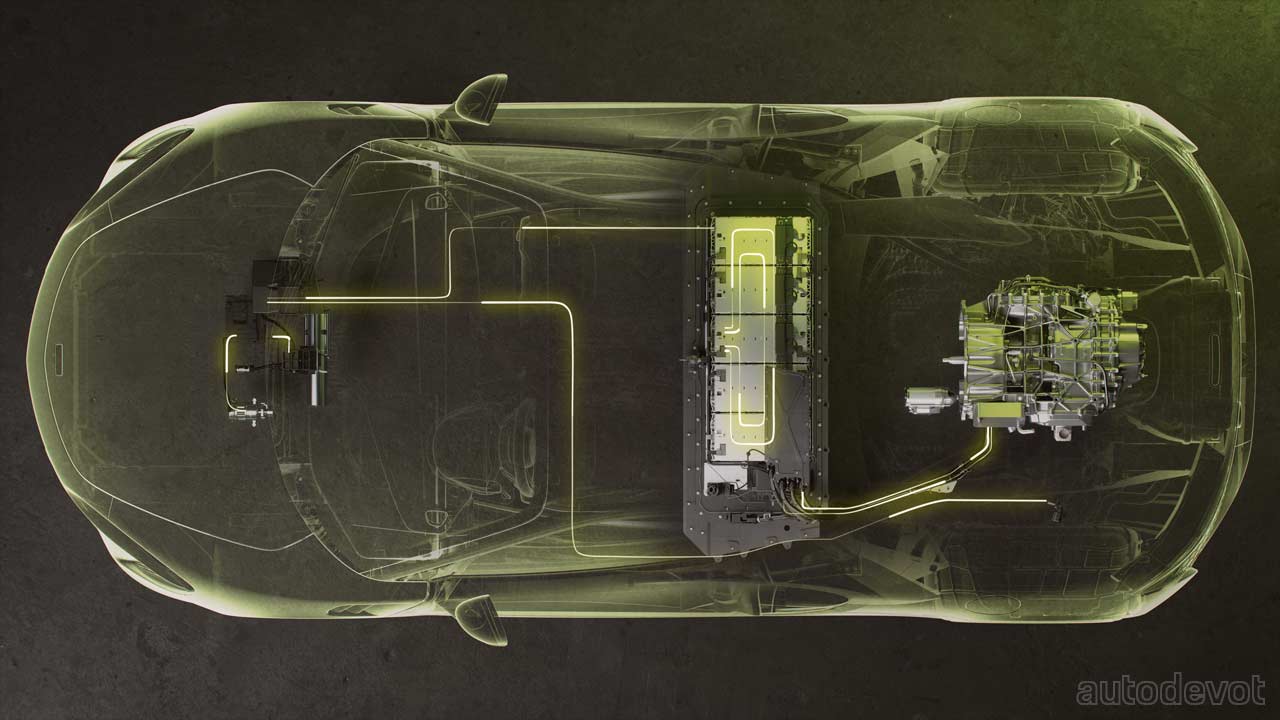 Another first is a new electric heating, ventilation and air-conditioning (eHVAC) system, which can also work without the assistance of the internal combustion engine. The compact unit, incorporating an electric compressor, condenser and evaporator, is located in the front of the car for better weight distribution, without the need for “pipework” to run forward from the engine.

Moving on to the business end of the story then, the hybrid powertrain is a combination of a 3.0-litre (2,993 cc) twin-turbo V6 petrol engine (with turbos in the “V”) and a 95 hp electric motor (axial flux) integrated within the new 8-speed automatic transmission. The gearbox doesn’t have a mechanical reverse gear, which means the e-motor takes care of reversing the vehicle. The combined output figures are 500 kW (680 metric hp) and 720 Nm (531 lb-ft) of torque. 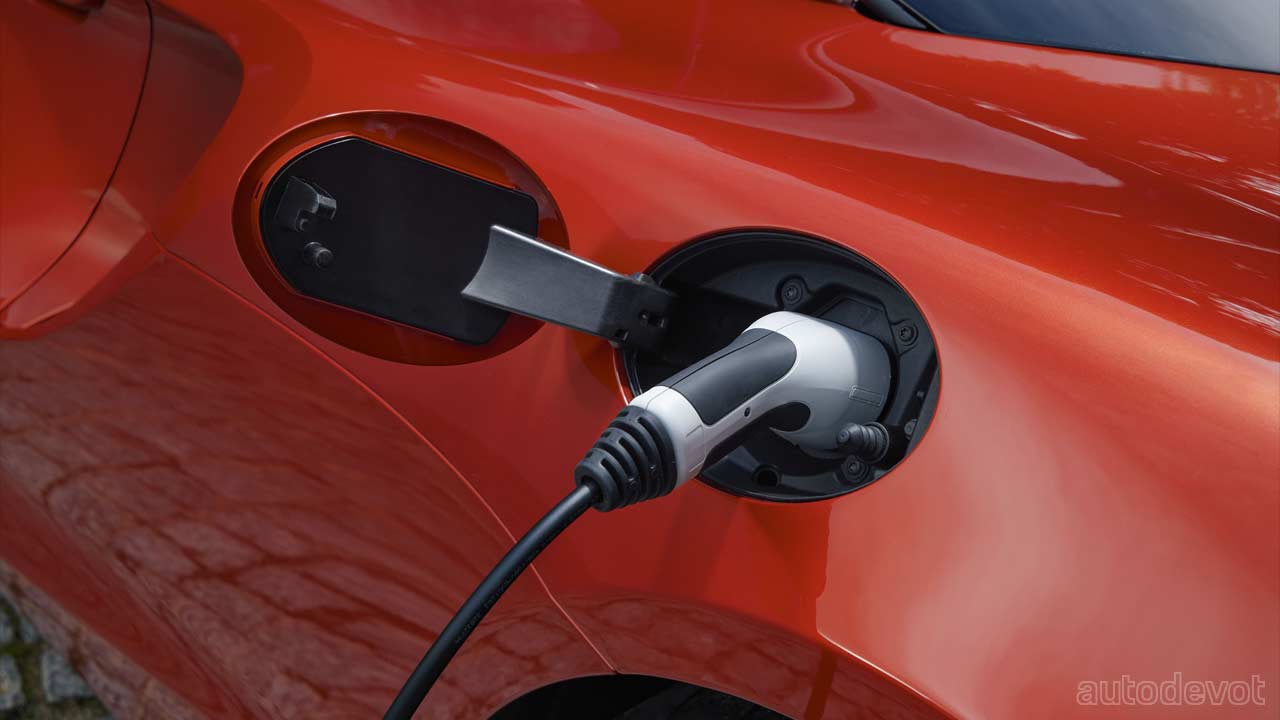 The Artura offers four modes: E-mode, Comfort, Sport and Track. The E-mode is the default for silent start-up and fully-electric driving. In Comfort mode, the V6 runs in tandem with the e-motor, prioritizing fuel saving. In Sport mode, the e-motor provides torque infill at lower revs, while the V6 targets maximum performance. The Track mode delivers the same blend of hybridized power, with transmission software delivering faster shifts. 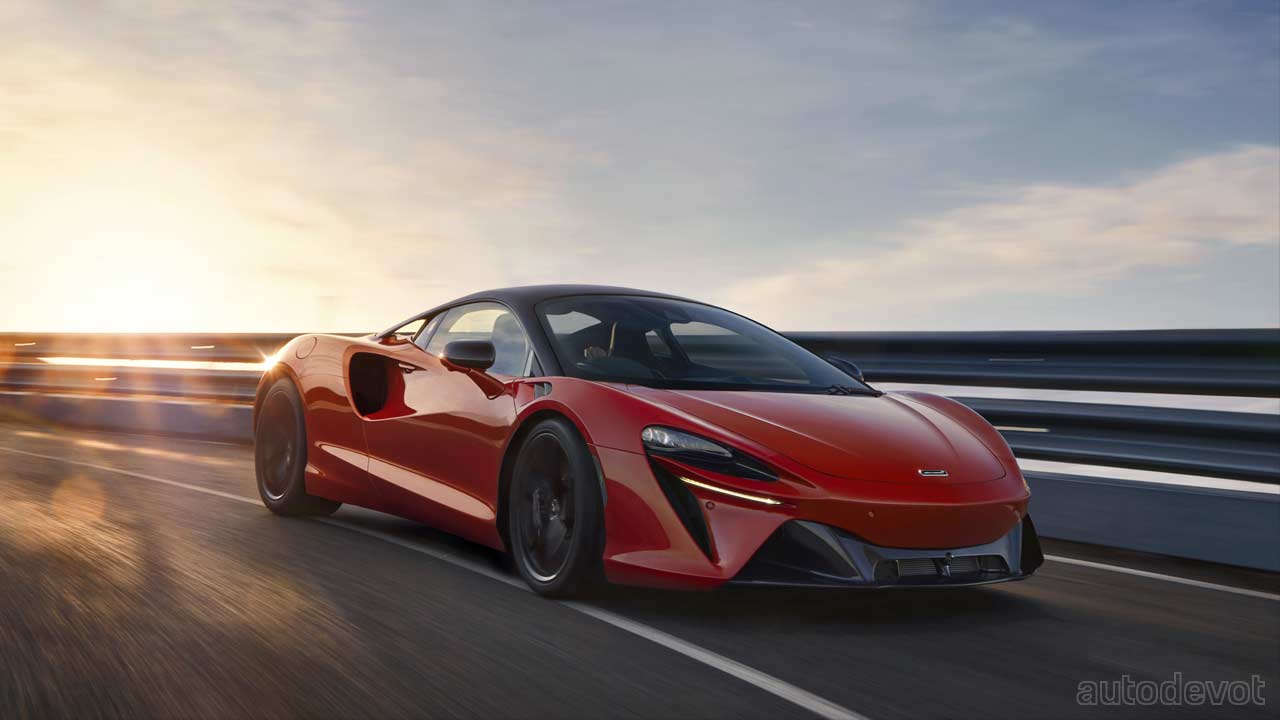