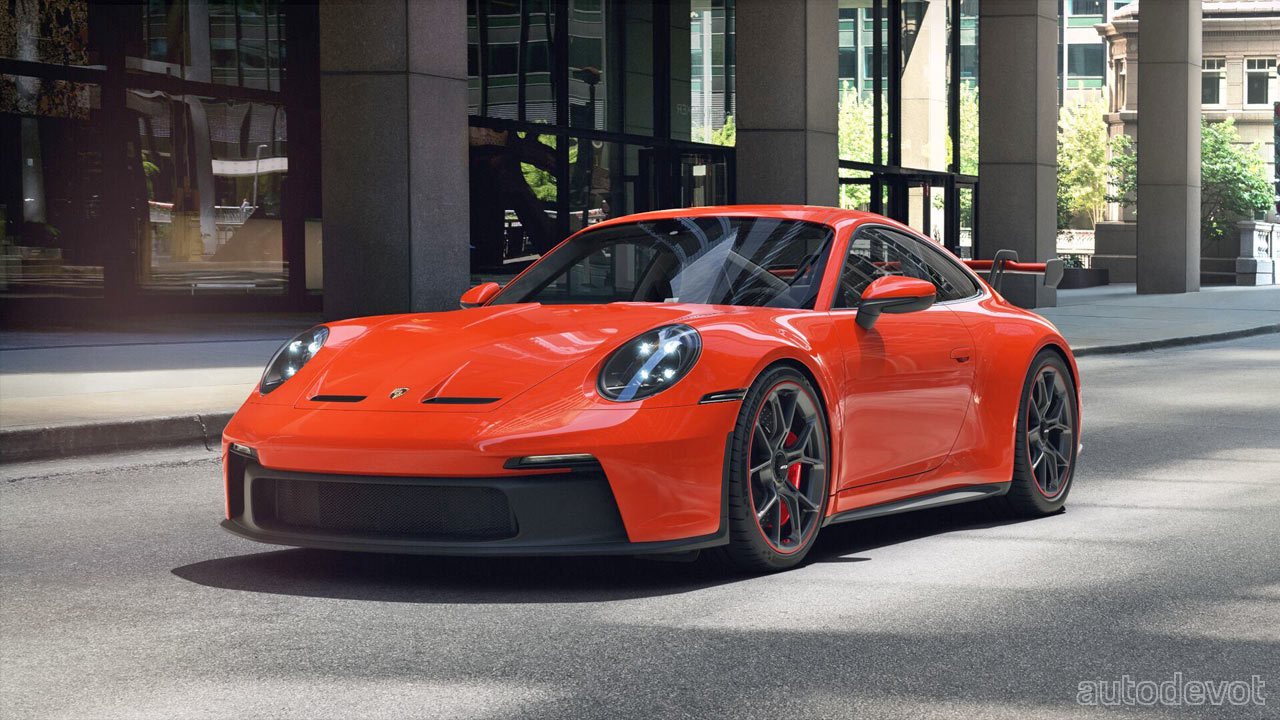 A road-going sports car with a naturally aspirated engine and a manual gearbox in 2021? Get the heck outta here! 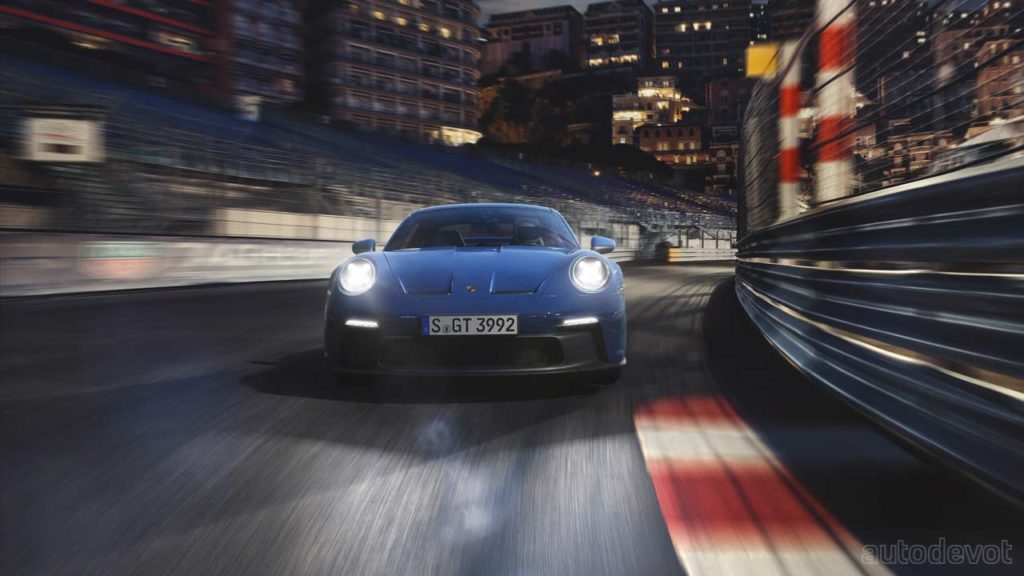 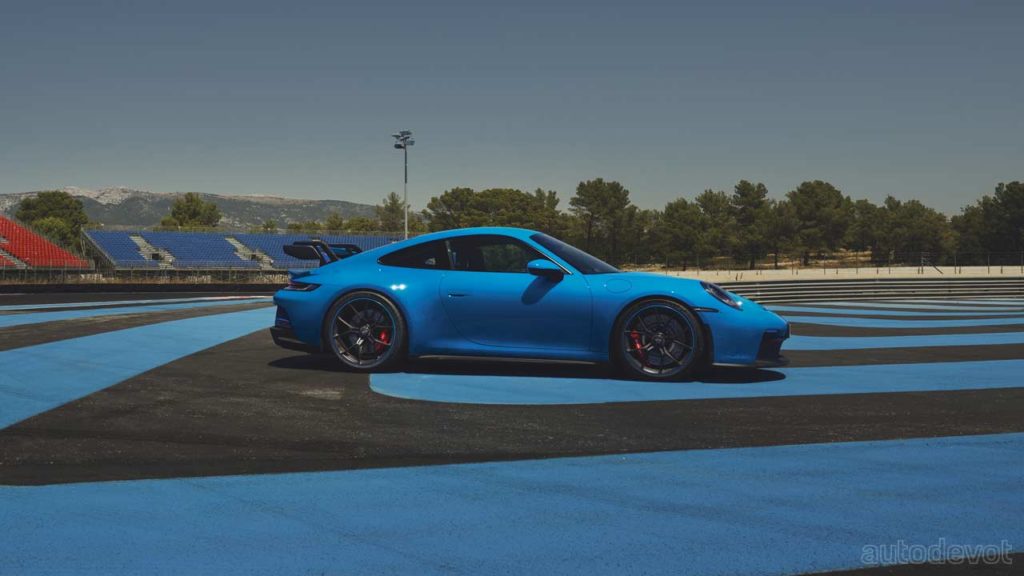 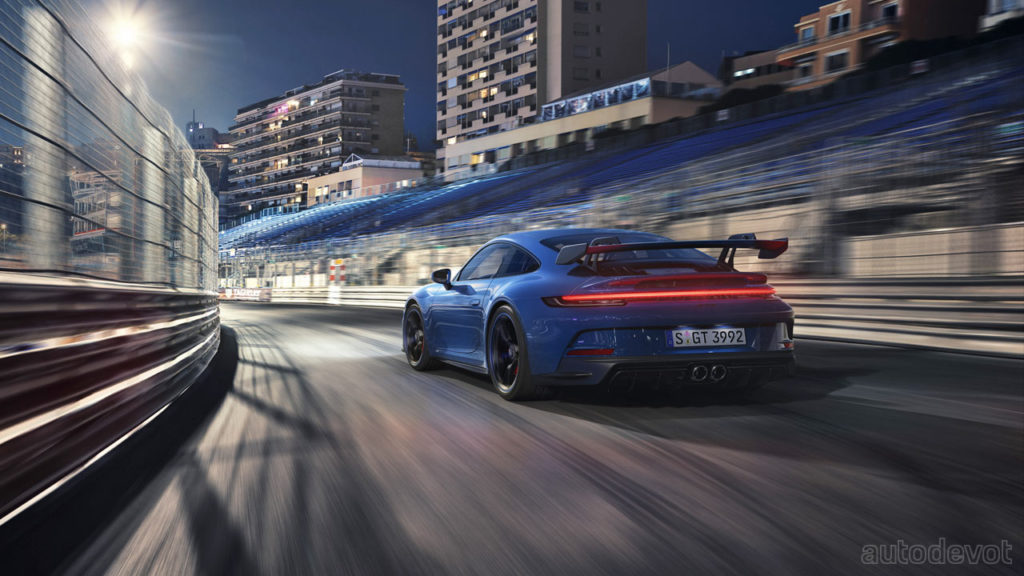 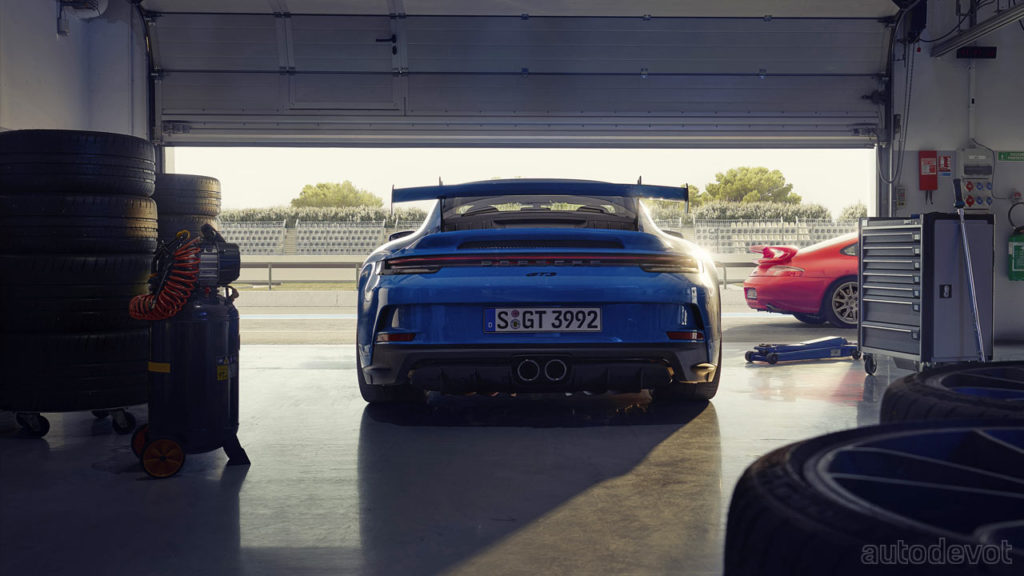 As for the design, the new 911 GT3 Cup car already showed how the road version would look in December 2020 itself. Compared to the regular 911, the GT3 gets bonnet outlets, a manually adjustable swan neck rear wing, and a serious-looking rear diffuser. As before, the tailpipes are concentrated in the centre. The front bumper is almost identical to that of the GT3 Cup car. Overall, the new GT3 looks a bit more aggressive compared to the previous model. 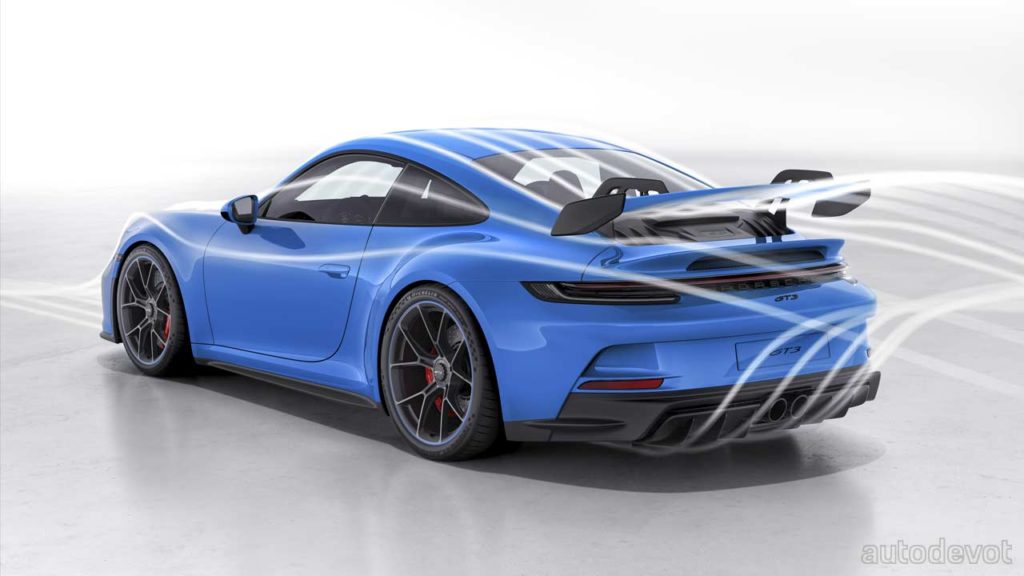 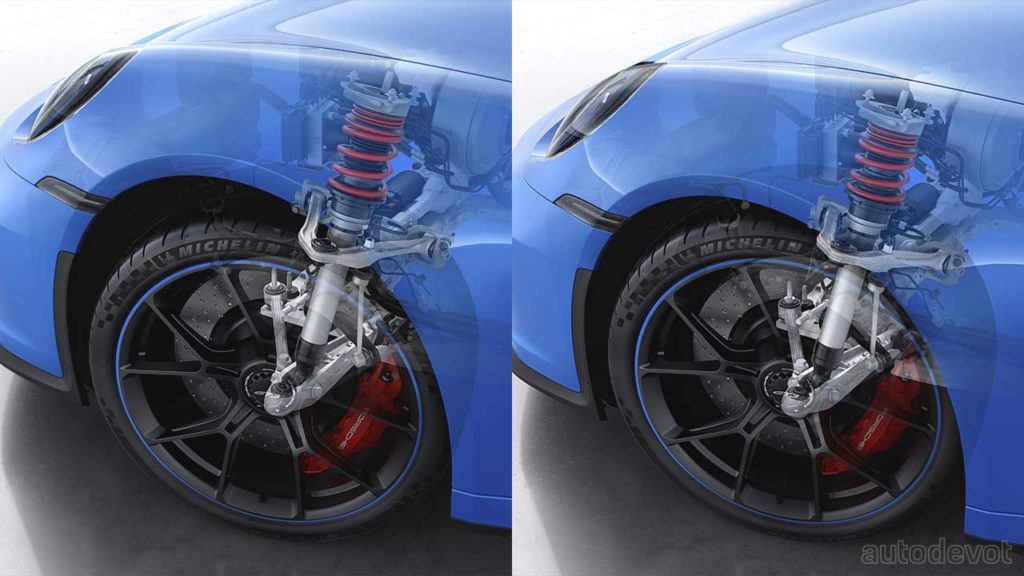 The rear diffuser is claimed to generate four times as much downforce as its predecessor and the overall downforce is claimed to be approximately 50% more than its predecessor, thanks to the swan-neck wing. In the performance position, the downforce can increase by as much as 150% at 200 km/h (124 mph), Porsche said. Also, notice that the front axle has double wishbone suspension as opposed to MacPherson struts in the regular models. Porsche Active Suspension Management (PASM) comes standard. 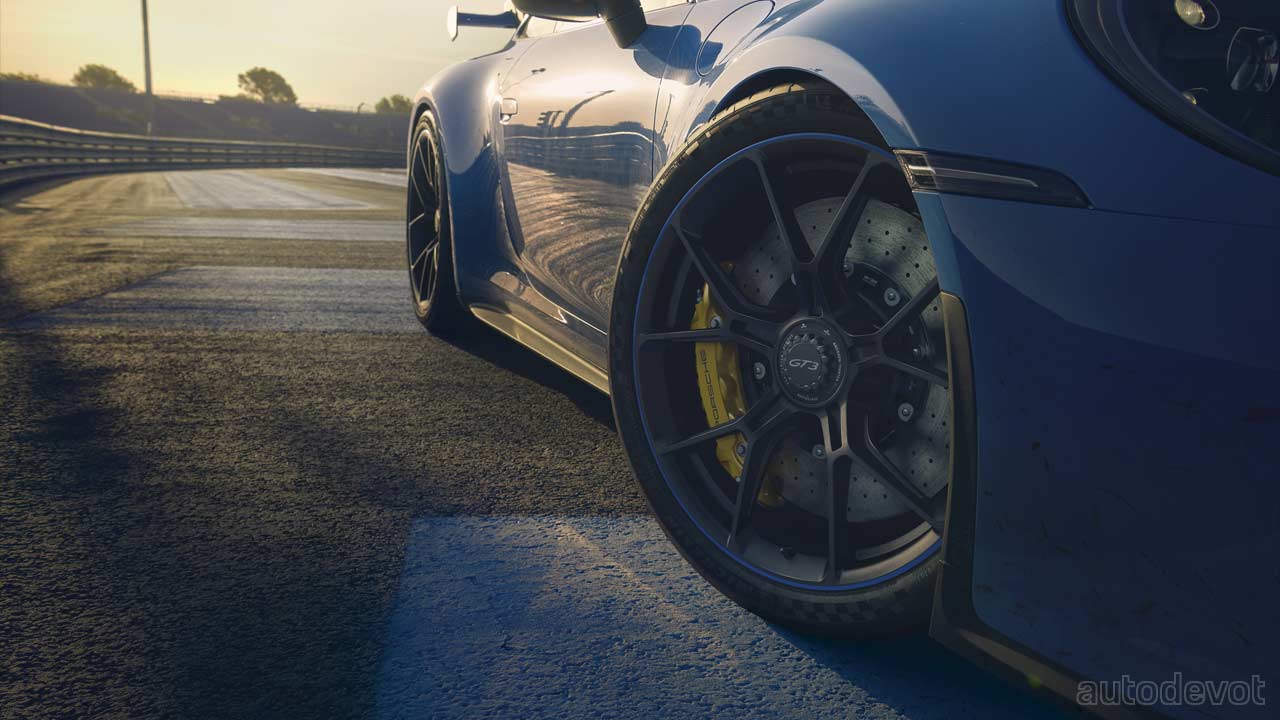 Braking duties are handled by larger 408 mm discs at the front, up by 28 mm, which are claimed to be 17% lighter compared to the ones on the last GT3. Rear discs measure 380 mm. The light-alloy wheels measure 20-inch at the front and 21-inch at the rear, shod with high-performance sports tyres measuring 255/35 at the front and 315/30 at the rear. The GT3 also gets the Smart Lift memory function for front-axle lift; the technology was introduced in the Taycan. Rear-wheel steering comes standard. 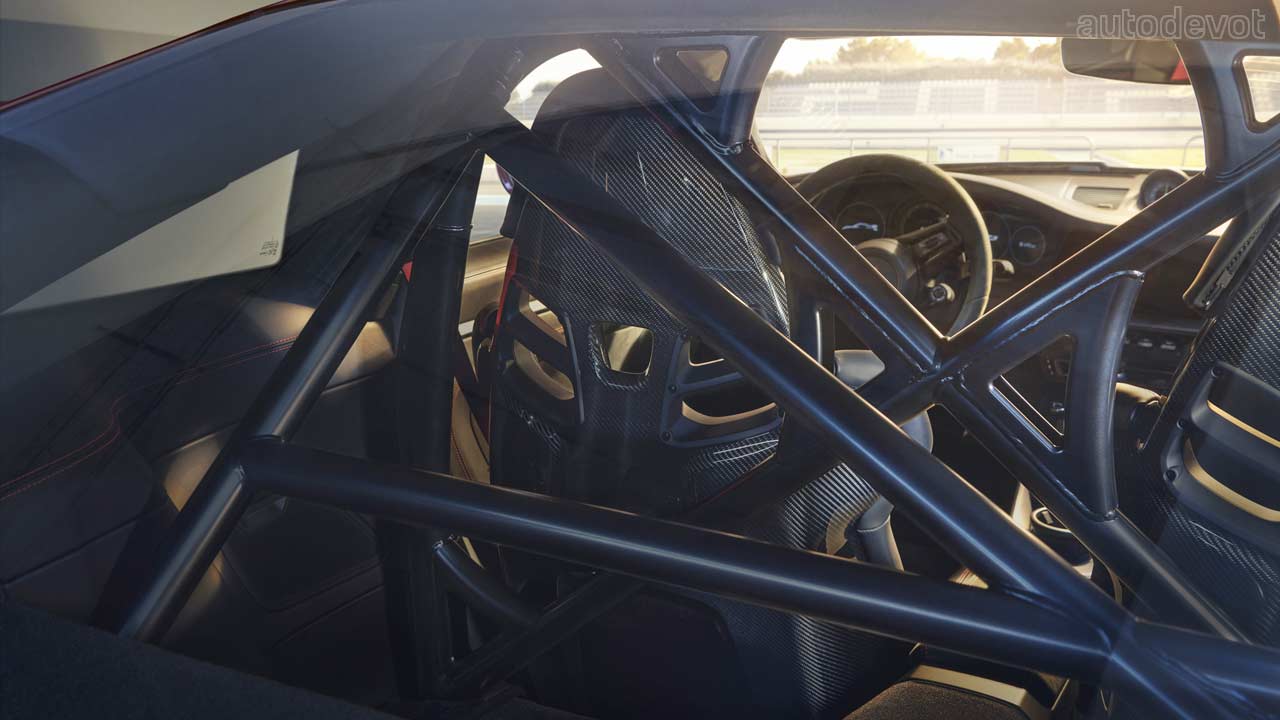 A roll cage is part of the no-cost Clubsport package, which also includes a six-point harness on the driver’s side, a motorsport-grade fire extinguisher, and a battery disconnect switch.

While the construction is mostly of aluminium and steel, many components are made of carbon fibre reinforced plastic (CFRP) including the bonnet, mirror caps and the rear wing. The roof is also available in CFRP on request. The glass used for the windows is lightweight too. The starter battery is of LiFePO4 (lithium iron phosphate) and weighs 10 kg (22 lbs) less than that in the previous 911 GT3. Also, the lightweight sports exhaust system is claimed to weigh less than the one fitted to the previous GT3 despite having two gasoline particulate filters. Overall, the manual variant’s kerb weight is 1,418 kg (3,126 lbs) while the PDK variant weighs 17 kg (37.5 lbs) more. Compared to the Turbo S (PDK), the manual GT3 weighs 222 kg (489.5 lbs) less. 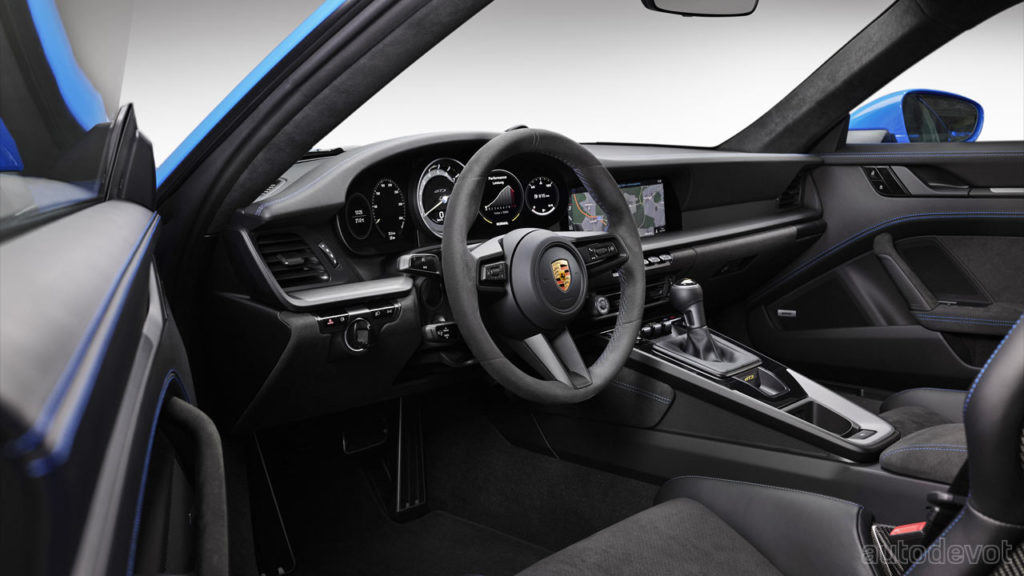 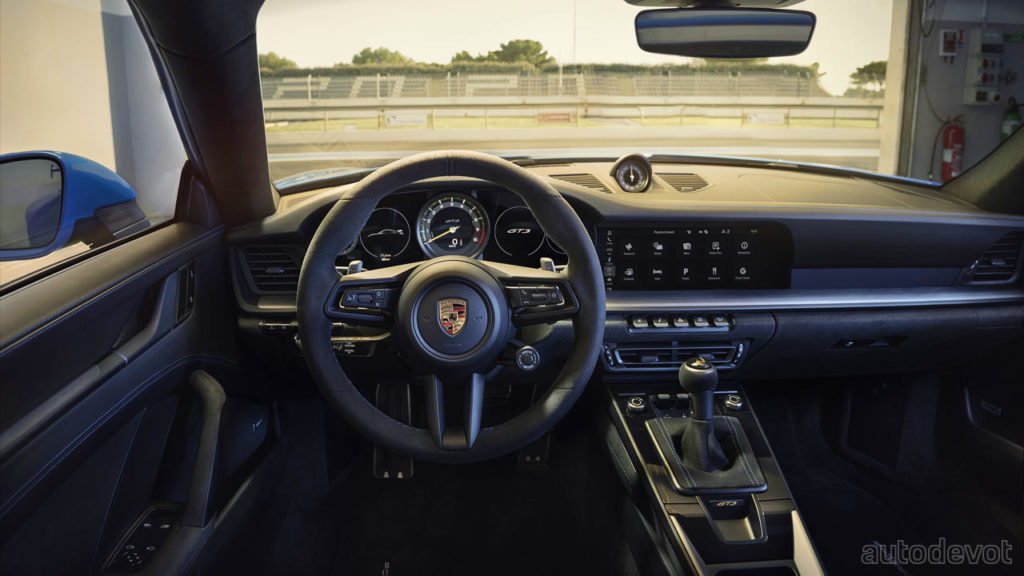 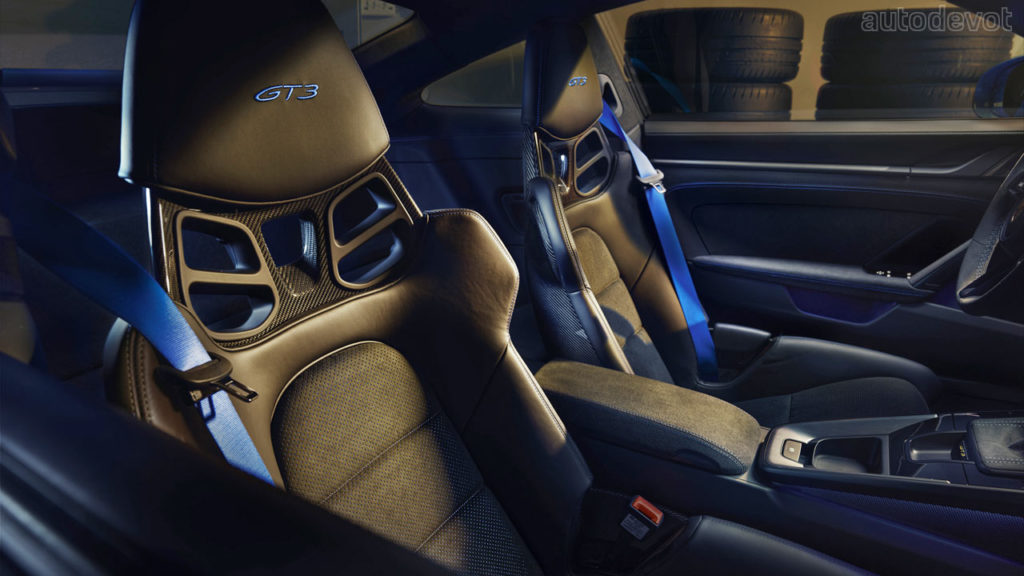 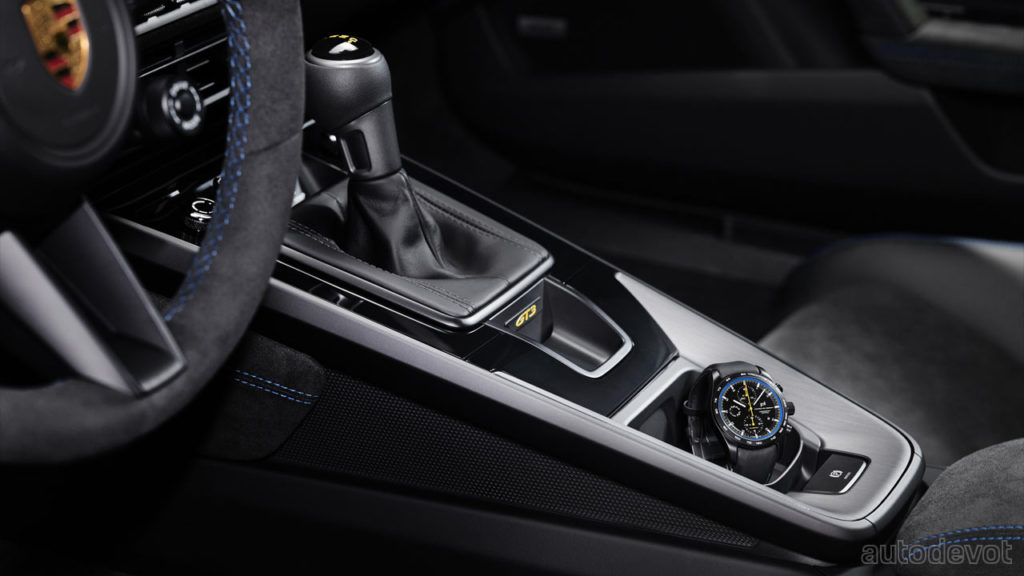 The cabin retains all the creature comforts such as the central touchscreen, air conditioning and so on. Details such as the rev counter dials, Sport Chrono stopwatch, seatbelts and trim strips can be had in the body colour or any other desired colour. Buyers can also go for a matching 911 GT3 Chronograph watch. 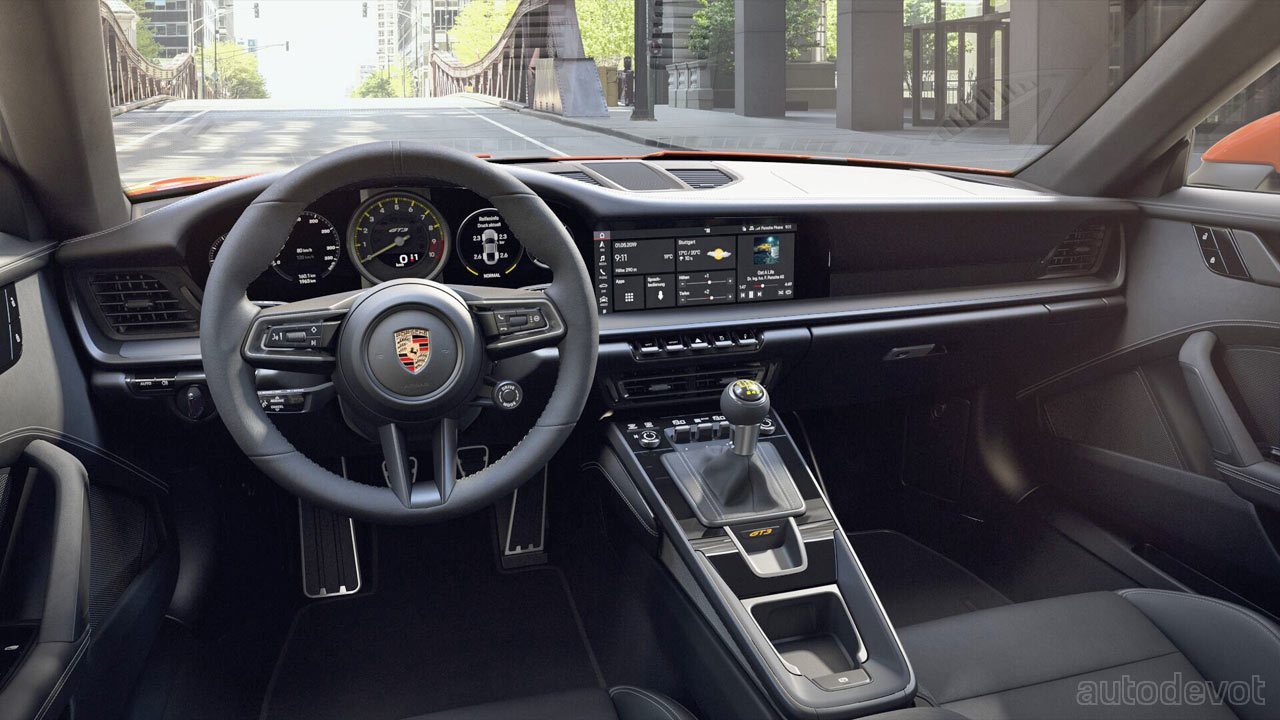 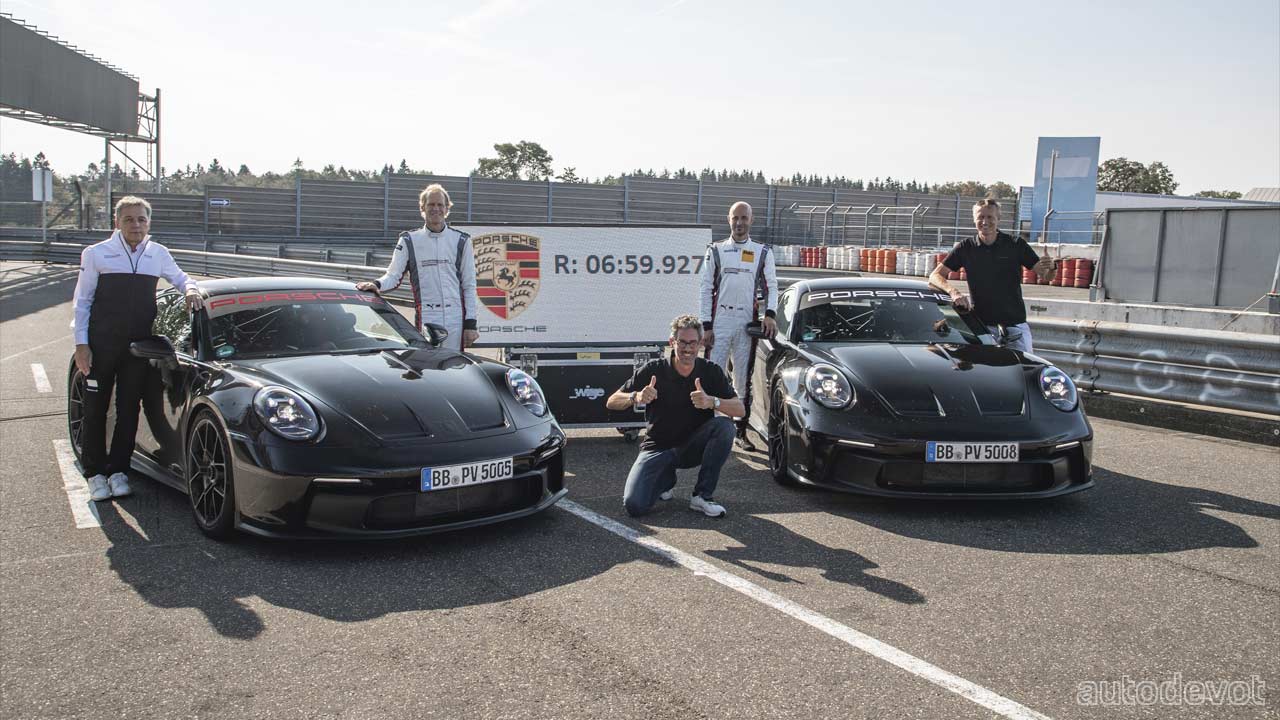 During its final testing, the new GT3 lapped the Nuerburgring-Nordschleife over 17 seconds quicker than its predecessor. Development driver Lars Kern took just 6:59.927 minutes for a full 20.8-km lap. The shorter 20.6-km track was gobbled up in 6:55.2 minutes. The car was wearing the optional Michelin Pilot Sport Cup 2 R tyres.