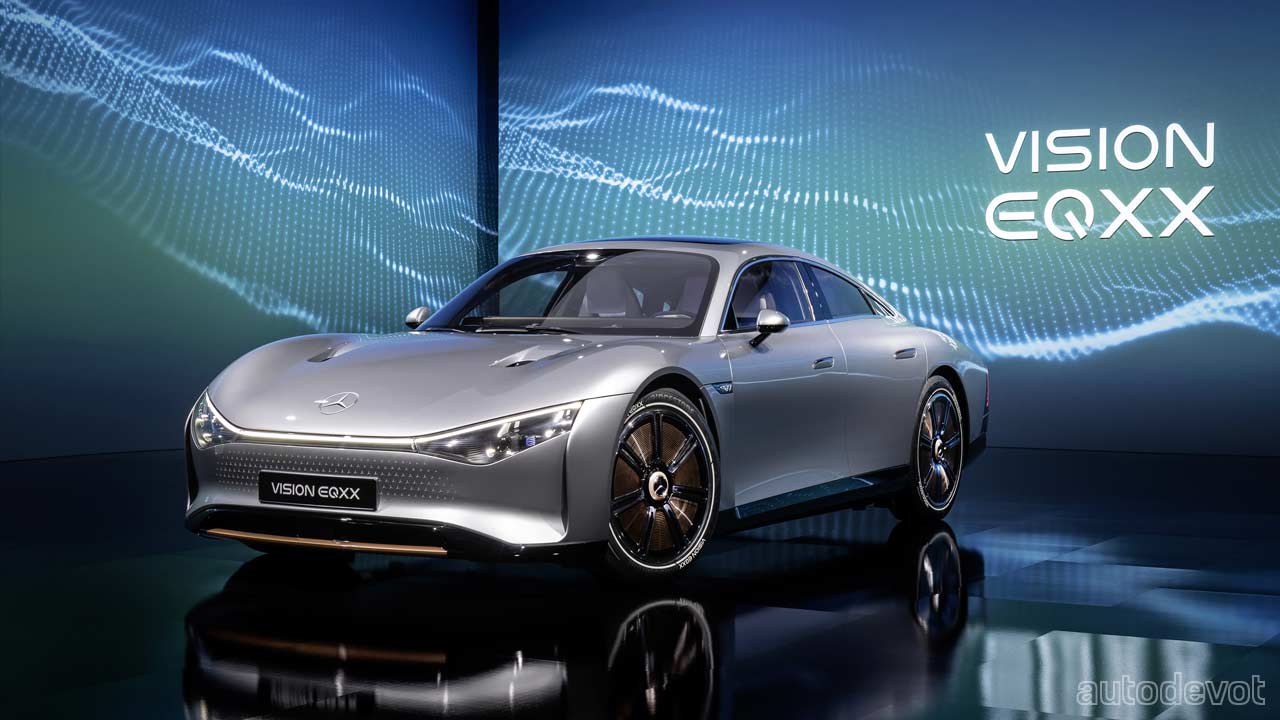 At first glance, you might think that this thing probably has over a 1,000 metric horsepower and enough torque to move the Schöckl mountain, but Mercedes-Benz isn’t chasing horsepower and torque figures with the Vision EQXX. The concept only has a single electric motor at the rear that offers just a li’l bit more than the EQA 250, but just when you think you’re disappointed, you’ll be amazed to learn how much thought went into making the vehicle as efficient as it is. 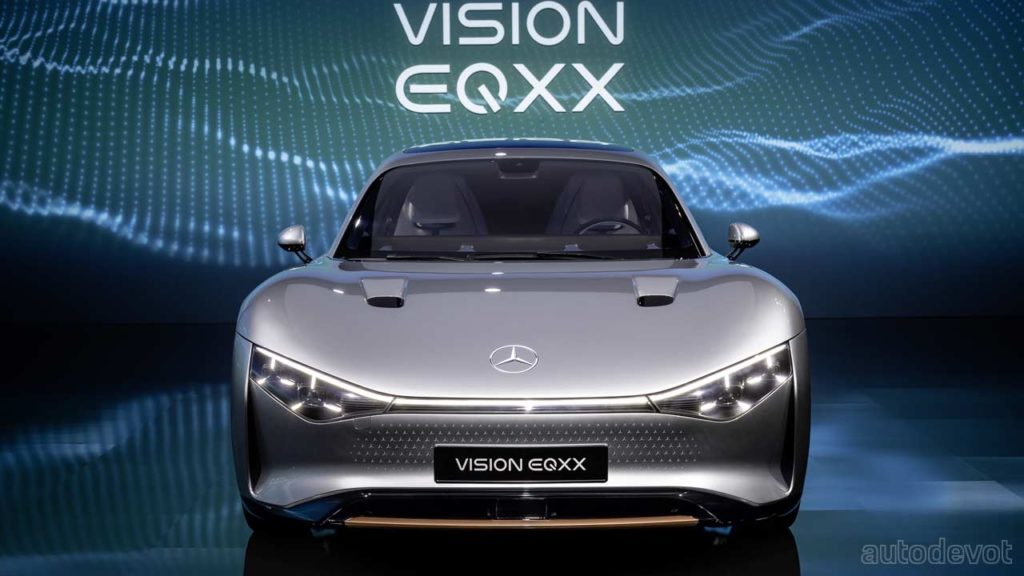 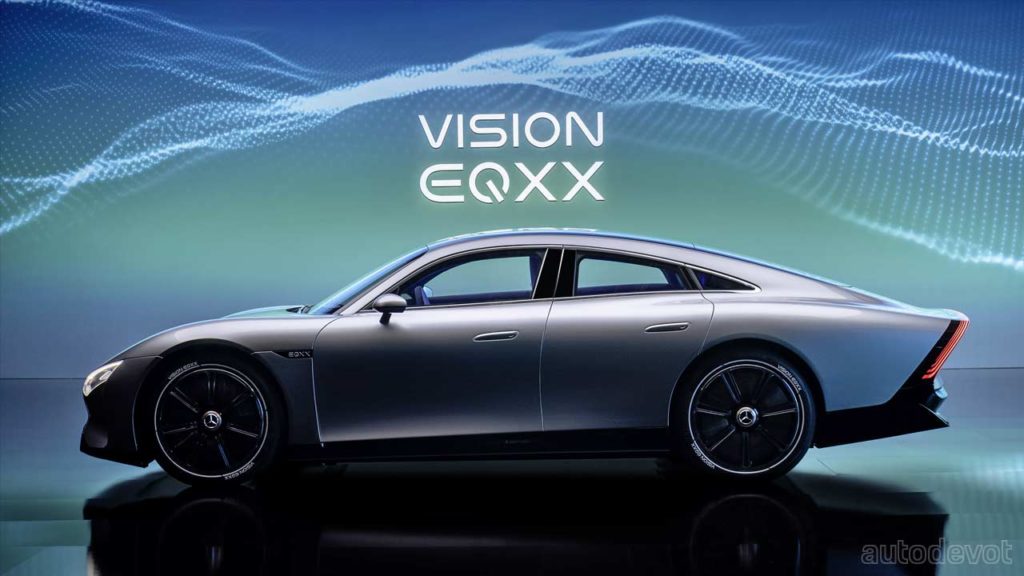 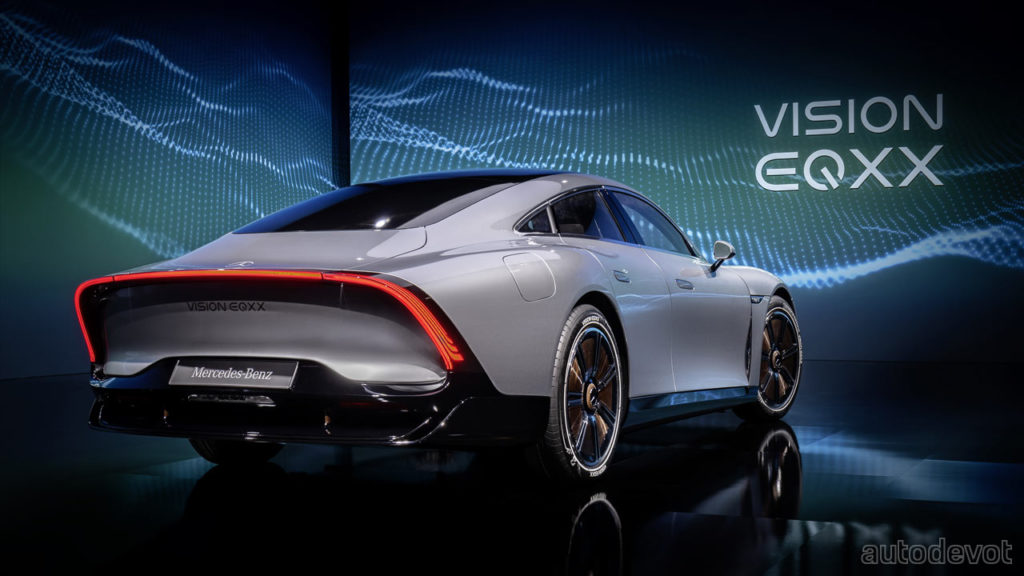 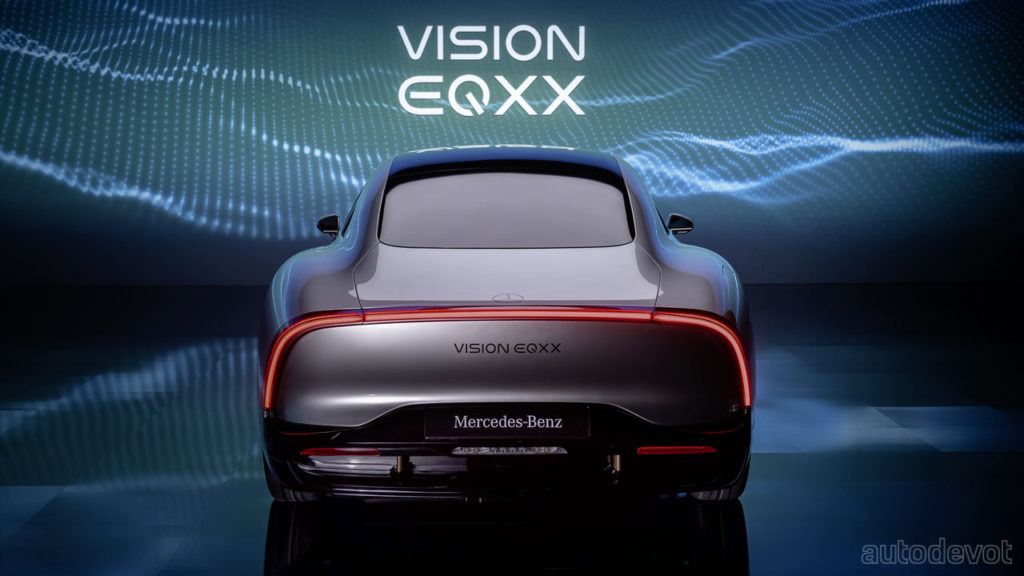 With that, let’s talk a li’l bit about the way it looks. Speaking of which, it looks like a mash-up of several cars including Porsche Taycan, Volkswagen XL1, McLaren Speedtail, Kia EV6, AMG ONE, and a hint of Aston Martin DB5 as well—but maybe that’s just me. According to Mercedes’ design team led by Gorden Wagener, the inspiration came from W125, 540K Streamliner, Concept C111, and also from the EQS. Notice how the running lights at the front mimick the three-pointed star, because there’s no traditional grille with a traditional logo. The Vision EQXX boasts a drag co-efficient of 0.17 Cd, and looking at the roofline that makes the rear headroom almost non-existent, it’s hard to disagree. But hopefully, the production model will have some usable rear headroom. 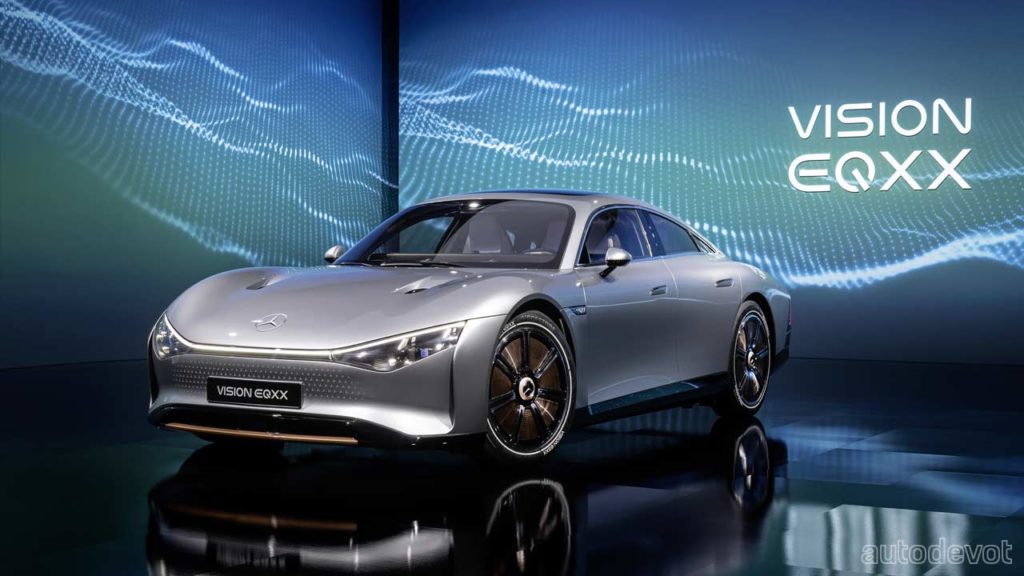 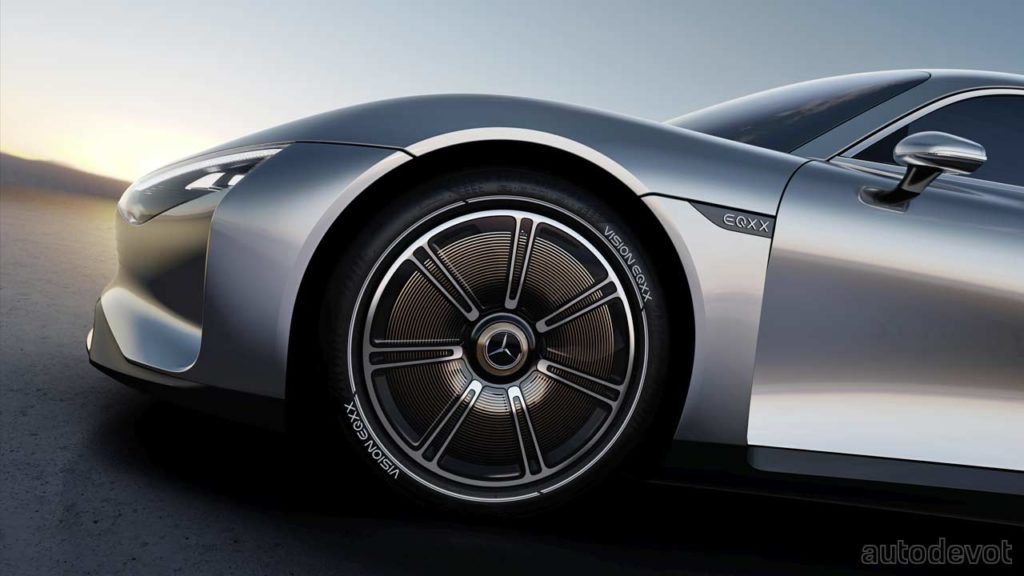 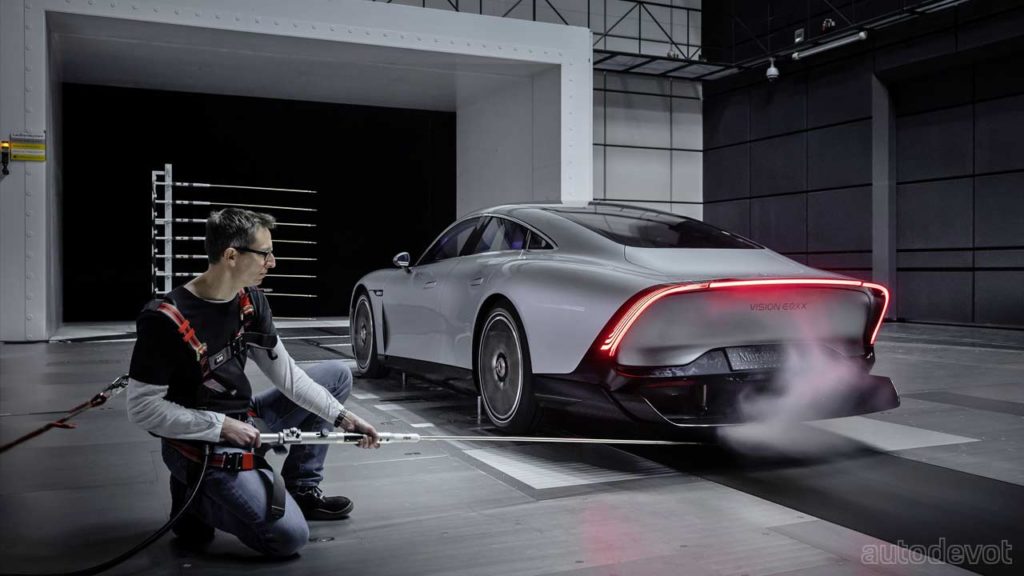 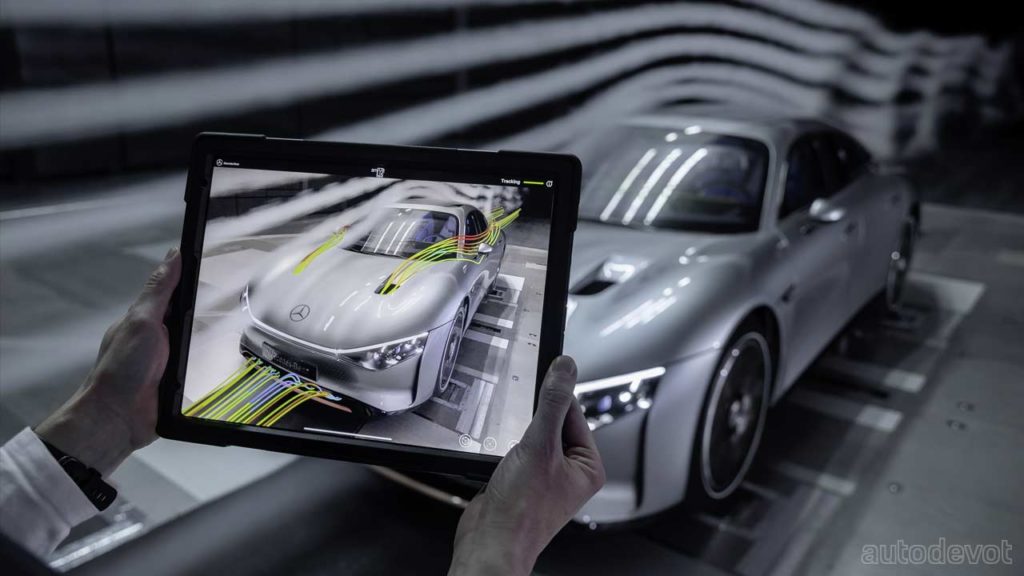 And of course, the 20‑inch, lightweight, forged-magnesium wheels with aero covers also contribute to that Cd figure. The tyre design features aerodynamically optimized sidewalls to match the aero covers. Active aero elements include a retractable rear diffuser that deploys only at higher speeds. The front-end features aero-shutters that open when things heat up.

The roof of the concept features ultra-thin solar panels—comprising 177 solar cells in total, which are claimed to add up to 25 km (15.5 mi) of range. The solar energy is stored in a lightweight lithium-iron-phosphate (LiFePO) battery, which supplies a climate blower, the lights, the infotainment system and other ancillaries. The solar system for the car was developed in collaboration with the Fraunhofer Institute for Solar Energy Systems ISE—Europe’s largest solar energy research institute. 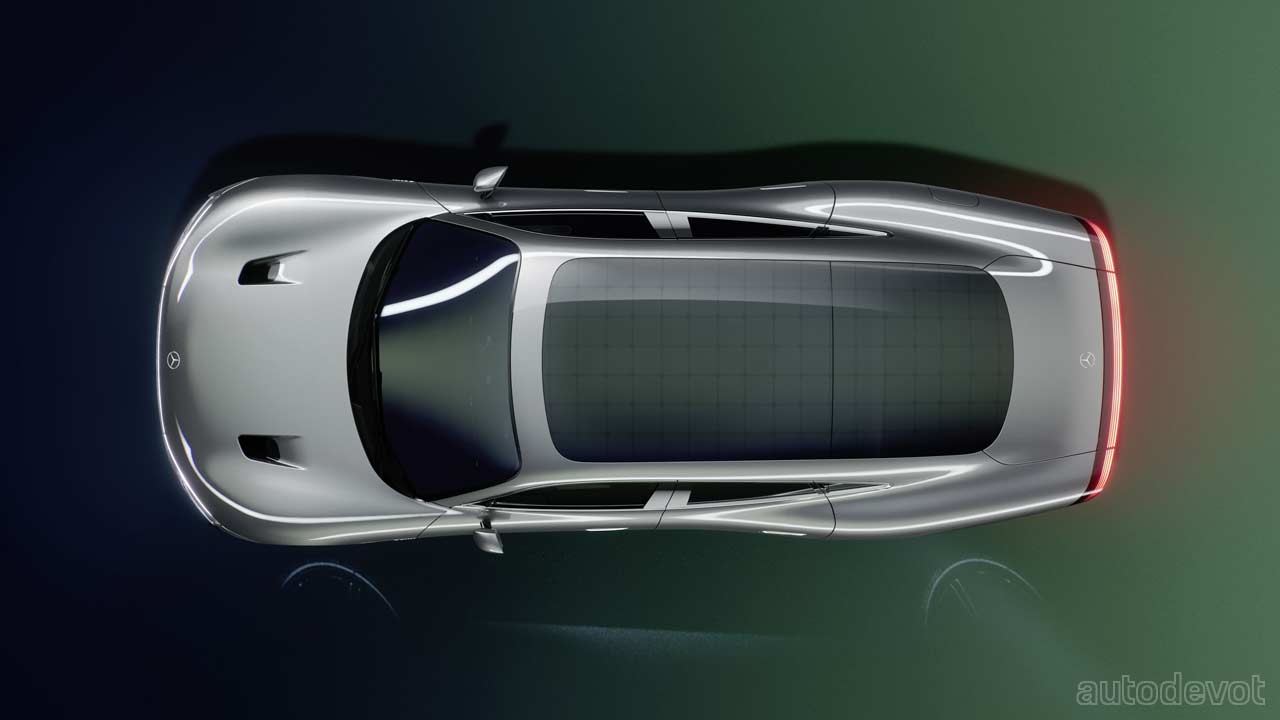 We also need to talk a li’l bit about its construction. Speaking of which, the body-in-white of the Vision EQXX is made of MS1500 ultra-high strength martensitic steel (100% scrap), which is said to offer excellent occupant protection in the event of a crash, while keeping weight to a minimum. The doors are a hybrid of CFRP and GFRP (carbon- and glass-fibre-reinforced plastics) with aluminium reinforcements. A new polyamide foam reinforces the lower edge of the door and optimizes energy absorption in a side-on collision. On the chassis, aluminium brake discs reduce the mass significantly compared with cast steel discs. Furthermore, advanced glass-fibre-reinforced plastic springs developed in partnership with Rheinmetall Automotive remove further weight compared with conventional coil springs. Advanced structural casting techniques have also contributed to weight savings. The concept’s gross vehicle weight is claimed to be ~1,750 kg (3,858 lbs) which is a pretty good number for a BEV. 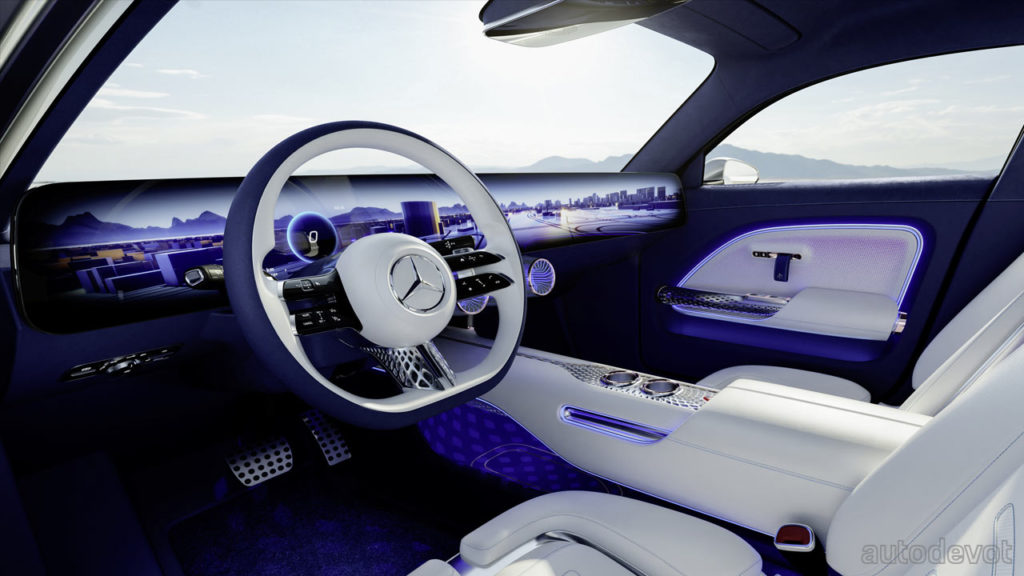 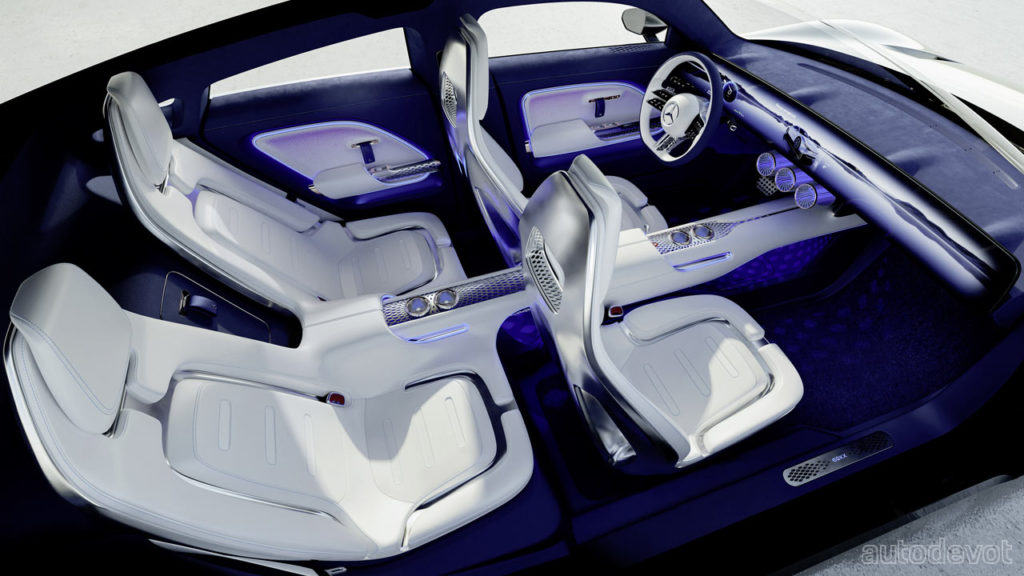 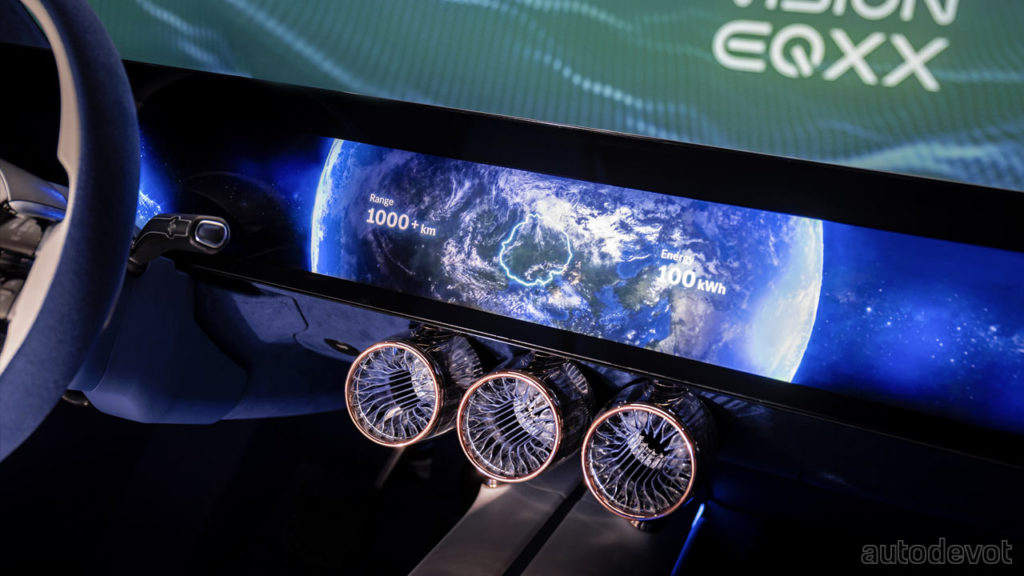 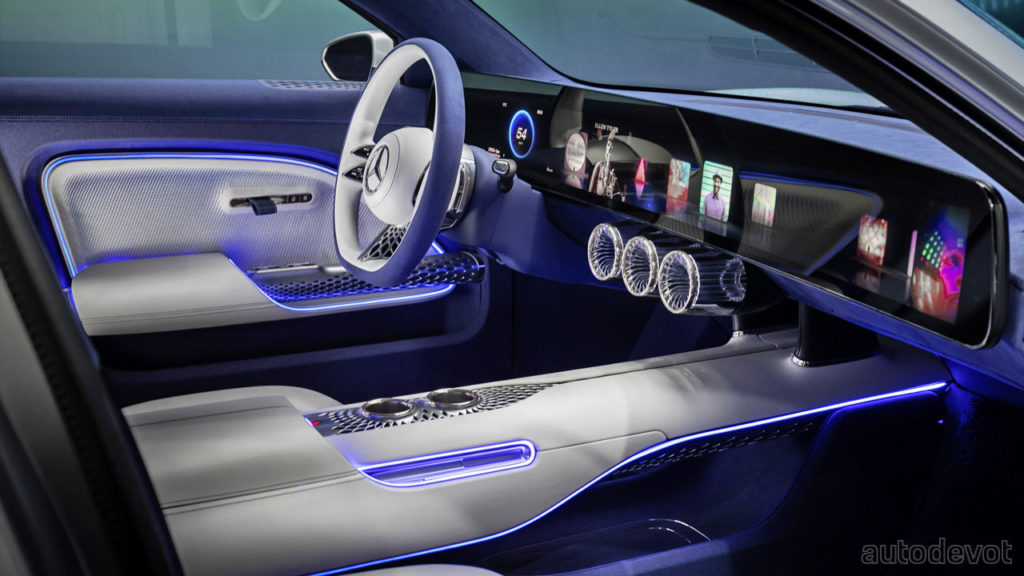 The futuristic cockpit features a 47.5-inch 8K display that spans the entire width of the dashboard. Another tech highlight is something called neuromorphic computing, where the hardware runs so-called spiking neural networks. Information is coded in discrete spikes and energy is only consumed when a spike occurs. The technology was integrated in collaboration with California-based artificial intelligence experts BrainChip. The “Hey Mercedes” hot-word detection, for example, is said to be 5 to 10 times more efficient than conventional voice control. 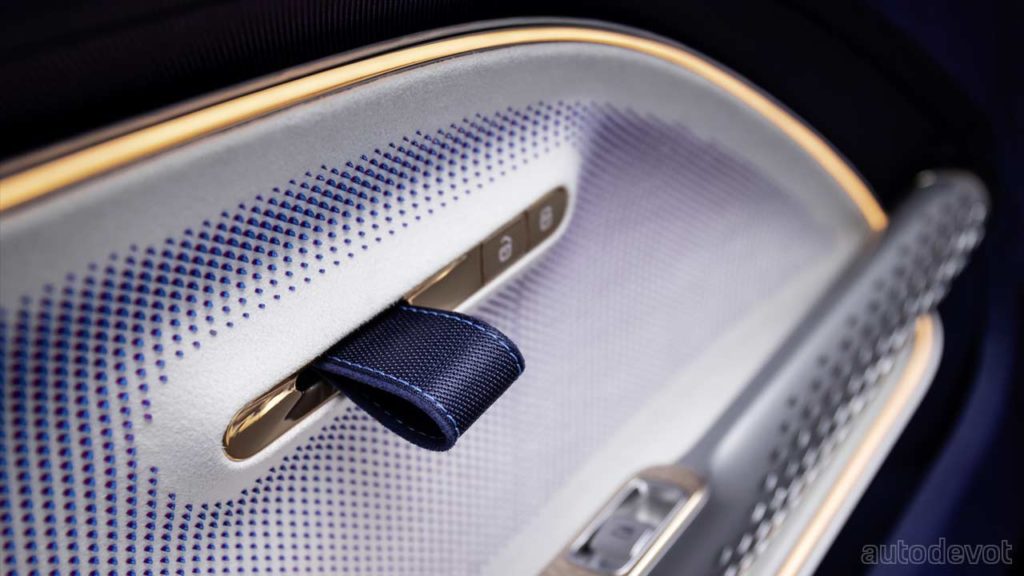 As you might expect, the cockpit is full of sustainable materials. The door pulls, for example, are made from something called Biosteel—a vegan silk-like fabric, while the seat surfaces use something called Mylo—a vegan leather alternative made from mycelium—an underground root-like structure of mushrooms. Materials made of bamboo fibres, pulverised cactus fibres and recycled PET bottles also grace the interior of the Vision EQXX. 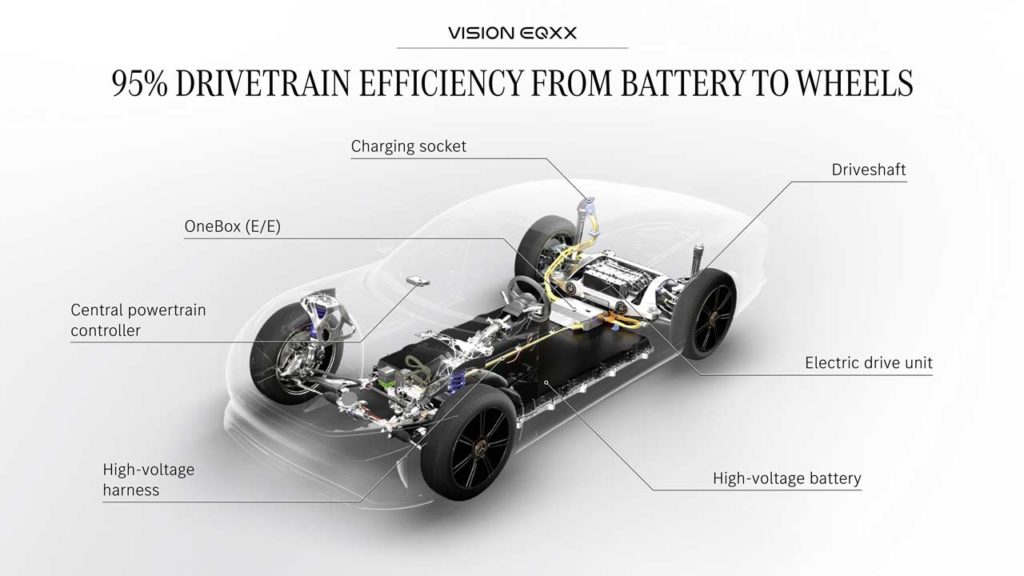 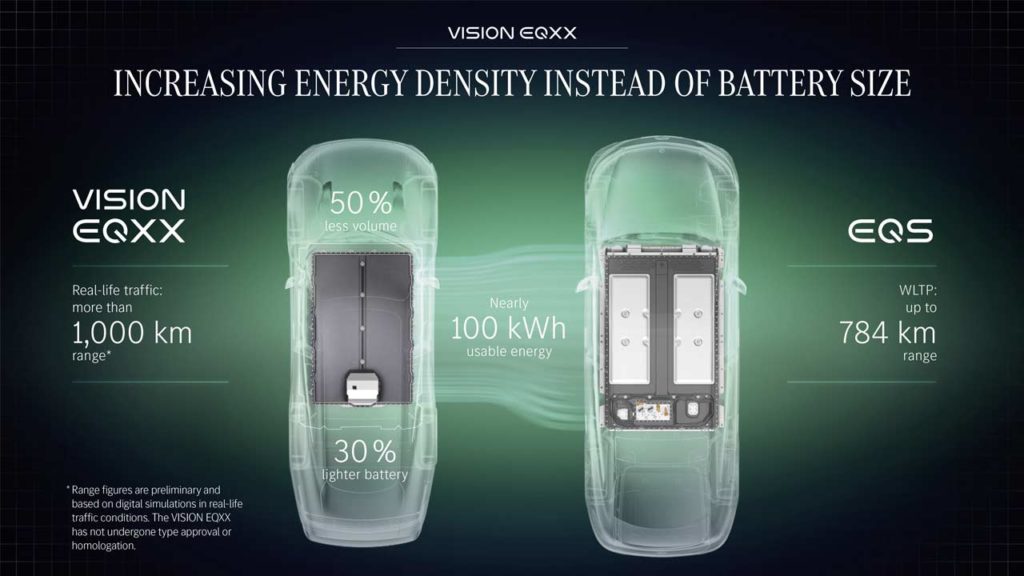 Moving on to the business end of the story, the Vision EQXX features a 900-volt architecture—which is 100-volts more than what Porsche Taycan boasts. As demonstrated in the infographics above, the battery pack is physically smaller and lighter (495 kg) than the one in EQS, yet packs 100 kWh of usable energy, with an energy density close to 400 Wh/l. Thanks to collaboration with Formula 1 experts at Mercedes-AMG High Performance Powertrains (HPP) in Brixworth, UK, up to 95% of the energy from the battery ends up at the wheels. The HPP team knows a thing or two about making every kilojoule of energy count. The Vision EQXX is said to use less than 10 kWh of electrical energy to travel 100 km (62 mi). When translated into fossil-fuel consumption, this is around the golden figure of 1 litre per 100 km (235 mpg US or 282 mpg UK).

The rear electric motor offers only about 150 kW (204 metric hp), but as mentioned already, the Vision EQXX is not interested in horsepower and torque figures. It is interested in being as efficient as possible and therefore offering more range. Mercedes estimates the concept to offer more than 1,000 km (621+ mi) on a single charge.