Ford has revealed the Ford+ Plan, in which the company has decided to split the EV and ICE businesses into separate divisions named Ford Model e and Ford Blue, respectively. I know, the names sound like upcoming new models, but they are in fact, business divisions. According to an official press release, the reason apparently for this split is “to compete and win against both new EV competitors and established automakers”. But I guess the reason Ford is doing this is to make it easy to manage when the ICE eventually dies and Ford can then simply shut the doors of the Blue division and transfer the resources to Model e. That said, when the Blue division eventually dies, Ford Model e might simply go back to just being Ford again.

Ford is also setting up Ford Pro, which “is dedicated to delivering a one-stop shop for commercial and government customers with a range of conventional and electric vehicles and a full suite of software, charging, financing, services and support on Ford and non-Ford products.” 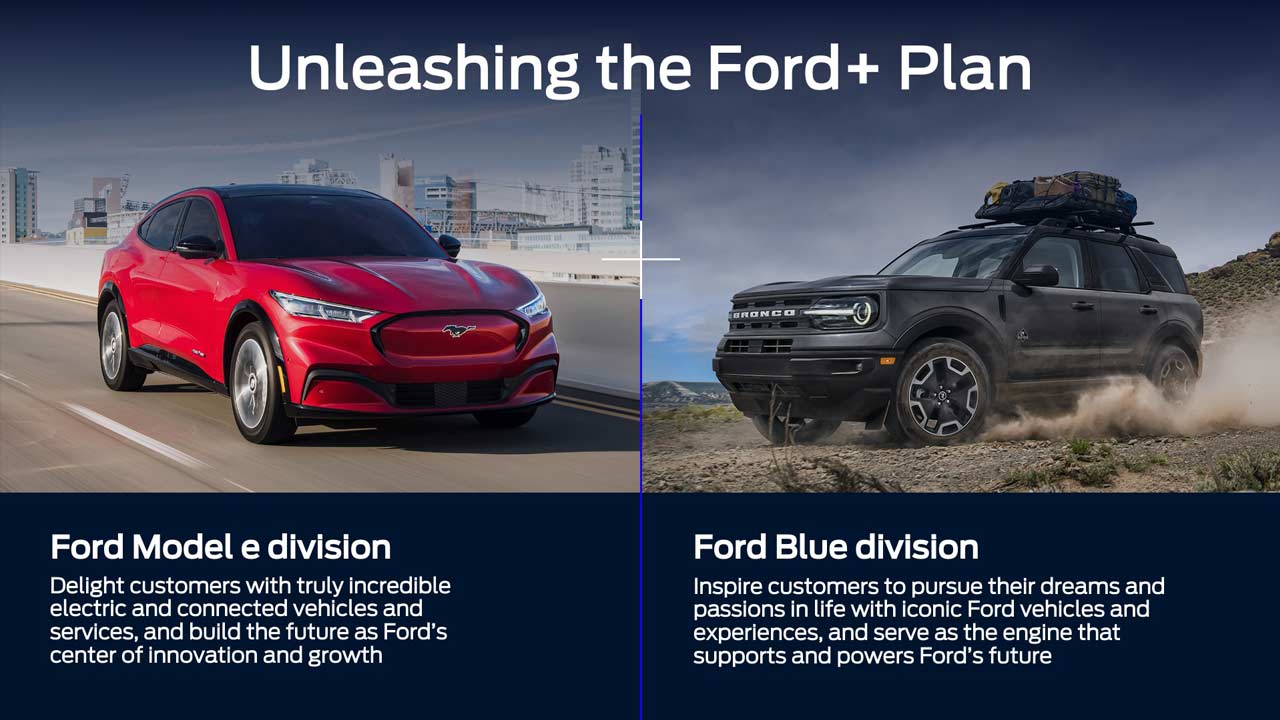 But anyway, as mentioned, Ford Blue will focus on ICE models, with a special focus on F-Series, Ranger and Maverick trucks, Bronco and Explorer SUVs, and Mustang. And of course, Ford will continue to invest in new models and derivatives. The Blue division will also offer brand and vehicle experiences, from off-roading to performance to family activities, depending on the type of ICE vehicle involved, of course.

As for the EV business, Ford aims to produce more than 2 million electric vehicles annually by 2026, which is gonna be about one-third of Ford’s global volume, rising to half by 2030. In addition, Ford expects to spend $5 billion on EVs this year, including capital expenditures, expenses and direct investments—a two-fold increase over 2021. The company aims to achieve carbon neutrality by 2050 and to use 100% local, renewable electricity in all of its manufacturing operations by 2035.

Doug Field will lead Ford Model e’s product creation as Chief EV and Digital Systems Officer. He will also lead the development of software and embedded systems for all of Ford. Marin Gjaja will be Model e’s Chief Customer Officer, heading the division’s go-to-market, customer experience and new business initiatives.