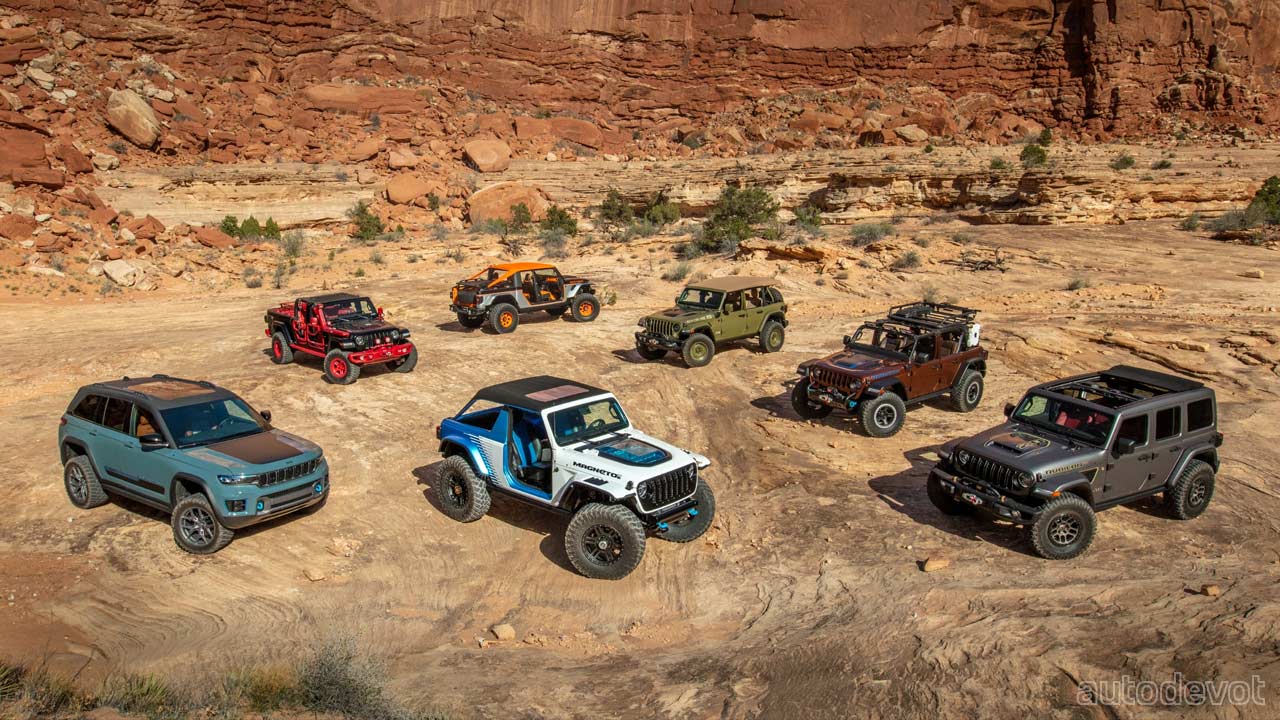 Jeep has revealed a bunch of concepts for the 2022 Easter Jeep Safari that’s gonna take place in Moab, Utah, from April 9-17. The concepts include an all-electric Wrangler Magneto 2.0 with a manual transmission. 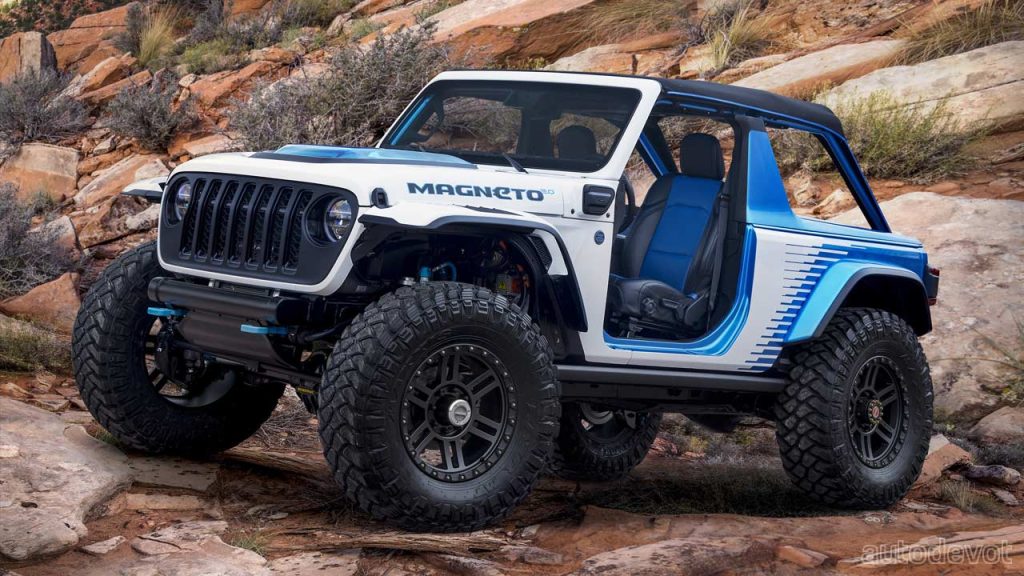 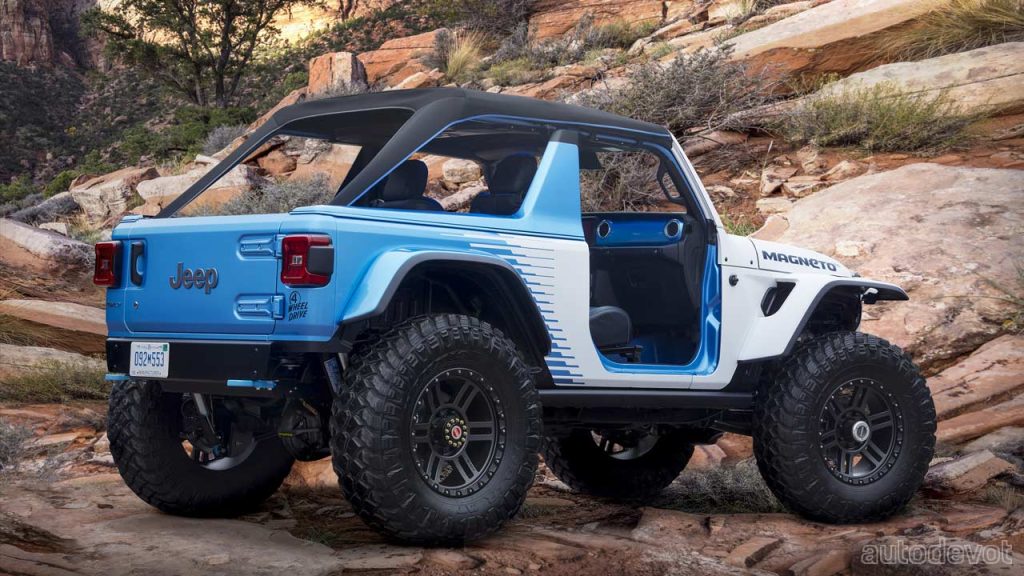 Speaking of which, the Wrangler Magneto 2.0 concept boasts an additional 12-inch wheelbase (over a two-door Wrangler), a custom 3-inch lift kit, and 40-inch off-road tires wrapped to 20-inch wheels. But that’s not what you’re really interested to know, is it? Alright then, a custom Surf Blue paint job, a custom bikini top, a carbon fiber hood, and carbon fiber wheel flares are some of the other key features. Perhaps, you’re not interested in knowing these either.

Well, the electric Wrangler is powered by a customized axial flux electric motor paired with a 6-speed manual gearbox (yes, you read that right). The first gear ratio in the manual transmission has been changed from 5.13 to 3.36. And when combined with the Wrangler Rubicon’s Rock-Trac transfer case, the Magneto 2.0 according to Jeep, demonstrates unequaled rock-crawling capability with its instant on-demand torque delivery. 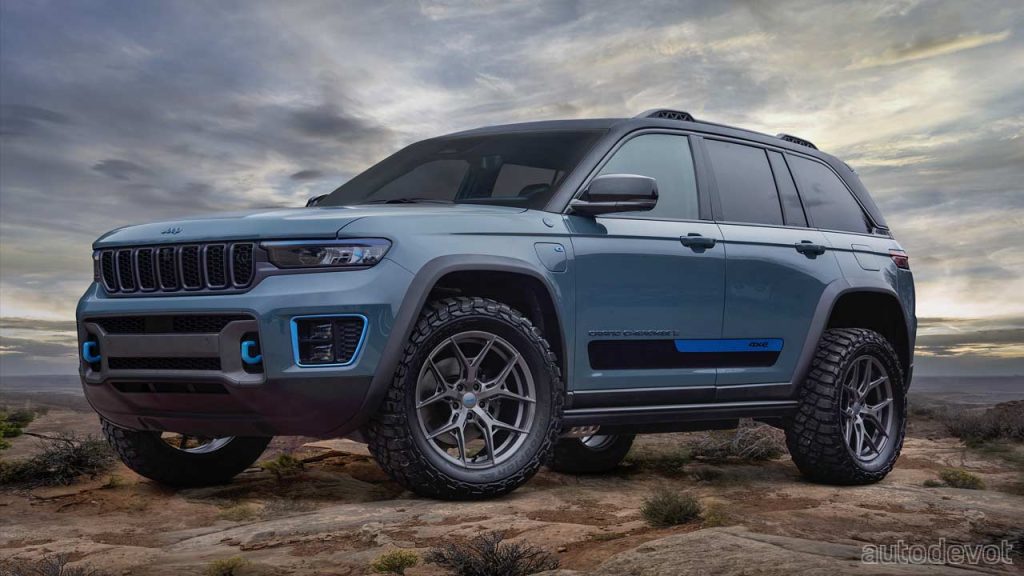 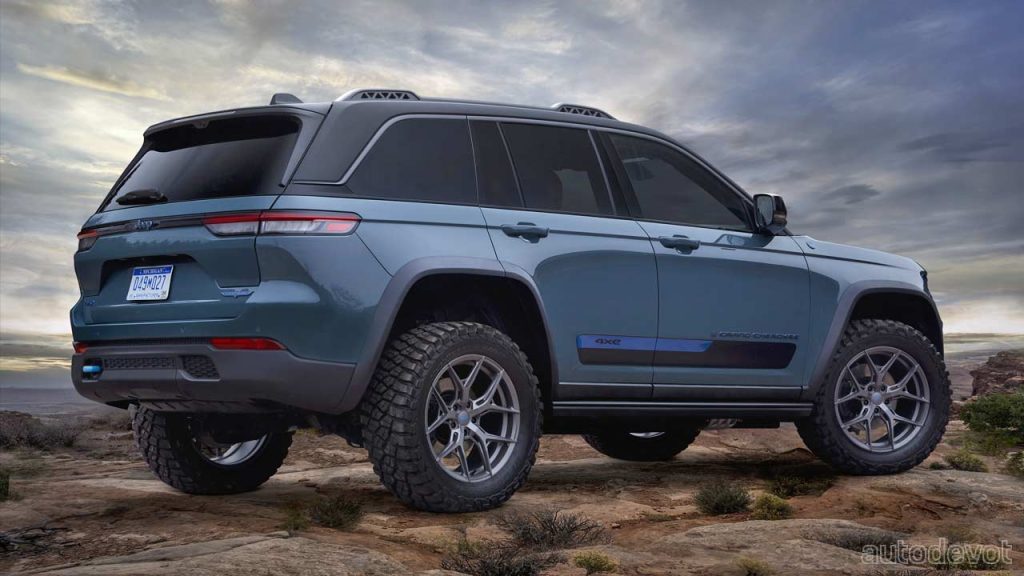 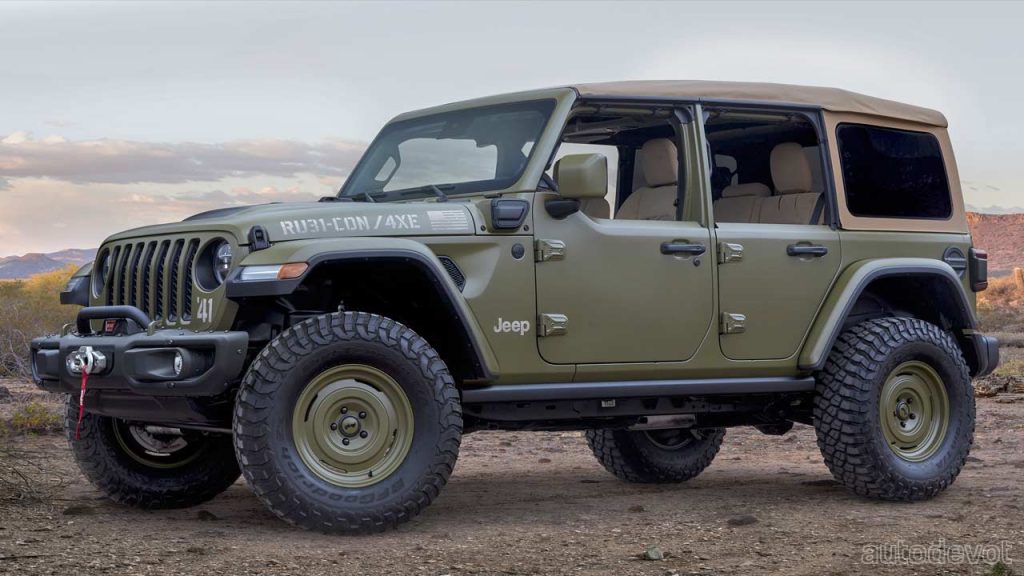 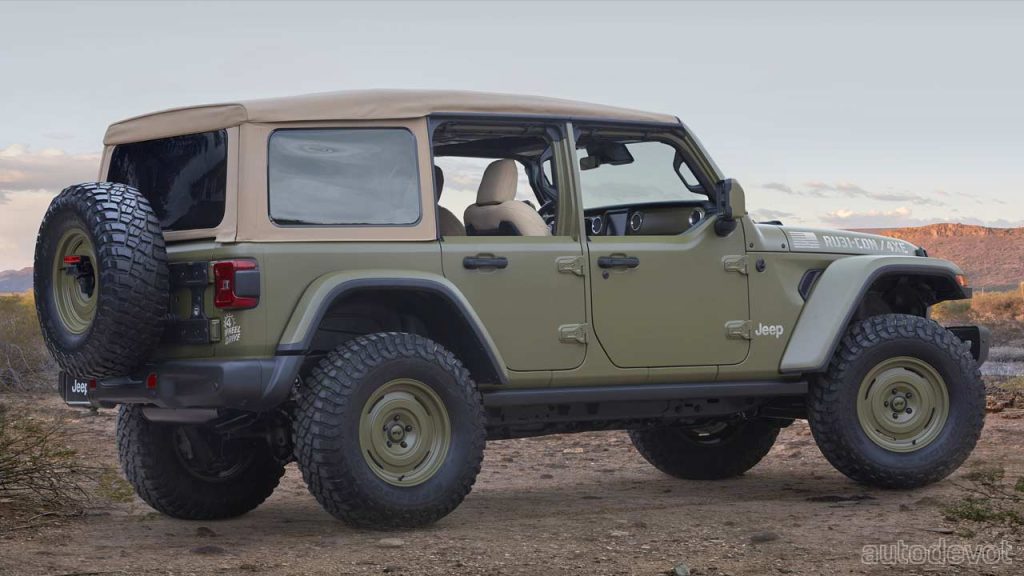 Jeep ’41 concept
The third concept we have is the Jeep ’41 concept, which pays homage to Jeep vehicles of the past, especially the original Willys built for the U.S. Army. Finished in a retro olive matte green paint with a tan soft-top, the concept boasts black powder-coated steel bumpers, Warn winch, JPP bumper hoop, and JPP half doors. It sits on a JPP 2-inch lift kit and 35-inch mud-terrain tires wrapped with 17-inch retro wheels—also painted in matte green.

But there’s nothing retro about its powertrain though, as the ’41 concept is also a PHEV—based on the Wrangler 4xe. According to Jeep, the concept’s powertrain is capable of an estimated 49 MPGe and up to 21 miles (34 km) of all-electric range.

Jeep Rubicon 20th Anniversary concept
The 4th concept is a Rubicon 20th Anniversary special, which pays homage to the original Wrangler Rubicon introduced 20 years ago. The concept is based on the quickest and most powerful Wrangler yet—the Wrangler Rubicon 392. Which means it packs a 6.4L V8 petrol engine, coupled with an active dual-mode performance exhaust that switches between wild and outrageous. 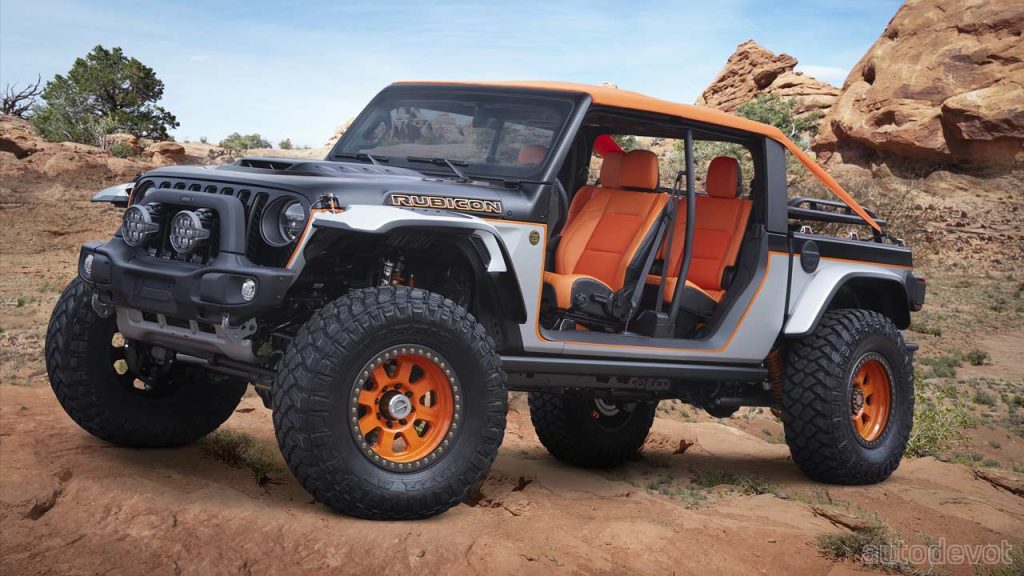 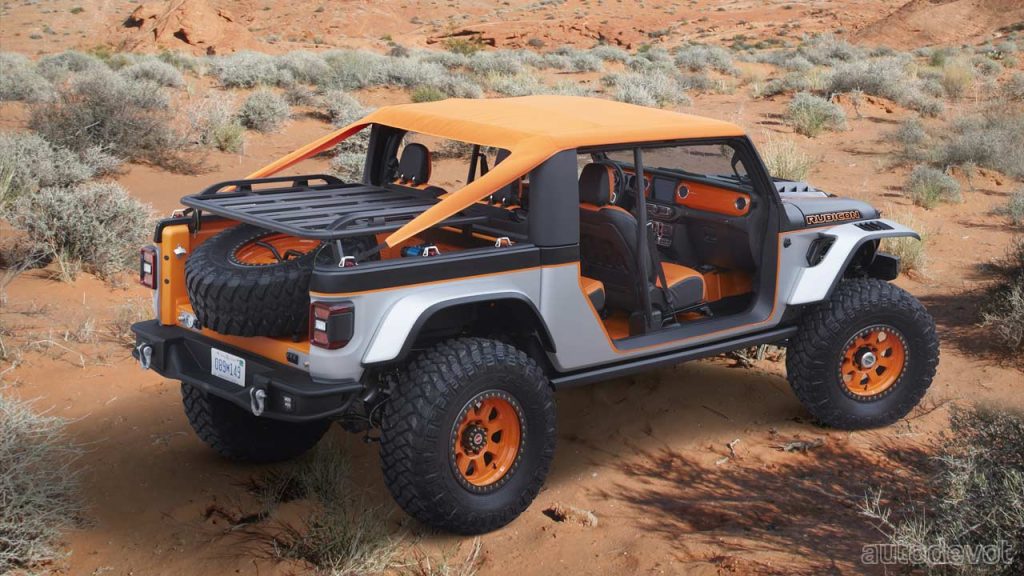 Jeep Bob concept
The 5th concept we have here is called the Bob concept, which apparently blurs the line between two mighty off-roaders, the Wrangler and Gladiator. Based on the Gladiator Rubicon, the bed has been “bobbed” a full foot of length. All four doors and B-pillars have been removed for ultimate open-air freedom. In addition, a canvas top has been stretched over a custom hardtop.

The Bob concept is powered by a 3.0L V6 diesel engine paired with an 8-speed automatic transmission. It’s also equipped with a Mopar cold-air intake to further boost torque and improve fuel economy. 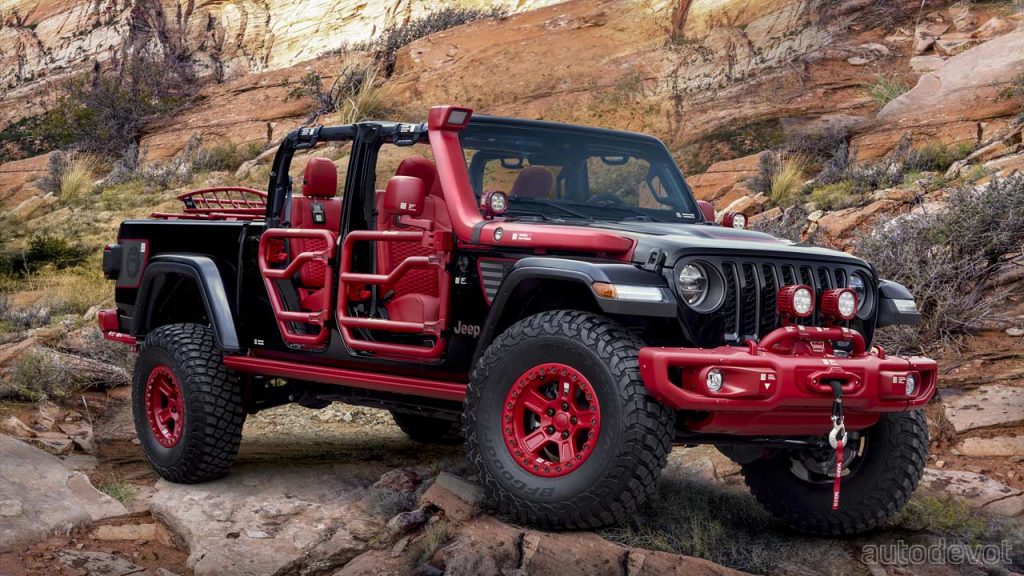 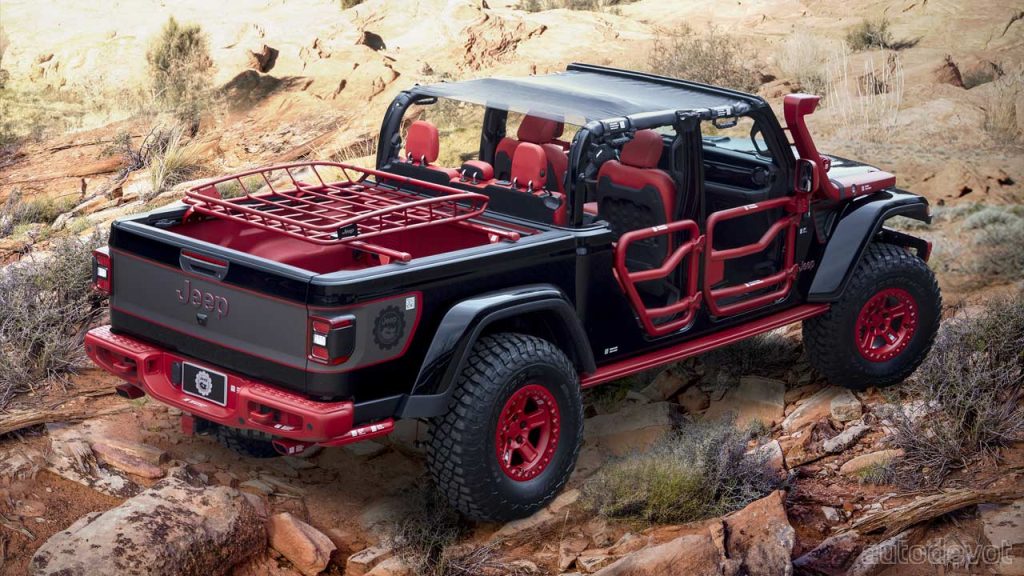 Jeep D-Coder concept
The 6th concept we have is a 3.6L Pentastar-powered Gladiator D-Coder concept, which is loaded with more than 35 JPP and Mopar accessories, each painted in contrasting Maraschino Red and labeled with QR (quick response) codes, making this off-roader a rolling catalog of factory-backed items available for customers to purchase. 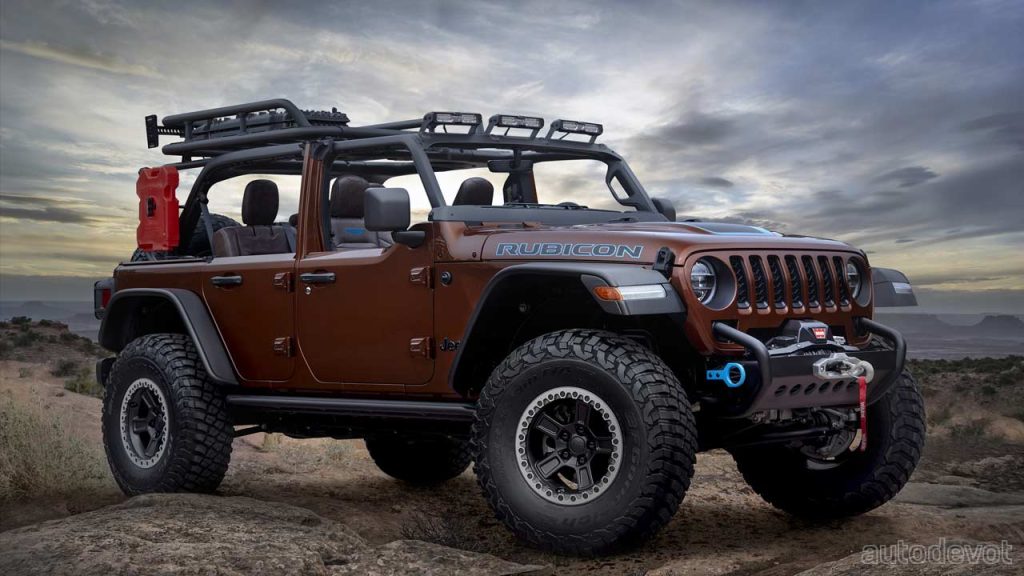 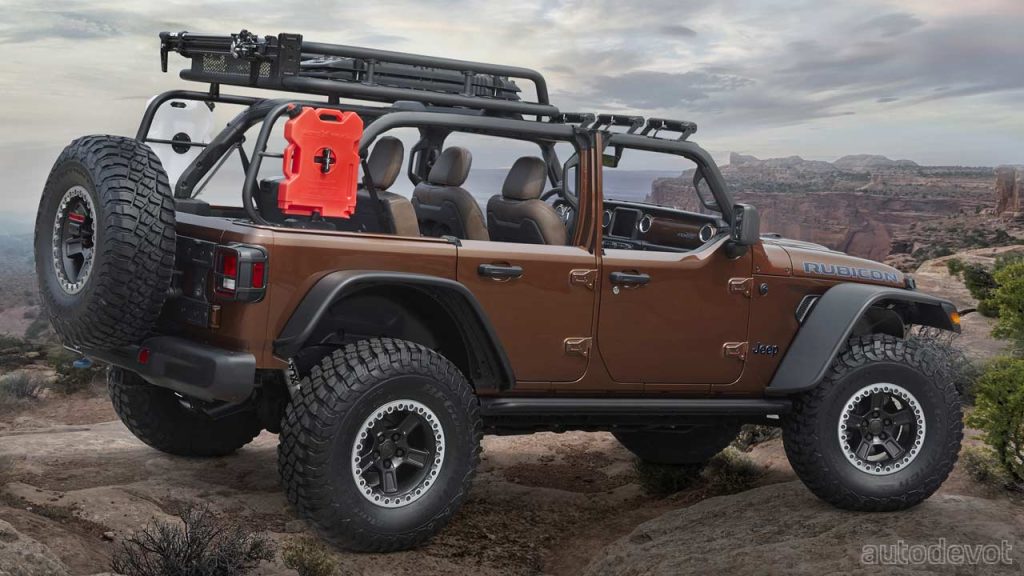 Jeep Birdcage concept
And finally, we have the Birdcage concept, which is also adorned with JPP and Mopar accessories. These include a JPP 2-inch lift kit with FOX shocks specially tuned for the Wrangler 4xe PHEV; JPP 17-inch 5-spoke beadlock wheels wrapped with BFGoodrich 37-inch tires, and header-mounted JPP TYRI off-road LED lights.