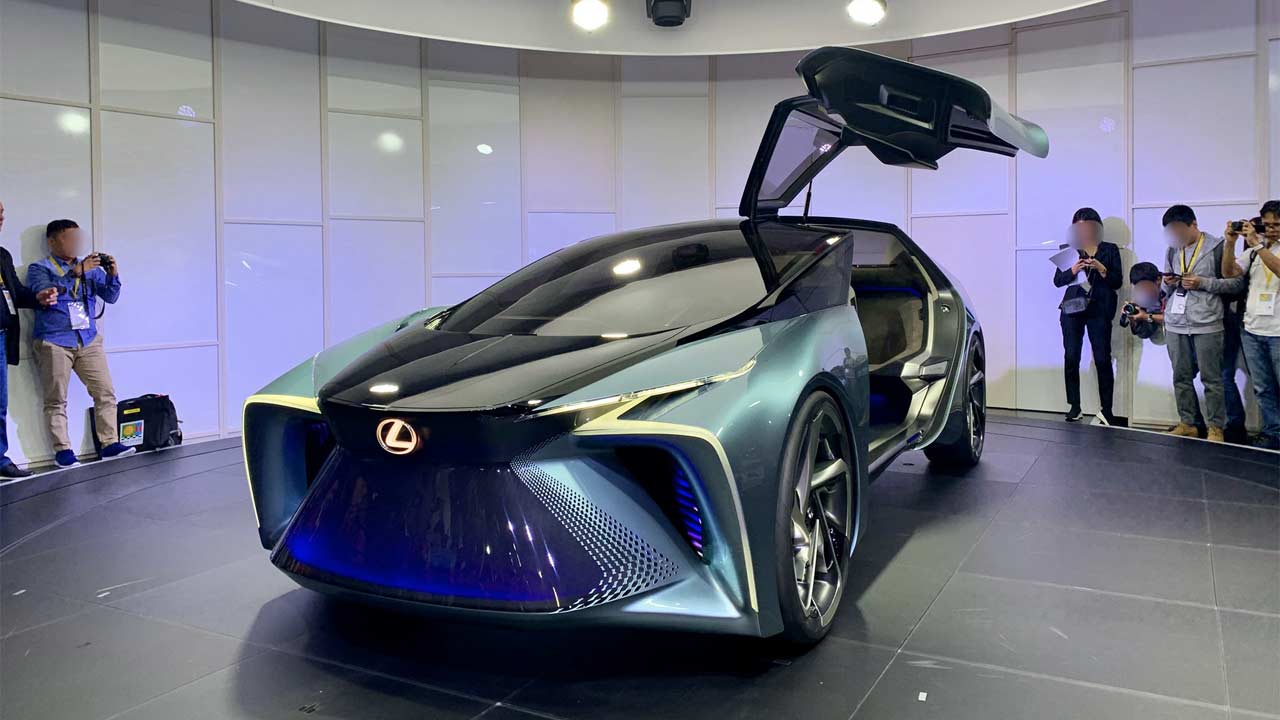 Although Lexus is a young 30-year-old brand, its parent Toyota is still the largest carmaker in the world with vast experience in building various types of automobiles from sports cars to two-door urban BEVs. In recent years, the company has been focusing more on electrification and naturally, there are big plans for its luxury marque too.

Part of those plans is this LF-30 Electrified (concept), which has time traveled from the year 2030. The LF-30 is an electric vehicle featuring various technologies including autonomous driving. As with most Lexus production vehicles of today, the design is controversial and not intended to please everyone. 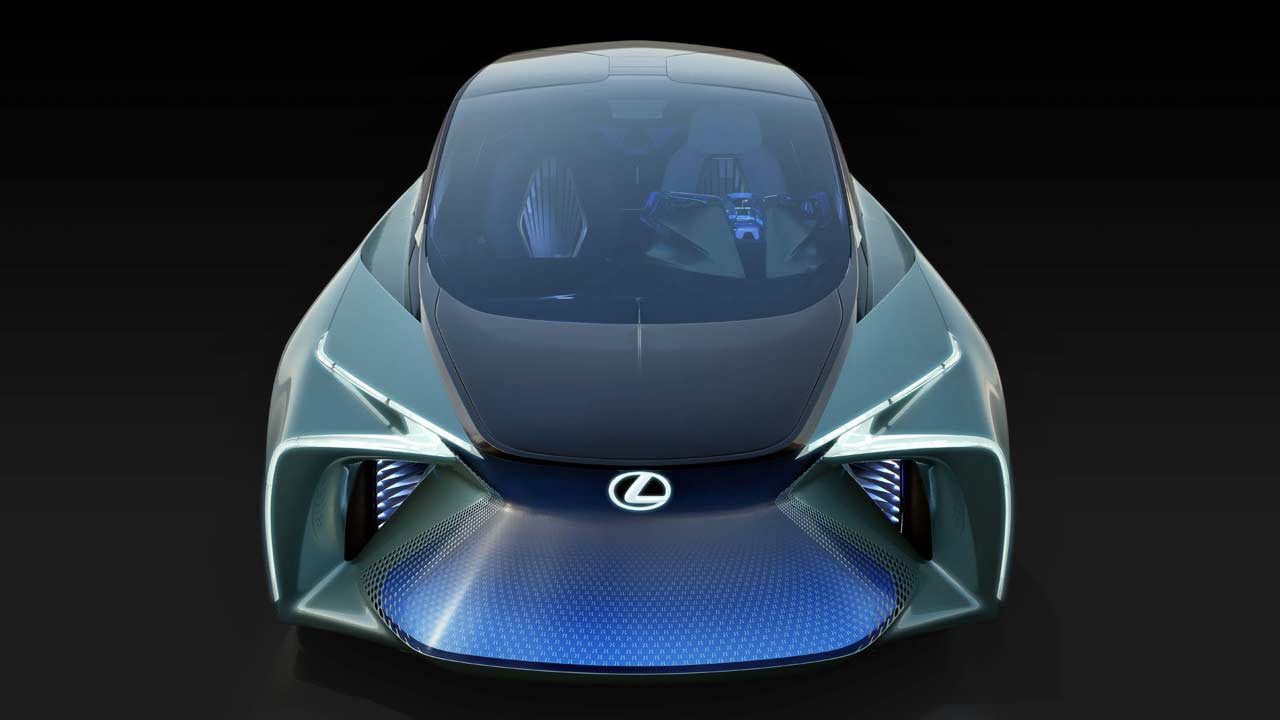 The signature “spindle” grille at the front spans the entire vehicle width in a 3D form, while the rest of the vehicle has sharp creases and L shapes. The concept is pretty big too. In case you’re wondering, it measures 5,090 mm in length, 1,995 mm in width and 1,600 mm in height. At 3,200 mm, the wheelbase appears to be generous too. The front illumination changes depending on whether the vehicle is being operated in its normal mode or in autonomous driving mode. 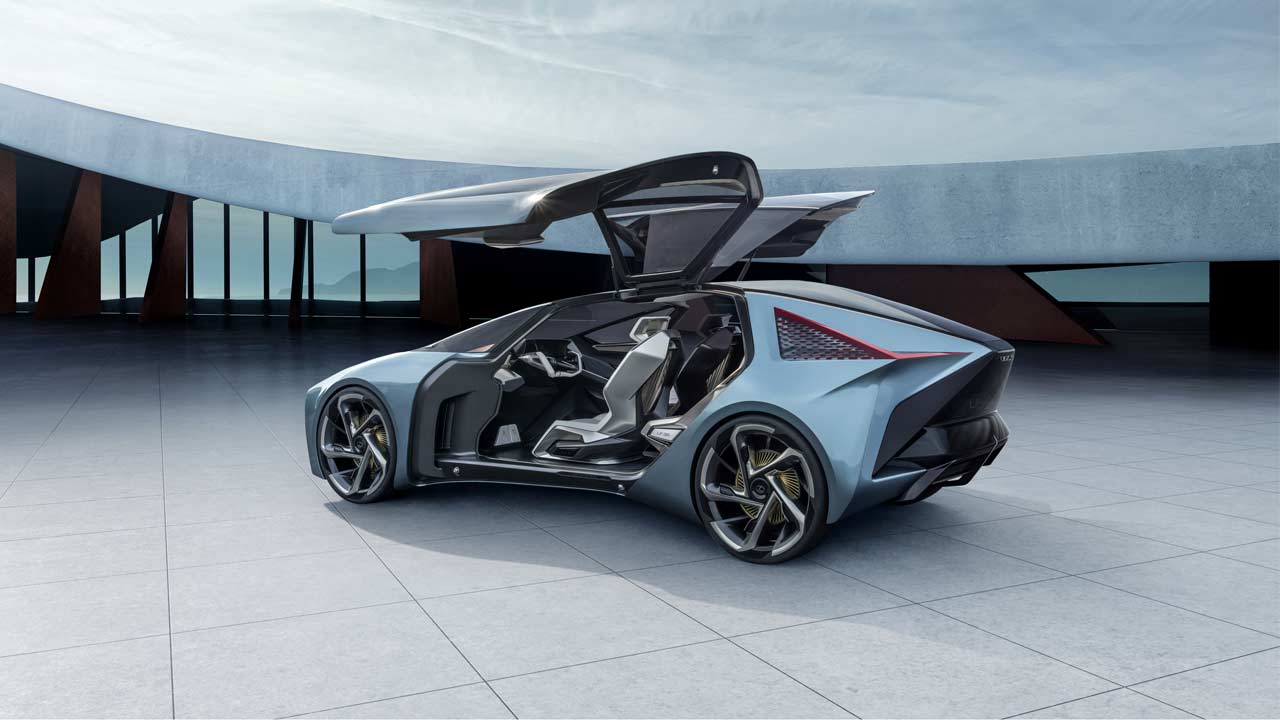 Another design highlight is, of course, those gigantic gullwing doors which enable access to both the front and rear seats of the car. The wheel design might remind you of the ones on the Bugatti La Voiture Noire. The exterior paint is called ‘Voltaic Sky’; it has a special coating tinted by a touch of blue-green. 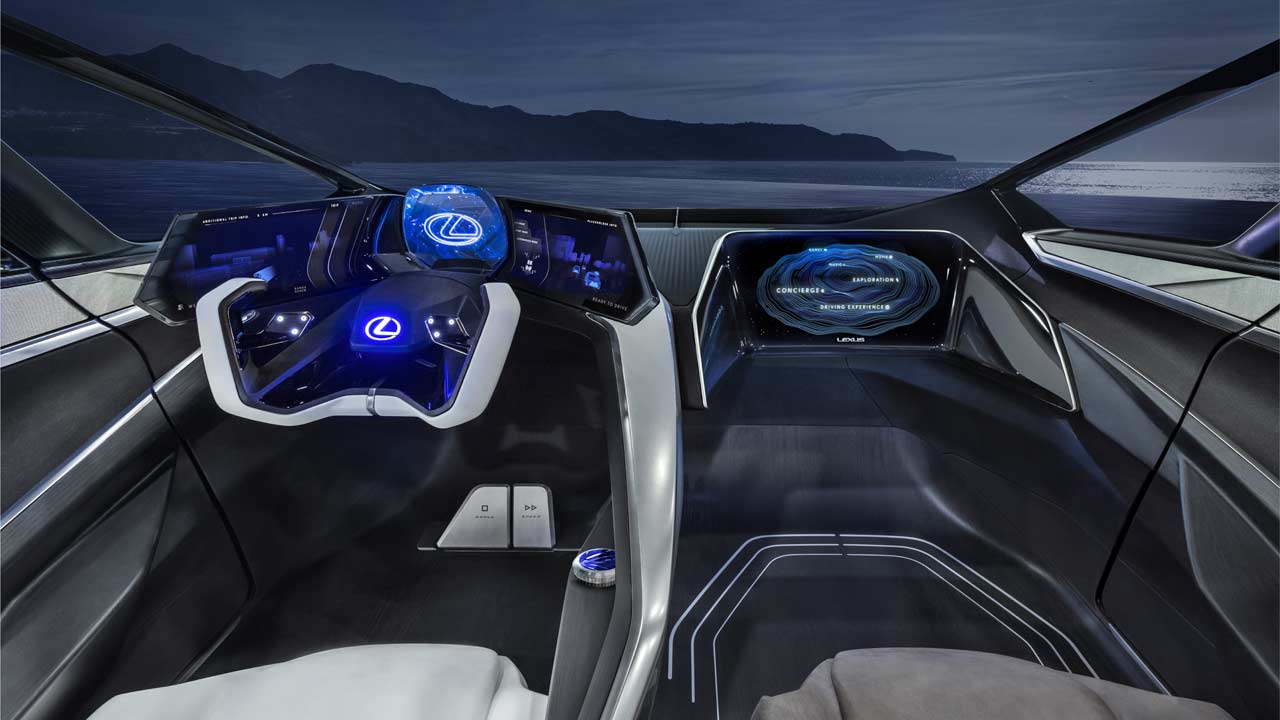 The interior layout indeed looks like it came from 2030, with AR (augmented reality) interfaces and gesture controls. According to Lexus, the interior design is based on the brand’s new concept of “Tazuna”, inspired by how a single rein can be used to achieve mutual understanding between the horse and rider. Apparently, the idea was to enable the driver to focus on driving while controlling various functions, such as the navigation, audio system and driving mode selection, without having to shift the vision or operate manual switches. 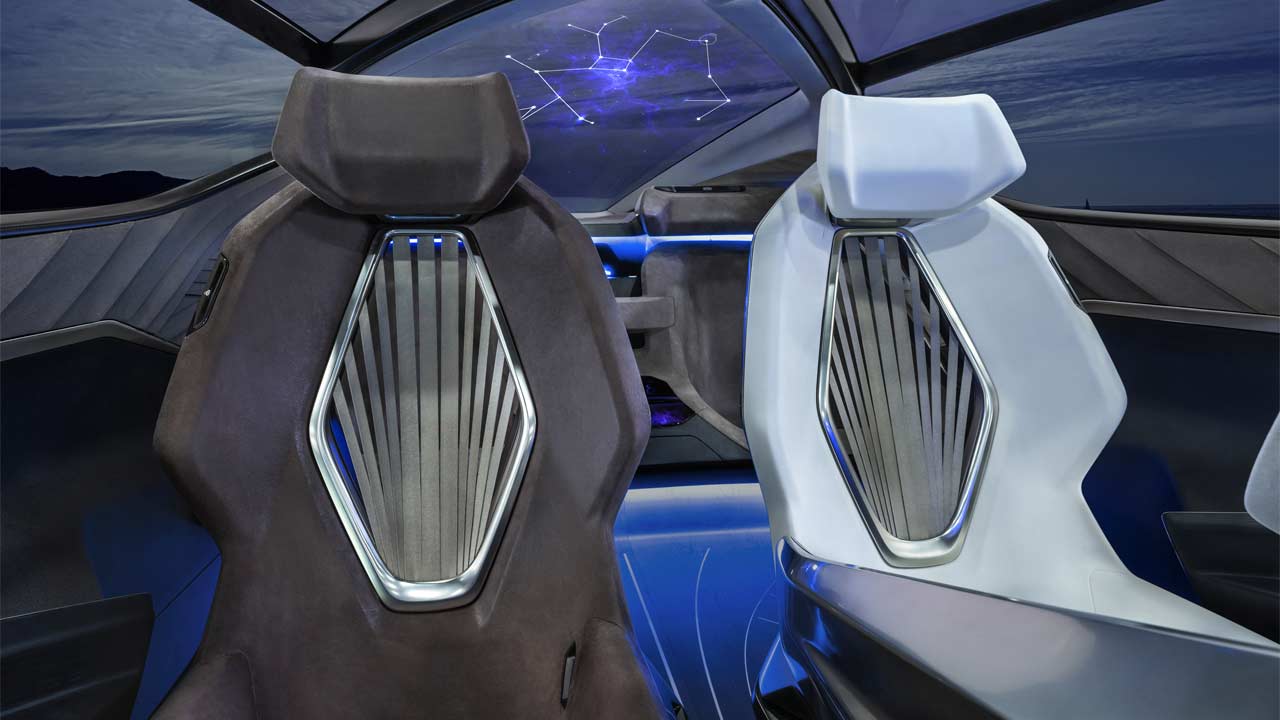 As for the audio, the LF-30 gets Harman’s Mark Levinson audio system with speakers built into the headrests. They also have a noise-canceling feature.

As mentioned earlier, the vehicle is capable of autonomous driving and the steering retracts a bit in that mode. If you watch the video above, you’ll notice Lexus’ imagination gone wild with technologies including a ‘Lexus Airporter’ drone to carry the passengers’ luggage. The autonomous driving tech is split into two modes: Chauffeur mode and a Guardian mode. There’s also a self-parking function and a front-door pickup function as well.

Lexus also talks about something called Advanced Posture Control, which stabilizes the driver’s line of sight for more confidence and comfort. This is achieved by dynamically adjusting the torque delivered to each wheel and optimizing the turning posture.

Other notable features include the steer-by-wire system which eliminates a mechanical connection “to allow for more flexible turning control depending on the driving conditions and more precise steering feel aligned with the driver’s intention”. 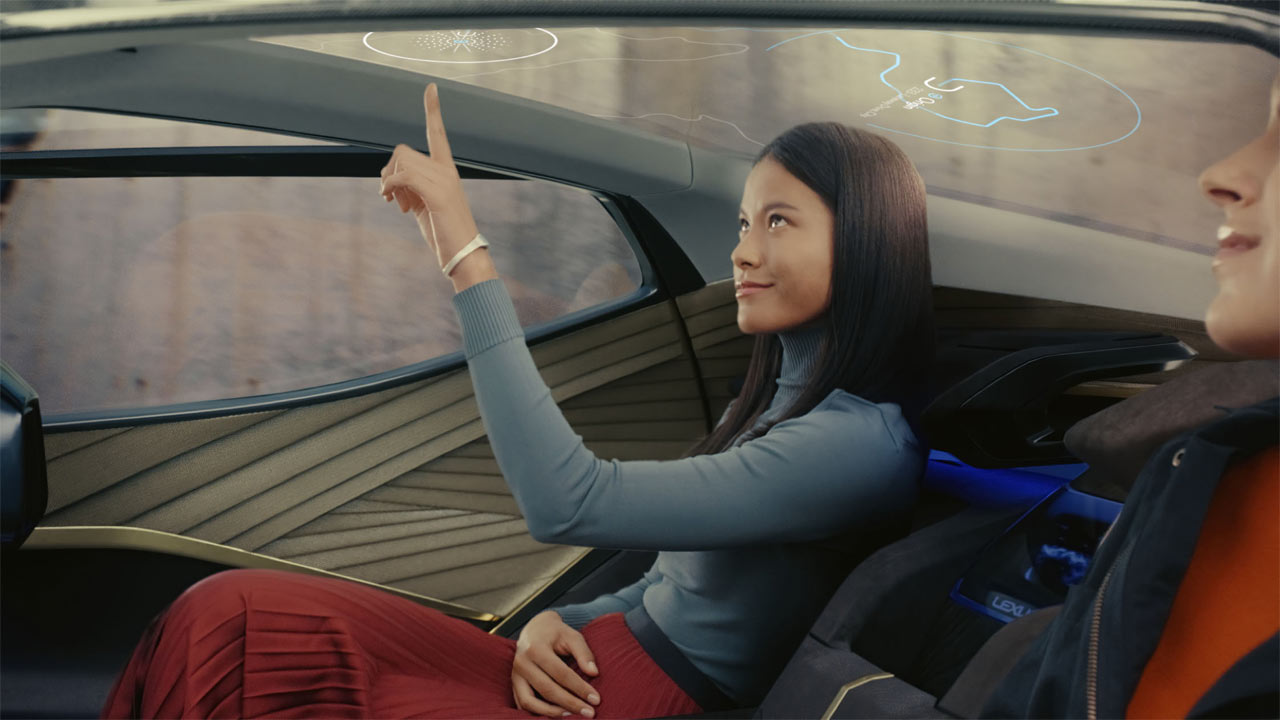 The rear seats use artificial muscle technology to mold to their occupants and can support various modes such as reclining, relaxation, and alert functions. The rear occupants also get a gesture-controlled ‘SkyGate’ glass that uses AR to display various types of information, such as a realistic star-filled sky, user-favorite videos, and even navigation.

Sustainability has been given some importance too. Yakisugi (charred cedar), a traditional Japanese material, is used in the floor and steering controller while recycled metal was processed into fibers for use in the door trims. 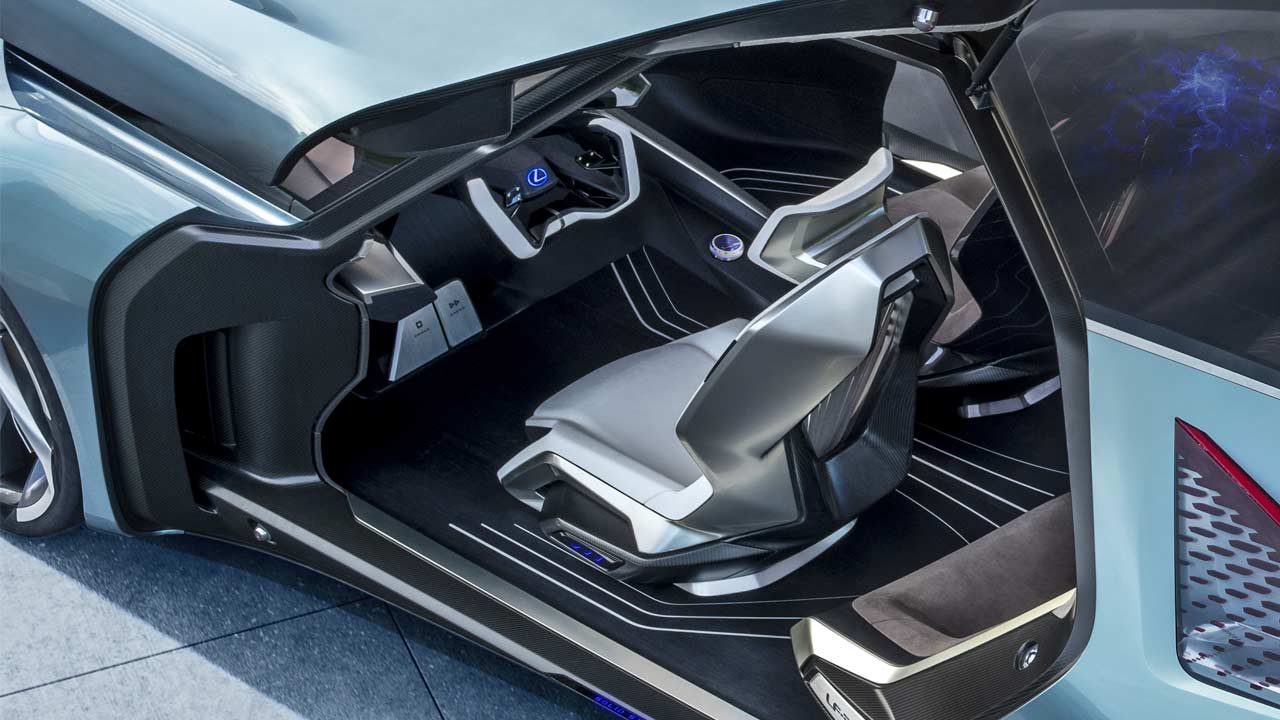 Lexus plans to unveil its first BEV in November 2019. There are plans to introduce a PHEV and a new dedicated BEV platform at a later date. By 2025, Lexus will have electrified versions of all models, and the brand aims the sales of electrified vehicles to outpace those of the conventional ICE models. 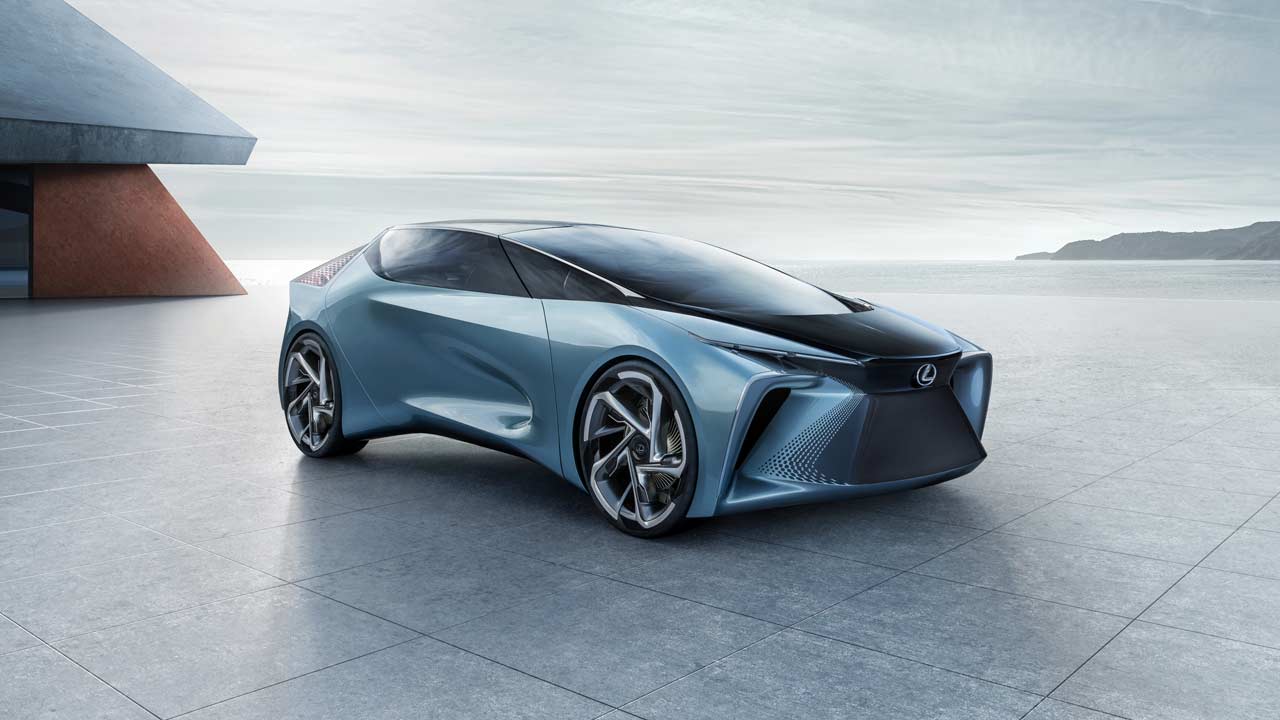 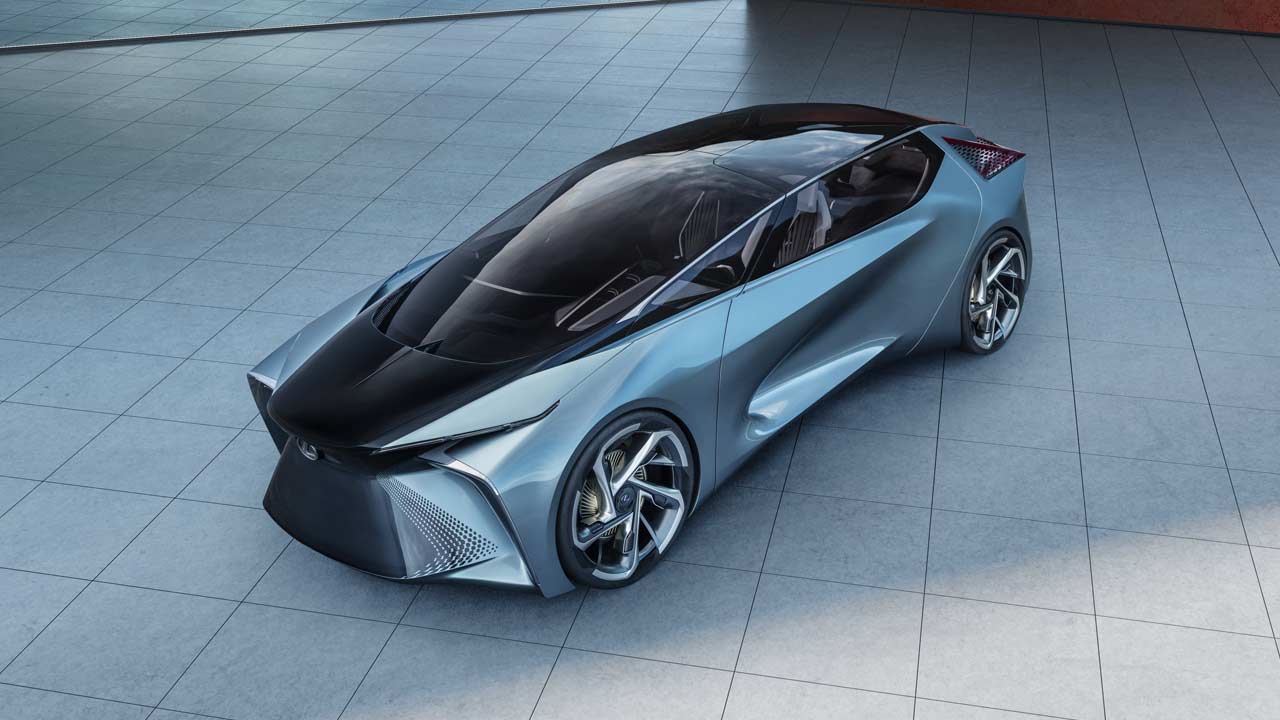 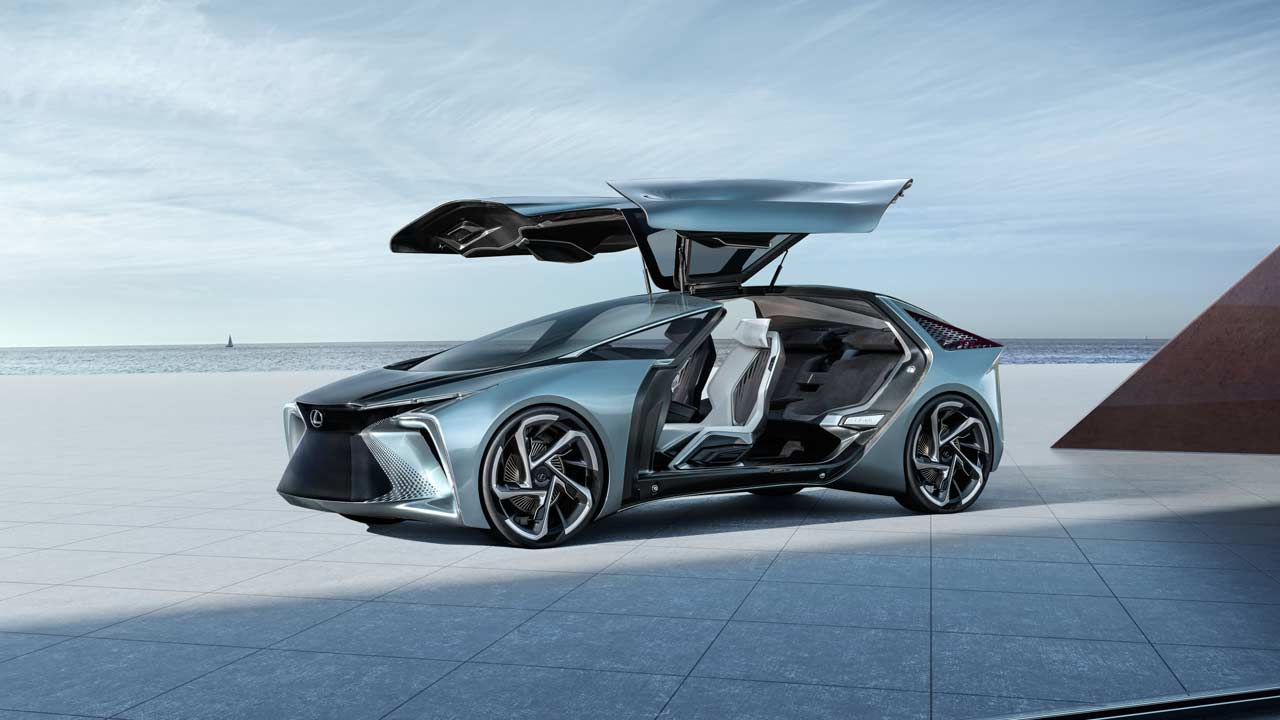 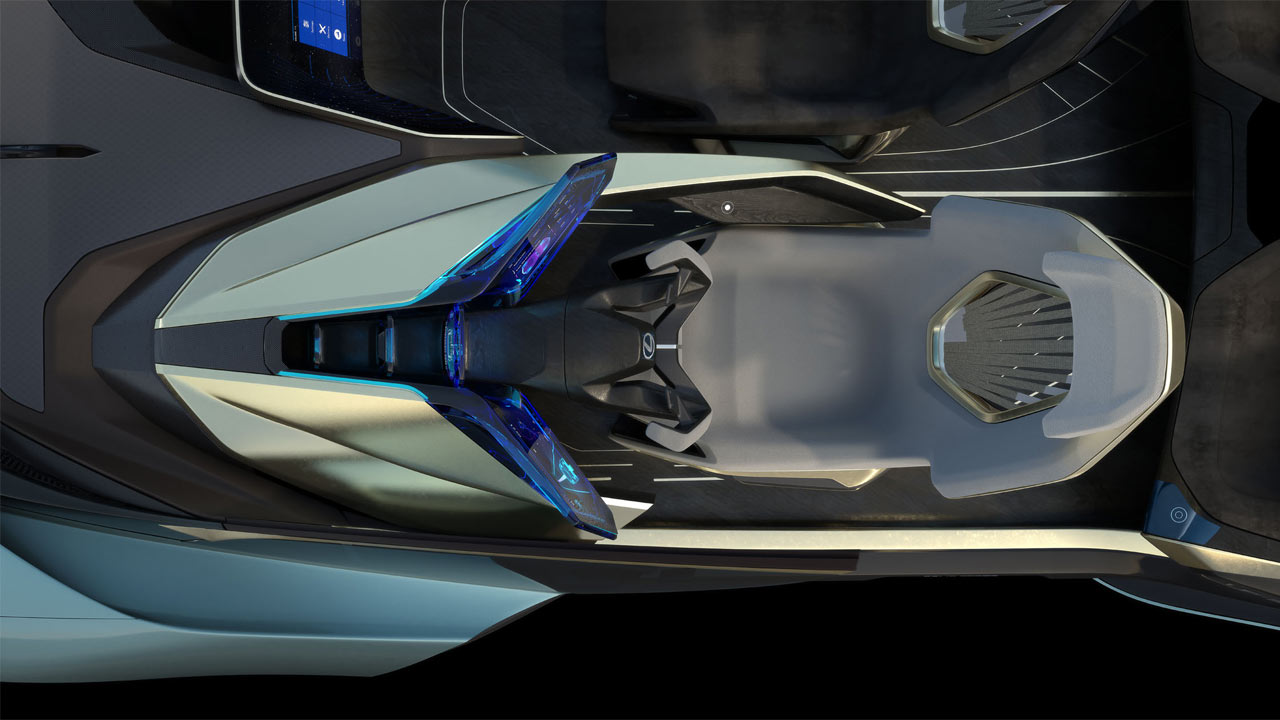 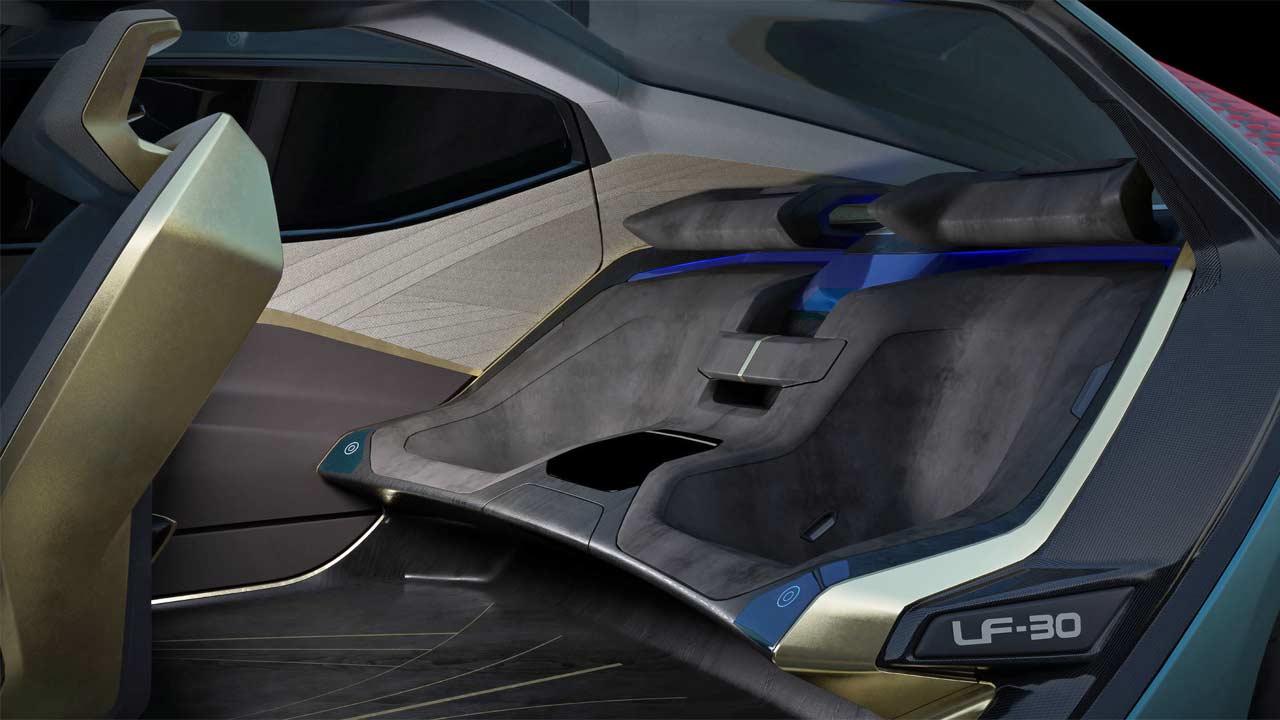 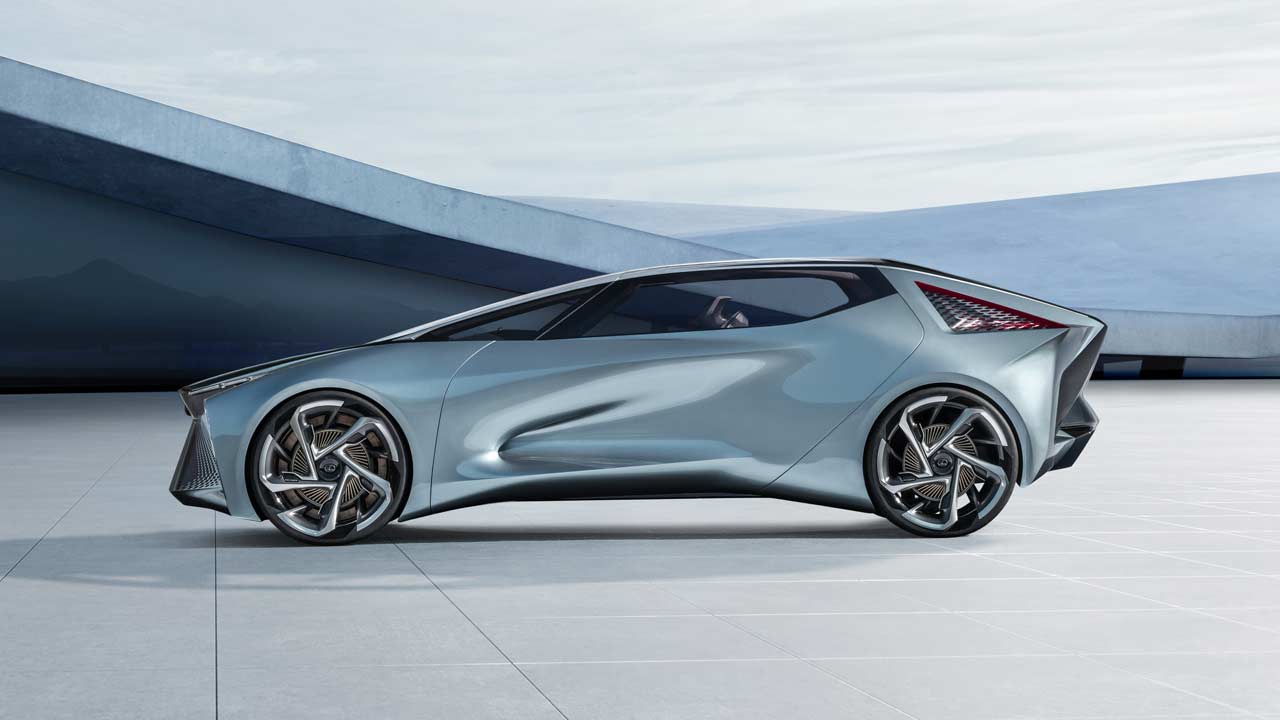 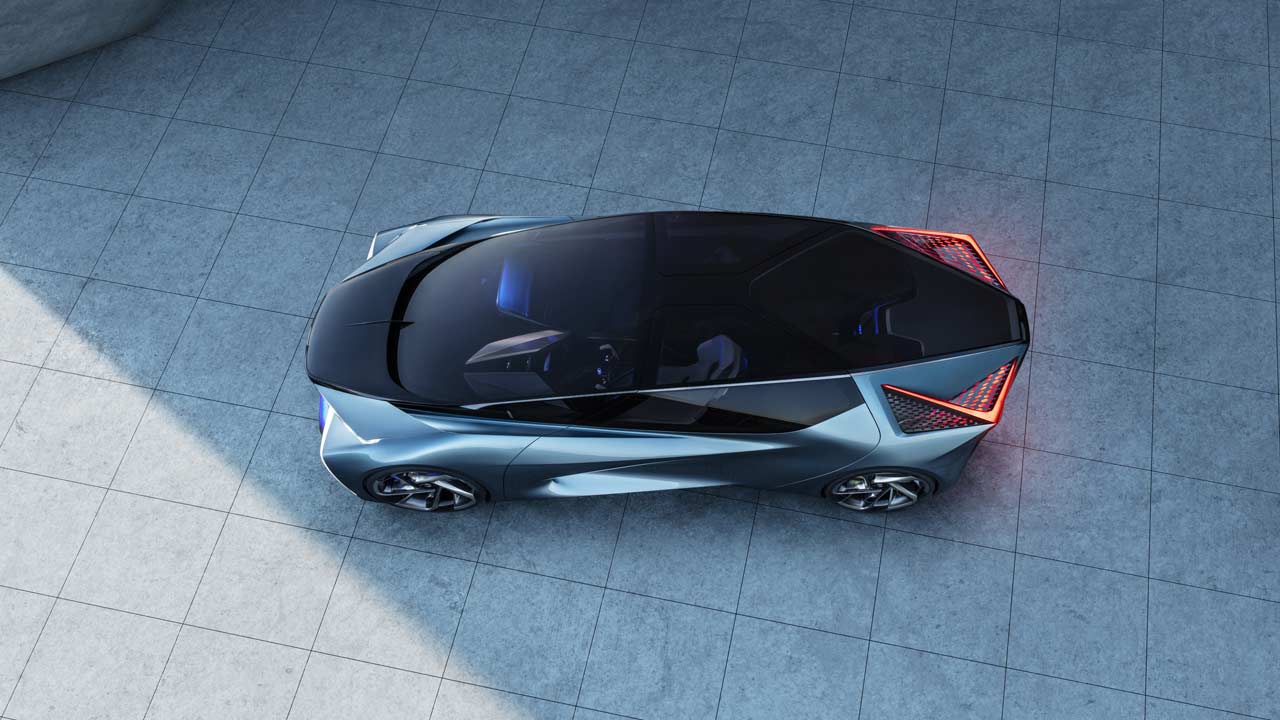