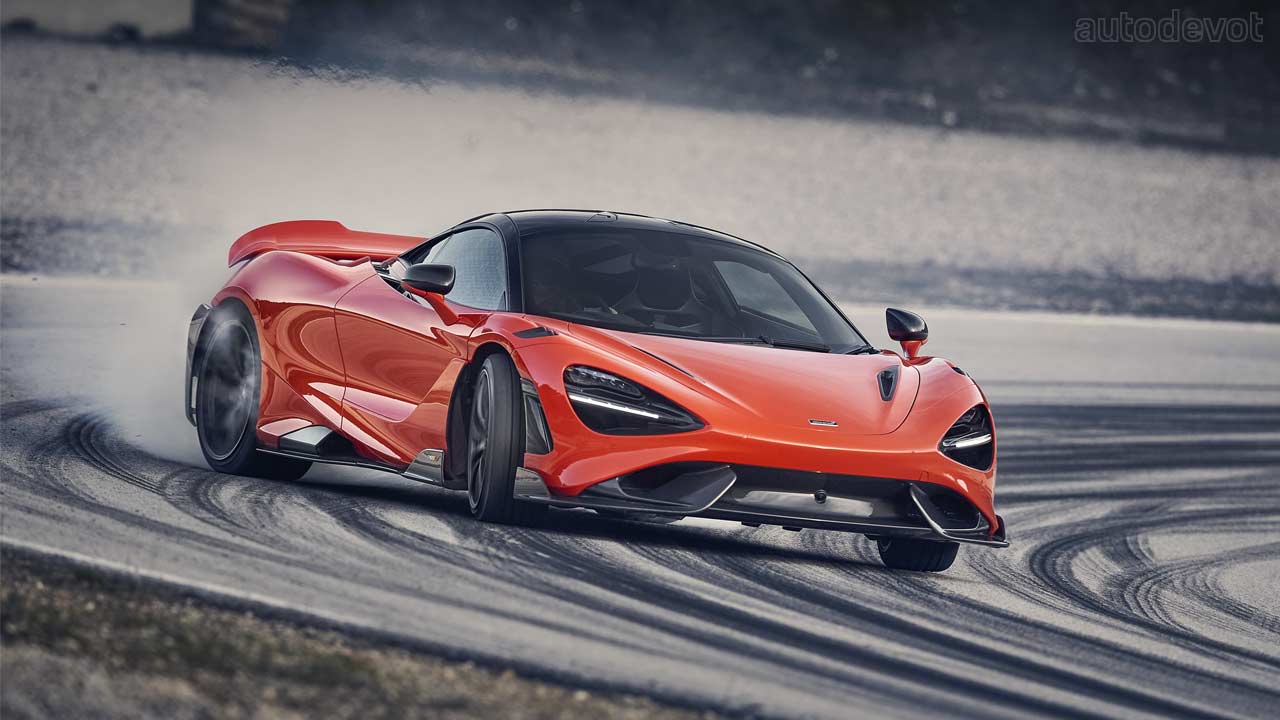 McLaren has revealed the latest member of the Longtail species, in fact, the successor to the fairly successful 675LT. It is called the ‘765LT’ and there’s a lot more to it than simply interchanging the numbers and confusing poor people like us. In dummy terms, it’s a much-improved, track-focused 720S.

While it does look very similar to the 720S, the 765LT is literally longer measuring 4,600 mm in length, which is 57 mm more than the 720S. At 1,157 mm height, it is 39 mm shorter too. However, the wheelbase of 2,670 mm remains identical. Contributing to the increased length is the rear wing that stretches rearwards by an additional 9 mm; it also has a 20% larger surface area than the 720S’ wing. 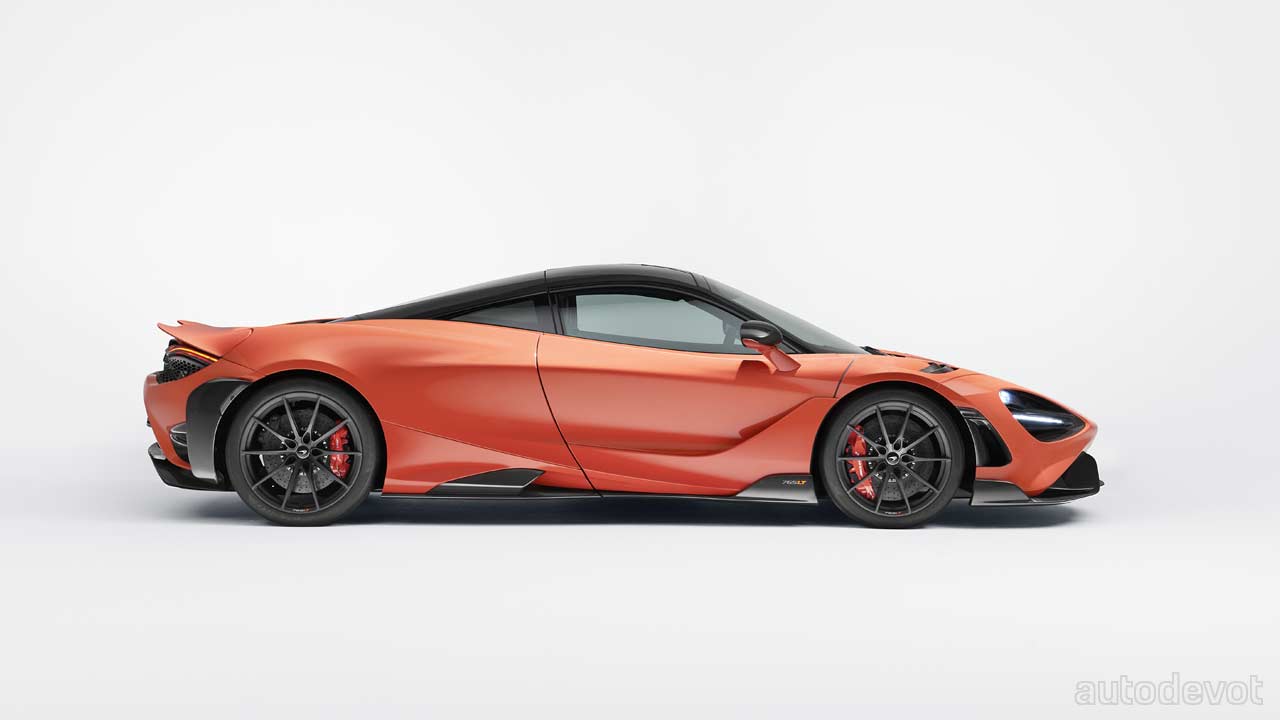 The front splitter sits closer to the ground due to a 5 mm reduction in front ride height that increases the vehicle rake to create more front downforce. The nose of the car has been lengthened by 48 mm, both the front bumper and front splitter moving further forward, which all explains the 57 mm increased length. While the vehicle width (2,161 mm, with mirrors) is identical to the 720S, the front track is wider by 6 mm. 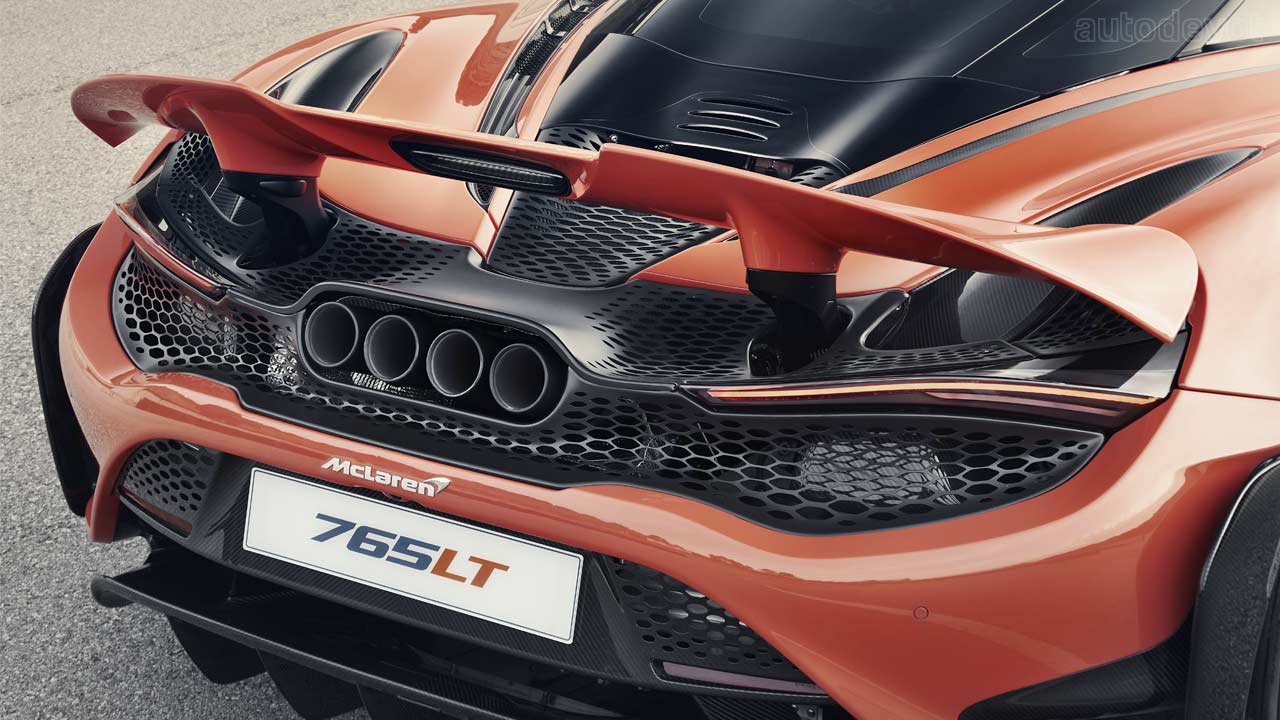 The newly elevated static position increases downforce levels even when the wing isn’t deployed and with the new design having a minimal effect on drag, aero efficiency – the downforce-to-drag ratio – also increases by 20% over the 720S, McLaren said. The quad-exit full-titanium exhaust system is claimed to be 40% lighter than a comparable steel system.

The rest of the styling is, of course, dictated by aerodynamics. There are carbon fibre louvers on the front fenders à la GT2/GT3 RS in a gloss finish. In addition to the aforementioned active rear wing, the carbon fibre aero elements also include a front splitter, side skirts, and rear diffuser. 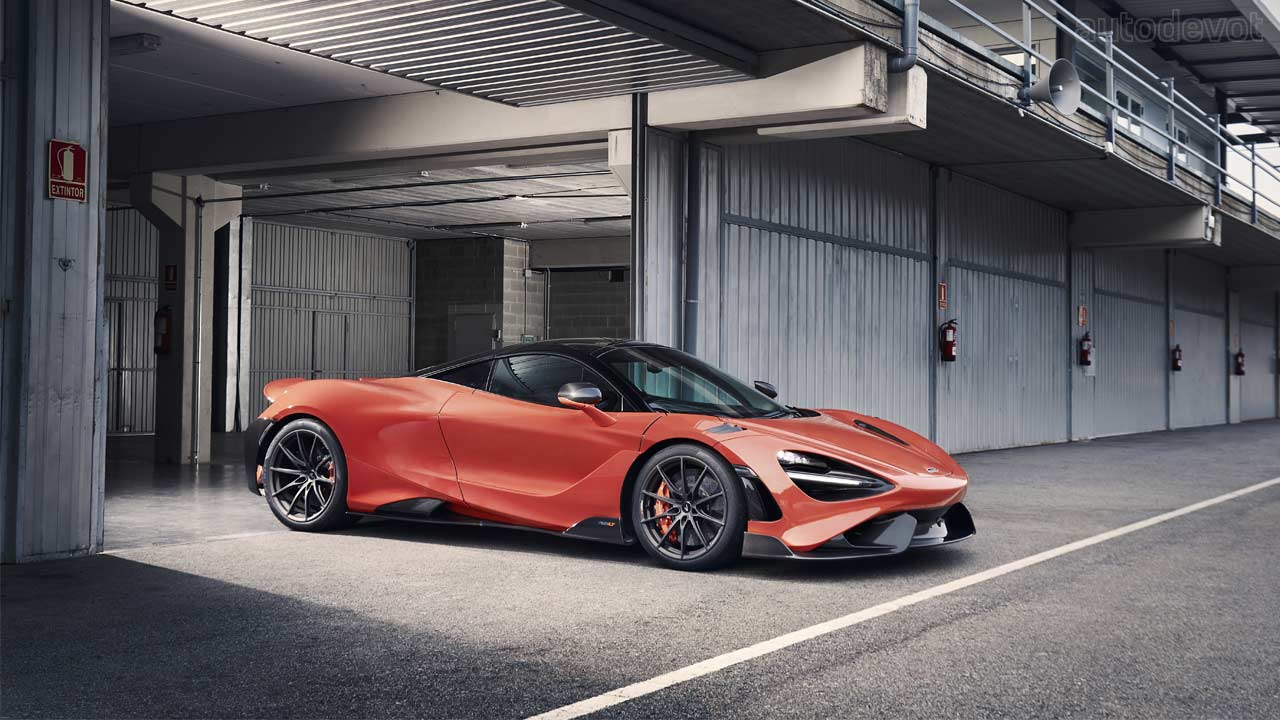 The bonnet, front fenders, doors and rear fenders are made of aluminium as standard while they can be optionally had in carbon fibre to further cut down the weight. The carbon fibre components are produced at the McLaren Composites Technology Centre (MCTC) in Yorkshire, UK. 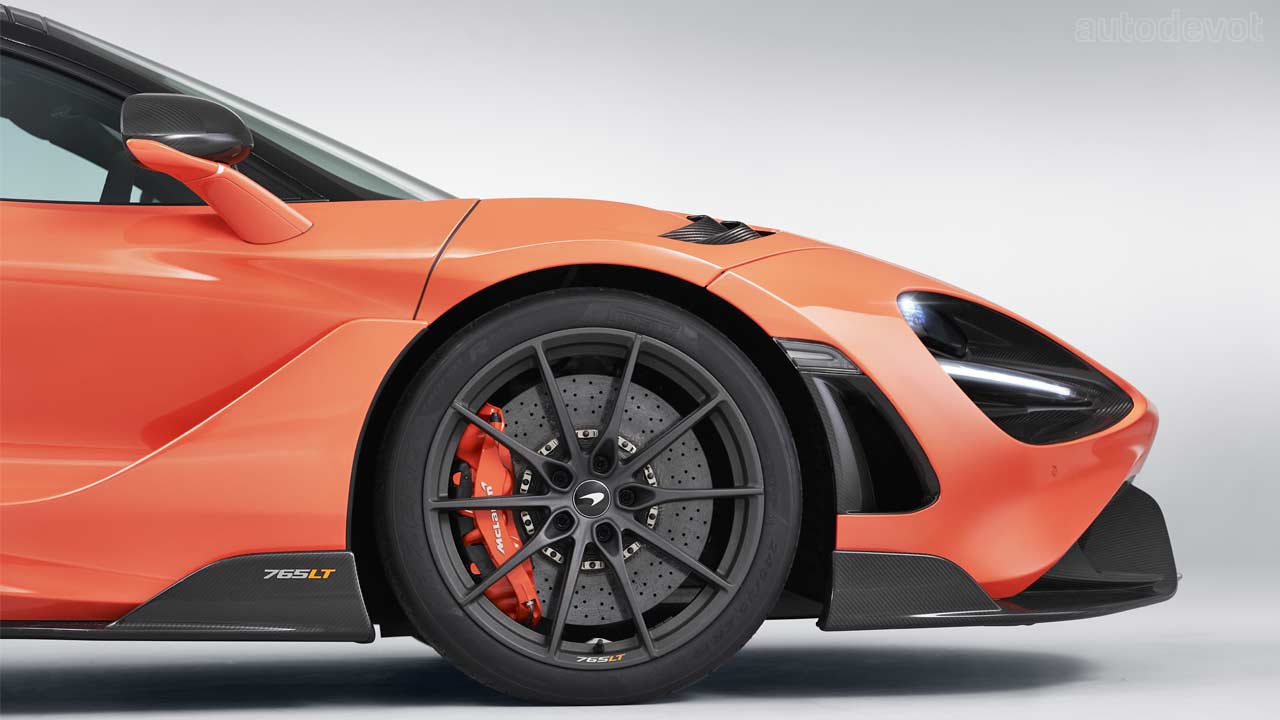 Brakes are carbon-ceramic discs (F: 390 mm R: 380 mm) with calipers from the Senna. The F1-inspired integrated caliper cooling delivers cool air to the front calipers and discs, reducing brake pad temperatures by up to 50 degrees during track driving and ensuring both consistency of pedal feel and outright braking performance, McLaren said.

Buyers can also opt for carbon-ceramic discs from the Senna and bespoke LT brake pads. 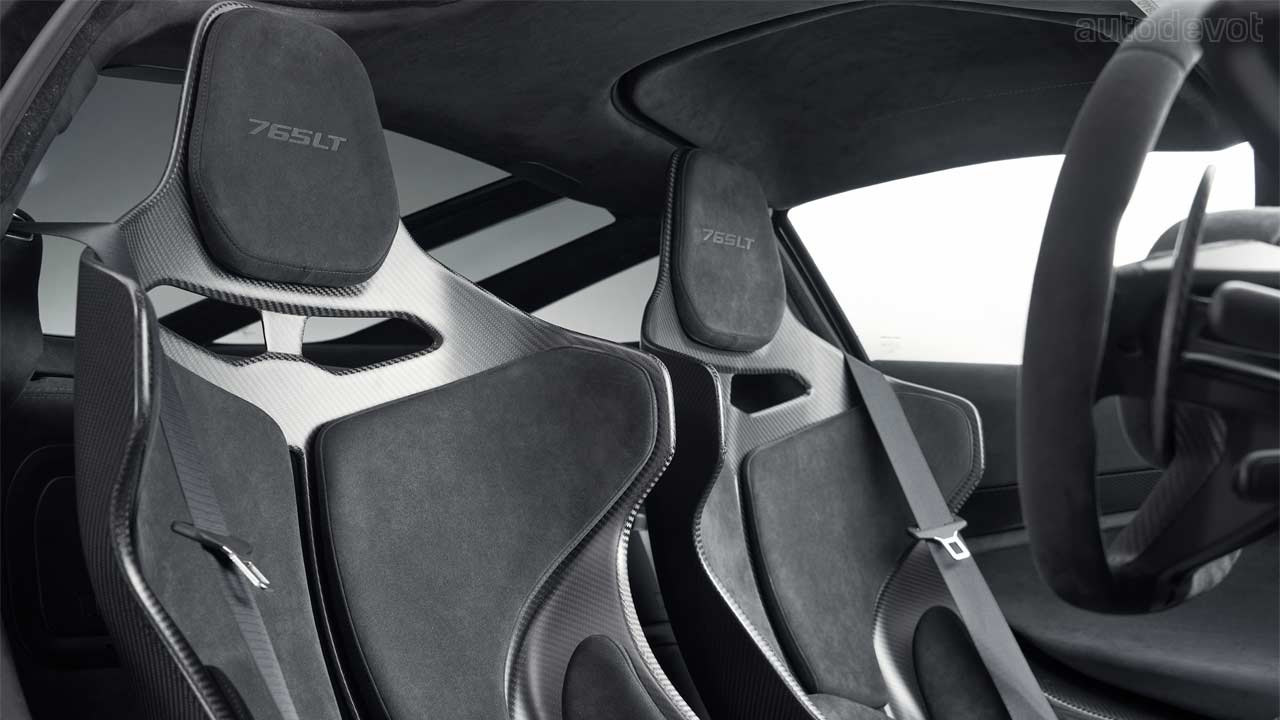 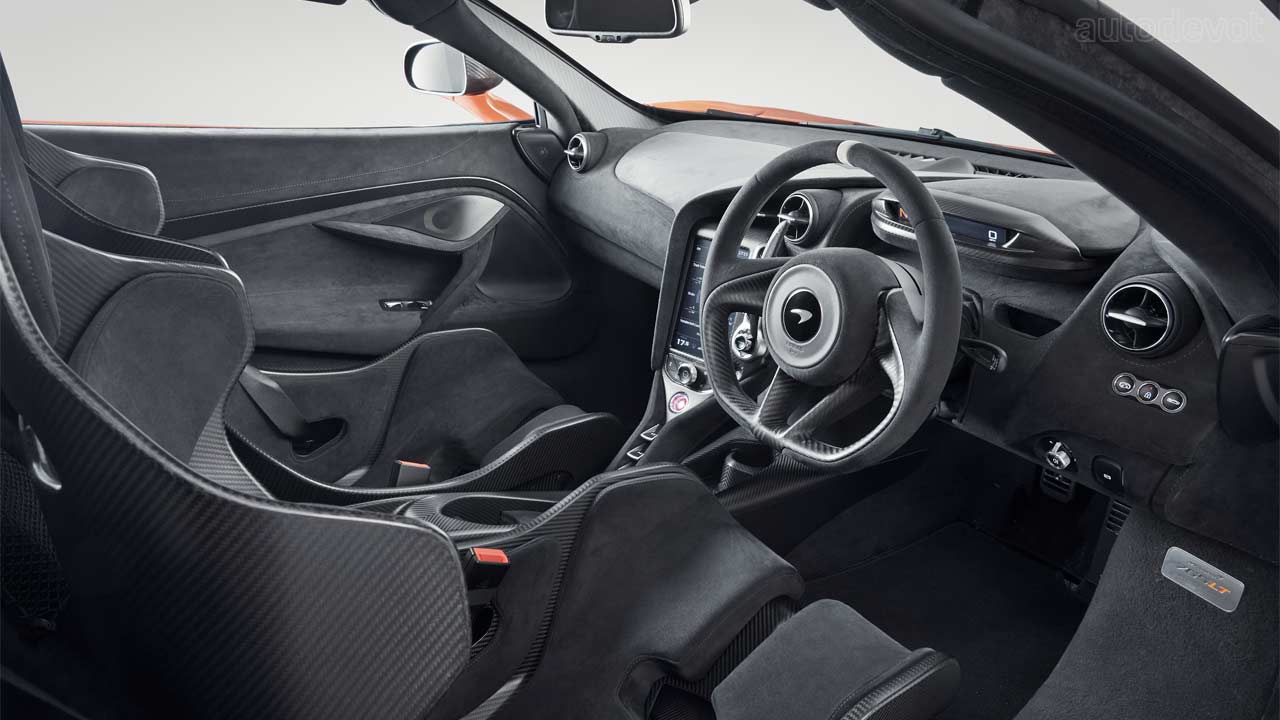 Alcantara is used extensively inside the cockpit and there is no carpeting on the floor. Door stowage nets replace hinged door pockets, and reach and rake adjustment on the steering wheel is manual. Air Conditioning and an audio system are deleted as standard, although both can be optioned at no additional cost.

The weight reduction obsession doesn’t stop there. The pinion and crown wheel within the transmission final drive are formed from 20NiCh, a high-performance nickel chrome that is more commonly used within F1 rather than road cars but is said to provide an ideal balance of weight and specification for the 765LT’s transmission. Even the lithium-ion battery is lightweight, saving 3.0 kg (6.6 lbs) over the battery fitted to the 720S.

The Proactive Chassis Control II suspension introduced with the 720S features updates to both software and hardware; gets revised suspension system algorithms learned from the development of the Senna and Speedtail. 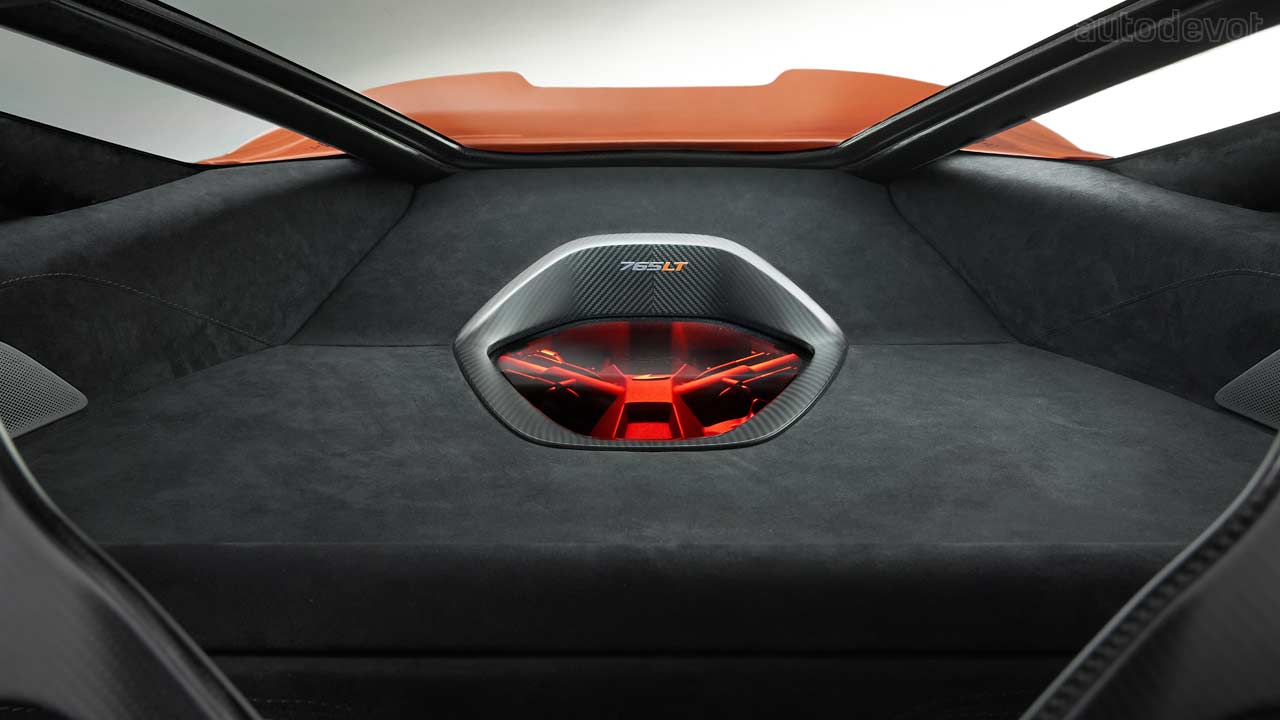 As for the business end of the story, the M840T 4.0-litre (3,994 cc) twin-turbo V8 engine produces 563 kW (765 metric hp) at 7,500 rpm and 800 Nm (590 lb-ft) of torque at 5,500 rpm. Transmission is a 7-speed Sequential Shift Gearbox (SSG). It gets a new ‘limit downshift’ function — a rev-matching feature. Previously, a downshift would be refused by the SSG if the resulting change would over-rev the engine. Also, the transmission gearing is said to be optimized for throttle response, offering 15% quicker in-gear acceleration than a 720S. 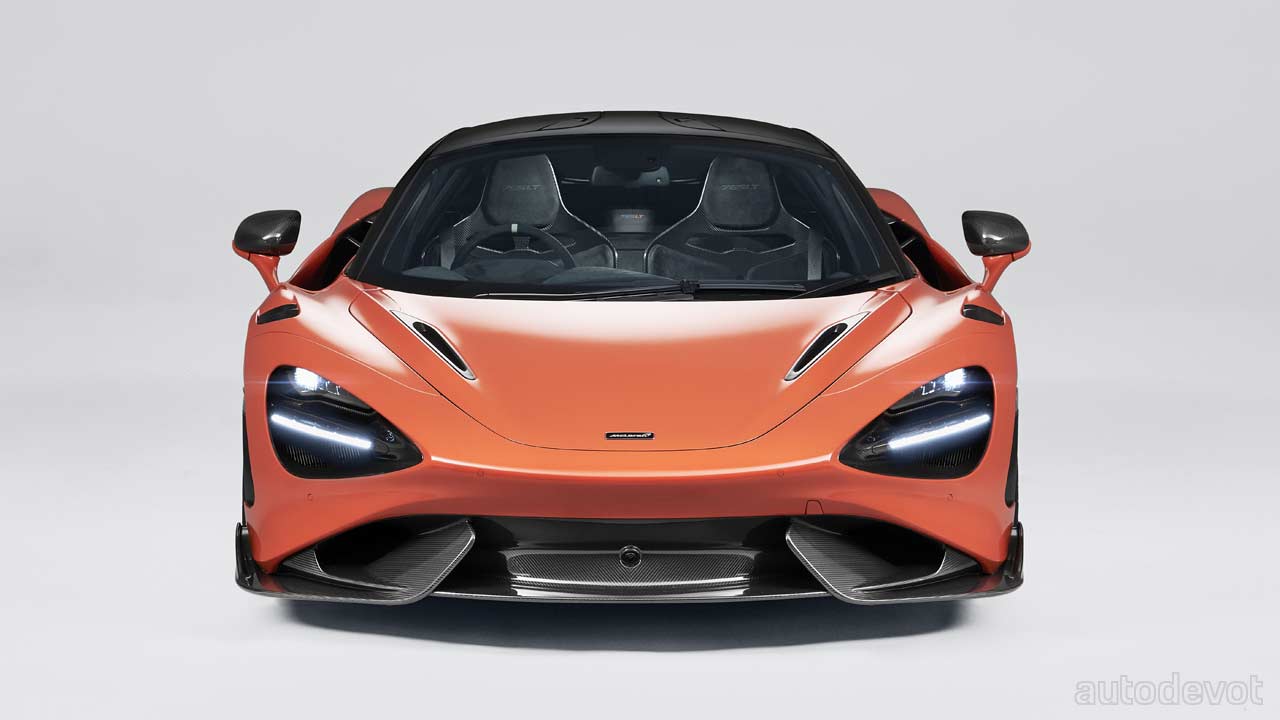 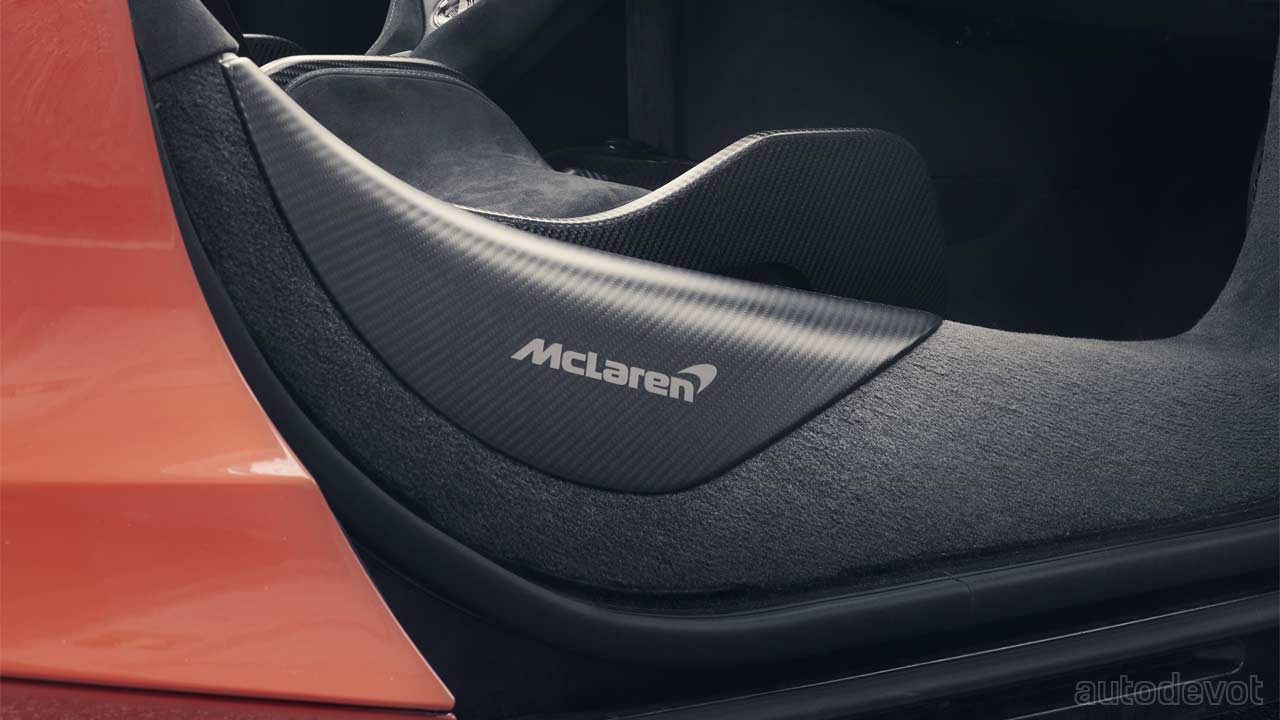 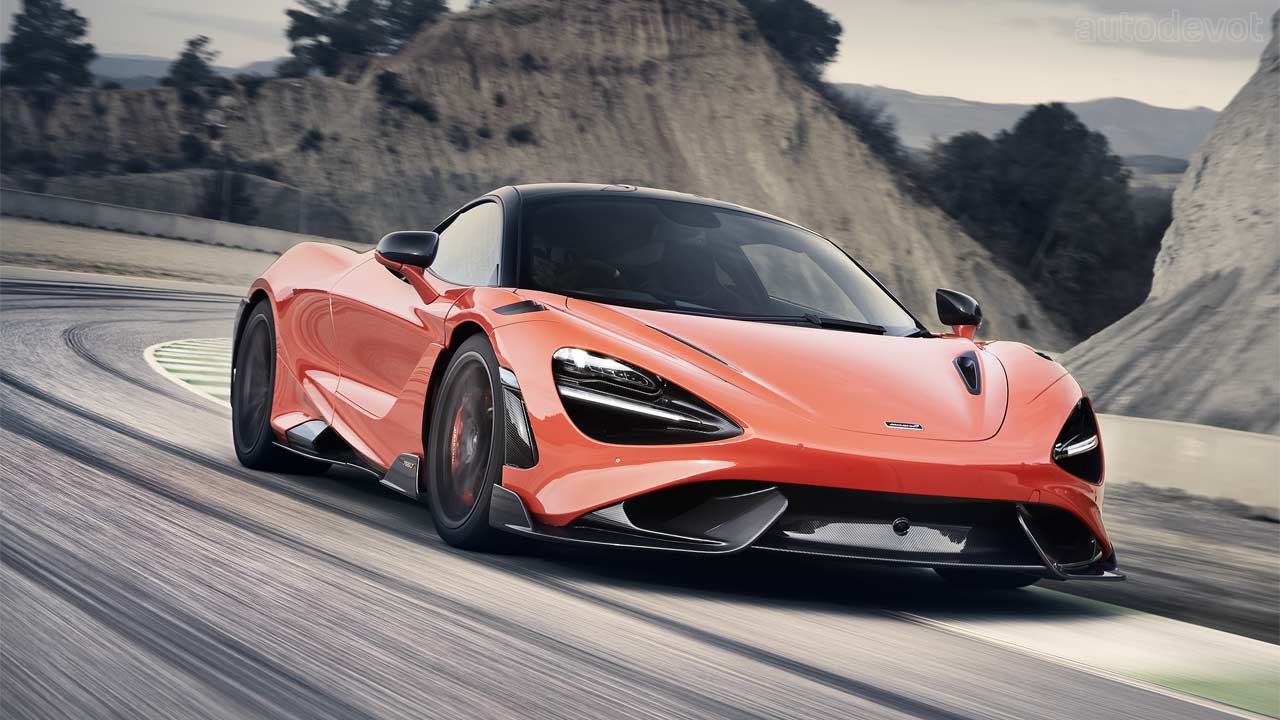 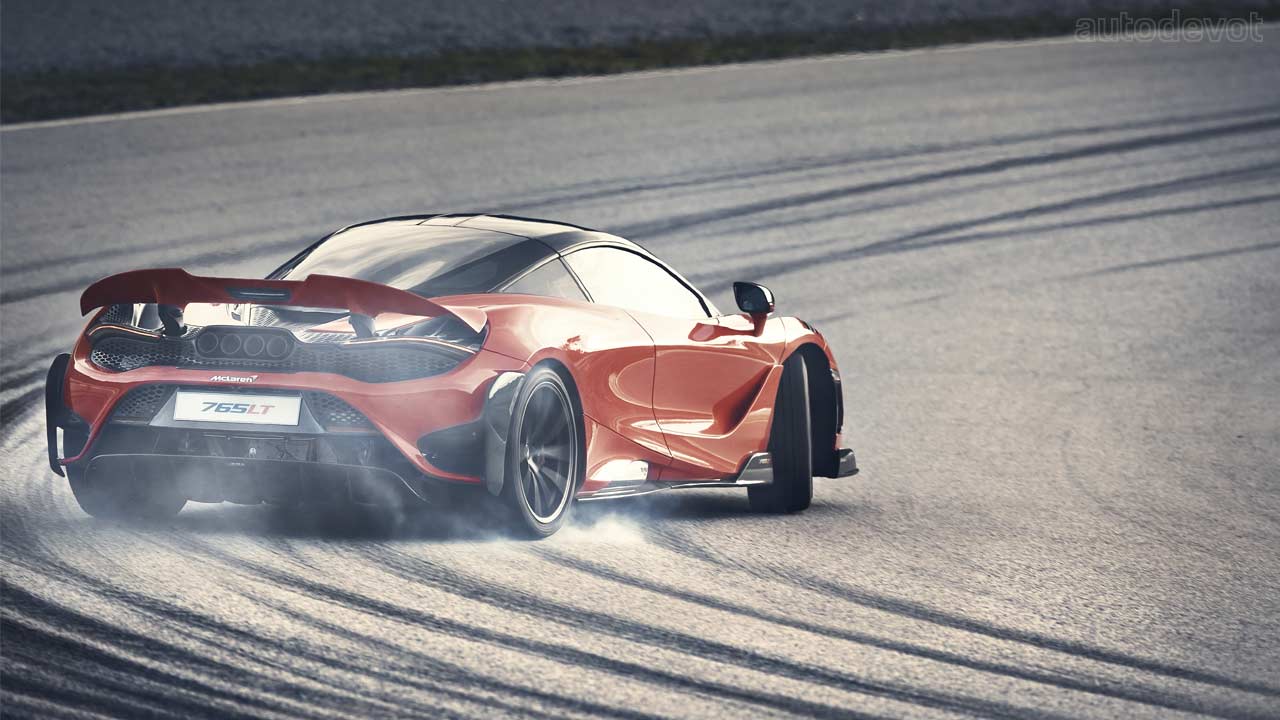 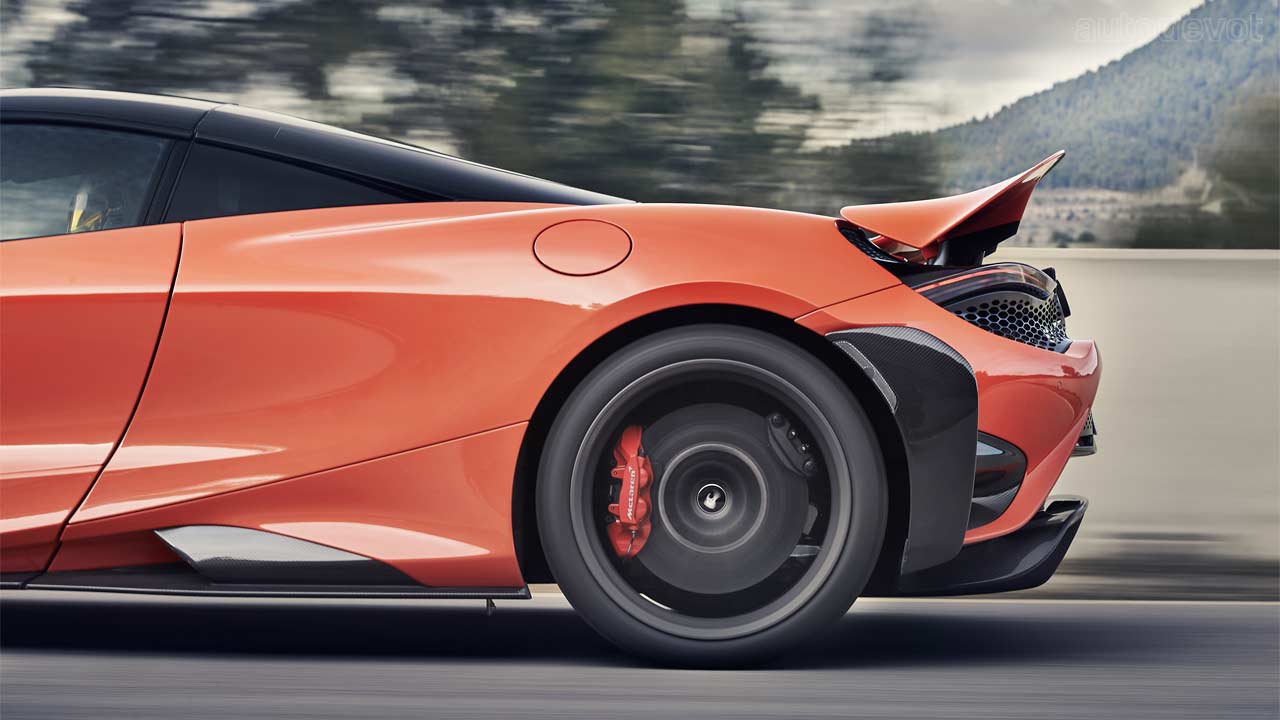 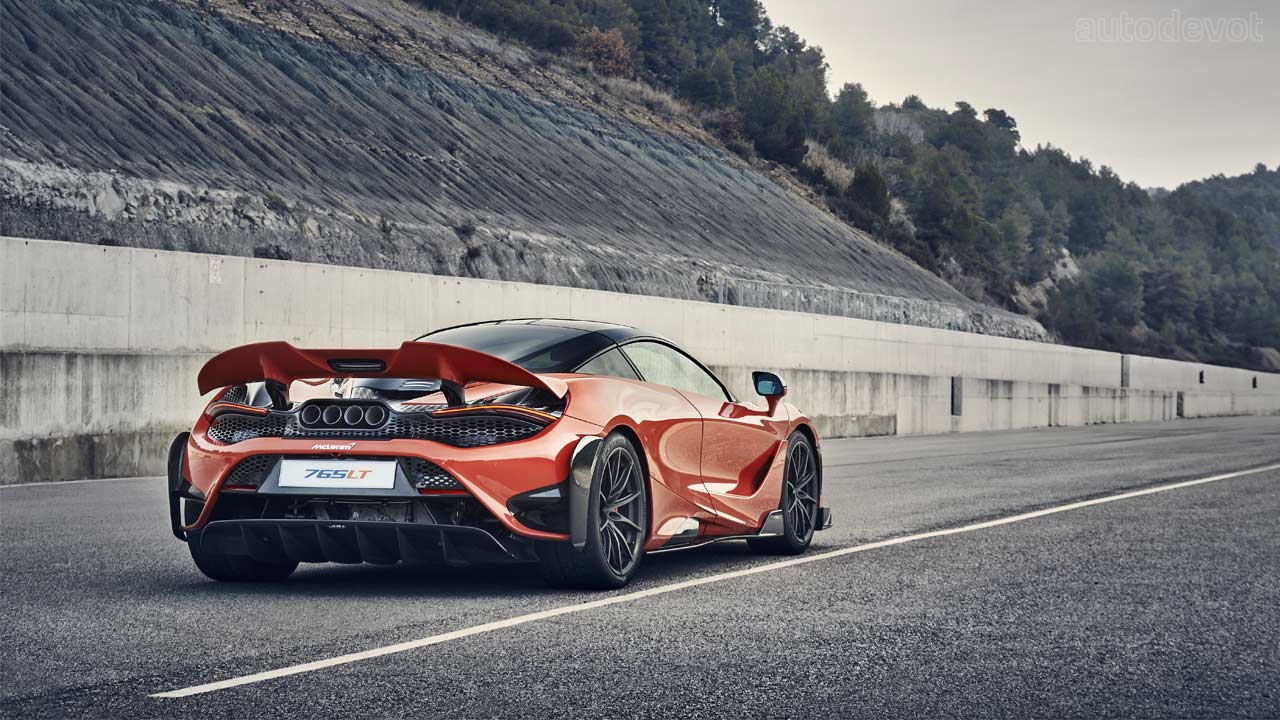