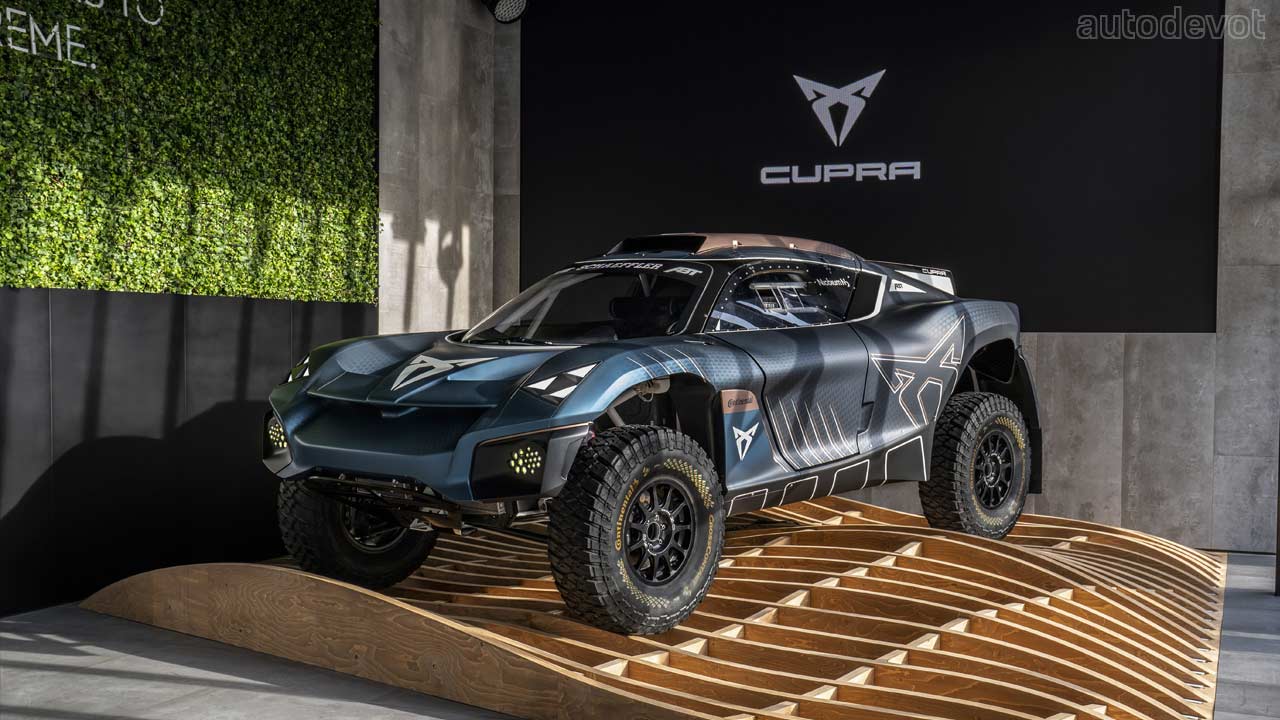 Cupra has re-used the ‘Tavascan’ nameplate for an all-electric off-road race car concept for the Extreme E series, showcased at the 2021 IAA Mobility in Munich. You probably remember, the Tavascan was showcased as an all-electric coupe-SUV concept a year ago. According to Cupra, the Tavascan Extreme E Concept is a reinterpretation of the e-Cupra ABT XE1 that was revealed last year; a “near-production version” if you will. 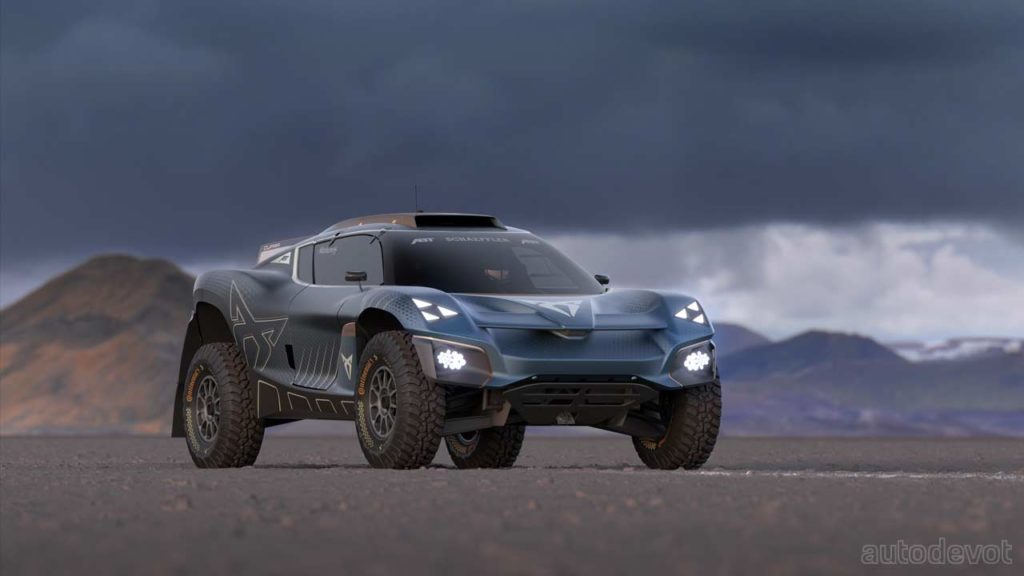 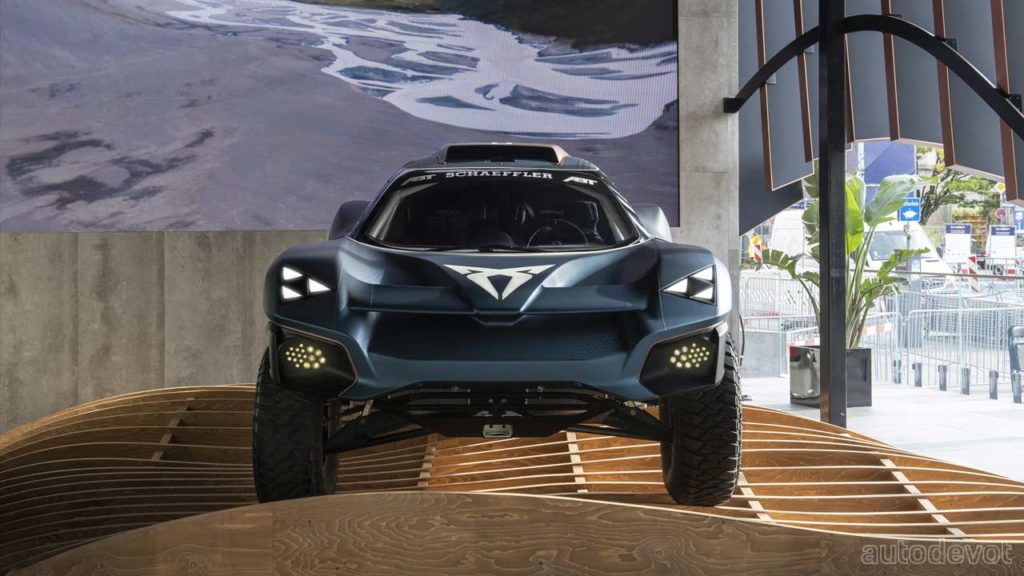 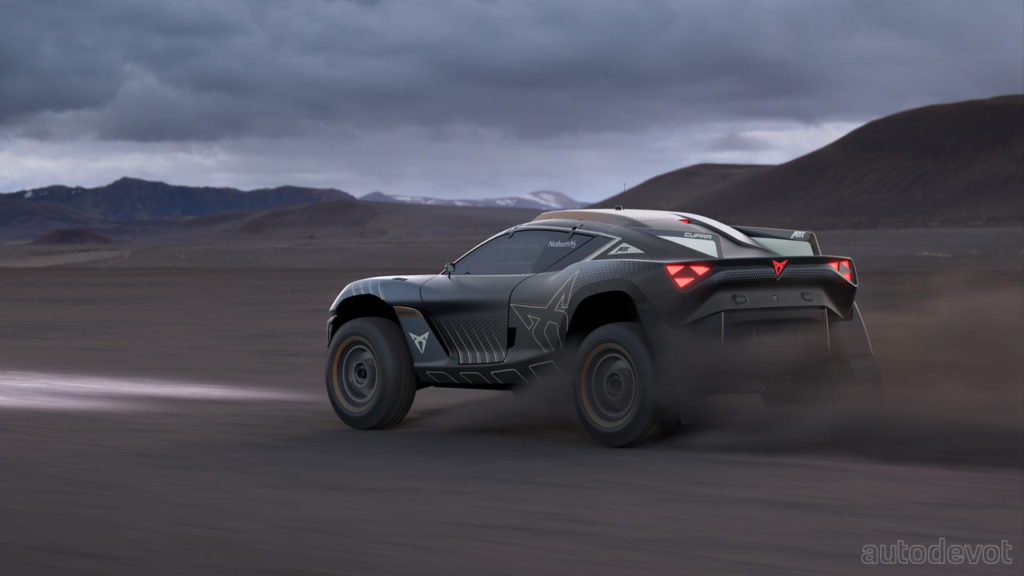 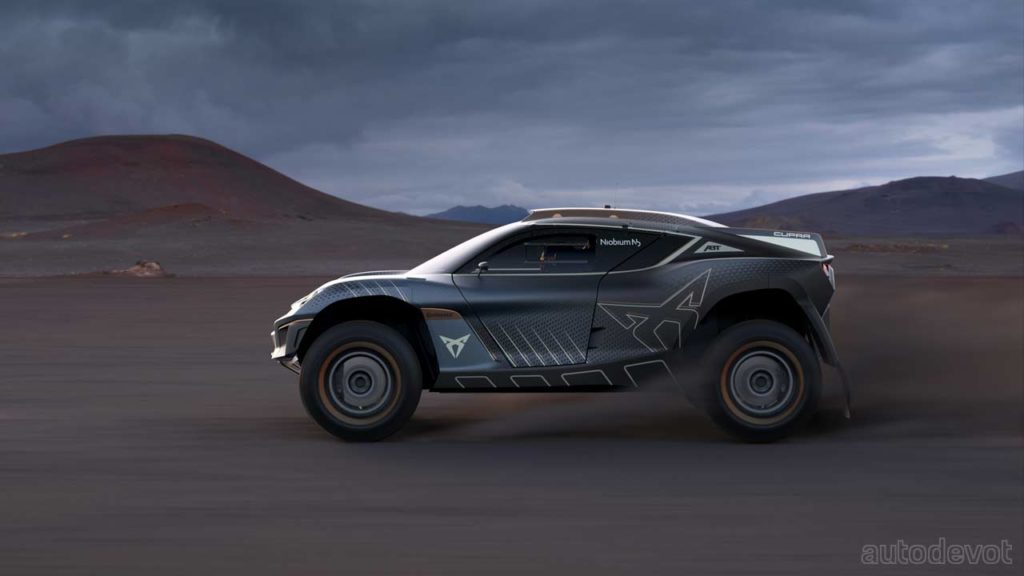 The Tavascan Extreme E concept looks nothing like the Tavascan we saw last year. What it reminds us, however, is the Audi RS Q e-tron Dakar Rally car. But of course, the RS Q e-tron packs a series-hybrid powertrain as opposed to all-electric in the Tavascan Extreme E. Cupra didn’t share a lot of details on the powertrain, but just said that the concept packs a 54 kWh battery behind the cockpit for a proper rear weight distribution, and the vehicle can do 0-100 km/h (62 mph) sprint in about 4 seconds. Which means the 400 kW (544 metric hp) output will most likely remain unchanged. But the real highlight of the concept is the material used for its construction. 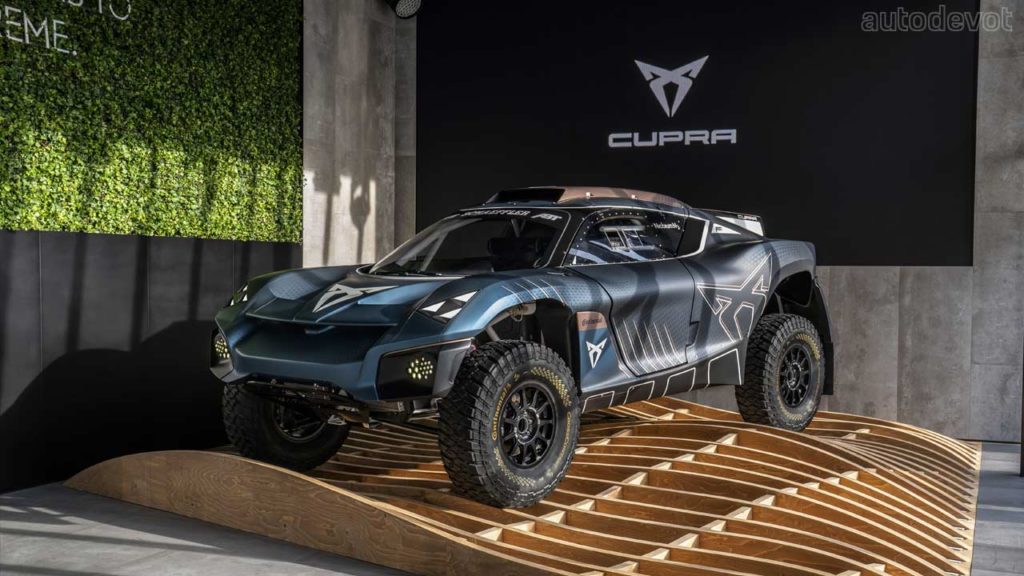 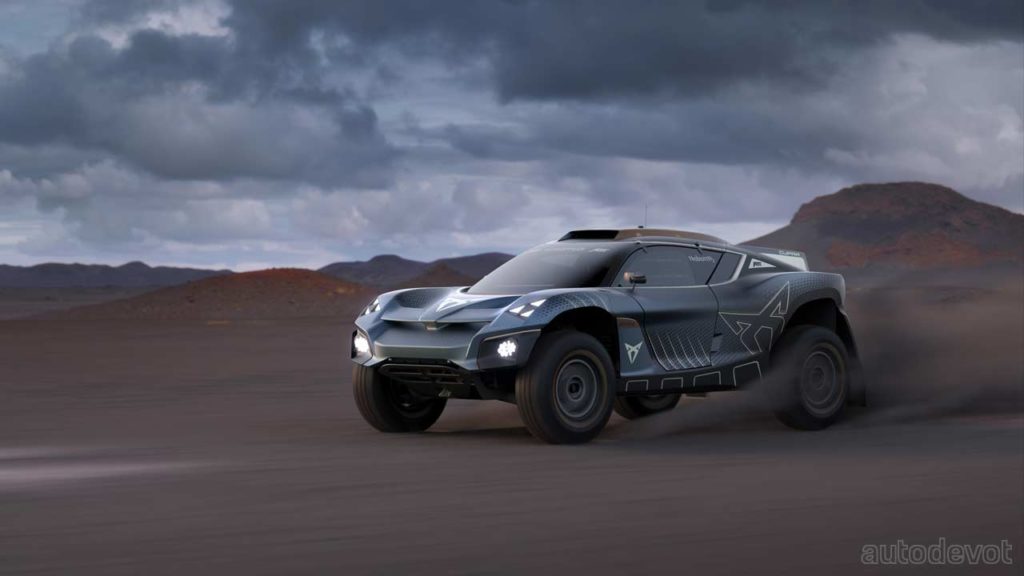 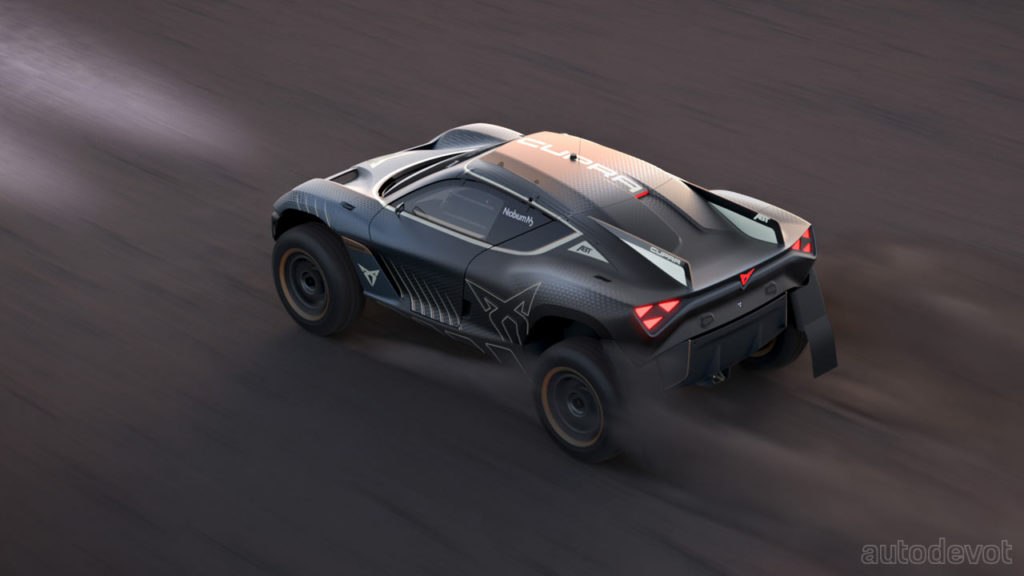 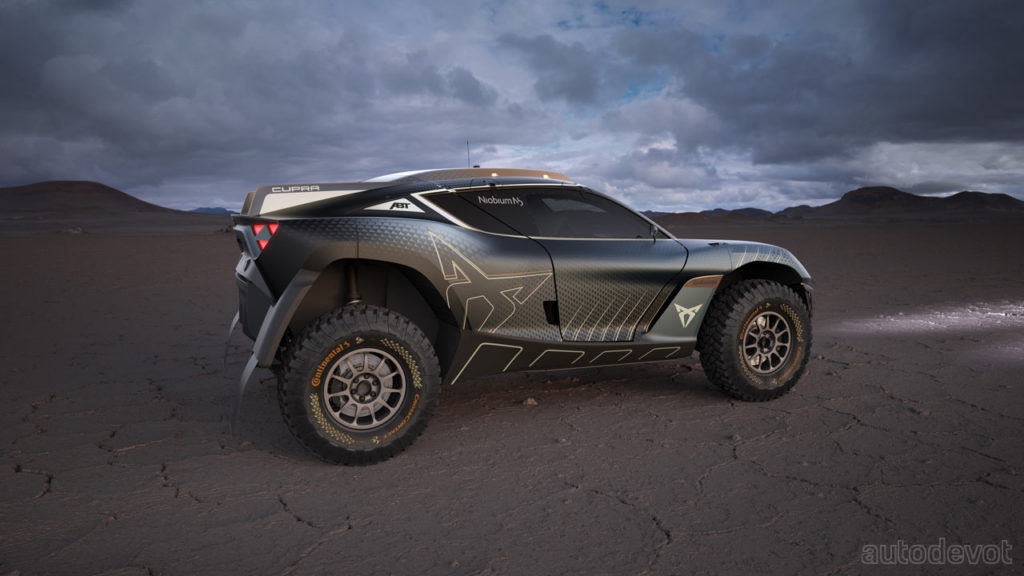 Flax fibres—extracted from the flax plant—are used throughout the concept’s body structure, as an alternative to carbon fibre. Cupra claims that there’s no detriment to performance; the material can be worked in the same way, achieving the same shapes and radii required by engineers. And apparently, the technology could easily be adapted to production vehicles.

The Cupra Tavascan Extreme E Concept is looking incredible and in addition to being fully electric, it is now even more sustainable, using recyclable and organic materials such as flax fibres. I cannot wait to compete with this newly designed version. – Jutta Kleinschmidt, Cupra driver

Almost exactly a year ago, we announced our partnership with Cupra and presented the design of our e-Cupra ABT XE1. Since then, we‘ve generated a lot of attention together – on and off the track. The development of the own bodywork by designers and engineers at Cupra is the next step in our close and successful collaboration. I can’t wait to see it make its racing debut in Extreme E. – Alejandro Agag, Founder and CEO, Extreme E