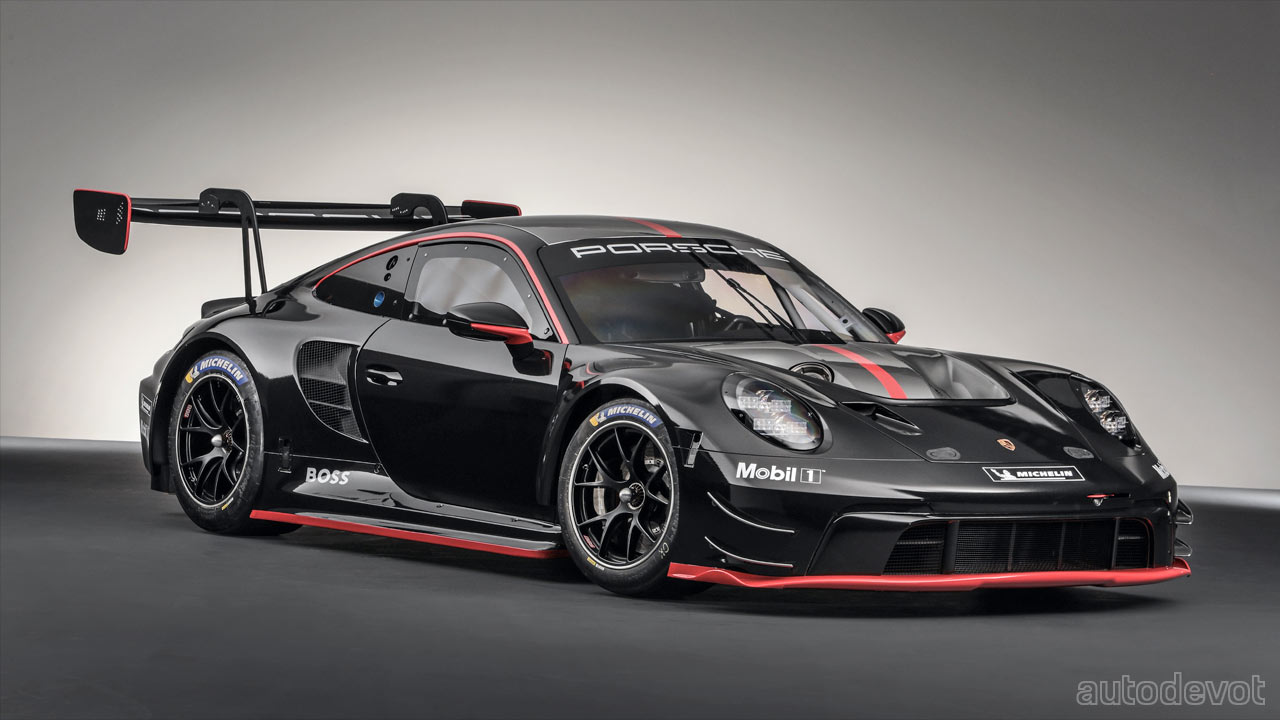 As you might know, Porsche is all set to reveal the new 992-gen 911 GT3 RS on August 17, but before that, Porsche has taken the wraps off the racing version at the 24 Hours of Spa-Francorchamps (Belgium). The new 911 GT3 R is, of course, based on the 992-gen 911, and will be ready-to-race at the beginning of the 2023 season. European pricing starts at €511,000 (excluding country-specific VAT and any optional extras). 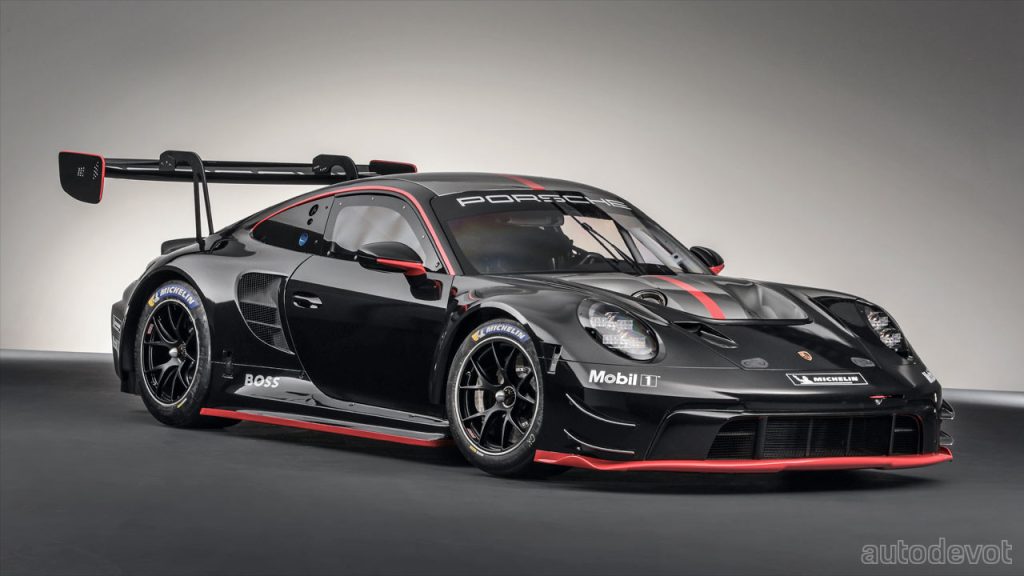 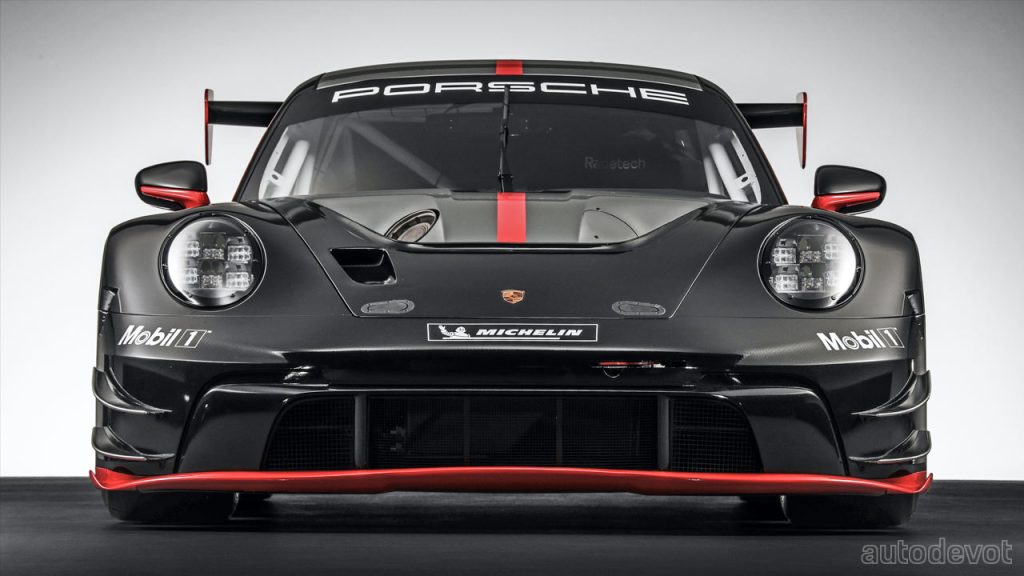 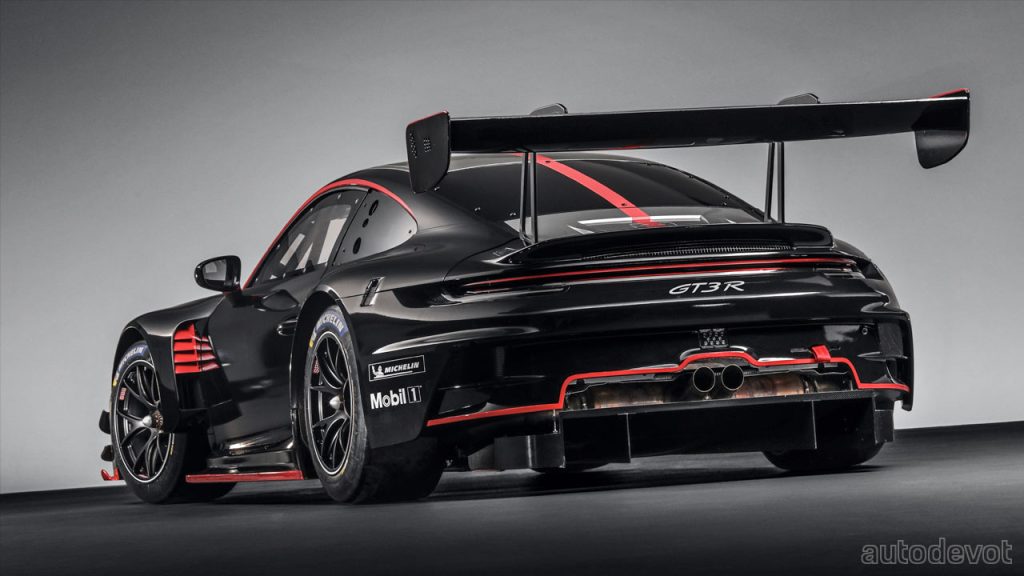 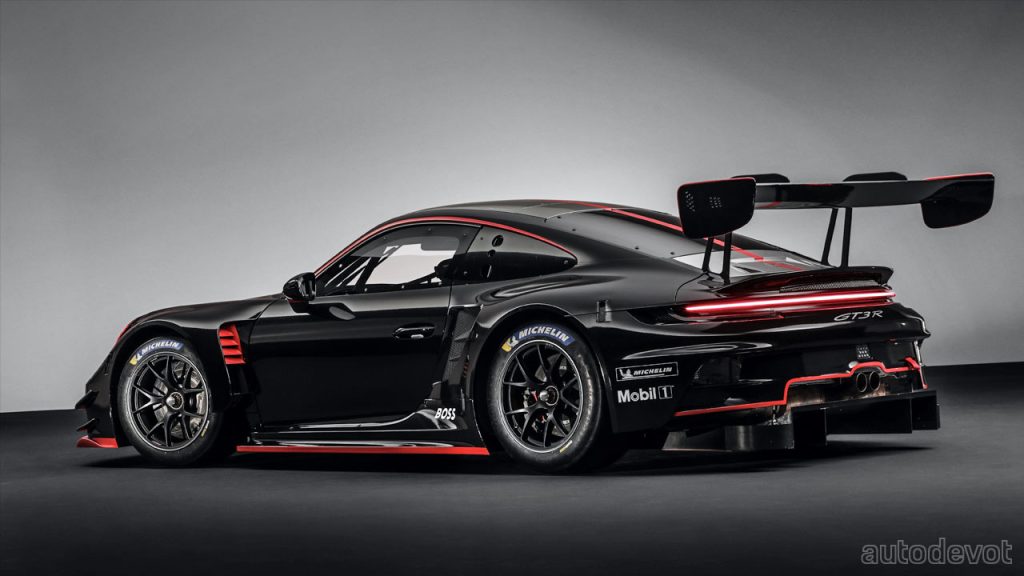 The race car carries a similar swan-neck-mounted rear wing as the road car, but the rest of the body looks nothing like the road car, obviously. Downforce has been improved with an elevated underbody at the fore of the front axle in conjunction with a smooth undertray and a rear diffuser. While the monocoque is a combo of aluminium & steel, the front & rear lids, doors, side panels, rear wing and the roof, are all made of carbon fibre. The base weight of the car is 1,250 kg (2,756 lbs).

The LED headlights on the 911 GT3 R rely on so-called collimator technology, which Porsche developed for the new LMDh 963 prototype. This device apparently works like a magnifying glass, only in reverse. It illuminates a large area of the racetrack and is claimed to be a significant improvement on the predecessor model. 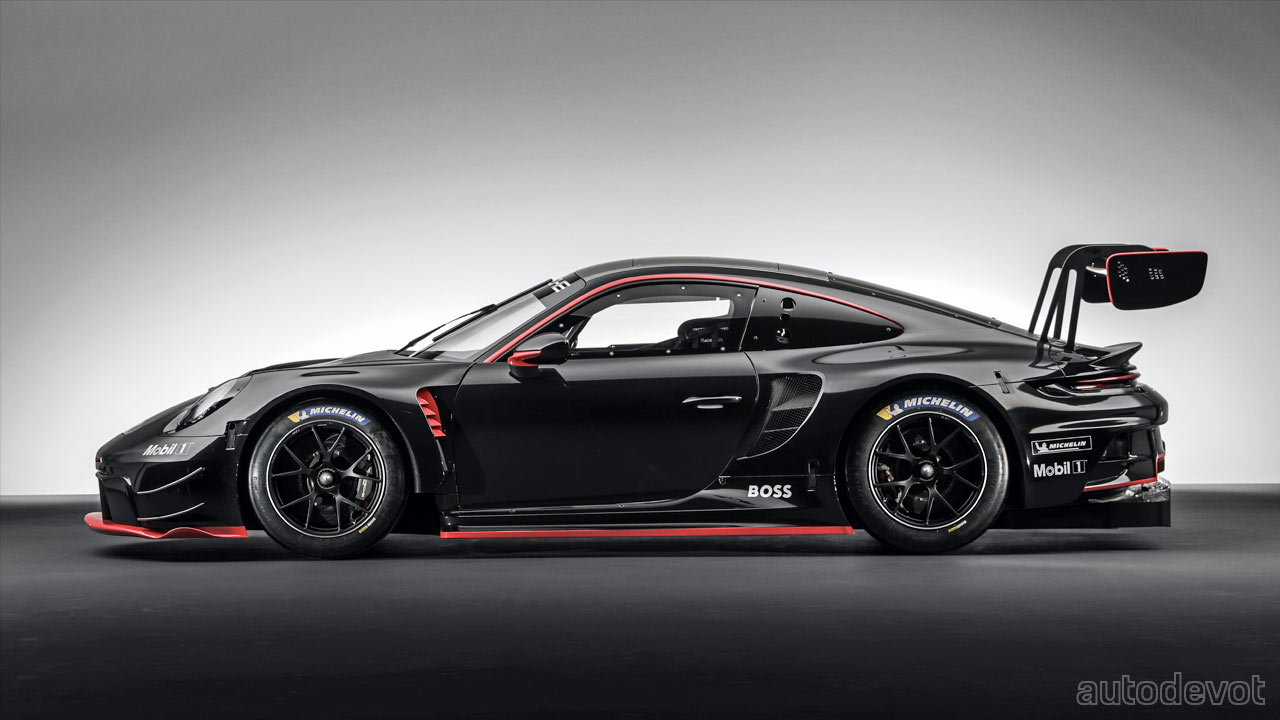 As for the suspension, Porsche said that “numerous components and technical solutions were taken from the 911 RSR“. The KW shock absorbers were further improved and offer five adjustment settings. Set-up modifications are done with so-called shims. Camber and toe on both axles are adjustable too. As for brakes, the calipers come from AP, and they grip discs measuring 390 mm at the front and 370 mm at the rear. There’s Bosch gen-5 racing ABS as well. The 18-inch rims are wrapped with Michelin 30/68-18 slicks. 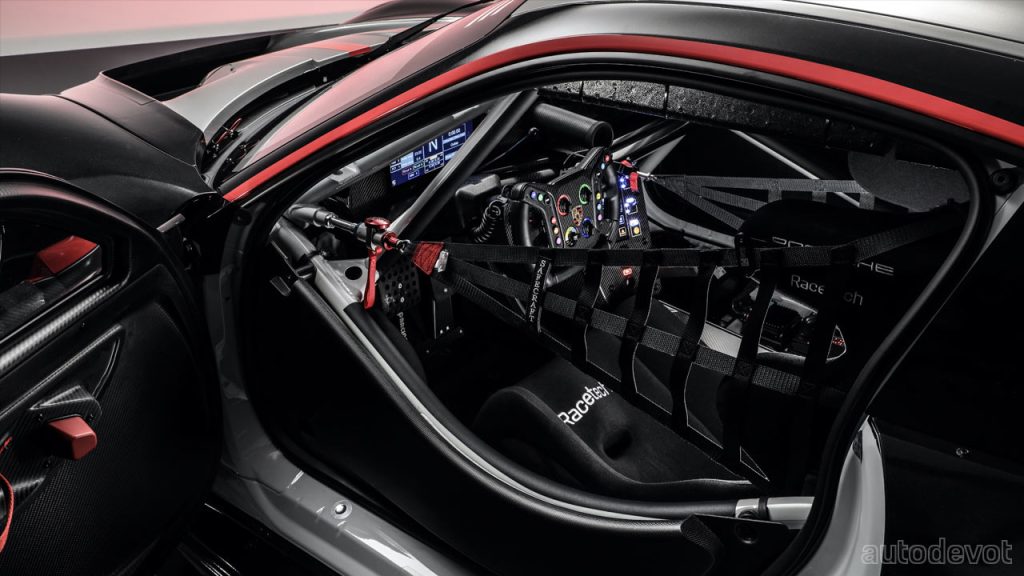 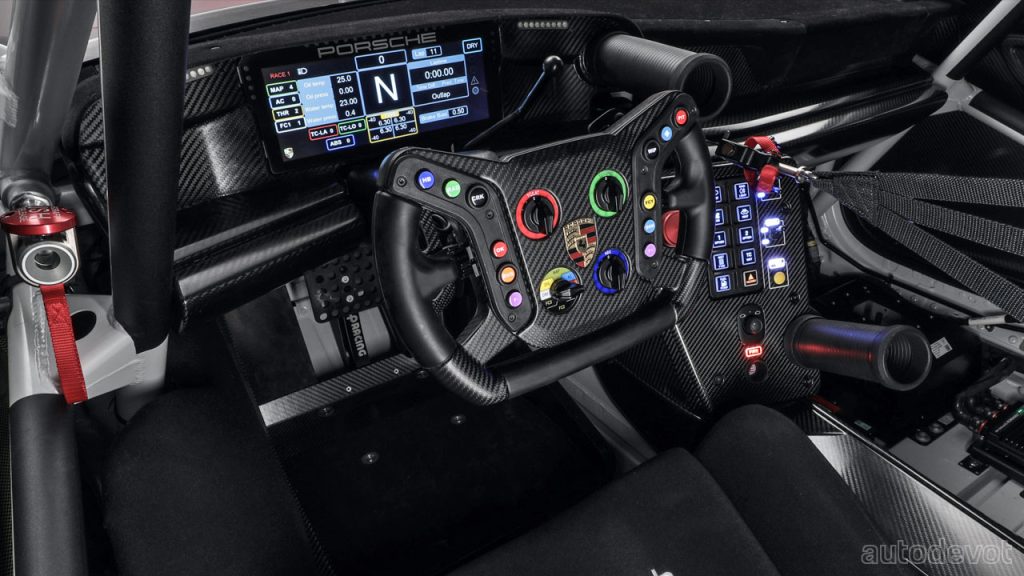 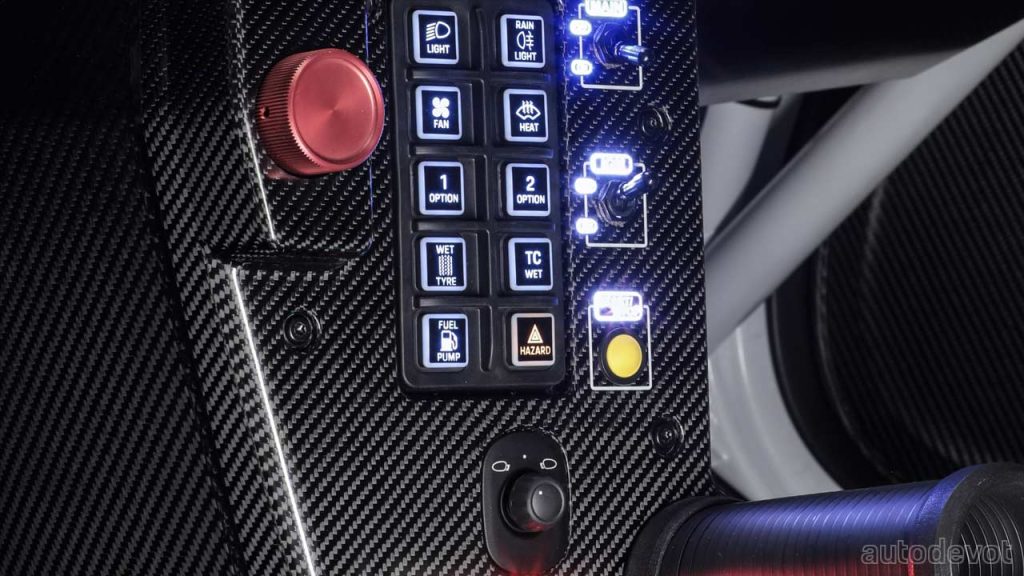 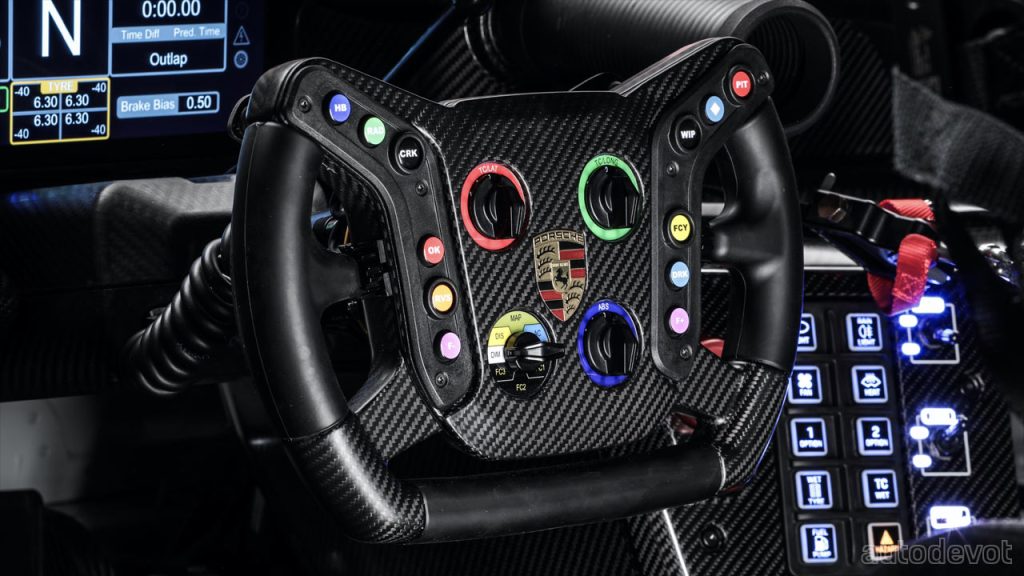 Inside, there’s a better ergonomically positioned seat with ventilation; an improved roll cage; longitudinally-adjustable steering wheel & pedals, and a 10.3-inch display. A six-point safety harness; a rescue hatch in the roof, and a fire extinguishing system with an electronic release unit are some of the other key highlights.

Compared with the outgoing 911 GT3 R, there’s a larger 4.2L (4,194 cc) water-cooled six-cylinder boxer engine this time around, revving up to 9250 rpm. The engine produces up to 416 kW (565 metric hp). Transmission is a six-speed sequential with paddle shifters.