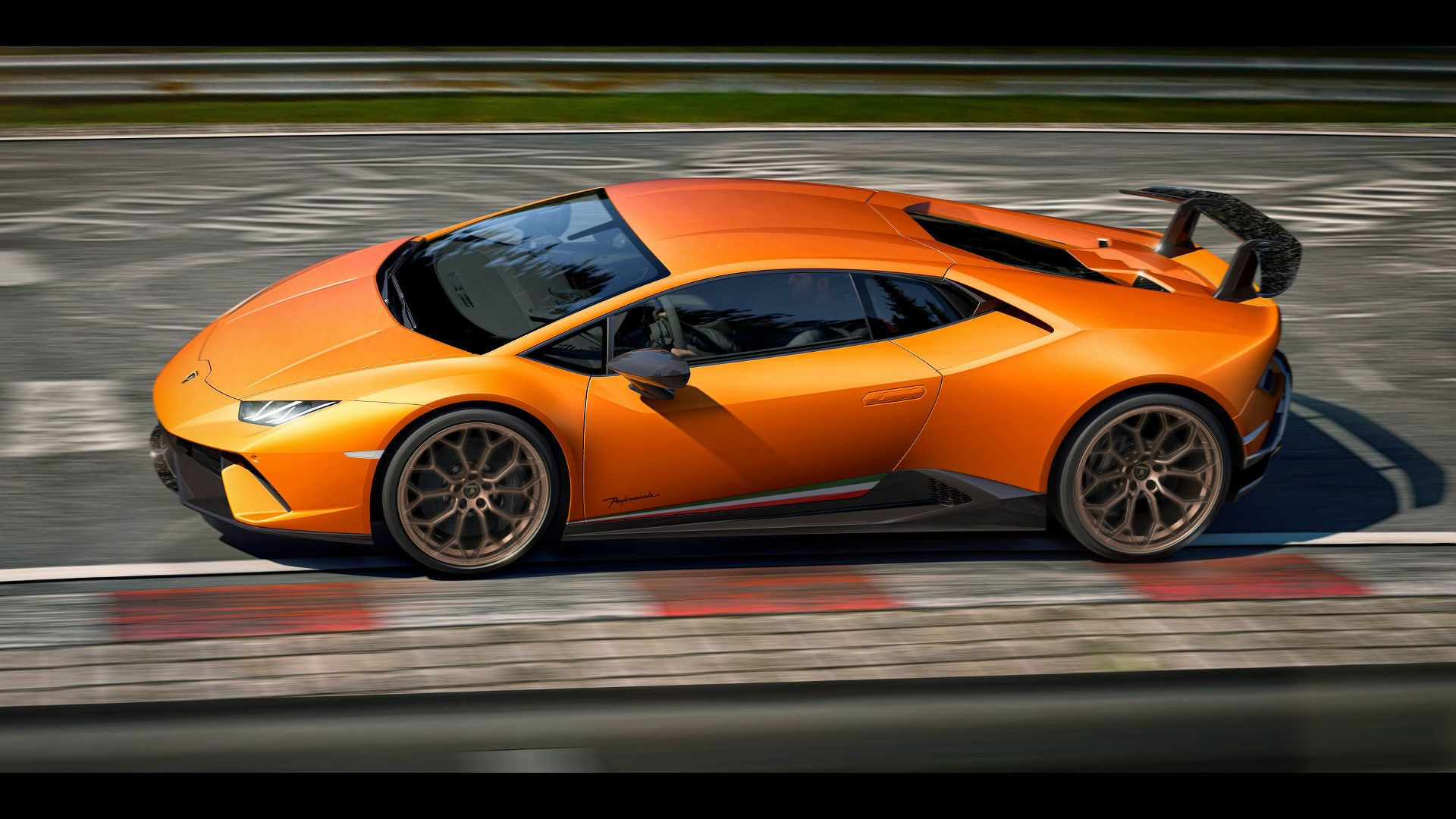 Lamborghini has unveiled the most powerful of the Huracán range – the Huracán Perfomante at the Geneva Motor Show. The Perfomante gets active aerodynamics, and weighs 40 kg less, resulting in more power, and a Nürburgring laptime of 6:52.01.

Built on a hybrid aluminum-carbon frame, the Huracán Performante’s body is made from aluminum, in conjunction with significant use of Lamborghini’s Forged Composite. Using chopped carbon fibers in a resin, Forged Composite allows the creation of lightweight and complex geometrical shapes while maintaining optimum stiffness, which is not possible with traditional carbon fiber composite materials, says Lamborghini. The Performante features Forged Composite in structural components including front and rear spoiler, engine bonnet, rear bumper and the diffuser, contributing to the car’s weight reduction of 40 kg.

ALA
The Performante adopts Aerodinamica Lamborghini Attiva (ALA) – ALA is also the Italian word for wing. Basically, its Lamborghini’s patented technology for doing active aerodynamics. The front spoiler integrates the electric motor of the front ALA system, built in a carbon forged frame with active flaps on the top exterior surface. Lamborghini’s Piattaforma Inerziale (LPI) governs all the car’s electronic systems in ‘real time’ and is integrated with the ALA, and activates the ALA system flaps in less than 500 milliseconds to ensure the best aerodynamic set-up of the car in every driving condition. When the ALA is off, the active flaps inside the front spoiler are closed, generating the desired high downforce for high speed cornering and full brake conditions. The below video gives you a clear idea.

The rear has four ducts below the bonnet. The two central ducts are always open to allow underhood ventilation and exhaust cooling, while the two external ducts are connected to the inner channels of the rear wing. The air flow through the rear wing channels is controlled by two electro-actuated flaps. Lamborghini says, the entire system is 80% lighter than a traditional hydraulic system. When ALA is off the rear flaps are closed, permitting the rear wing to act as a traditional fixed wing. Stability is enhanced in high speed cornering and full braking, by creating maximum vertical downforce, 750% more than a Huracán coupé.

For the design, Lamborghini has drawn inspiration from its Trofeo race cars, and also from naked performance motorcycles, with their exposed frames and ‘streetfighter’ structures, “which express function and performance”, says Lamborghini.

As a part of its light weight construction, Plexiglas cover has been used for the engine bay. Further explaining the design, the V10 power plant’s manifold cover in bronze, a finish used in other special edition engines such as Diablo 30th Anniversary power plant. From the side, the design is characterized by the accelerating line of the rocker cover with air intakes in matt black, the Italian tricolore colors of the Performante’s Sant’Agata Bolognese birthplace on the doors, topped with wing mirrors in shiny black. The lightweight, Narvi 20” forged wheels, dedicated to the Huracán Performante, are painted in bronze.

On the inside, air vents, paddles, door handles and the center console are created from Forged Composite. Referencing its racing heritage, lightweight, dark colored Alcantara fabric is used throughout, including on the sports seats where an optional ‘Y’ graphic can be lasered. Comfort seats with the same trim are available as an option. The infotainment supports Apple CarPlay and its iPhone apps including the Lamborghini telemetry system, which allows the driver to record, replay and study his own performance.

The Haldex fifth generation electronically controlled permanent four-wheel drive continues on the Performante too. “MagneRide” electromagnetic damper control is available as an option. 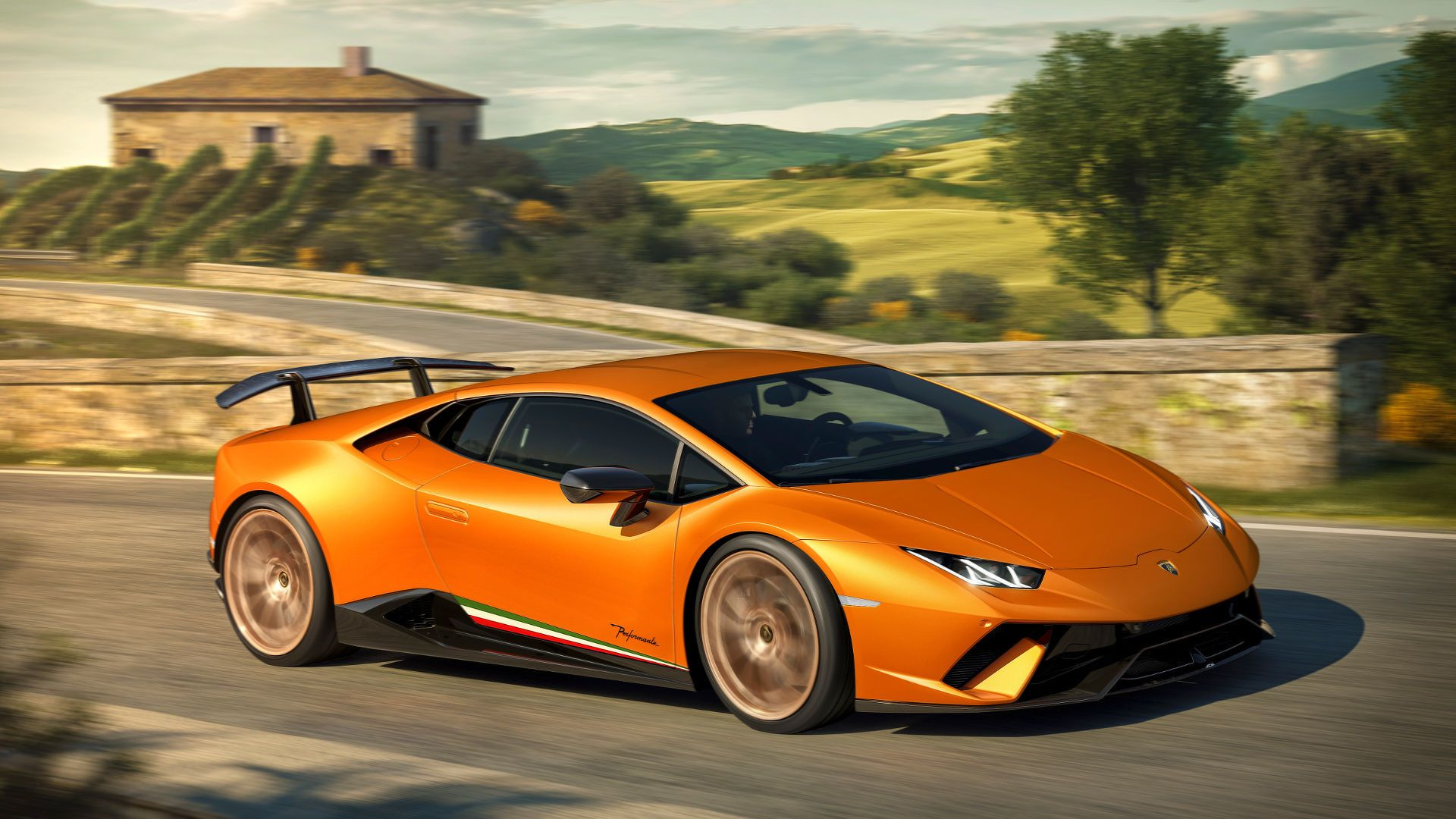 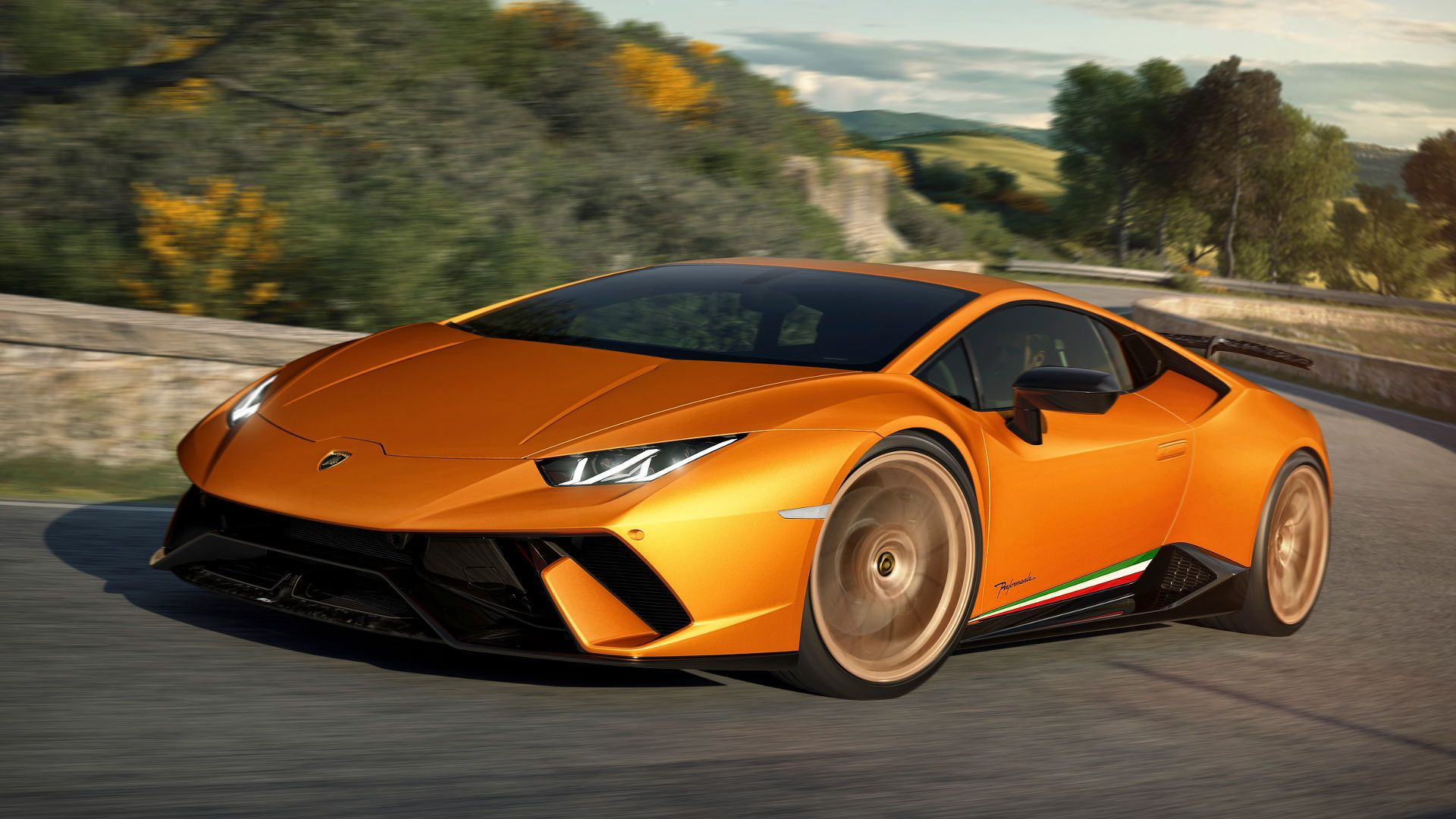 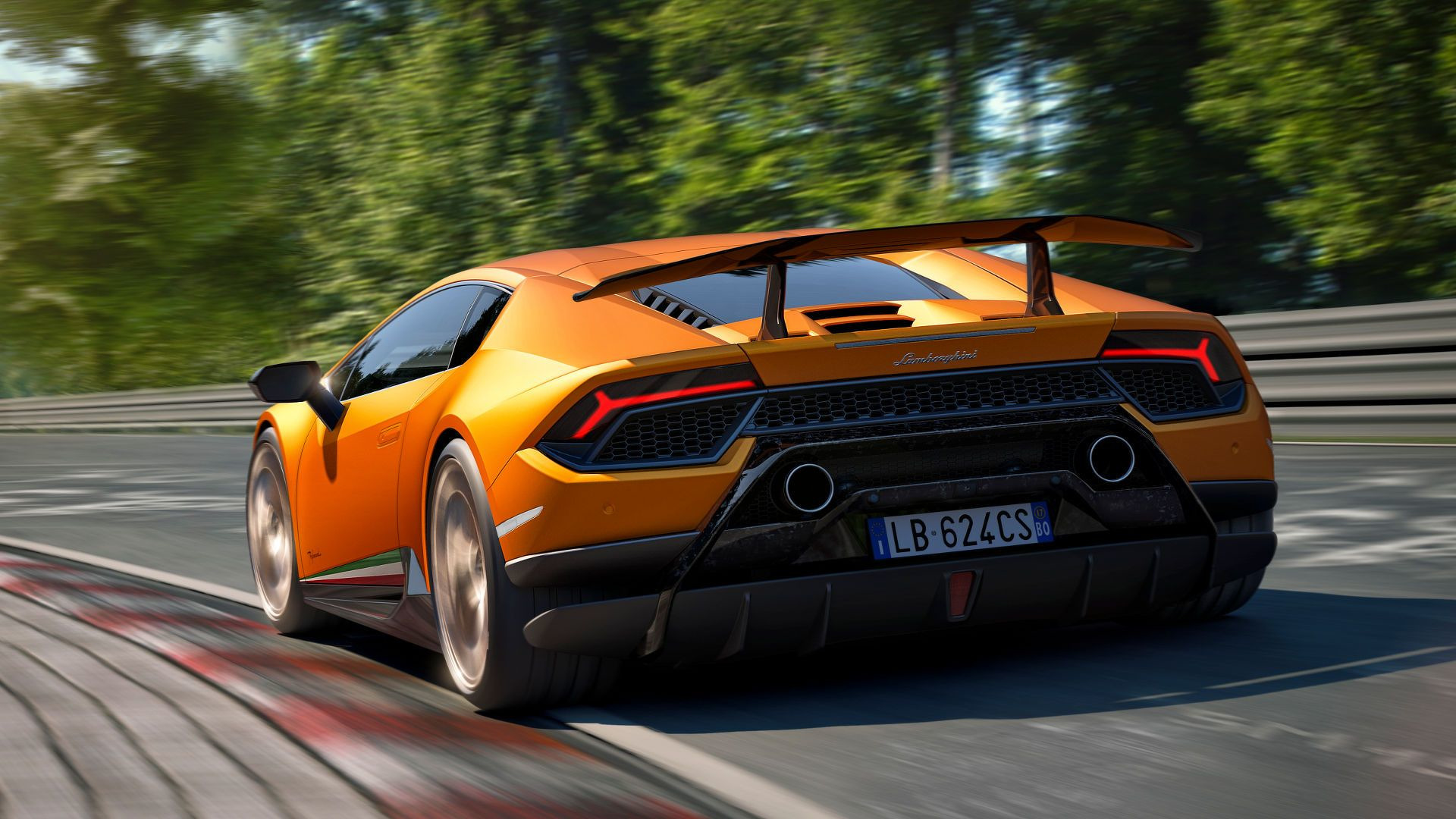 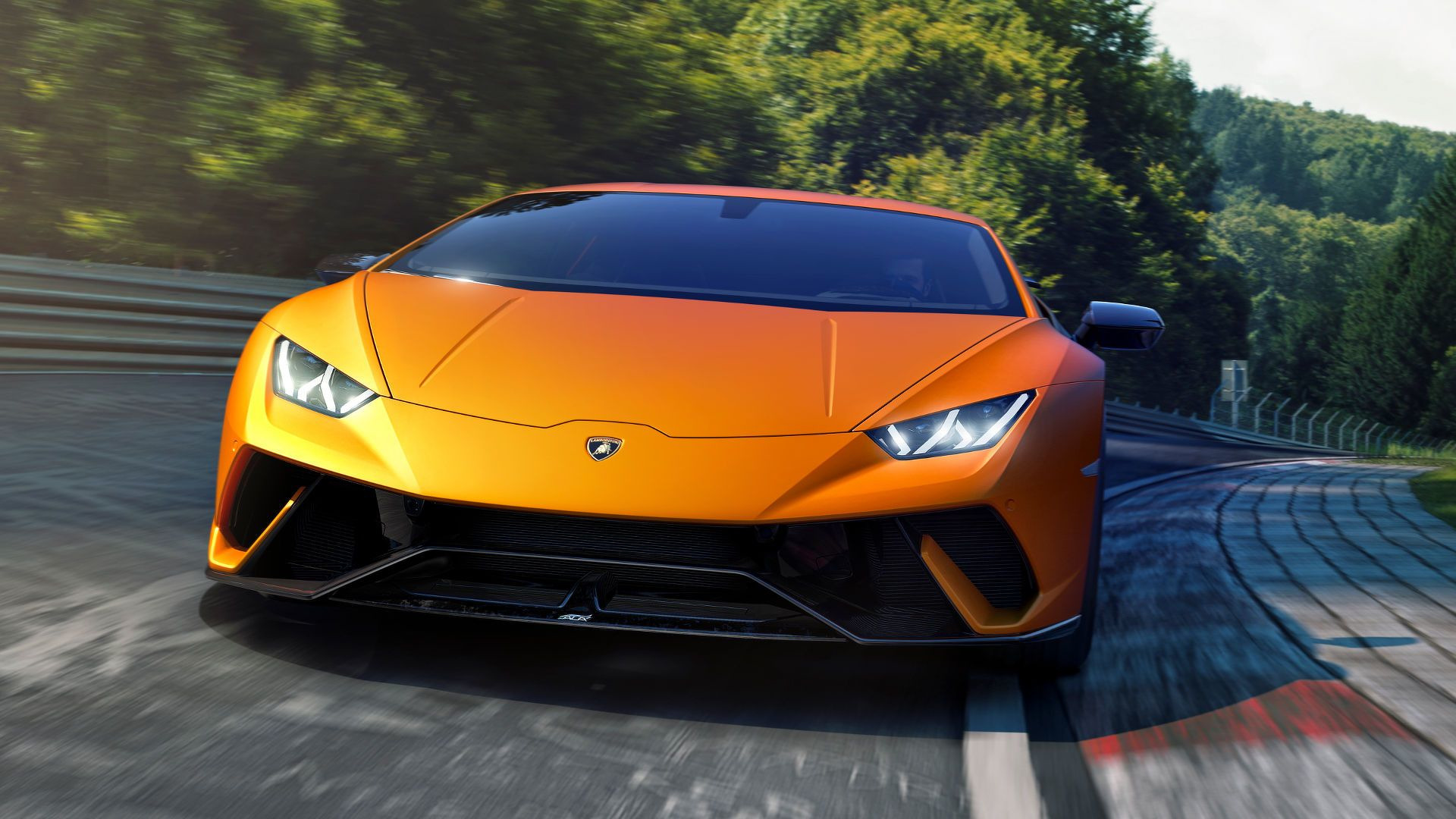 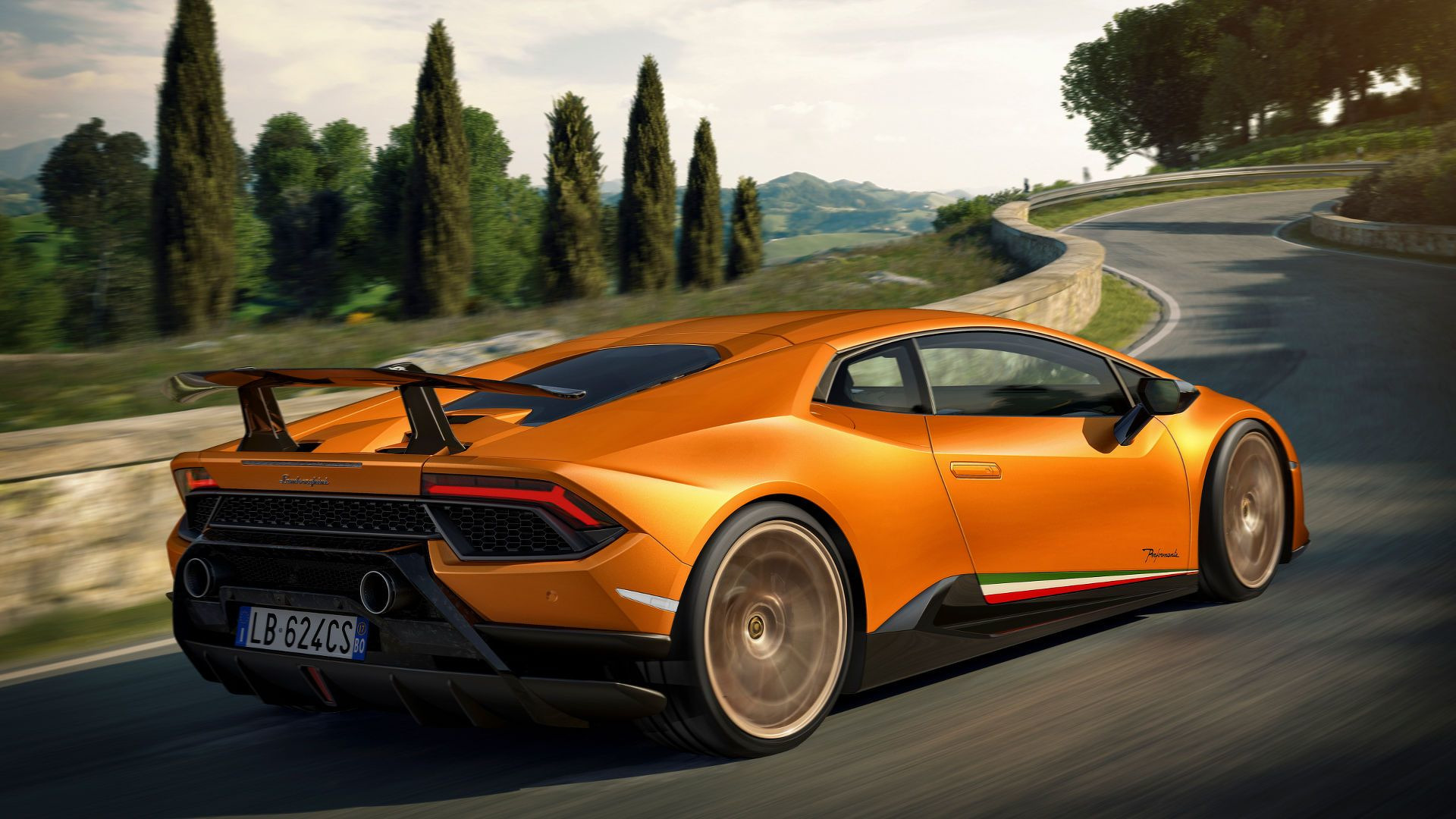 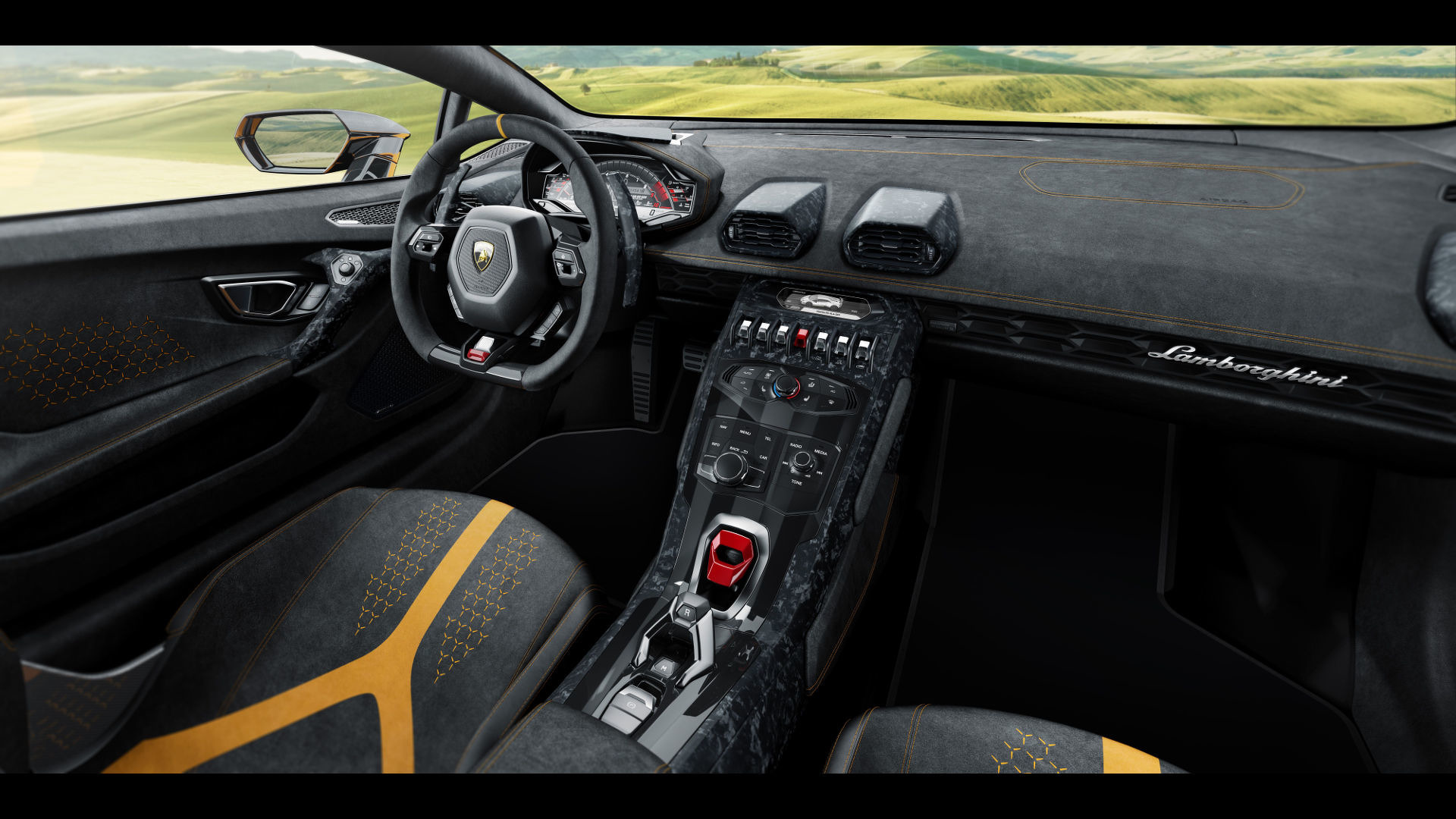 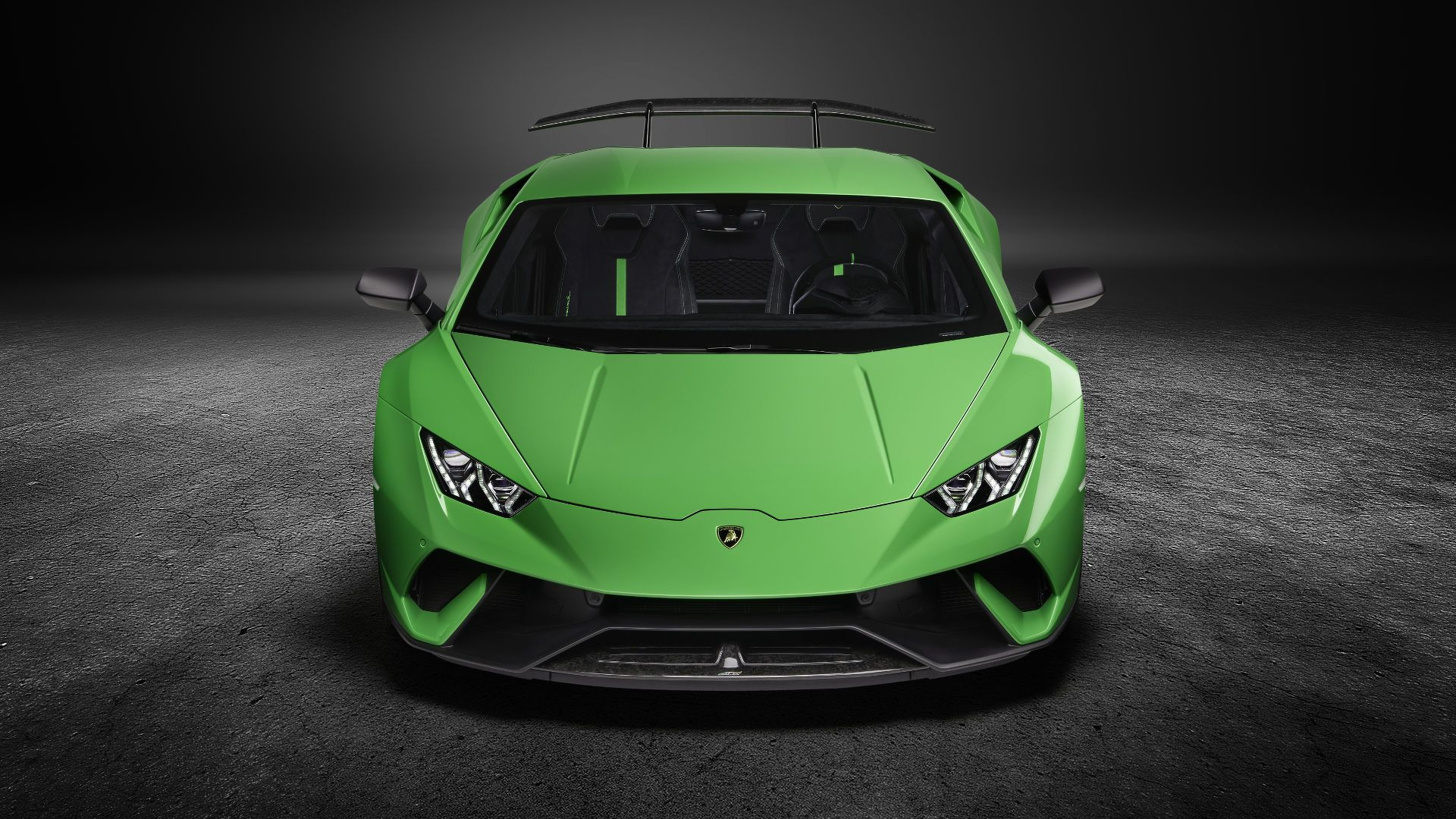 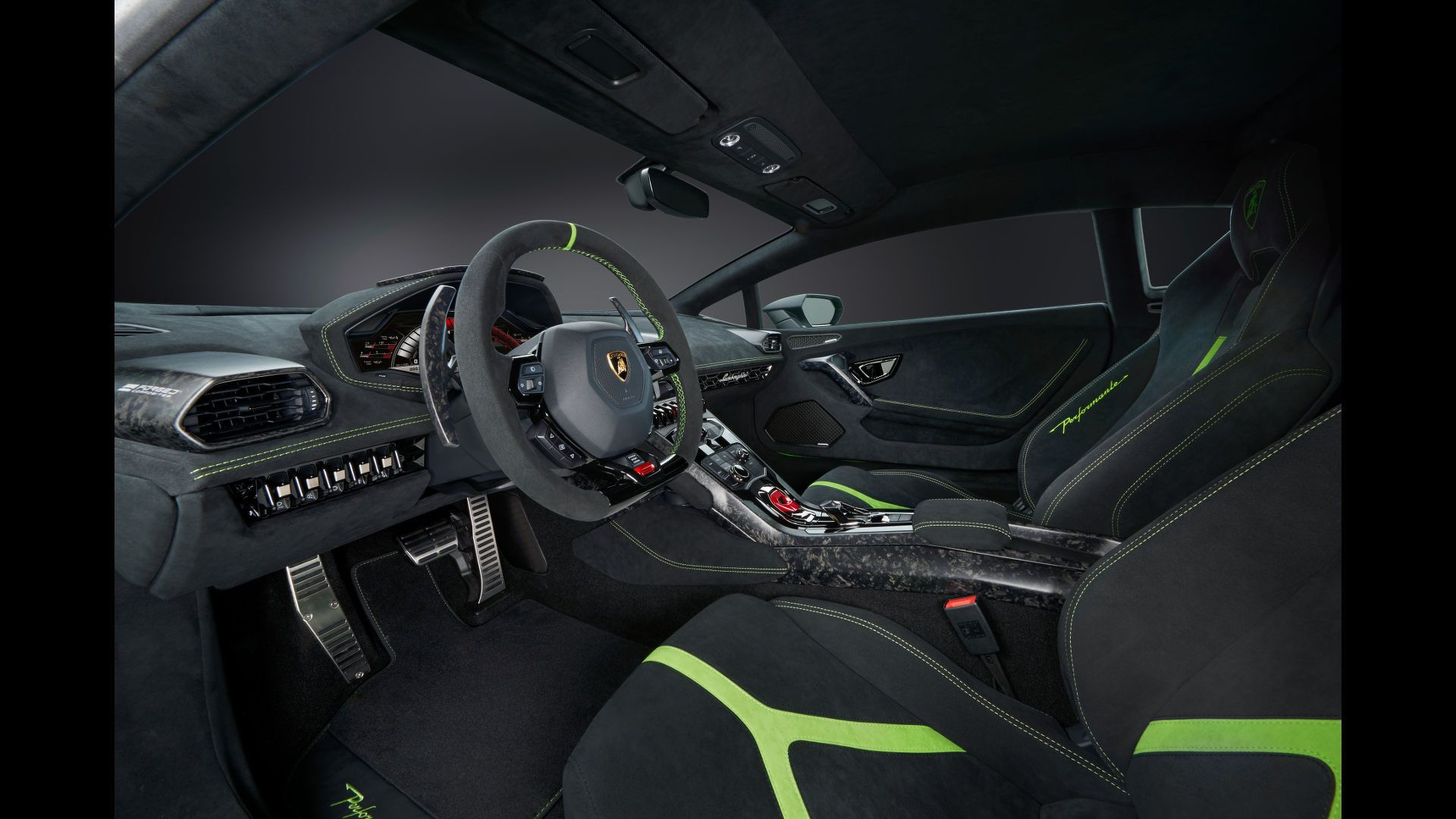 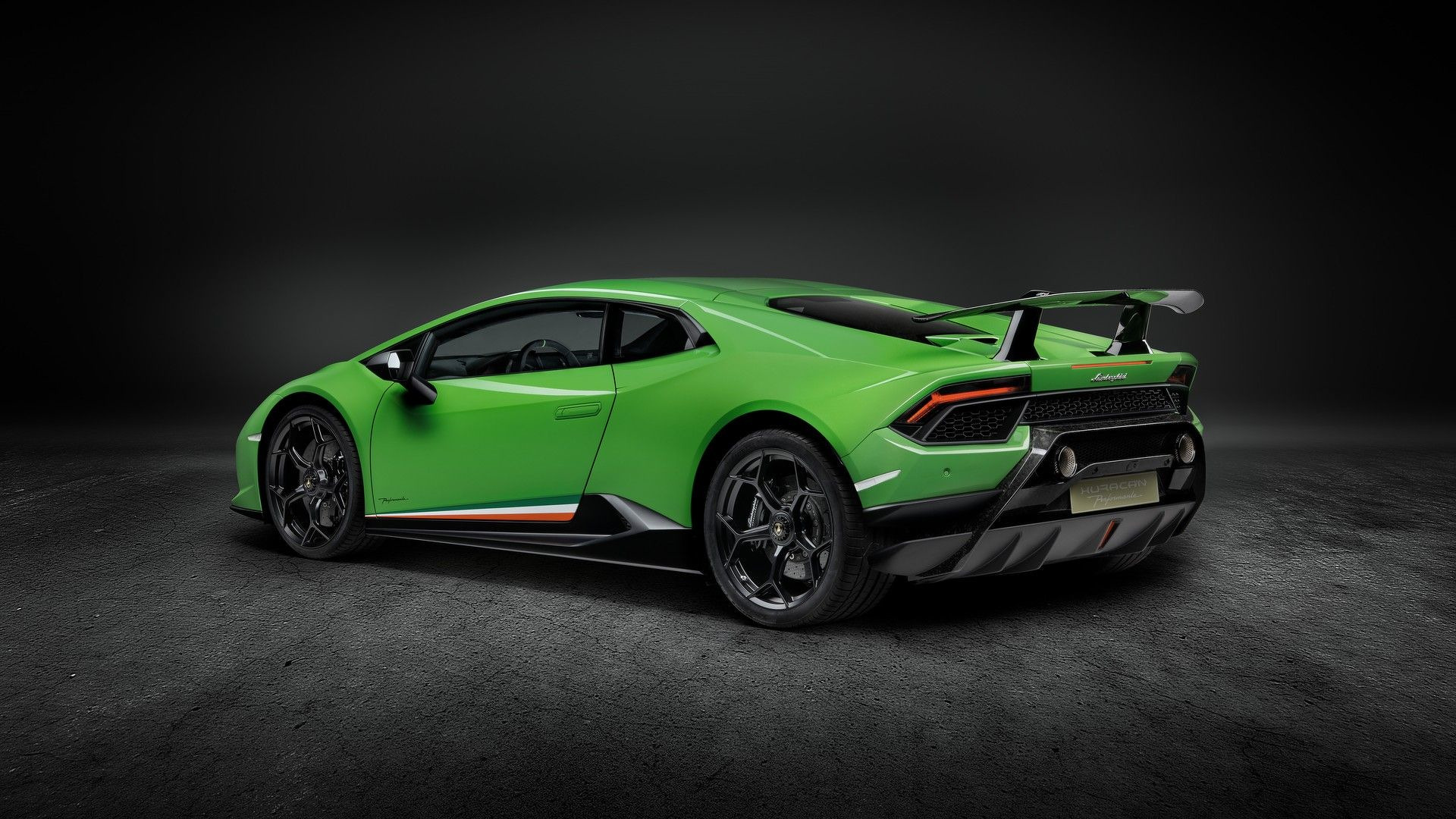 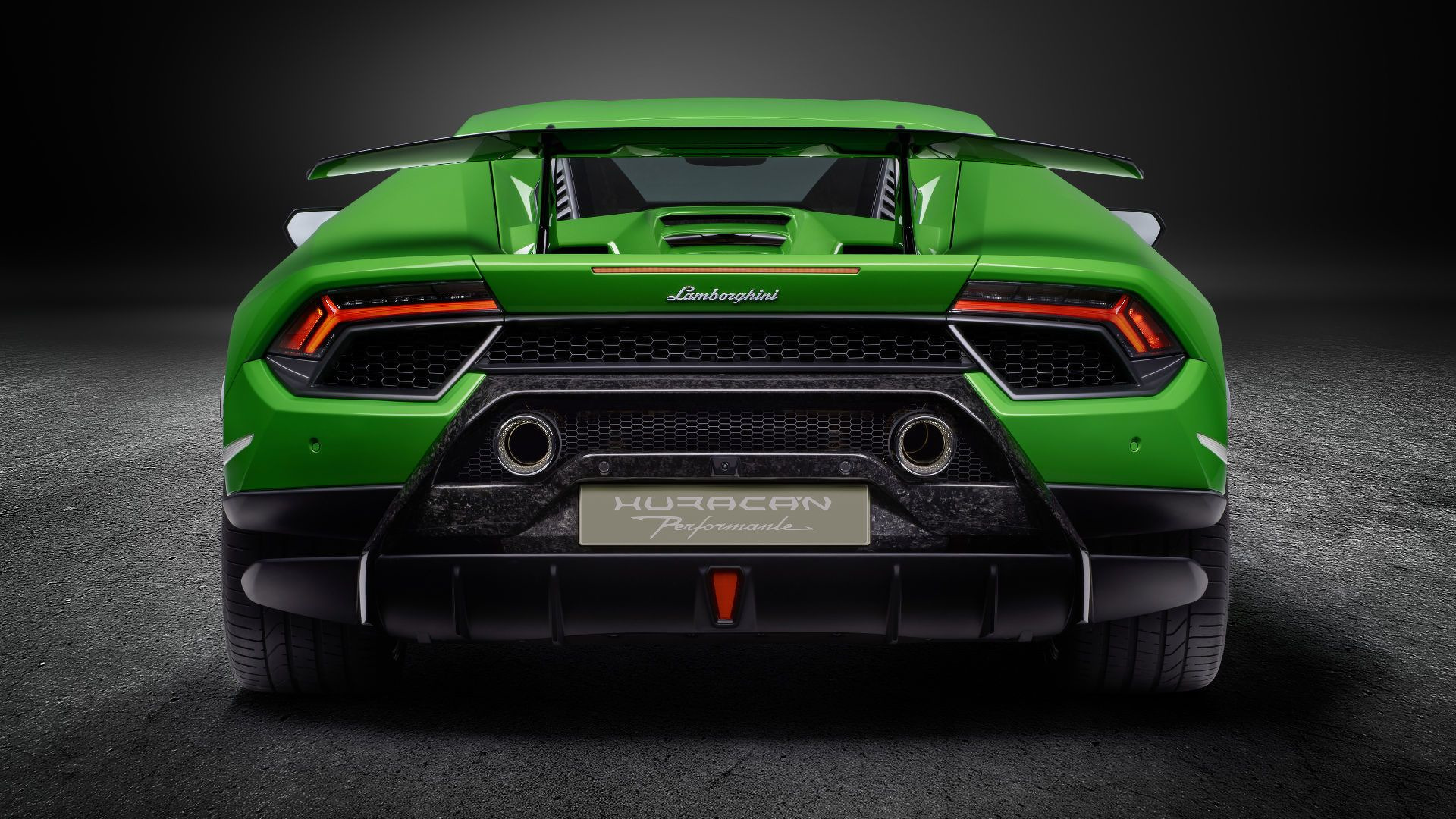 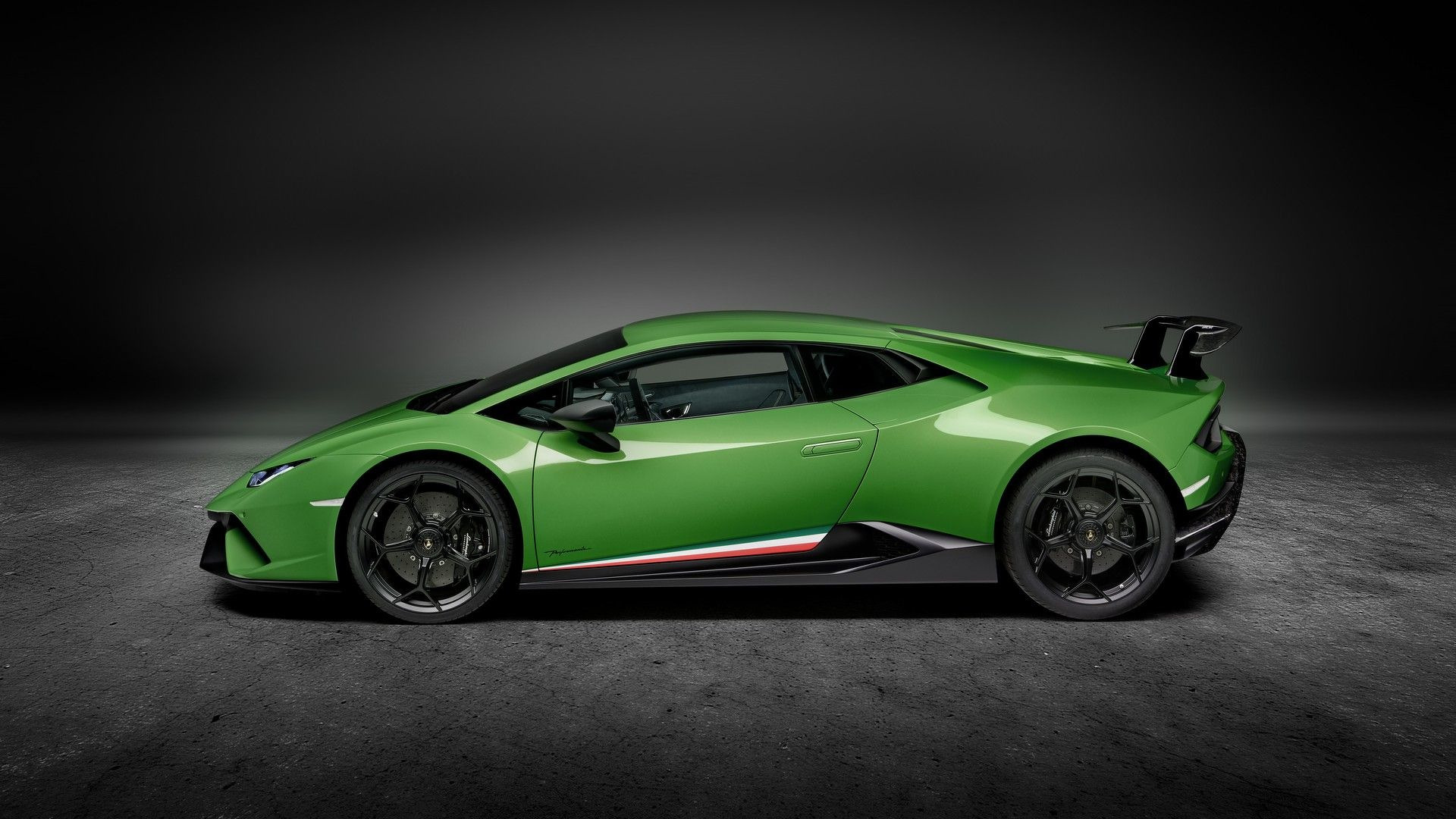 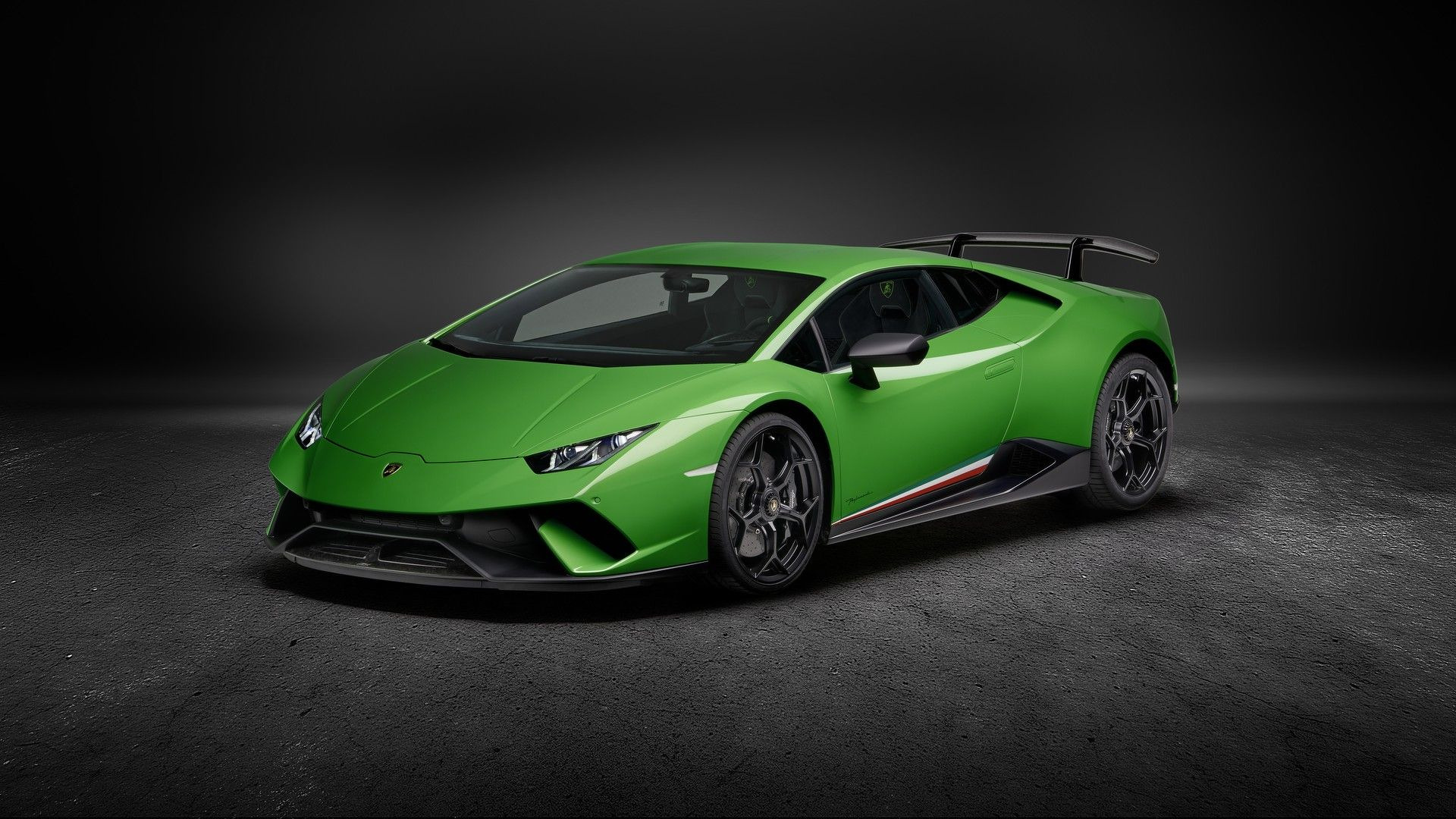