Skoda is working on the 4th generation Fabia hatchback that is expected to shed its camouflage in the not too distant future. While that happens, we’ve some bits of information on this upcoming supermini. In case you’re wondering, the special camouflage is apparently an abstract artwork by designer Daniel Petr. He says that it was inspired by reptiles.

The basis of the idea was that we imagined the car being revealed gradually, like a snake shedding its skin. Beneath the camouflage layer, there are also plastic parts that conceal some new elements of the body. It’s going to be a very good-looking compact car with a clean and modern design that will raise the Fabia to the next level. – Petr

Despite a super busy-looking camo, we can still figure out its evolutionary styling. Anyway, the 4th generation Fabia sits on the MQB-A0 platform that underpins several modern VW Group cars including the Mk6 Polo, T-Cross and Scala. Compared to the outgoing model, the new Fabia is 4,107 mm long (+110 mm) and 1,780 mm wide (+48 mm) excluding mirrors. Its wheelbase has grown by 94 mm to 2,564 mm. The boot has grown to 380 litres. Skoda claims that despite increased dimensions, the engineers have managed to keep the weight almost unchanged.

Features in the cabin include a USB-C connector in the central rear-view mirror and a large multifunctional pouch beneath the luggage compartment shelf. The pouch according to Skoda, can bear weight up to 3.5 kg (7.8 lbs) and is an ideal place to put your coat, for example. Old favorites like the ice-scraper in the fuel tank cap and a parking card holder by the A-pillar on the driver’s side have been retained. Options include the Travel Assist package, which brings automated driving functions. Passive safety includes a total of 9 airbags. 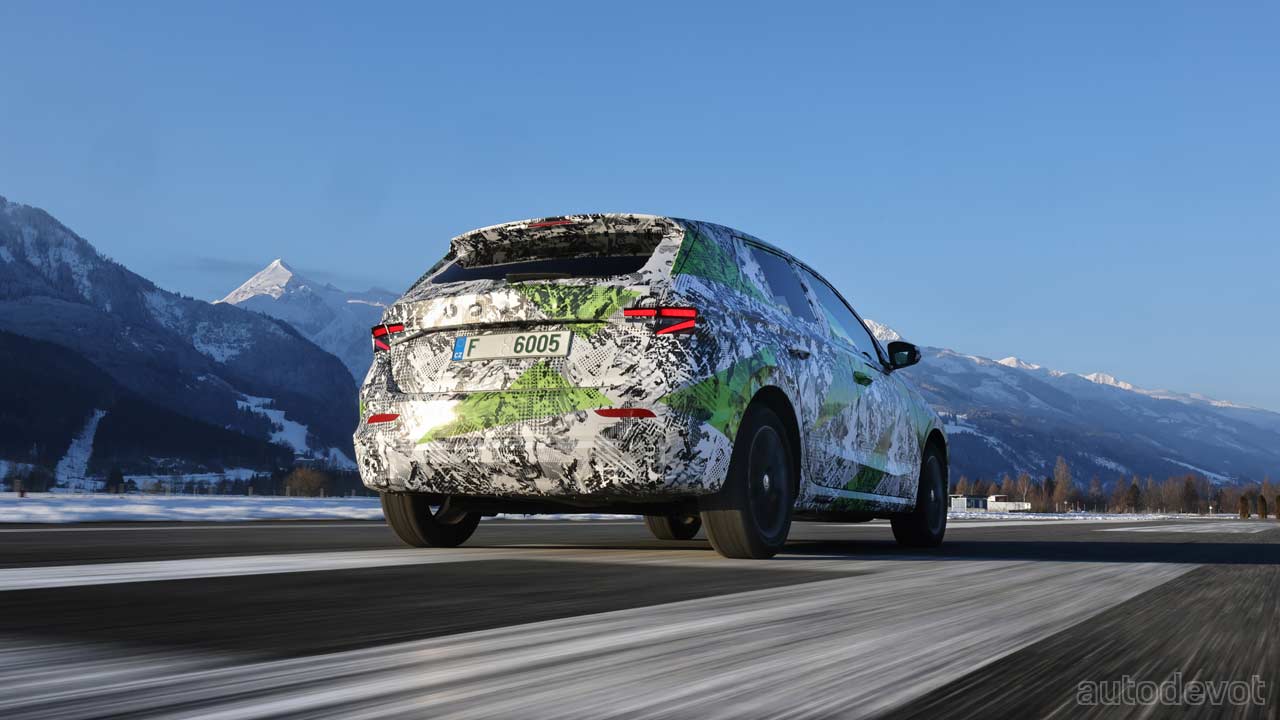 Powertrains
As for the powerplants, there’ll be 1.0L MPI and 1.5L TSI petrol options. The base setup with a 1.0L 3-cylinder naturally aspirated engine will offer either 48 kW (65 metric hp) or 59 kW (80 metric hp) outputs and are hooked up with a 5-speed manual gearbox. The next step up comprises two supercharged 3-cylinder TSI engines, one delivering 70 kW (95 metric hp) with a 5-speed manual gearbox and the other 81 kW (110 metric hp) with either a 6-speed manual or 7-speed DSG automatic. The range-topping powertrain will be a 1.5L TSI engine with 110 kW (150 metric hp) output, paired with a 7-speed DSG automatic as standard.