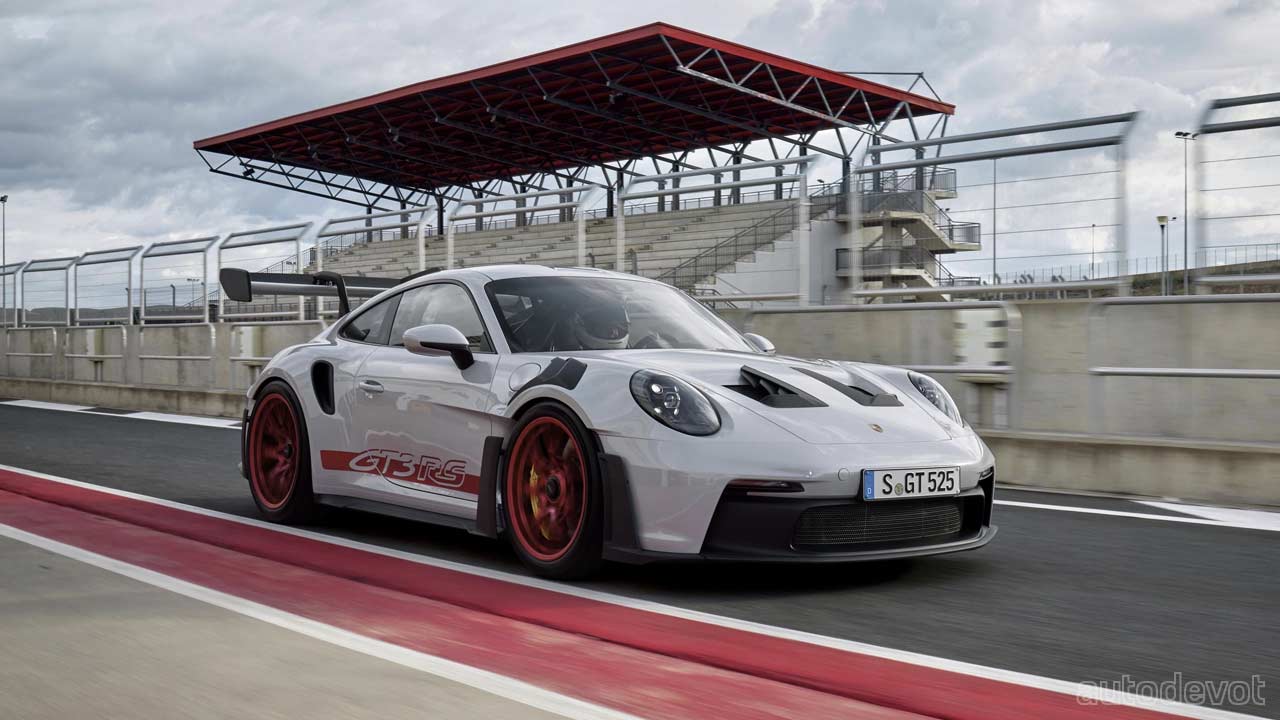 It appears that Porsche’s GT division has really gone bonkers this time around for the new 911 GT3 RS, but hey, it’s all in the quest of making the best-ever 911 GT3 RS, which I guess justifies every single thing you see on the car. But anyway, order books are already open depending on the market, with retail pices starting at €229,517 in Germany and $223,800 in the U.S. 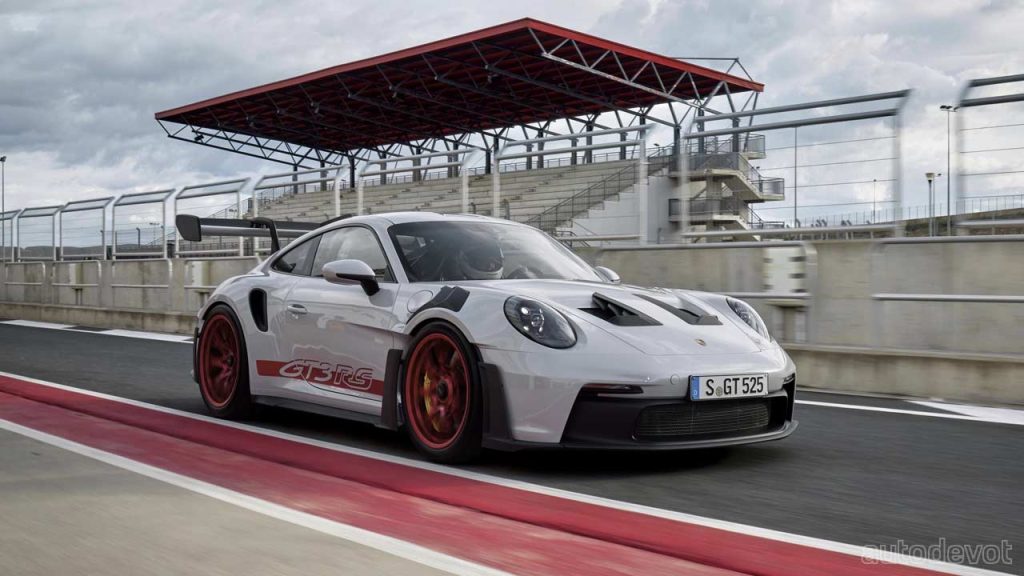 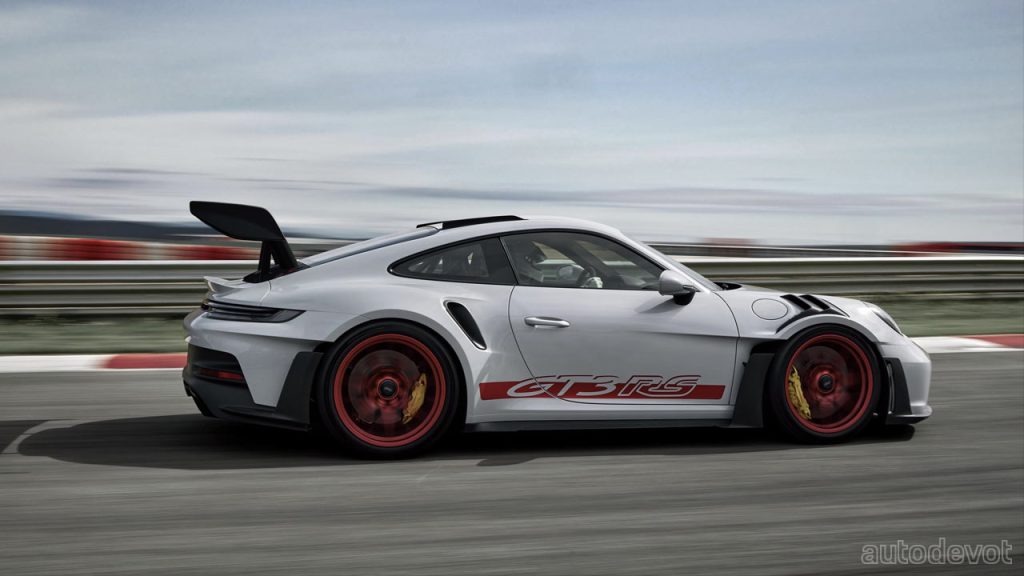 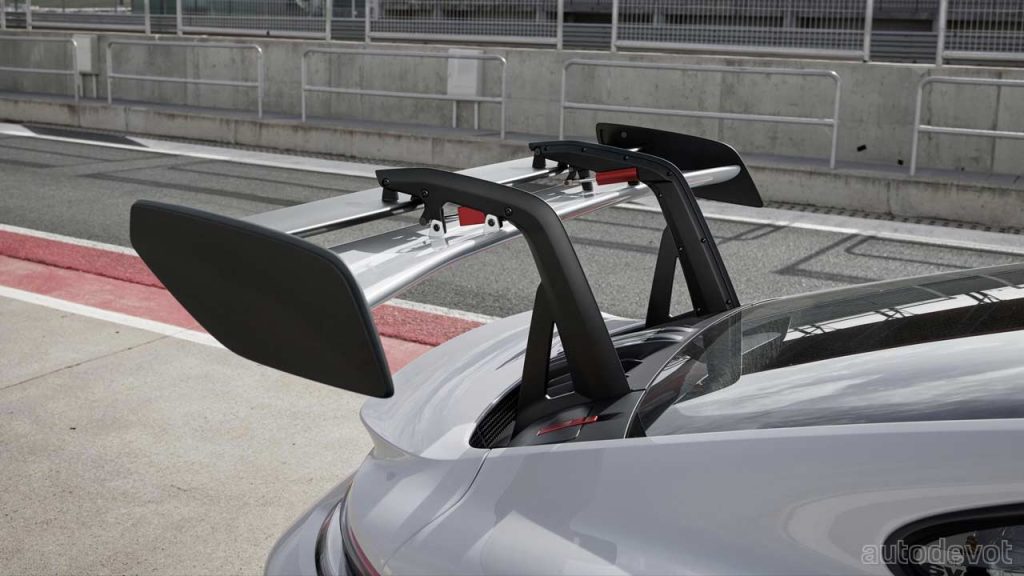 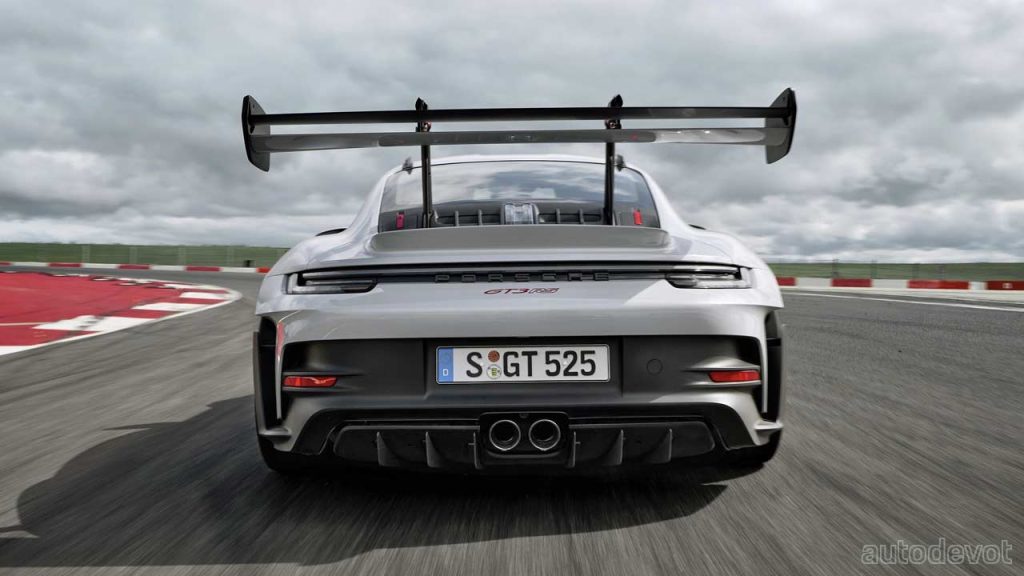 So, where do we even begin then? I guess that wing is drawing too much attention, so let’s begin there, shall we? While it still has the swan-neck-type supports as those in the “regular” 911 GT3, it is kinda double-decker here, and as you can probably tell, the upper part is hydraulically adjustable. To cut down drag on straight sections of the track, the DRS (Drag Reduction System) allows the wings to be flattened out at the push of a button and within specific operating speeds. 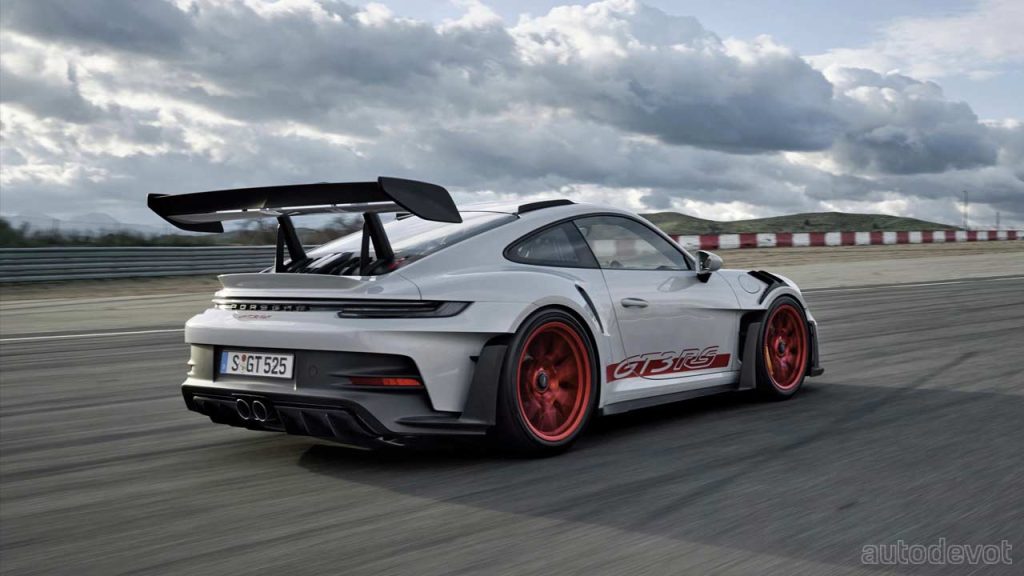 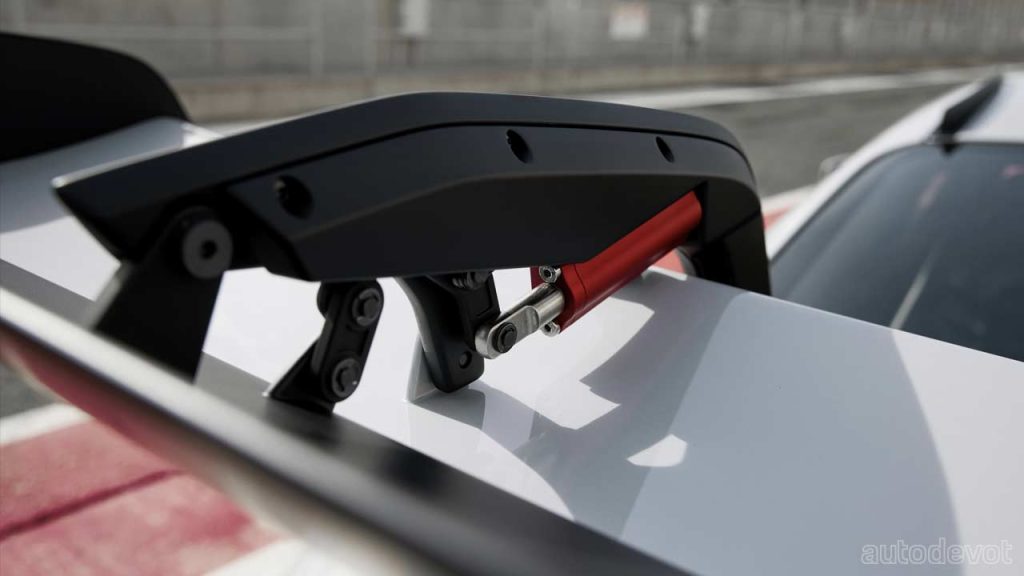 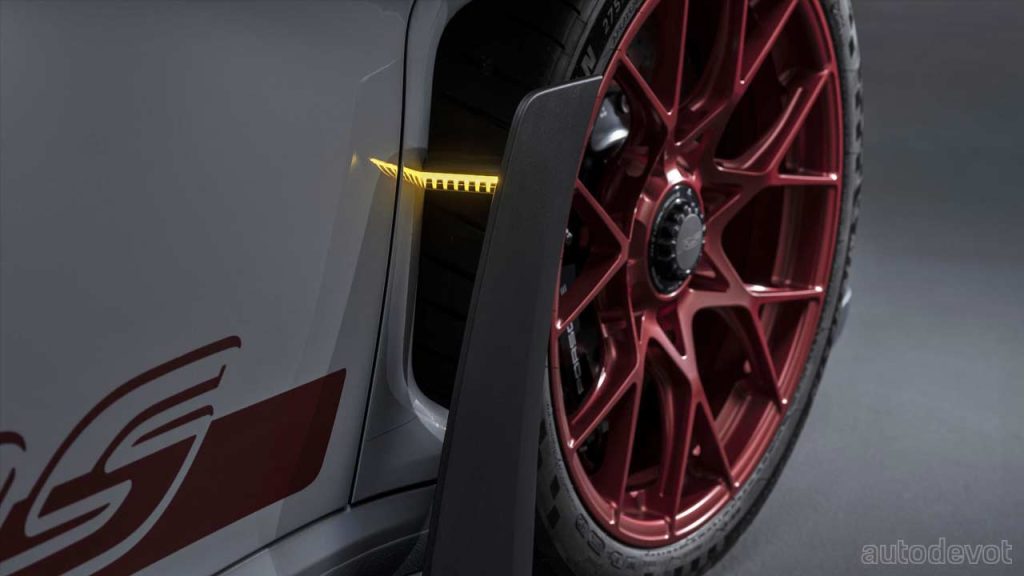 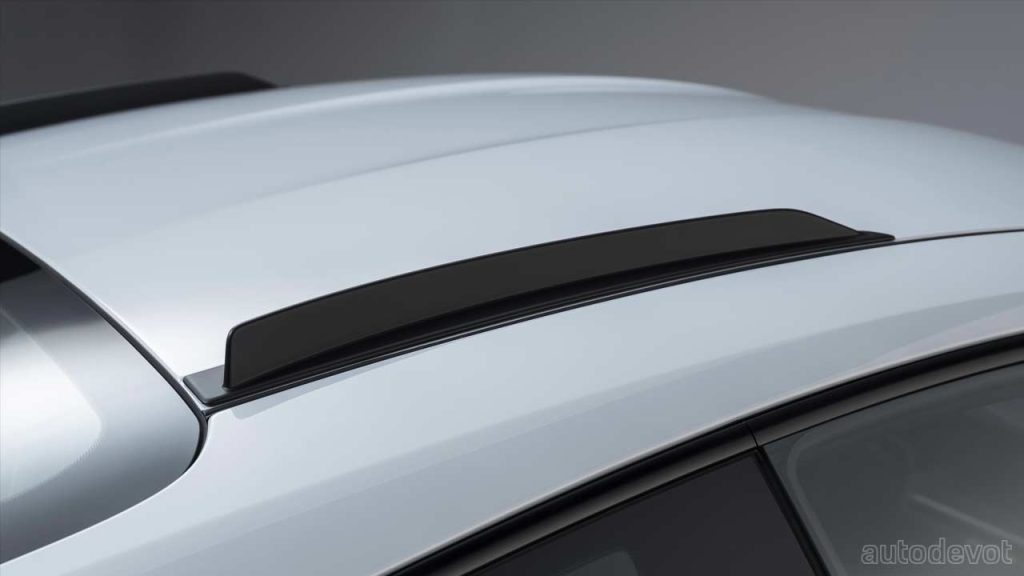 And of course, the wing also acts as an airbrake during emergency braking at high speeds; the movable part is set to maximum angle to support the wheel brakes. Also, for the first time on a Porsche production model, the upper edge of the rear wing is higher than the car’s roof.

The aero elements throughout the car are significantly different than those on the 911 GT3. There are sideblades, louvers on the front wings/fenders, and there are even fins on the roof to ensure cooler intake temperatures at the rear. In all, the aero elements are claimed to offer a downforce of 409 kg (902 lbs) at 200 km/h (124 mph). This means that the new 911 GT3 RS generates twice as much downforce as its 991.2-generation predecessor and three times as much as the current 911 GT3. At 285 km/h (177 mph), total downforce is 860 kg (1,896 lbs).

Another key highlight of the new 911 GT3 RS is so-called central radiator concept, which was first used in the Le Mans-winning 911 RSR and subsequently in the 911 GT3 R. Instead of a three-radiator layout seen in the previous cars, the new 911 GT3 RS relies on a large, angled centre radiator on the car’s nose. Meaning, you’ll sacrifice that tiny luggage compartment you might find on other 911 models. This sacrifice has also made it possible to use the freed up space on the sides to integrate active aero elements. 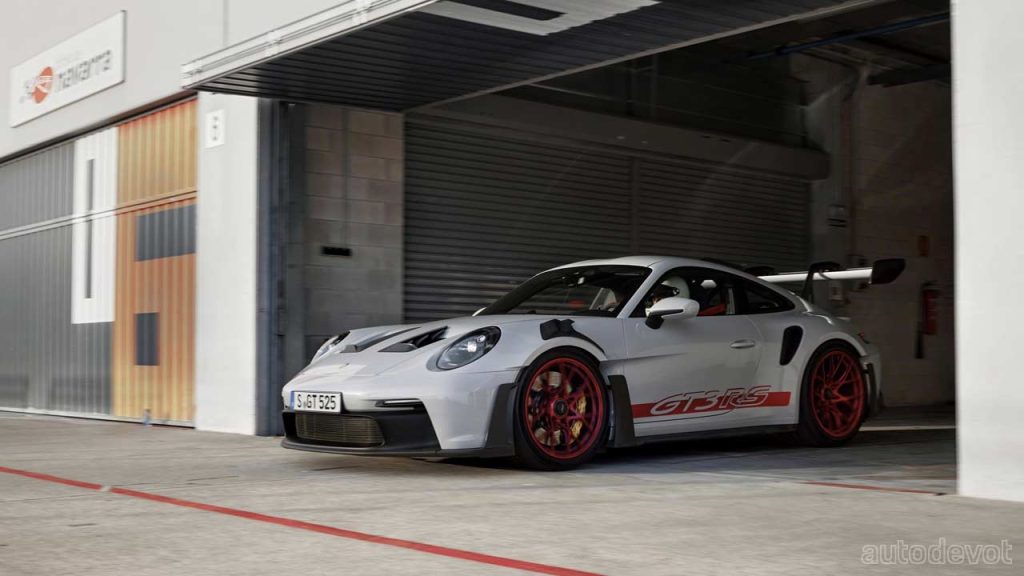 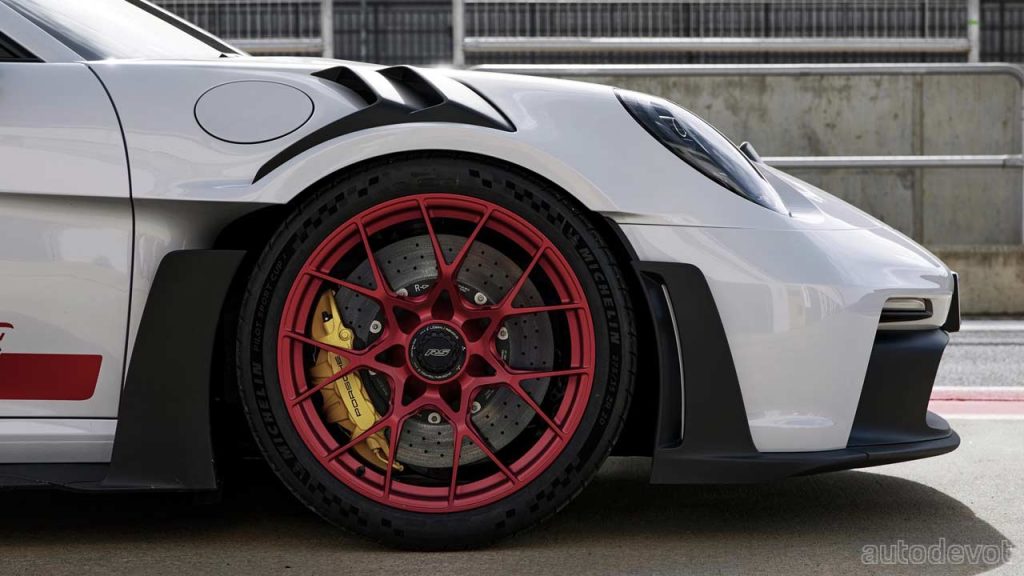 Let’s talk about the suspension then, shall we? The new 911 GT3 RS gets a track-focused setup, obviously. In Track mode, among other settings, the rebound and compression damping of the front and rear axles can be adjusted separately and in several stages.

Because the wheel arches of the new 911 GT3 RS are subject to powerful airflows, the components of the double-wishbone front axle are designed with teardrop-shaped profiles. These aerodynamically efficient links are said to increase downforce on the front axle by around 40 kg (88 lbs) at top speed and are otherwise only used in high-end motorsport applications. Because of the wider track (29 mm wider than the 911 GT3), the double-wishbone front axle links are also correspondingly longer. 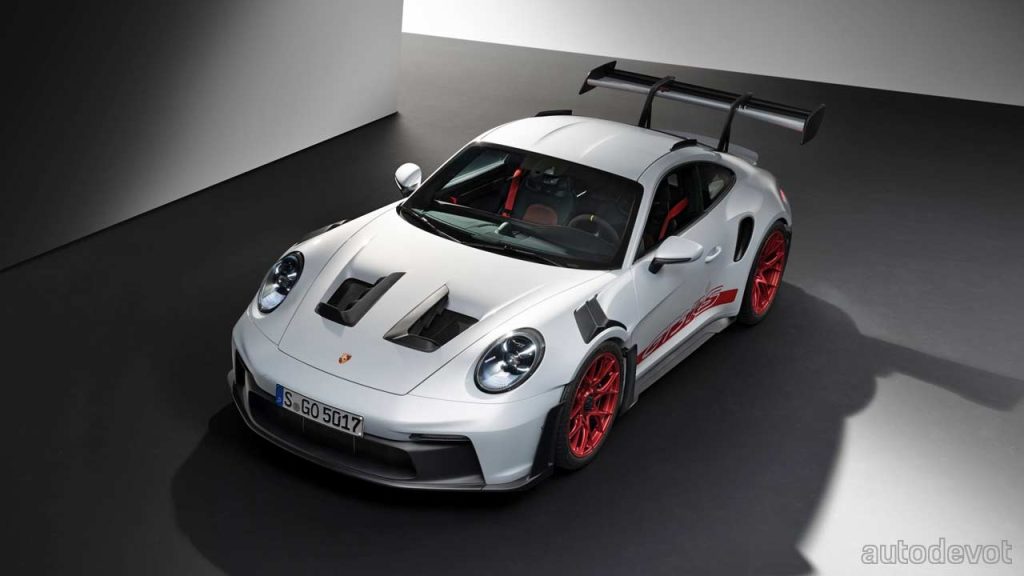 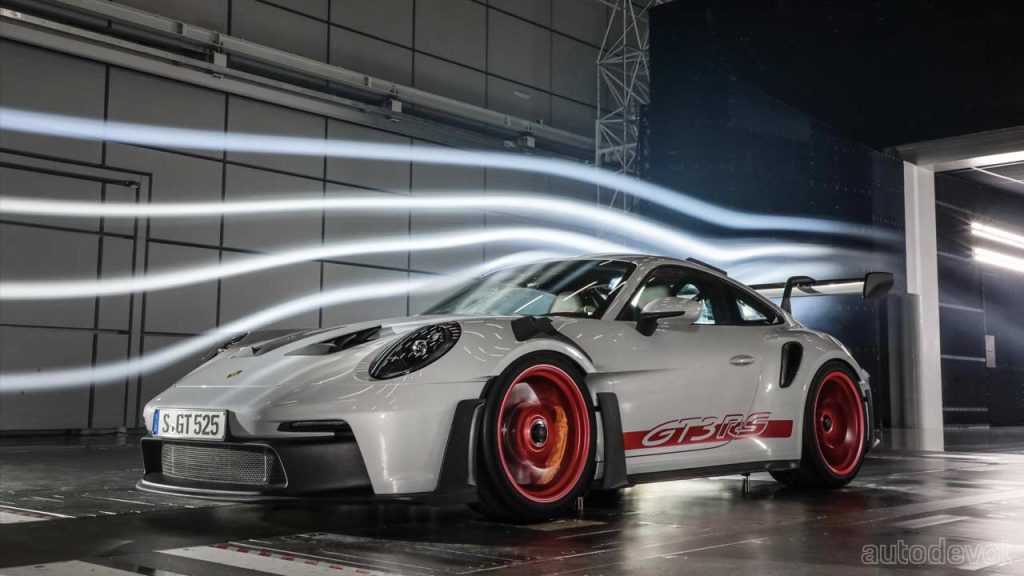 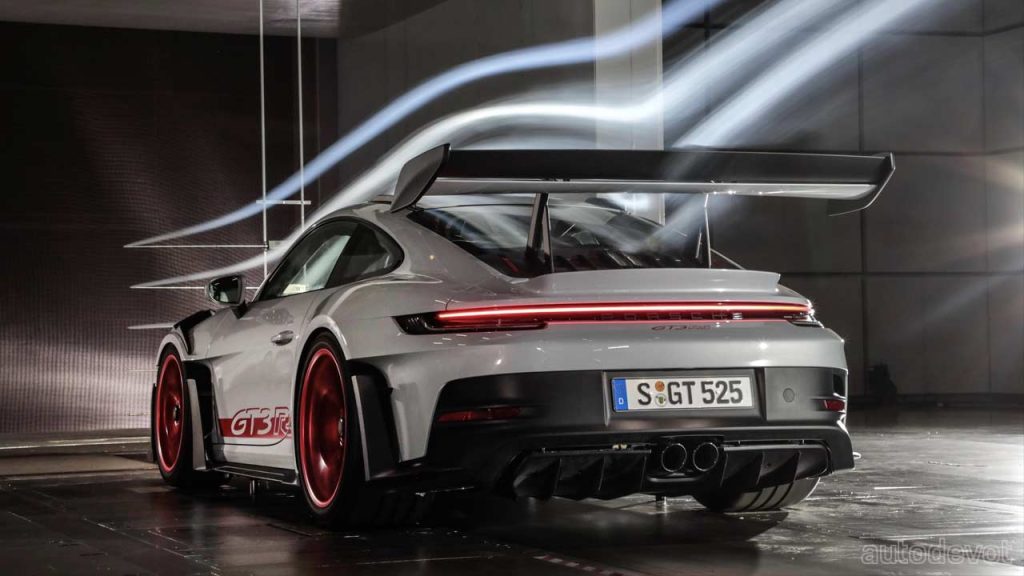 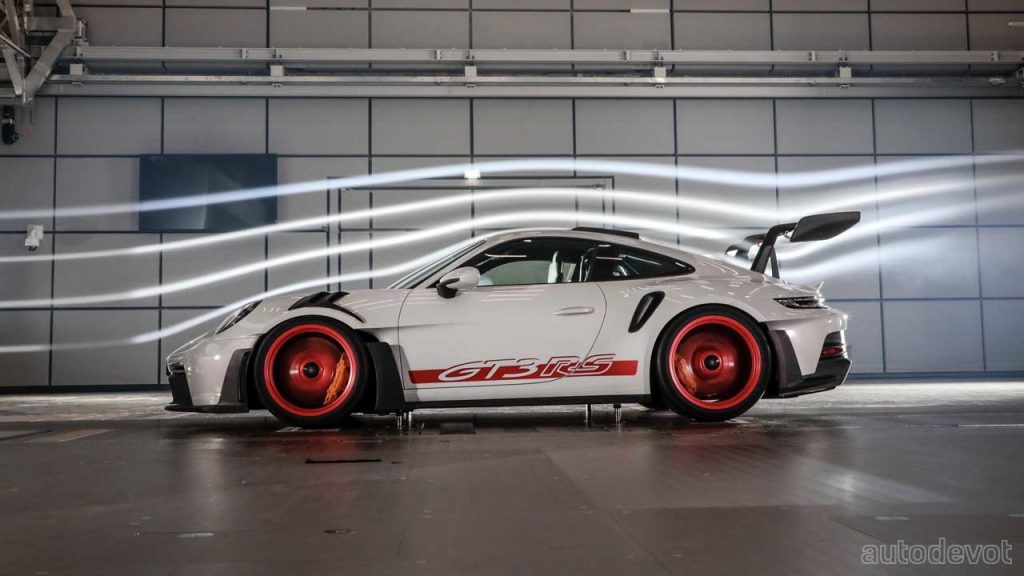 To ensure that the downforce balance between the front and rear axles is maintained even when braking from high speeds, the suspension engineers have significantly reduced pitching under braking, Porsche said. The front ball joint of the lower trailing arm has been set lower on the front axle. The multi-link rear axle has also been adjusted, with modified spring rates. The driver assistance systems and rear-axle steering also have an even more dynamic setup here. 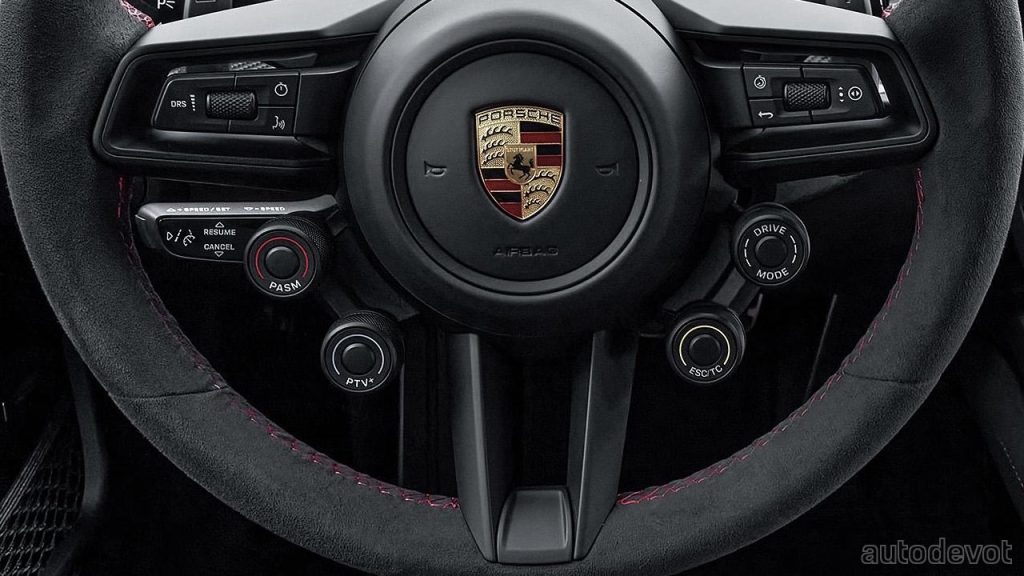 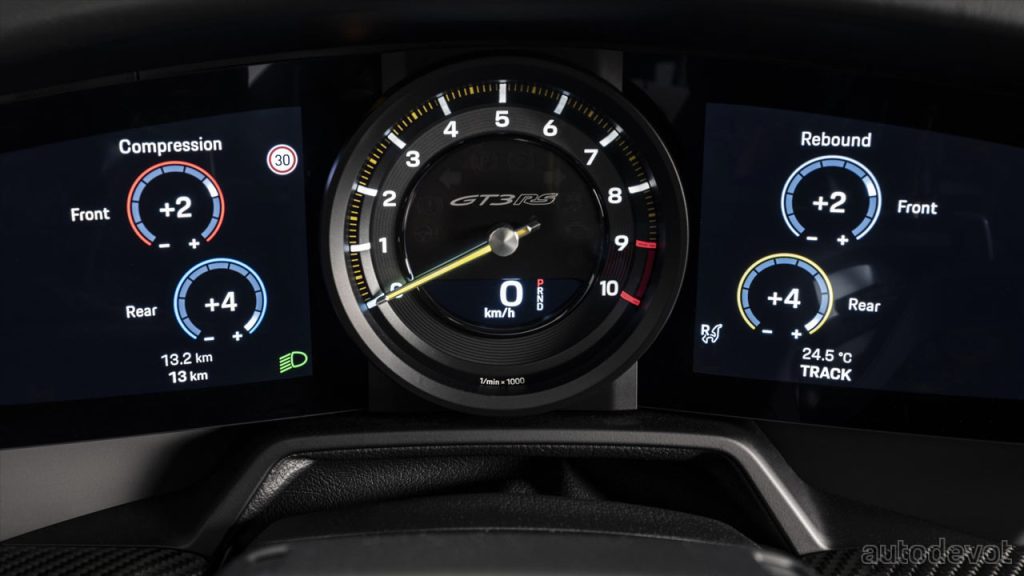 Braking duties are handled by standard discs measuring 408 mm at the front and 380 mm at the rear, gripped by 6-piston and 4-piston calipers, respectively. And of course, Porsche Ceramic Composite Brake (PCCB) discs are optionally available with 410 mm on the front axle and 390 mm on the rear axle. The car rides on forged light-alloy centre-lock wheels measuring 20-inch at the front and 21-inch at the rear, wrapped with road-legal sports tyres. 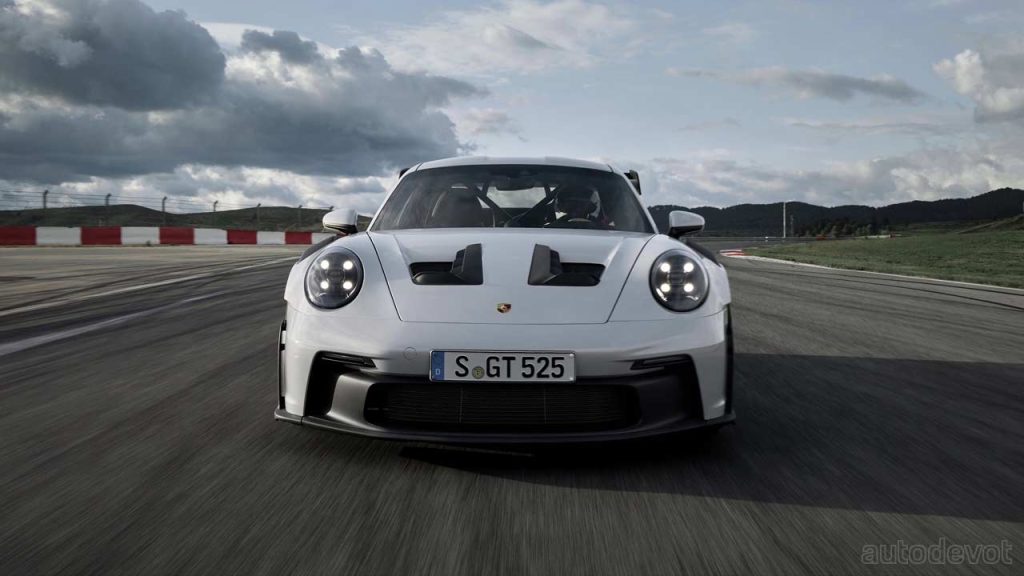 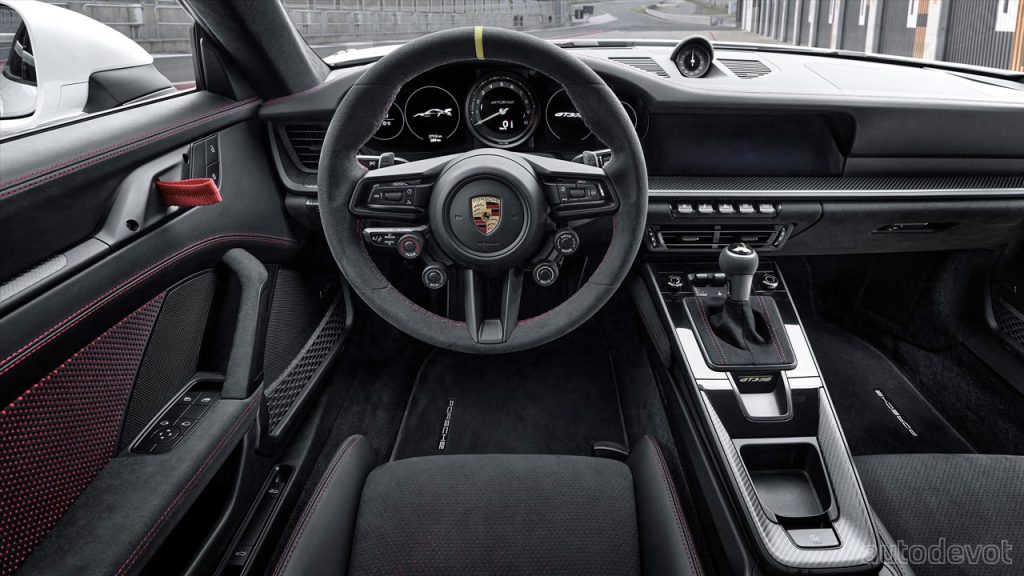 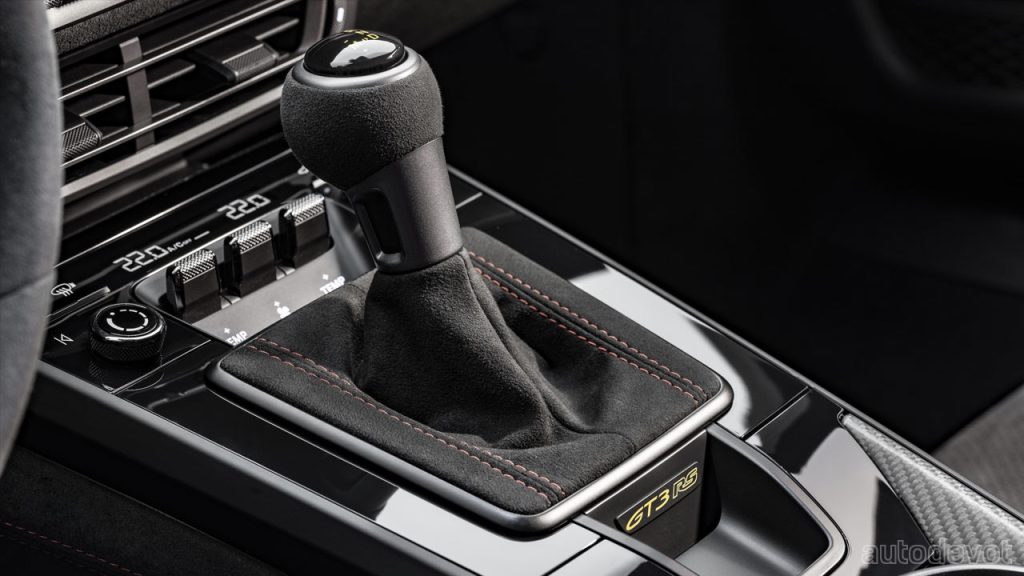 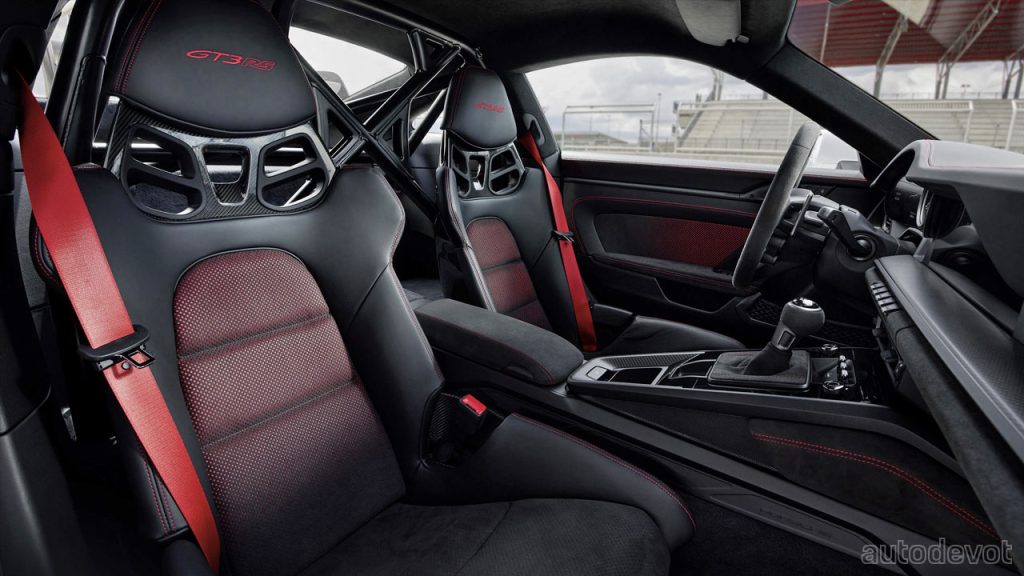 And thanks to lightweight construction with extensive usage of CFRP both on the outside and inside, the new 911 GT3 RS is claimed to weigh (kerb) in at 1,450 kg (3,197 lbs). The doors, front wings, roof, front lid and standard full bucket seats, for example, are made from CFRP.

The no-cost Clubsport package gets you a steel roll cage, a hand-held fire extinguisher and a six-point harness for the driver. If you buy the Weissach package, the front lid, roof, parts of the rear wing and the upper shell of the exterior mirrors feature a carbon-weave finish. Plus, the front and rear anti-roll bars, the rear coupling rods and the shear panel on the rear axle are made of CFRP. The roll cage, made from CFRP for the first time, is claimed to save around 6 kg (13.2 lbs) compared with the aforementioned steel version.

Another highlight of the Weissach package is the PDK shift paddles with motorsport-derived magnet technology. These are said to make gear changes even more dynamic, thanks to a more precise pressure point and a clearly perceptible click. An option within the Weissach package is magnesium forged wheels, which save another 8 kg (17.7 lbs).

Moving on to the juicy bits of the story then, the new 911 GT3 RS packs a tweaked version of the 4.0-litre naturally aspirated six-cylinder boxer engine found in the 911 GT3. The power output is 386 kW (525 metric hp) here, thanks to new camshafts with modified cam profiles. The single-throttle intake system and the rigid valve drive are derived from motorsport. Also, the 7-speed PDK has a shorter overall gear ratio than in the 911 GT3. The official 0-100 km/h (62 mph) sprint time is 3.2 seconds and the top speed is 296 km/h (476 mph).