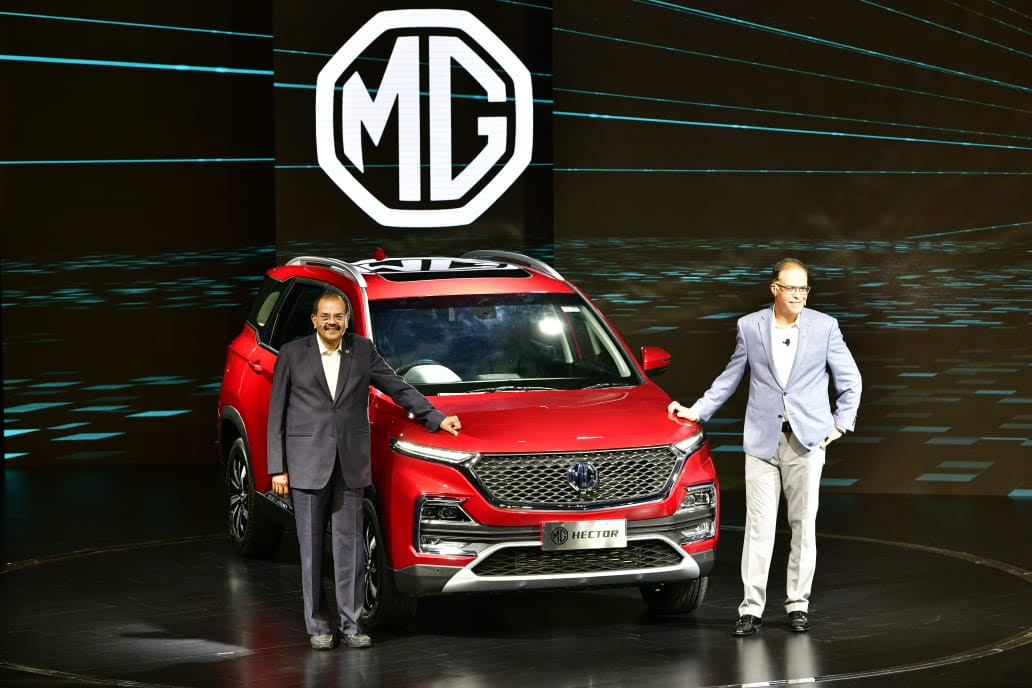 The much-anticipated MG Hector has been officially revealed to the Indian media today, and it’s time to take a look at the variants and features on offer. For those who are wondering, the Hector gets its name from a Greek mythical hero and is also a nod to the 1930s Hawker Hector of the Royal Air Force.

As mentioned in the previous story, the MG Hector is based on the Baojun 530 that was developed by SAIC-GM-Wuling JV. The compact crossover is also sold as the new generation Chevrolet Captiva in some markets. Now that the introduction is out of the way, let’s take a quick look at the design changes, which aren’t that many. At the front, there’s a new grille with honeycomb pattern, and different headlamp internals. At the rear, the taillight detailing is different too and are connected by a red insert; the skid plate design is different as well. The alloy wheel design is the same as on the Baojun 530. Inside, a 10.4-inch portrait-style HD touchscreen with connected car technology has become a big talking point for MG Motors. The company goes on to call the SUV as “India’s first internet car”. Called iSMART, the system comes with Machine to Machine – M2M embedded 5G-ready SIM, which enables certain features of the car to be controlled and monitored via a mobile app. MG claims that the technology offers 50+ connected features. More on that here. As you’d expect, voice command is part of the iSMART technology too, activated by saying “Hello MG”. Watch the video below. Which then brings us to the business end of the story. The Hector is powered by a 1.5-litre turbocharged petrol engine that offers 143 hp and 250 Nm (184 lb-ft) of torque; paired with a 6-speed manual transmission or a 6-speed DCT.  Apparently, the DCT has been tested extensively under extreme climatic conditions globally for more than 2.6 million km.

There’ll also be a mild-hybrid variant on offer with the aforementioned petrol engine. The 48-volt system performs idle start/stop, regenerative braking, and E-Boost functionalities. When required, the lithium-ion battery helps provide extra torque assistance of up to 20 Nm (15 lb-ft). MG claims that this variant reduces emissions by up to 12%. The mild-hybrid variant gets a 6-speed manual transmission. Diesel lovers will get a 2.0-litre turbocharged unit that offers 170 hp and 350 Nm (258 lb-ft) of torque, paired with a 6-speed manual transmission. In all variants, power is sent to the front wheels.

The SAIC-backed MG Motor has invested Rs 2,200 crores so far to rebuild the Halol manufacturing facility and to roll out the Hector. Female employees already account for 31% of the company’s total workforce of 1,200 employees. MG said that the company will begin shipping the Hector within the next few weeks to its network of 120 outlets across 50 cities. The carmaker aims to expand its network to 250 outlets by the end of September this year. Pre-bookings will begin in June. “The MG Hector, as India’s first internet car, has been built with a high level of localization and comes power-packed with features, inside-out. As MG’s first offering in India, the Hector demonstrates our commitment to provide the best cars to Indian customers, that they love and appreciate,” said Rajeev Chaba, President & Managing Director, MG Motor India.